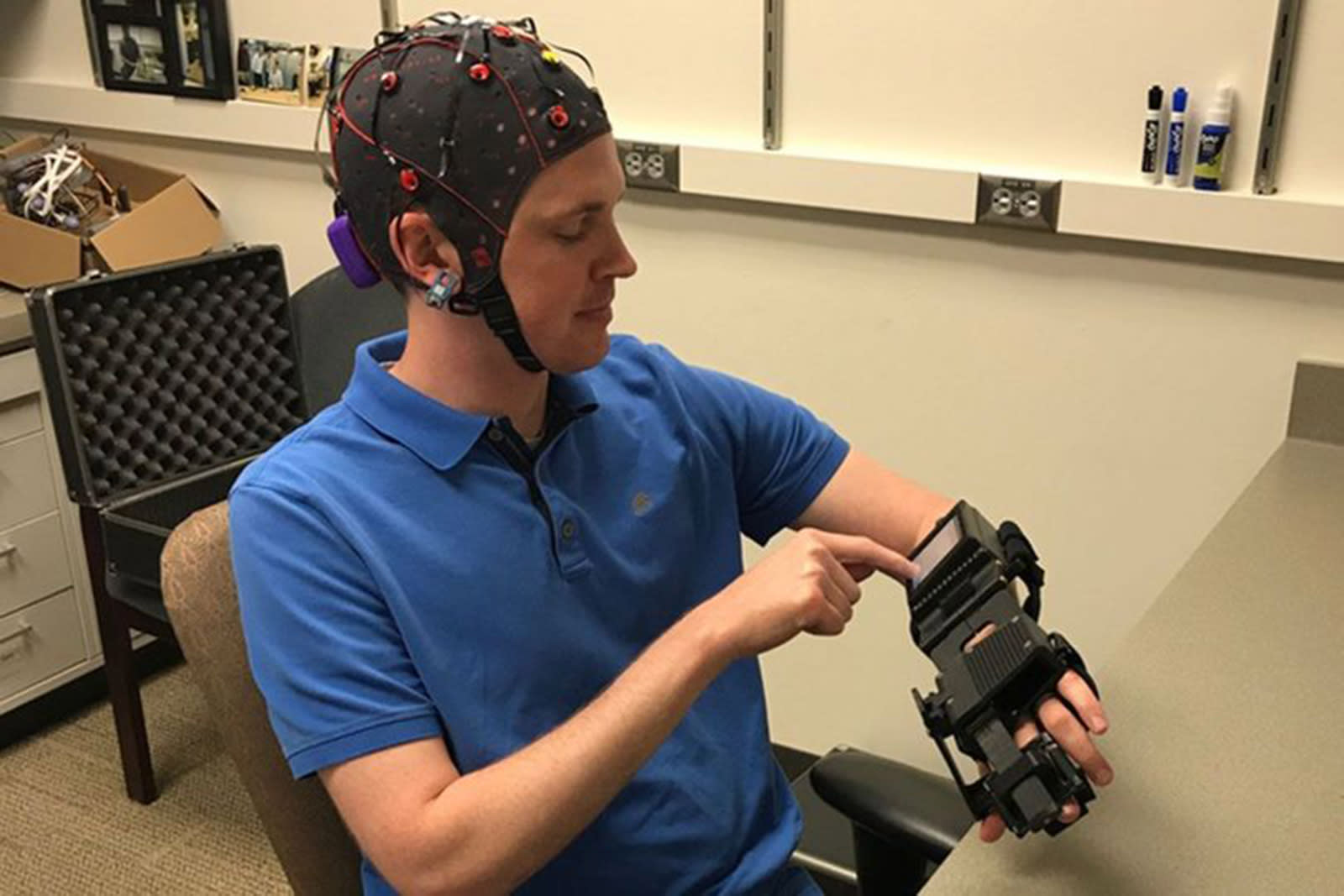 A team of scientists from the Washington University School of Medicine in St. Louis have proven that the mind-controlled device they developed can help stroke survivors regain control of their hands. Stroke typically causes paralysis on one side of the body, leaving patients nearly or completely unable to move some of their limbs. They can regain some voluntary movements after years of therapy, but the team's device called Ipsihand could help make their rehabilitation go faster. For their study, the researchers asked 13 people who had a stroke six months or more in the past to wear the bionic hand and a cap with electrodes on their head.

The cap picks up on the user's intention to open or close the paralyzed hand, the computer it's attached to amplifies those signals and the Ipsihand follows those commands. So, how does the technology work? It's based on what David Bundy, the lead author of the team's paper published in the journal Stroke, discovered a decade ago. See, the parts of the brain that control movements are located on the other side of the limbs you want to move. If, say, you want to close your left hand, it's the right part of your brain that does the work. That also means that a stroke survivor who can't control his left arm and leg sustained damage on the the right side of his brain.

Bundy and neurosurgery professor Eric Leuthardt, however, found out that the electric signals that indicate movement first appear on the side of the limb you want to move. Those signals are responsible for activating the other side of your brain, which causes the actual movement. In stroke patients, the initial signals get lost in the ether, since the part it's trying to activate doesn't work anymore. That's where Ipsihand comes in.

Out of 13 subjects, 10 were able to finish 12 weeks of testing, picking up blocks and building towers, fitting tubes around smaller tubes and moving their hands to their mouths. Their scores improved by an average of 6.2 points on a 57-point scale. It doesn't sound like much, but as Leuthardt said, it could be "the difference between being unable to put on their pants by themselves and being able to do so."

During those tests, the team found that patients improved based on how well the system read the signals from their brains. The more the researchers improve its capability to pick up signals, the better Ipsihand will be at helping survivors move their hands again.

In this article: applenews, ipsihand, medicine, mind-controlleddevice, stroke, tomorrow, WashingtonUniversityInSt.Louis
All products recommended by Engadget are selected by our editorial team, independent of our parent company. Some of our stories include affiliate links. If you buy something through one of these links, we may earn an affiliate commission.