If you’re happy staying in the city, it’s an enjoyable ride.

For other riders, an electric motorcycle is a two-wheeled invitation to talk. It's the lack of sound that initially tips them off. They always ask about range and speed. But mostly range. How far can they ride before they would have to plug in? With the new Zero Motorcycles DS 6.5, it's a conversation that requires explaining a few caveats about its 67 mile in-city range (it has a smaller battery so it's cheaper and lighter). Surprisingly, they get it. 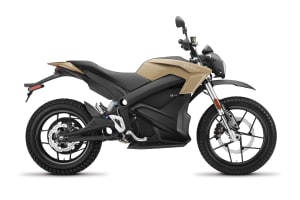 The Zero DS 6.5 is the motorcycle company's attempt to find a middle ground between the 147-mile range 13kWh DS and its thrilling (but requires an experienced rider) FX and FXS line. Electric bikes are already more expensive than their gas-powered counterparts, so if they can shave $3,000 off the price of a DS by cutting its battery in half, maybe more people would be interested. It's a financial compromise that on paper looks like a rather boring bike thanks in part to the reduction in horsepower. On the road though, the DS 6.5 is just as enjoyable as its more powerful sibling. In some cases, more so.

The biggest difference between the 13 and 6.5 is the battery size, but the byproduct of that is that the 6.5 loses nearly 100 pounds. That weight saving is immediately apparent when you get on the bike -- it feels much nimbler. That translates to quicker maneuvers while navigating the obstacle-filled streets of San Francisco. The weight reduction also means that the drop in horsepower (the DS 13 has 60 while the DS 6.5 tops out at 37) isn't that noticeable. The 70 pounds of torque also help. The power is there whenever you need it -- just twist the throttle and go until you need to stop.

The 6.5 is equipped with anti-lock brakes that kept the bike from locking up the wheels even on the slightly moist roads in the Bay Area. Unfortunately (but really fortunately for me) I wasn't able to ride the bike in the rain to see how well it stopped in wet conditions. Soaked street test aside, the brakes felt solid and I felt confident each time I had to slam on them to stop from being killed by the growing number of inattentive drivers out there. Seriously, put your phone down and use a blinker before changing lanes.

The smaller battery and range only reared its head on a trip to Oakland that ended with me riding against a powerful headwind that sucked 25 percent of my power heading back over the Bay Bridge, leaving me with 15 percent power to get across San Francisco. I made it with power to spare, but it's a reminder that highway speeds and weather can take their toll on the battery. For the most part, I averaged about 55 miles between charges while riding in the city and mostly in sport mode instead of eco mode. I'm sure if I had decided to ride slower I could have gotten a bit closer to the rated 67 miles in the city. But if your commute involves a lot of high-speed cruising the rating plummets quickly to 47 miles riding in both the city and highway and 35 miles freeway only if you're riding at 70 miles per hour.

Like previous Zero bikes, the DS 6.5 can be charged directly from a standard 120-volt outlet without any special adaptors. It'll go from zero to fully charged in just over four-and-half-hours. It likely means an overnight charge but there is the option to add a level-two charging port like those found on electric cars to the bike. The optional $2,000 charge tank accessory supports all those EV charging stations that have been popping up and it drops the total charge time down to 1.4 hours. It's an expensive option, but if your access to wall sockets is limited, it might be worth the extra cash. That's where you have to make the decision about the DS 6.5. Yes, it's $3,000 cheaper than the 13kWH version, but it's still going to cost you $11,000 (not counting the Charge Tank). Meanwhile, the go-to DS -- the Kawasaki KLR 650 -- is just shy of $7,000. But while these bikes look similar, the KLR is an adventure bike. It's ready for long rides both on and off road. The Zero DS 6.5 is a city bike that is ready for some offroading, but in reality, the crumbling streets of San Francisco (and other cities) make the bike's off-road capabilities almost necessary for two-wheeled commuters.

The lack of a clutch, while initially odd, is also perfect for stop and go traffic and lane splitting (only in California). And there's another feature that will make commuters happy: That smaller battery opened up room for a storage area large enough for a trip to the corner market. That storage joins the lockable compartment that resides where the gas tank would usually be. Unless you get the $2,000 charge tank, that is.

So, the Zero Motorcycle DS 6.5 isn't going to take you on long mountain rides or trips through the desert regardless of its off-road capabilities. But what it will do is get you around an urban area where its suspension and high sitting position make it ideal for navigating our crumbling infrastructure.

Like other electric vehicles, the DS 6 is pricey, but various incentives (that vary from state to state and from county to county) will bring the price down. And if you factor in the gas and maintenance savings (no more oil changes!) it starts to make more financial sense. But more importantly, it's a joy to ride. It's not as exciting as the FXS, but not every ride needs to be a seat-of-your-pants extravaganza. Sometimes, you just need to get to work.