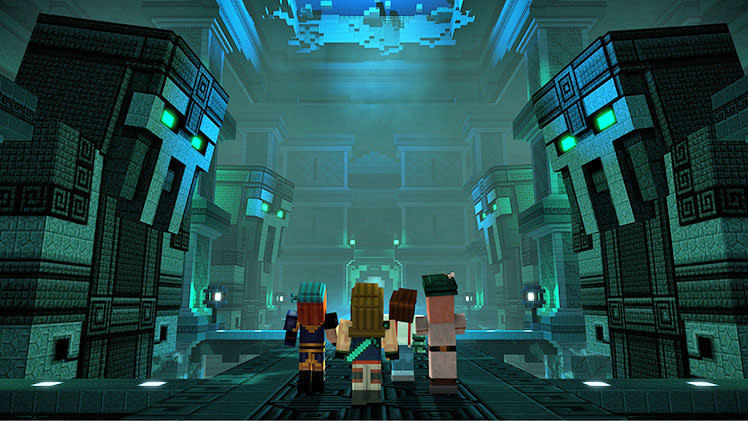 If you loved Minecraft's first Story Mode, there's more on the way: A second season of Story Mode is coming this summer. The first episode, called "Hero in Residence," will be on sale July 11th.

The first season of Minecraft: Story Mode consisted of eight episodes, which were released over the course of 2015 and 2016. Players took control of a character named Jesse and went on a quest with a band of allies in tow. Jesse is customizable; Patton Oswalt and Catherine Taber served as the male and female voices, respectively. Both actors are set to return for the second season, which features the same characters.

In the first season, the choices players made over the course of the game determined how the story progressed. Those decisions will be taken into account for the second season, though it's friendly to new Minecraft players as well. It appears that style of gameplay will continue through the new episodes, with the choices players make influencing the game's outcome.

It's worth noting that, while the first season of Minecraft: Story Mode is available on just about every platform you can think of, including consoles, the Apple TV and iOS and Android devices, it appears as this may not be the case for the second season. The release only specifically mentions Xbox One, PlayStation 4, PC, Mac, iOS and Android devices. It's not clear why some platforms are unsupported (especially considering Minecraft just launched on the Nintendo Switch in mid-May), but hopefully additional systems will be added closer to launch.

In this article: applenews, av, gaming, minecraft, storymode, videogames
All products recommended by Engadget are selected by our editorial team, independent of our parent company. Some of our stories include affiliate links. If you buy something through one of these links, we may earn an affiliate commission.