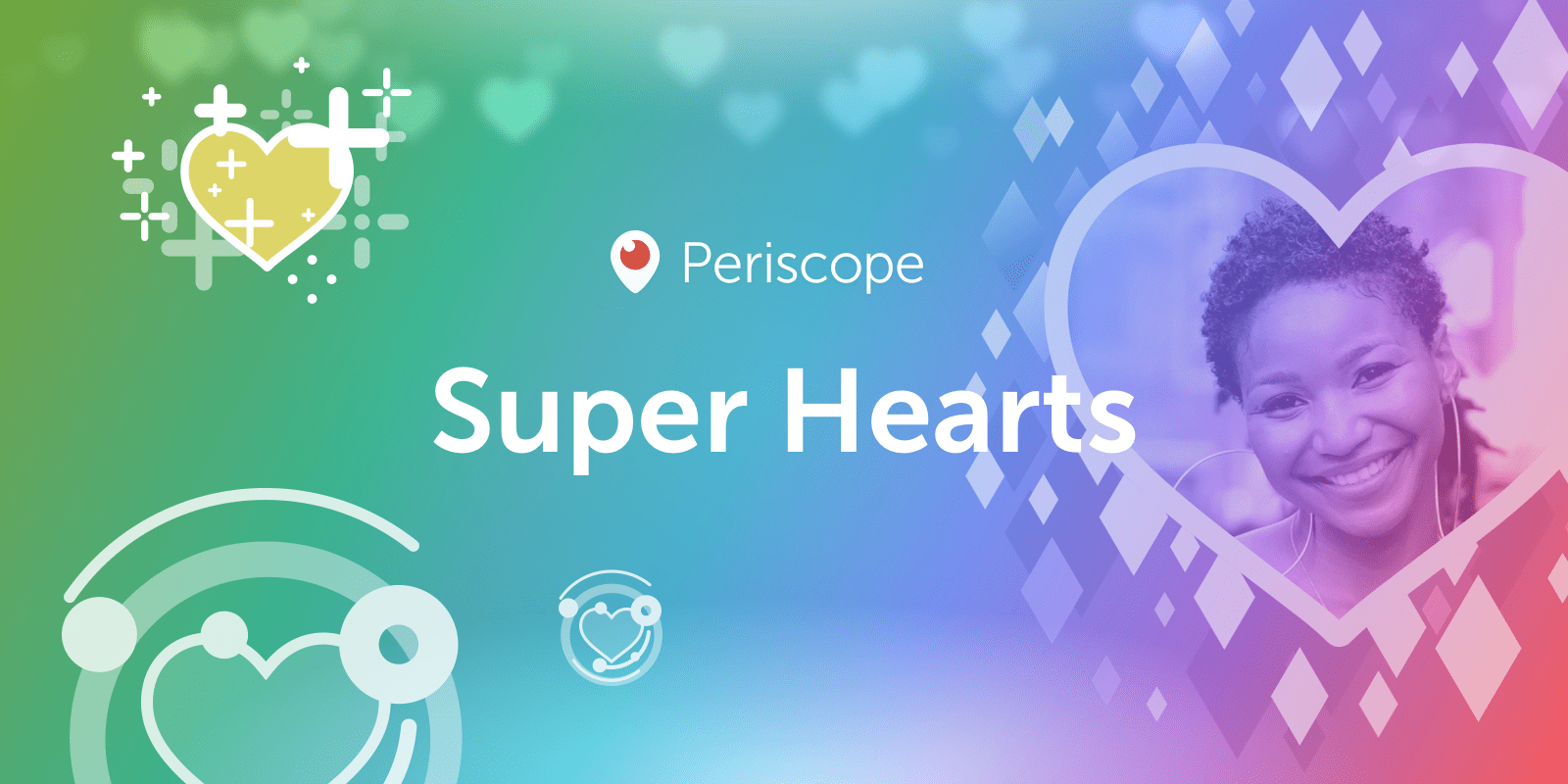 While Facebook is currently winning the livestreaming wars, rival Periscope has its fair share of devotees. The Twitter-owned service hosted 200 million broadcasts in 2016 and close to 77 million hours of live video in the first quarter of this year. Some Periscope broadcasters even draw huge crowds (Amanda Oleander, for example, is an LA artist with over 600,000 followers) with hundreds of hearts flooding the screen. Today, Periscope is announcing a new feature that rewards those broadcasters with more than mere likes. It's called Super Hearts, which are essentially fancy hearts that viewers pay for with real money in exchange for attention. But the real benefit is for broadcasters: Those Super Hearts could potentially turn into cold hard cash.

Here's the way it works. Starting today, Periscope users will see a Super Heart icon on every live broadcast. Tap it, and you'll see three different kinds of Super Hearts that you can choose to send. The cheapest is "sparkly", the next one up has a bubbly effect and has your profile avatar in it, and the most expensive Super Heart also has your profile avatar plus it looks like it's exploding diamonds. The hearts costs 33 "coins," 66 coins and 111 coins, respectively.

Coins, you say? That's Periscope brand new in-app currency, which you buy with real money. There are seven different pricing tiers; the more coins you buy, the deeper the discount. It starts at 1,050 coins for $0.99 and goes all the way up to 132,650 coins for $99.99. It's a model that many mobile gamers will likely find familiar.

Once you buy the coins, you can use them to send Super Hearts. Select the type you want, as well as how many you wish to buy, and then tap away at the Super Heart icon during the broadcast to show the streamer your love.

After you send your very first Super Heart, you'll see an automated shout-out that thanks you for sending it, which should help get the broadcaster's attention. Super Heart users will also get a heart-shaped flair in their comments so they get noticed even more. Everyone who sends a Super Heart will get added to a leaderboard, which you can peek at the bottom of the screen, so you can compete and see who's sending the most love. If that all sounds a little too much, broadcasters always have the option to toggle off Super Hearts in the settings.

But if you turn off Super Hearts, you won't get stars. That's right; in addition to seeing all these flying animated hearts and comments, broadcasters will also see a star count at the top of their screen. Each Super Heart has a star value; the more Super Hearts you get, the more stars you get. The star value of each Super Heart directly correlate to its coin value. So if a viewer spent 330 coins to get 10 Super Hearts and then sent them to you, those 10 Super Hearts would give you 330 stars. To clarify, coins are the purchase currency, while stars is the earned currency. According to Periscope, it did this to "avoid confusion," but clearly, it didn't succeed.

Along with introducing Super Hearts, Periscope is also launching a Super Broadcaster Program, which you're only eligible for if you meet the minimum requirement of 185,000 stars. You still have to apply to get in, but once you do, you'll have the opportunity to exchange your star balance for real cash money.

185,000 stars adds up to roughly $175 (it may be more or less, depending on transaction fees and so forth) and of course, you can always earn more by getting more stars. You can only cash out once per month, and that money will be directly deposited in your bank account. The program will launch in the US to start, but everyone in the world can start accumulating their star balance starting today. So by the time the application hits your part of the world, you could already be well on your way to being qualified.

That's okay, because the Super Broadcaster Program was partly a result of feedback Periscope received from its broadcasters. "We've been having exploratory conversations with many members of the community, especially the VIPs," said Annie Sultan, Periscope's community manager. "There's this desire for a new way to interact, but in a way that feels playful and very 'Periscope-y', that also provides support to the Periscopers."

"Super Hearts are a new way to monetize their content, but in a way that's authentic to us," she added.

Other live streaming platforms offer similar incentives; Twitch lets the audience tip livestreamers with Cheer emotes, while YouTube Live viewers can pay for pinned messages known as Super Chat. Of course, YouTubers (and some Twitch streamers) also have the benefit of ad revenue, which Periscopers do not. Seeing as how Twitter dropped the ball by neglecting the talent on Vine, it's encouraging to see the company look for ways to pay its valued Periscopers. Even if it is doing so with an astoundingly convoluted system that involves three different currencies.

"The hearts are Periscope's signature," said Sara Haider, Periscope's director of engineering. "It allows viewers to engage with broadcasters in lightweight, ephemeral, lovely kind of fluttering way, to show the broadcaster that they are liking what they're seeing."

"And to the broadcaster, it's like hearing the roar of the crowd," she added. And with Super Hearts, that roar can finally be turned into dollars.

In this article: applenews, broadcasters, gear, internet, mobile, periscope, superhearts, twitter
All products recommended by Engadget are selected by our editorial team, independent of our parent company. Some of our stories include affiliate links. If you buy something through one of these links, we may earn an affiliate commission.