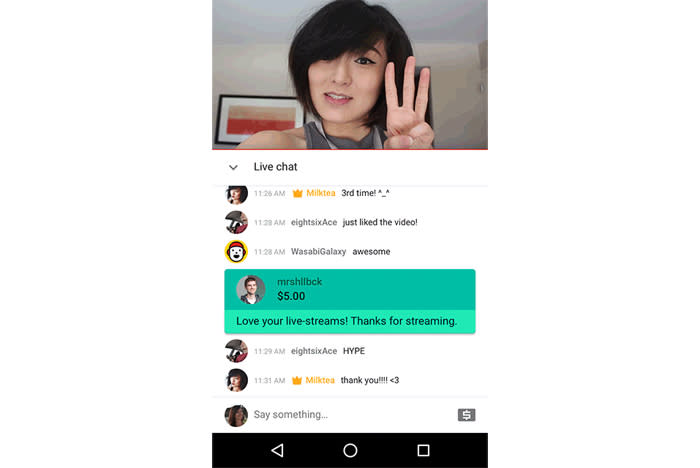 Making yourself heard in a livestream chatroom can be nearly impossible -- on a busy stream, dozens of messages can scroll by every second. How do you get your favorite YouTuber to notice you? Starting today on select channels, you can pay for it. Super Chat is a new YouTube live feature that lets users pay to pin messages to the top of a chatbox for up to five hours.

Adding a Super Chat is easy: users just have to click the dollar sign in the web chat interface or Android app (iOS support is coming later) and pay to have their comment featured. The more you pay, the longer your chat message sticks. At least part of that payment is going directly to the creators, too -- giving fans a new way to support their favorite channels. Think of it as YouTube's version of Twitch Cheering, but without animated emoji.

Right now, the feature is only available on select channels, but Google plans to roll it out to more users by the end of the month.

In this article: av, chat, chatroom, donate, entertainment, google, livestreaming, payments, sponsership, streaming, youtube
All products recommended by Engadget are selected by our editorial team, independent of our parent company. Some of our stories include affiliate links. If you buy something through one of these links, we may earn an affiliate commission.