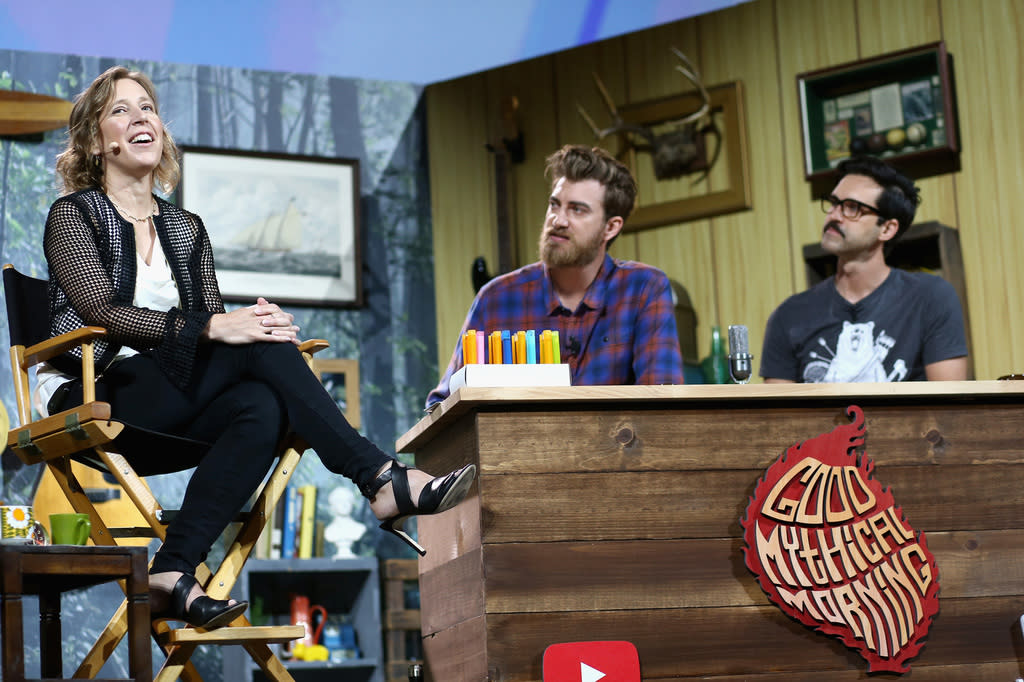 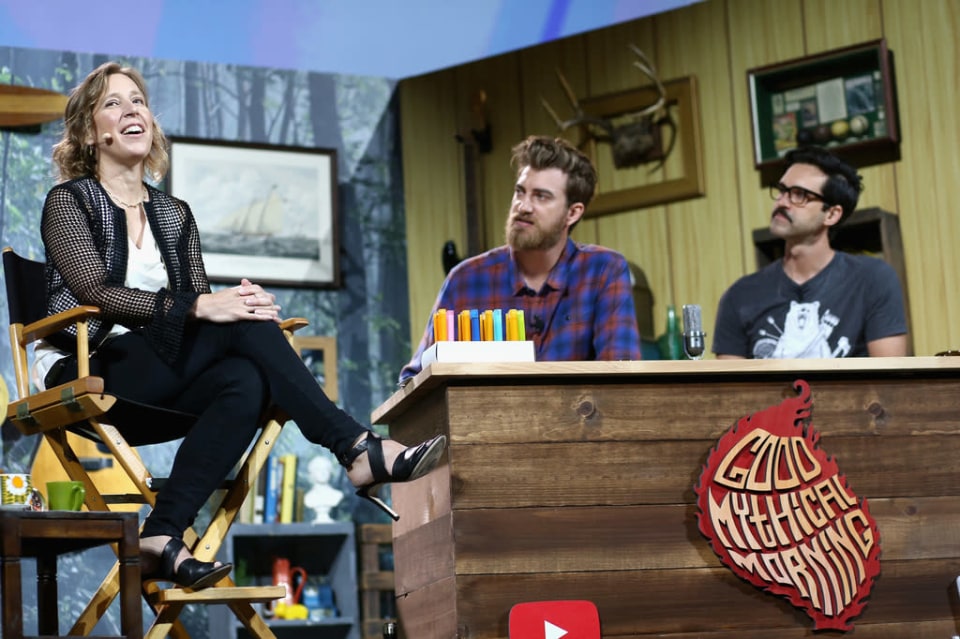 Other than its innovated VR180 format and YouTube TV expansion, Google's video streaming site found time to mention its subscription package during Vidcon 2017. For 2017 the YouTube Red Originals lineup has a mix of new series on the way including an eSports comedy from Dan Harmon (Community) called Good Game starring Game Grumps personalities Dan Avidan and Arin "Egoraptor" Hanson, and its first reality series, Lace Up: The Ultimate Sneaker Challenge.

As far as renewals, we knew of a cancellation for PewDiePie's show, but one of Red's first shows, Foursome, will return for a third go-round, alongside four other returning series and one movie sequel. YouTube also finally dropped a number showing some of the activity on its service, saying its originals have notched "nearly" a quarter billion views. After the break, check out a quick teaser trailer for the new shows plus more details on all of them.

RYAN HANSEN SOLVES CRIMES ON TELEVISION*: ​This action-comedy is set in a world where the LAPD thinks it's a good idea to form a task force partnering actors with homicide detectives so they can use their "actor skills" to help solve murders. Starring Ryan Hansen ("Veronica Mars," "Party Down") who plays himself and guest star Samira Wiley ("The Handmaid's Tale," "Orange Is The New Black") as his no-nonsense partner Detective Mathers, the series features a who's who of broadcast and cable television stars playing bizarro versions of themselves including, but not limited to, Joel McHale Jon Cryer and Kristen Bell. Rawson Marshall Thurber ("Central Intelligence," "We're the Millers," and "Dodgeball: A True Underdog Story") serves as the director, writer, creator and executive producer of this super meta half hour comedy procedural which is as much about Hollywood as it is an action-comedy cop show. The series is executive produced by Thurber, Scott Stuber, Beau Bauman, Krysia Plonka and Tracey Baird.

DO YOU WANT TO SEE A DEAD BODY?: ​This comedy series follows comedian Rob Huebel ("Childrens Hospital," "Transparent") and his celebrity friends who begrudgingly join him on adventures that see them frolicking at the beach, getting tacos, ...oh...and seeing a dead body. Celebrity guest stars include Adam Scott, Judy Greer, Terry Crews, Craig Robinson, and John Cho along with many more. Huebel, Owen Burke, Nick Jasenovec, and Jonathan Stern serve as executive producers. ​The series is being produced by Abominable Pictures and Funny or Die. GOOD GAME: ​The worlds of eSports and comedy collide in GOOD GAME, a new scripted series from Starburns Industries, Dan Harmon's Emmy Award-winning production company. The series follows a newly formed team of eSports players trying to make it to the top in the cutthroat world of competitive gaming, and stars the Game Grumps' Dan Avidan and Arin Hanson along with Michele Morrow. GOOD GAME debuts on YouTube Red on August 30, 2017.

LACE UP: THE ULTIMATE SNEAKER CHALLENGE:​ LACE UP: THE ULTIMATE SNEAKER CHALLENGE, hosted by YouTube star Swoozie, is an innovative new series from legendary television producer Ken Mok and famed sneaker designer D'Wayne Edwards. In the first-ever unscripted competition series, aspiring footwear creators from around the world battle it out to determine who can design, develop and produce the next great sneaker. LIFELINE:​ Set in the not-too-distant future, a little known life insurance company sends its agents forward 33 days in time to prevent the accidental deaths of its clients. The company's best agent, Conner Hooks (Zach Gilford), has never missed a save – until he takes on the most personal case of his life. When sixteen-year-old Norah (Sydney Park) is orphaned on his watch, Conner pledges to protect her, even if that means putting his career at Lifeline – or his own life – in jeopardy. The series is being produced by Seven Bucks Productions, co-founded by Dwayne Johnson and Dany Garcia, and Studio71, the digital entertainment company and multichannel network of ProSiebenSat.1.

FURZE WORLD WONDERS: ​In FURZE WORLD WONDERS, extreme inventor and YouTube superstar Colin Furze takes his signature mad genius builds to brand new places. Known for his incredible backyard inventions, Furze puts his unique talents to use for other people, in this new YouTube Red show. Whether helping a brother and sister achieve A GUINNESS WORLD RECORDS™ title for the largest water rocket or creating an epic battle barge for a family looking to even the score in an annual water fight, every episode is filled with epic and outrageous creations from YouTube's most extreme inventor. Records will be set and minds will be blown! Produced by 9 Story Media Group, FURZE WORLD WONDERS is family viewing at its best.

ESCAPE THE NIGHT: SEASON 2: ​The popular murder mystery series starring Joey Graceffa, transports YouTube creators into a whodunit murder mystery where they'll form alliances, solve clues, and brace themselves for terrifying new surprises in every episode. This season, nine new dinner guests find themselves transported into a Victorian-era masquerade ball where they must solve a mystery to survive. The 12-episode second season is produced by Brian Graden Media and Graceffa and debuted on YouTube Red today. FOURSOME: SEASON 3​: After season two premiered to over 12 million views, FOURSOME has been renewed for a third season. In the new season, the gang scores tickets to a winter break vacation, but the Foursome's problems aren't so easily left behind. Starring Jenn McAllister, season three will premiere later this year on YouTube Red.

RHETT & LINK'S BUDDY SYSTEM: SEASON 2:​ Rhett & Link return for the second season of their hit comedy series RHETT & LINK'S BUDDY SYSTEM. The series features Rhett McLaughlin and Link Neal playing fictionalized versions of themselves. In the first season, the duo embarked on a Mythical adventure and confronted a cast of bizarre characters to save their wildly popular YouTube channel, Good Mythical Morning, from the clutches of their evil co-ex-girlfriend. The second season will see the two traveling to even greater comedic heights and encountering more outrageous characters along the way. The second season is produced by Mythical Entertainment and will premiere on YouTube Red later this year.

MIND FIELD: SEASON 2: ​Michael Stevens takes us on a journey deep into the mysterious depths of the human psyche as he investigates the strange and surprising terrain of the MIND FIELD. This season, Michael dives deep into the amazingly intertwined worlds of psychology and neuroscience as no one has ever before. Working with the world's top scientists and research labs, Michael will conduct groundbreaking demonstrations that are even bigger, deeper, and more astonishing than before and offers us a revealing look inside our own minds that we will never forget. The series is Executive Produced by Michael Stevens and by Eli Holzman and Aaron Saidman for The Intellectual Property Corporation (IPC). David Wechter serves as showrunner and Executive Producer. FIGHT OF THE LIVING DEAD: SEASON 2:​ Alpine Labs' and Revolver Picture Company's FIGHT OF THE LIVING DEAD returns for another intense season of zombie mayhem in FIGHT OF THE LIVING DEAD: PARADISE CALLS. When a group of YouTube's most notable stars find themselves trapped in a fresh scenario battling all-new flesh eating humanoids, all bets are off as they must decide between forming an alliance with a rebel organization or following the potentially nefarious directives of underground government organization CONOP. The rules of the game remain the same...

DON'T. GET. BIT. LAZER TEAM 2​: The Lazer Team returns in this sci-fi action comedy and second feature film from Rooster Teeth, co-directed by Daniel Fabelo and Matt Hullum. After Woody (Gavin Free) goes missing while working on secret, alien research, scientist Maggie Wittington (Nichole Bloom) must recruit the former members of Lazer Team (Burnie Burns, Colton Dunn, Michael Jones) to join her in rescuing their lost friend. It's up to Maggie to bring the Lazer Team back together and rescue Woody. YouTube Red is a paid membership that gives you access to YouTube Red Original Movies and Series. In addition, you get a premium music service and an uninterrupted experience across YouTube, YouTube Gaming and YouTube Kids. YouTube Red is currently available in the United States, Australia, New Zealand, Mexico and Korea.

In this article: applenews, entertainment, google, originals, services, SusanWojcicki, video, YouTube, YouTubeRed
All products recommended by Engadget are selected by our editorial team, independent of our parent company. Some of our stories include affiliate links. If you buy something through one of these links, we may earn an affiliate commission.