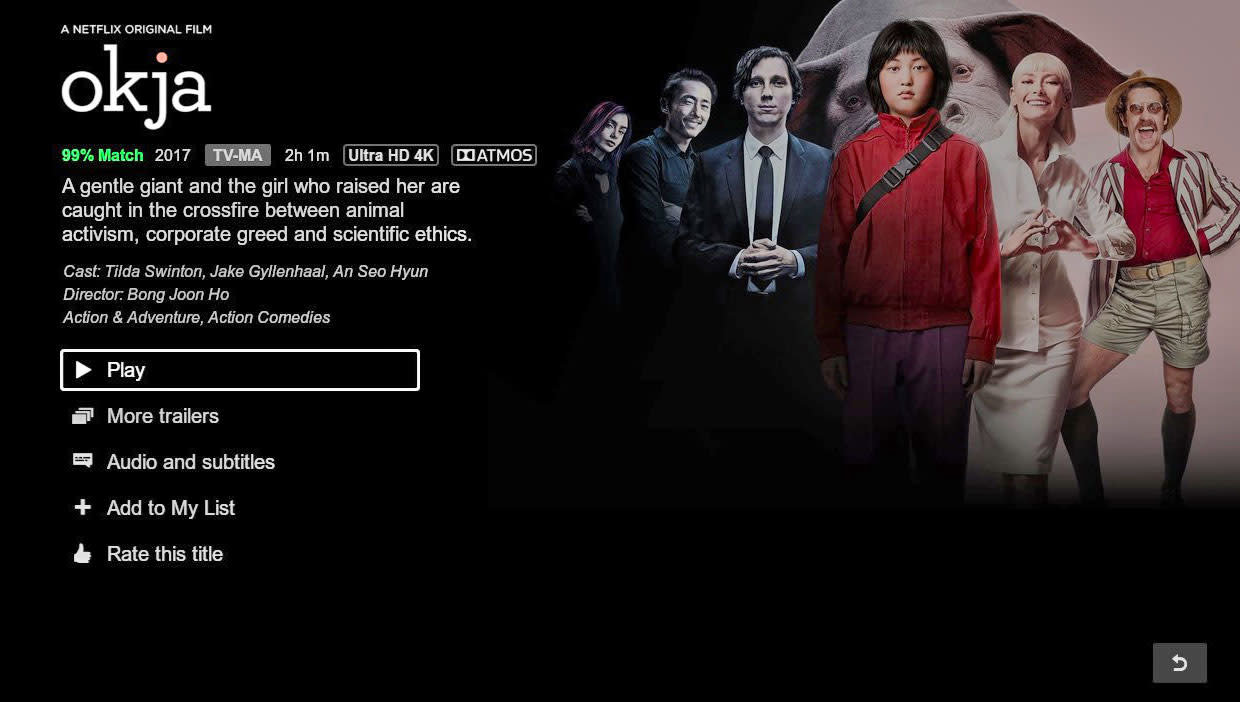 According to Dolby's website, Vudu is the only streaming service with titles that support Atmos 3D sound technology. Now, Netflix has joined the Atmos movement with the launch of Bong Joon Ho's (Snowpiercer) Cannes Film Festival flick about a cute "superpig" called Okja. Atmos gives filmmakers the power to designate where sounds are coming from in three-dimensional space to make movies as realistic and immersive as possible. It can, for instance, make a plane in the movie sound like it's really passing overhead or an incoming train sound like it's zooming in from behind.

While you can only enjoy the feature with Okja right now, Netflix already has a lineup of upcoming releases with Atmos support, starting with anime movie BLAME! to be available on July 28th. Its high-budget live action Death Note (August 25th) remake will also support the feature, as well as Will Smith's $90 million fantasy action film Bright, which will launch sometime in December. The last movie in the list is action thriller Wheelman, though the service will likely add more for next year.

The bad news? Netflix has pretty stringent requirements for Dolby Atmos streaming. You can only experience what it can offer if you stream Okja on a Microsoft Xbox One or Xbox One S. Further, the console must be connected to an Atmos-enabled home theater system, TV or soundbar. Headphones will also work, so long as you download the Dolby Access app from the Xbox Store. If you have an LG OLED TV, though, you don't need to spring for an Xbox One if you don't have it. Netflix says support for LG's OLEDs is coming "soon," and since they come with built-in Atmos capabilities, there's no need to hook them up to a separate sound system.

Update: This post has been updated to clarify that Amazon Video supports Dolby Vision, not Dolby Atmos.

In this article: atmos, dolbyatmos, entertainment, internet, lg, lgoled, netflix, okja, superuhd, tv, video, xboxone, xboxones
All products recommended by Engadget are selected by our editorial team, independent of our parent company. Some of our stories include affiliate links. If you buy something through one of these links, we may earn an affiliate commission.