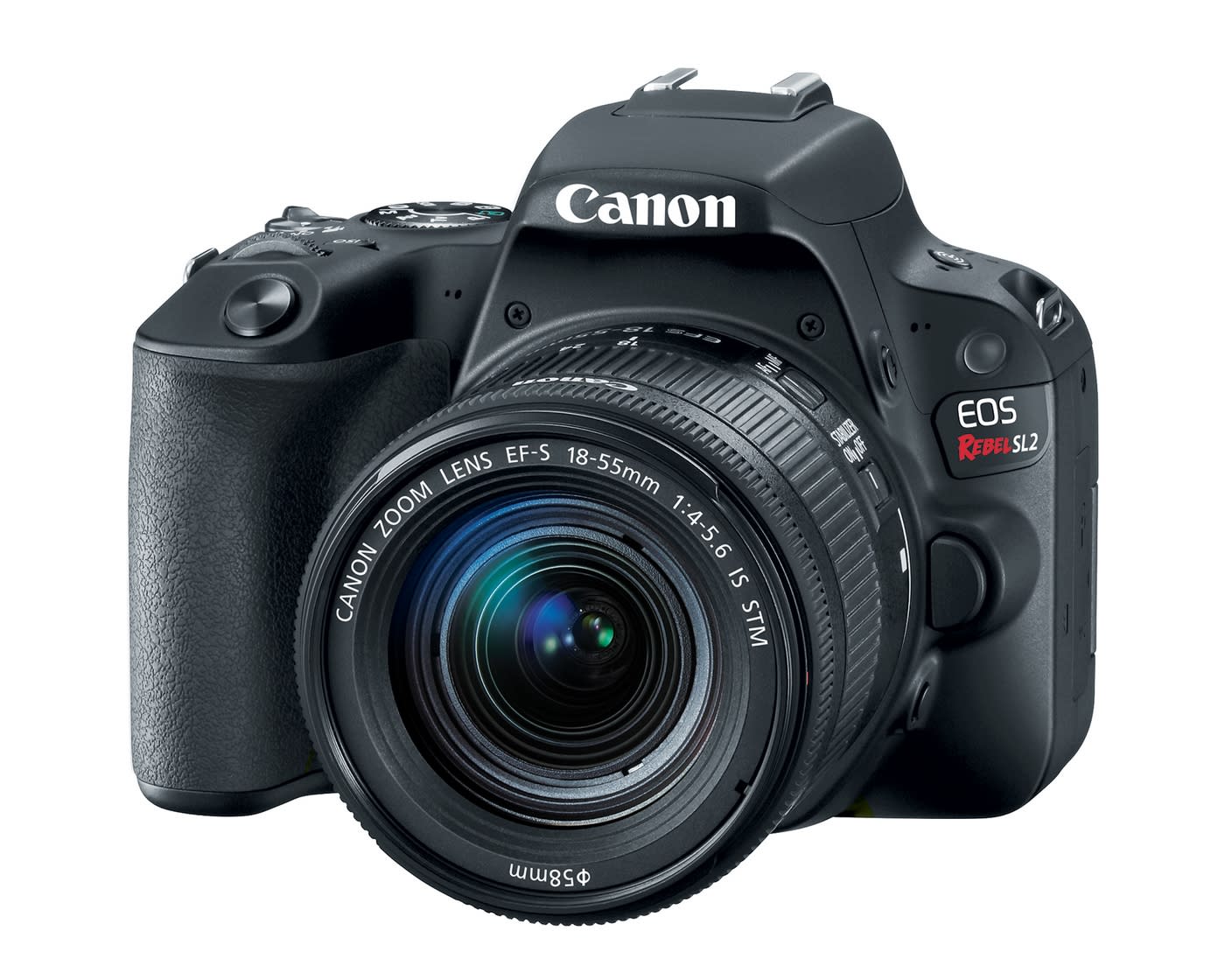 If you prefer a DSLR's true optical finder to the EVF of a mirrorless, but don't want to lug a heavy camera, there aren't many options. Canon does have one worthy of consideration, however: the EOS Rebel SL2. It replaces the four-year-old Rebel SL1 and brings it to a much more modern standard, thanks mostly to a new 24.2-megapixel APS-C sensor. At the same time, it only gains a bit of weight, going from 407 to 453 grams, which is exactly one pound.

With the Rebel SL2, you're getting a walking-around DSLR with Canon's impressive gamut of lenses and decent, but not amazing, specs. That includes a sensor with around 30 percent percent more resolution (the same as the one on the EOS 77D and Rebel T7i), and a new liveview dual-pixel autofocus system. However, Canon says that the 9 point AF system is the same as the one on the previous model, which is pretty disappointing considering the competition and how old it is.

That yields a continuous shooting speed of 5 fps, up from 4 fps on the last model, with a decent 3.5 fps in liveview mode thanks to the new dual-pixel system. Native ISO goes up to 25,600 compared to 12,800 before, expandable to 51,200. Canon adds that it has updated the Rebel SL2 to its new, simpler menu user interface, first introduced on the EOS Rebel T7i. Other specs include a 1.04 million dot, 3-inch touchscreen that sounds a lot like the one on the new Canon 6D Mark II. Connectivity-wise, you get Bluetooth 4.0, WiFi and NFC, making it easier to sync the camera with your smartphone. One other bonus: the battery is slightly larger than the one in the last model, giving you a bit more shooting time.

For video, the Rebel SL2 can shoot 1080p at up to 60 fps, the same as with Canon's new full-frame 6D Mark II model. Continuous video AF should be better with the dual-pixel AF. The lack of 4K is not as disappointing for the Rebel model as it is for the 6D Mark II, but for $100 more, you can get Panasonic's Lumix G7, an interchangeable lens MFT camera with Ultra HD video.

Update: The article previously said the Rebel SL2 didn't have a touchscreen, which is not the case. The article has been corrected to read that the SL2 does have one. Thanks to Twitter user @jacobsburley for pointing that out.

In this article: APS-C, cameras, canon, DSLR, EOS, EOSRebelSL2, gear, Rebel, Sensor, SL2
All products recommended by Engadget are selected by our editorial team, independent of our parent company. Some of our stories include affiliate links. If you buy something through one of these links, we may earn an affiliate commission.