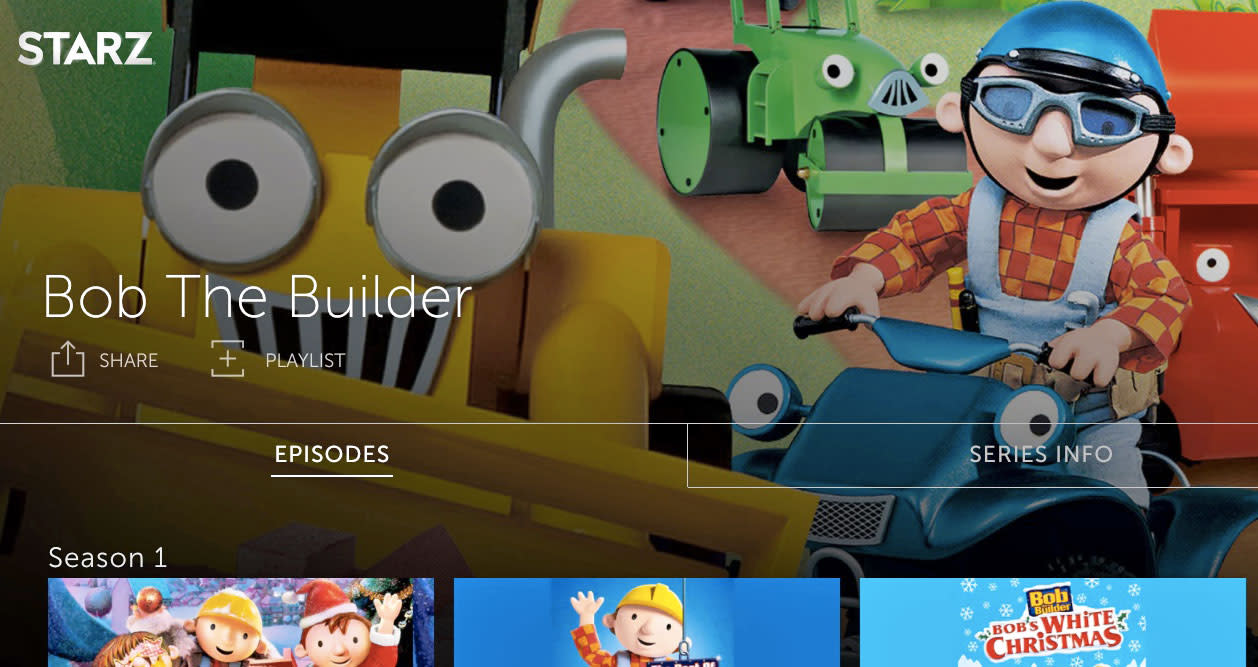 Starz is turning its attention to "underserved audiences" in the world of streaming video, adding a raft of children's shows and Spanish-language programs to its $9-a-month library and on-demand platforms. Bob the Builder and Thomas and Friends are among the fresh kid-focused titles, while adults can enjoy nearly 300 new Spanish-language movies and TV show episodes, including Colombian telenovelas La Promesa and El Cartel de los Sapos.

When Starz launched its app in April 2016, it brought 2,400 movies and television episodes along for the ride. Fourteen months later, that figure across all of Starz's on-demand and over-the-top platforms has ballooned to 5,500, and the network plans to offer a total of 7,700 episodes and movies by the end of the year. A lot the focus has been on children's programming: There are roughly 1,250 kids' episodes on Starz streaming services, and the company hopes to push that figure past 2,000 by December.

Children's programming has a prominent place in the streaming world -- Netflix has said about half of its members watch kids' content, and it just launched a slate of interactive, choose-your-own-adventure shows for wee ones. Even HBO, an adult-focused network, found it worthwhile to save Sesame Street from extinction in 2016.

By the end of 2017, Starz plans to add more than 60 new series to its kids' lineup, including Alf, Speed Racer: The Next Generation, Kid Diners, Zatch Bell, The Wubbulous World of Dr. Seuss, The Cat in the Hat TV specials, Jim Henson's The Storyteller, Naruto and Garfield and Friends. As for Spanish-language programming, look out for critically acclaimed films I'm So Excited, Chico and Rita and No, plus children's shows Exploradores de la Historia and Horacio y los Plasticines.

The push for more content overall makes sense as Starz attempts to infiltrate a market dominated by Netflix, Hulu and Amazon Prime Video. These providers offer award-winning original programming and they regularly swap out shows, making their total title counts difficult to pin down. But, in March 2016, research firm Barclays estimated Netflix offered 7,008 films and TV series, while Hulu had 10,244 and Amazon Prime had 20,386. Note this is counting the number of series, not episodes, on each platform -- Starz presents figures based on the number of episodes it offers, rather than franchises as a whole.

But, clearly, quantity isn't everything. High-quality original and exclusive programming has become more important to streaming giants as the market has matured, and Starz is in on this movement. It exclusively offers American Gods and Outlander -- shows that, for many fans, are worth $9 per month alone.

In this article: app, av, business, entertainment, home, kids, movies, ott, personal computing, personalcomputing, spanish, starz, streaming, television
All products recommended by Engadget are selected by our editorial team, independent of our parent company. Some of our stories include affiliate links. If you buy something through one of these links, we may earn an affiliate commission.