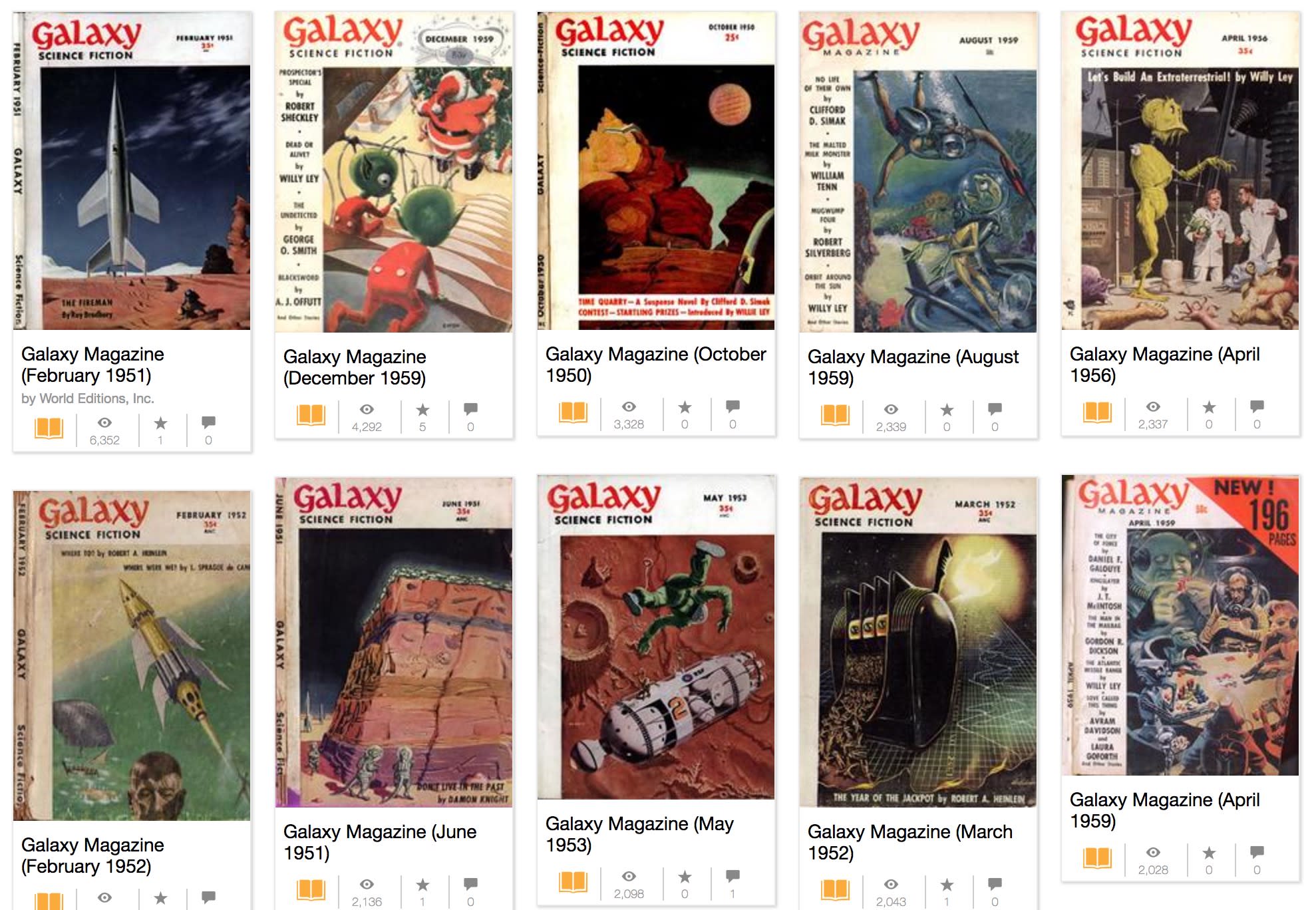 The next time you watch a big blockbuster sci-fi film like Alien: Covenant, you can thank the original pulp magazines. The written form of the popular genre got its start in comic book-sized magazines like Amazing Stories, Astounding Science Fiction, Galaxy Science Fiction, The Magazine of Fantasy & Science Fiction and Isaac Asimov's Science Fiction Magazine. These publications, under the direction of influential editors like John W. Campbell, Jr., helped improve the genre from basic adventure stories to more thoughtful, well-written speculative fiction by authors like Robert Heinlein, Isaac Asimov, and Arthur C. Clarke. It's not an overstatement to say that these magazines created the current science fiction craze. Now, Galaxy Science Fiction, a magazine that published Ray Bradbury's "Fahrenheit 451" and Alfred Bester's "The Demolished Man," is available for free online.

From 1950 to 1980, the digest-sized Galaxy Science Fiction magazine became well-known for its focus on social issues rather than technology, which became its own sub-genre (New Wave) within the larger speculative fiction scene. Author Frederik Pohl helped the original editor, H.L. Gold, craft the production from the late 1950's, eventually taking over officially in 1961. There were a string of editors after the magazine was sold in 1969, and the quality never quite recovered barring a couple of solid stints by talented editors like James Baen, who went on to found sf imprint, Baen Books. The final issue came out in 1980; a semi-professional publication came out in 1994 under the same name but only lasted eight bimonthly issues.

You can read 355 separate issues spanning the years 1950 - 1976 of Galaxy Science Fiction over at Archive.org right now. Each one is available for download in a variety of formats, too, including accessible ones like Abby and Daisy, along with the more typical Epub, Kindle, and PDF versions. Having such a wealth of seminal, modern science fiction at your fingertips is yet another example of how great the internet can be.

In this article: archive, digest, free, Galaxy, GalaxyMagazine, gear, internet, online, publishing, pulp, sciencefiction, scifi, sf
All products recommended by Engadget are selected by our editorial team, independent of our parent company. Some of our stories include affiliate links. If you buy something through one of these links, we may earn an affiliate commission.