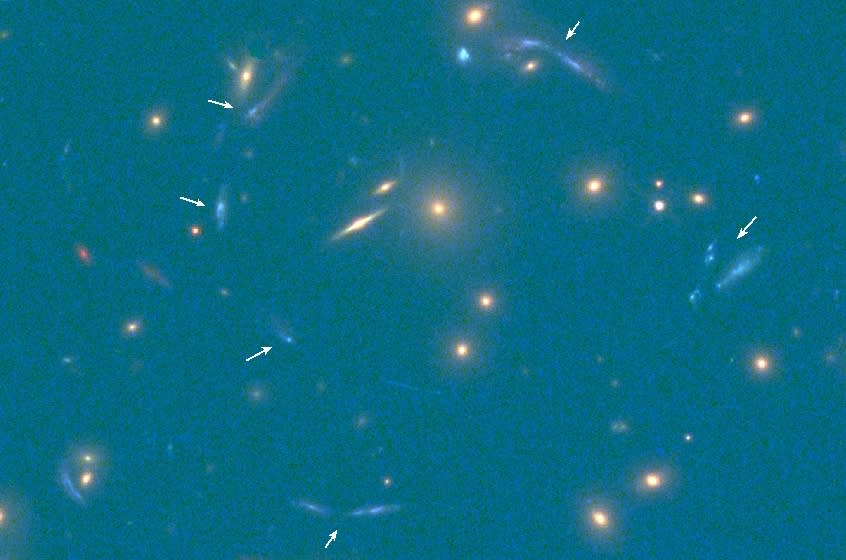 Scientists at the Instituto de Astrofisica de Canarias, a research institute in the Canary Islands, just discovered one of the brightest galaxies we've ever come across. It's around a thousand times brighter than our galaxy, has a very high rate of star formation and is 10 thousand million light years away.

The researchers found the galaxy using the gravitational lensing effect wherein really massive objects in space, like galaxies or galaxy clusters, warp and enhance the light of smaller objects nearby. This phenomenon has helped researchers track down exoplanets, black holes and unexpected galaxy types. This discovery, which was recently published in the Astrophysical Journal Letters, was made possible by a galaxy cluster that lies in between us and the newly observed bright galaxy. "Thanks to the gravitational lens produced by a cluster of galaxies between ourselves and the source, which acts as if it was a telescope, the galaxy appears 11 times bigger and brighter than it really is, and appears as several images on an arc centred on the densest part of the cluster, which is known as an "Einstein Ring," Anastasio Díaz-Sánchez, an author of the article, said in a statement.

The light amplification and multiple images of the galaxy produced by the gravitational lensing effect helped the scientists see the galaxy and will help them analyze more details about its composition in the future. The researchers have dubbed this galaxy the Cosmic Eyebrow because of the similarities to another galaxy called the Cosmic Eyelash. That galaxy got its name because it was found near a young galaxy called the Cosmic Eye, which looks like its namesake due to its image being warped by gravitational lensing.

The Cosmic Eyebrow, which because of its distance we're seeing the earlier stages of, will help researchers understand the formation of large distant galaxies and how they evolve into elliptical galaxies that exist today. Susana Iglesias-Groth, another author of the study, said, "This type of objects harbour the most powerful star forming regions known in the universe. The next step will be to study their molecular content."

In this article: astronomy, einsteinring, gadgetry, gadgets, galaxy, galaxycluster, gear, gravitationallensing, MilkyWay, research, space
All products recommended by Engadget are selected by our editorial team, independent of our parent company. Some of our stories include affiliate links. If you buy something through one of these links, we may earn an affiliate commission.