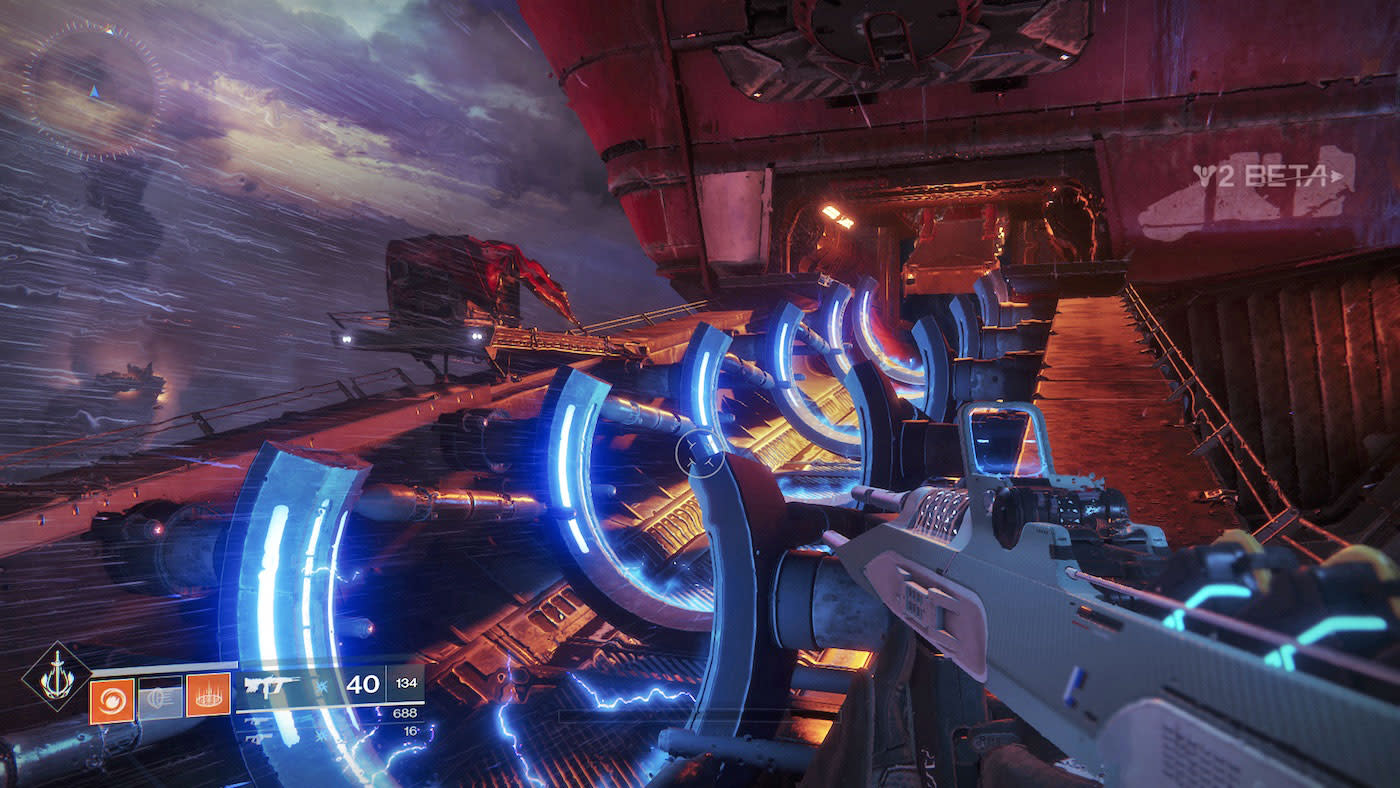 One weekend with the 'Destiny 2' beta

It's easy to think of the original Destiny as a large-scale, highly polished test run for Bungie's vision of the future of video games. When Destiny came out in September 2014, it was unclear whether an MMO-style first-person shooter could even work on consoles, and it wasn't guaranteed players would be able to reliably connect to the servers over the game's lifetime. We're talking about an online-focused game that landed on the Xbox 360 and PlayStation 3 alongside current-generation consoles, back before Rocket League, Smite or Overwatch invaded the living room. Back when the industry knew something like Destiny was possible but not whether it would be popular or profitable.

Bungie has tweaked Destiny over the game's lifetime, incorporating fan feedback into add-ons like The Taken King and Rise of Iron, and players have stuck around for the ride. Last week, fans got their hands on Destiny 2 for the first time in an open beta across Xbox One and PlayStation 4 -- and though the test was supposed to end over the weekend, it was extended through July 25th. Now that Bungie has proved Destiny's success, the sequel is a chance to truly push the medium forward and leverage a new ecosystem of connected consoles.

I didn't play the first Destiny for long. I gave it a few months; I put in my time, ran some strikes and dominated a few raids, and then I just kind of stopped playing. I was aware of the hype around The Taken King, and even though players across the board promised it changed the game in wonderful ways, the add-on wasn't enough to pull me back in.

Playing the Destiny 2 beta feels a lot like those first few weeks with Destiny. I'm intrigued and excited -- shooting down enemies and other players feels spectacular, as does jumping and using the special abilities of my Hunter and Warlock characters. Plus, I really, really want to try out the new Titan.

One fear the beta can't assuage: Will I give up on Destiny 2 after a few months, too? Answer me, Tim.

I mean, it's hard knowing how the game is going to play out beyond that taste of the campaign the beta gave us, right? For the most part, I played through the first game's story entirely solo. I co-opped a bunch of strikes with my best friend that weren't so easy to manage by myself, but the narrative missions were pretty much solitary affairs. I know that's not what Bungie had in mind, but I was curious if the game could hold up as a single-player experience. Spoiler: It did not. That got a lot better with The Taken King, but once I finished the expansion's narrative missions I didn't feel like grinding for better gear and set the game down for good.

I will say, though, the lone campaign mission in the beta was awesome. Well, right up to the point where it wasn't. For me, that happened near the end, after the loading screen that bisects the mission. I have a massive soft spot for the first Halo campaign, and how this plays out, with scripted events everywhere and AI teammates jumping in and out of battle, felt a lot like that.

And then I met the big boss; he took away all my gear and kicked me off a ledge. Because, of course, Destiny 2 is going to make sure you start entirely from scratch, rather than have a killer set of exotic weapons and armor at the outset.

I really enjoyed the campaign -- including the narrative tension of getting kicked off that ledge -- but that's not where this beta experience ended. There was also the cooperative strike, The Inverted Spire, and a competitive multiplayer mode, The Crucible.

I played through the strike with my partner watching next to me on the couch -- he'd played it once already and warned me the final boss, a giant bipedal robot, was difficult. I dived in, took some shots, died once, and a teammate revived me. Just as I rematerialized in a hail of gunfire, my Super ability lit up. I rushed the robot and smacked it around with my lightning-powered staff while the rest of my squad piled on. We took it down with relative ease after that. And then we had a dance party.

That's what makes Destiny so refreshing -- these moments of almost-accidental teamwork when the digital stars align and transform a haphazard group of video game fans into a real crew capable of getting shit done. That's one reason I've been so obsessed with Overwatch recently, too.

I love teamwork like that, and how Destiny 2 incorporates it into the campaign is really neat. The "swift strikes" are an evolution of the "public events" that'd occur during patrols, and kept the game from feeling like a grind (there's that word again). When others would spawn in to help me fight waves of tougher enemies, that is. Given that I was playing pretty late at night and this is just a beta, that only happened during my first few encounters.

When it worked, it was kind of a thrill. The music would swell, squads of the now-lithe Cabal enemies would drop in from the sky and for a few minutes, three perfect strangers were straight up wrecking shit. There was just enough of a challenge that it didn't feel like a shooting gallery, and coupled with tighter gunplay and faster movement, everything felt simultaneously fresh and familiar.

But after a certain point randoms stopped spawning into my game world and I was facing hordes of aliens by my lonesome, chipping away at their health bars, dying and respawning ad nauseam. It brought to mind my least favorite parts of the first game and sucked the fun out of it for me. Near the end with the giant turbine, I rushed past the overpowered flying mini-boss and jumped into destroying the turbine's motors just so I wouldn't have to grit my teeth anymore.

Did you have better luck in that department?

I'll be honest -- I'm still not sure how the player drop-in system works in Destiny 2. My campaign experience was similar to yours: A group of online allies joined my defense of the Tower, which was unexpected and completely welcome, but then I never saw another player again. My partner, meanwhile, didn't see anyone else during his entire run-through.

This experience messed with my head a bit. I didn't expect other players to show up in my campaign before reaching the Tower, and afterward, I was constantly looking around for those little floating name tags, especially during high-intensity fights. Bungie gave me a taste of teamwork, only to cruelly yank it away. I assume the full game will have more players, making these drop-in moments more frequent and fulfilling -- but we'll see.

There were always plenty of beta players ready to dive into a Crucible match, however. Crucible is the most esports-y aspect of Destiny 2, pitting two teams of four players against each other in online matches. The beta featured two modes, Control and Countdown.

I really enjoyed shooting enemies in Destiny 2, so I really enjoyed Crucible. The rounds were fairly rapid-fire, lasting about 10 minutes apiece -- just long enough to satiate my bloodlust without making each match feel like a serious commitment. There was a fairly noticeable skill gap among players in my Crucible games, but everyone in the beta was trapped at level 20, making it difficult to really comment on the mode's matchmaking prowess.

See, to me Crucible felt really heavy and slow in the first game, so I didn't even bother jumping into it during the beta. It also felt really unbalanced because your gear from the campaign carried over into multiplayer. Or maybe those are just the excuses I use so I don't feel bad about constantly getting owned in adversarial play. But I really like the social aspects of the campaign and how you can play it like Journey, with people coming and going as they please, and no one is penalized for it.

When I talked with Bungie before the first game came out, Community Manager Eric Osborne called this "mingleplayer." Meaning, light, casual interactions with other people without the pressure or hassle of sending them a friend request or even starting a voice chat session. I'm really looking forward to seeing how Bungie pushes that further in the sequel. With the changes to how raids are structured and the fact that Looking for Game stuff is baked right in, I might actually dive into one this time 'round. A big part of my experience with the first game was doing strikes with my best friend, who found himself surprisingly addicted. He even had three Warlocks at once so he could trade gear among them. But he felt Bungie invalidated all the grinding he did to fully upgrade his subclass and exotic gear.

Once Destiny's first expansion was released, you could just buy high-powered weapons and armor. He's justifiably wary of returning, so if I'm going to spend much time with Destiny 2 I'm going to lean pretty heavily on the social systems to keep me interested. I hope that the hiccups with those were just the nature of the beast: a test version of a multiplayer game we won't play again for a few months.

You're absolutely right; the social aspect of Destiny is one of its biggest draws. I played the first Destiny on Xbox One, even though most of my friends were on PlayStation 4 -- and that's probably one reason I stopped signing in after a few months. This time around, I'm on PS4 and I might have more luck jumping into games with friends or diving into Crucible matches, which could keep me coming back for more. After the beta, I'm not 100 percent convinced, but I am hopeful.