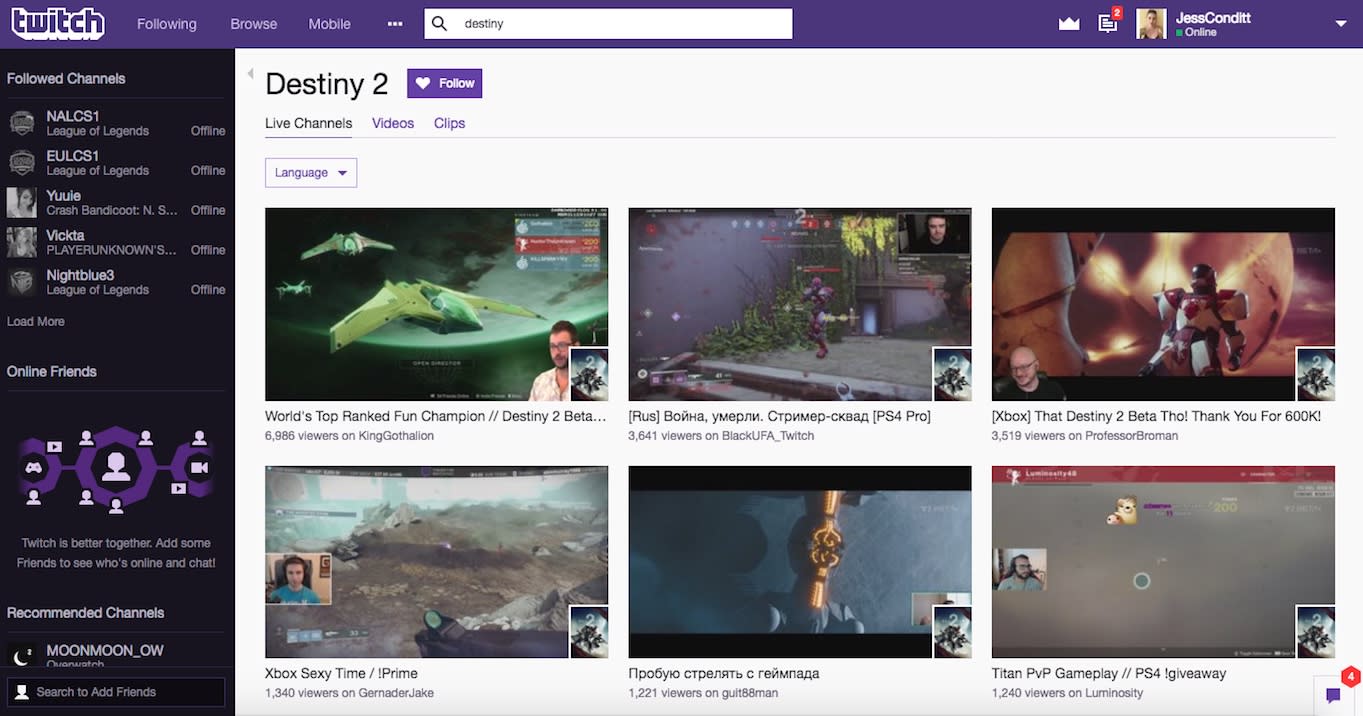 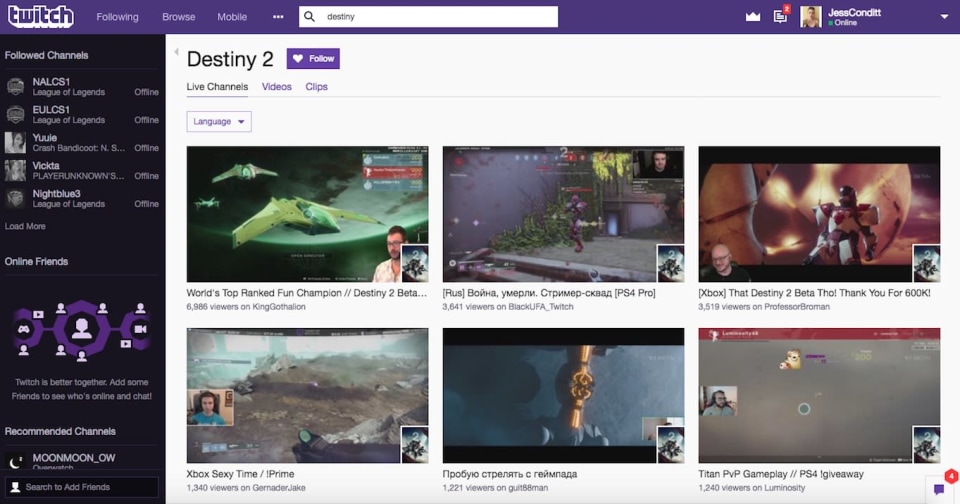 YouTube Gaming hit the net in August 2015, promising to compete with the live-streaming world's dominant force, Twitch. Two years later, both sites have evolved. Twitch offers a raft of nongaming streams -- including anime and '90s-TV marathons, cooking shows and creative corners -- plus it instituted an in-chat tipping system and enabled game sales directly on individual channels. Twitch has its own bustling economy.

Today, YouTube Gaming is lagging behind Twitch when it comes to actual viewer numbers, as demonstrated by the hottest new release: the open beta for Destiny 2. The beta went live July 18th, and it's been a hot topic across the video game community, with dedicated fans clamoring to consume every shiny new weapon, map and mode. Destiny 2 represents big-budget, AAA games with massive audiences -- the gaming industry's bread and butter. So, how is it faring on the two largest live-streaming sites? Viewers are crucial to the live-streaming giants, but they aren't everything. YouTube Live, the hub that houses YouTube Gaming, is actually growing faster than Twitch when it comes to the number of streamers on each site -- much faster.

Twitch has been around in its current form, more or less, since 2011, meaning slower growth is expected. However, being the OG video-game-streaming site has definite advantages, especially when that's paired with financial and structural support from Amazon. Twitch has taken control of its in-stream economy, responding to third-party tipping services like Revlo with built-in options for paying streamers and expanded support systems for the site's middle class of broadcasters. All of this means Twitch streamers are raking in far more money than folks on YouTube Gaming, at least when it comes to live content.

Twitch was responsible for 96 percent of all the tips generated on both sites in Q1 2017, with $22.55 million. YouTube Live, meanwhile, generated $940,000. Of course, Twitch had hundreds of thousands more streamers than YouTube Live -- and this figure was calculated before Twitch rolled out its Bits economy in June 2016. 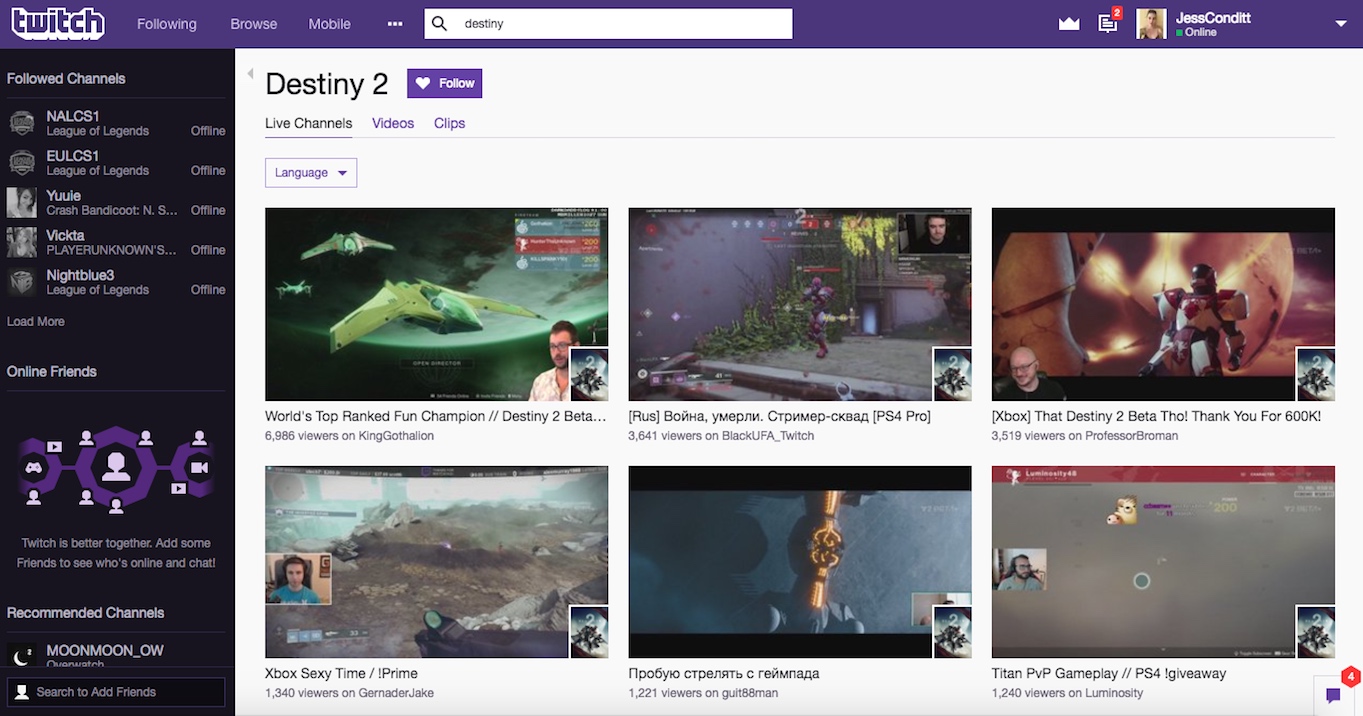 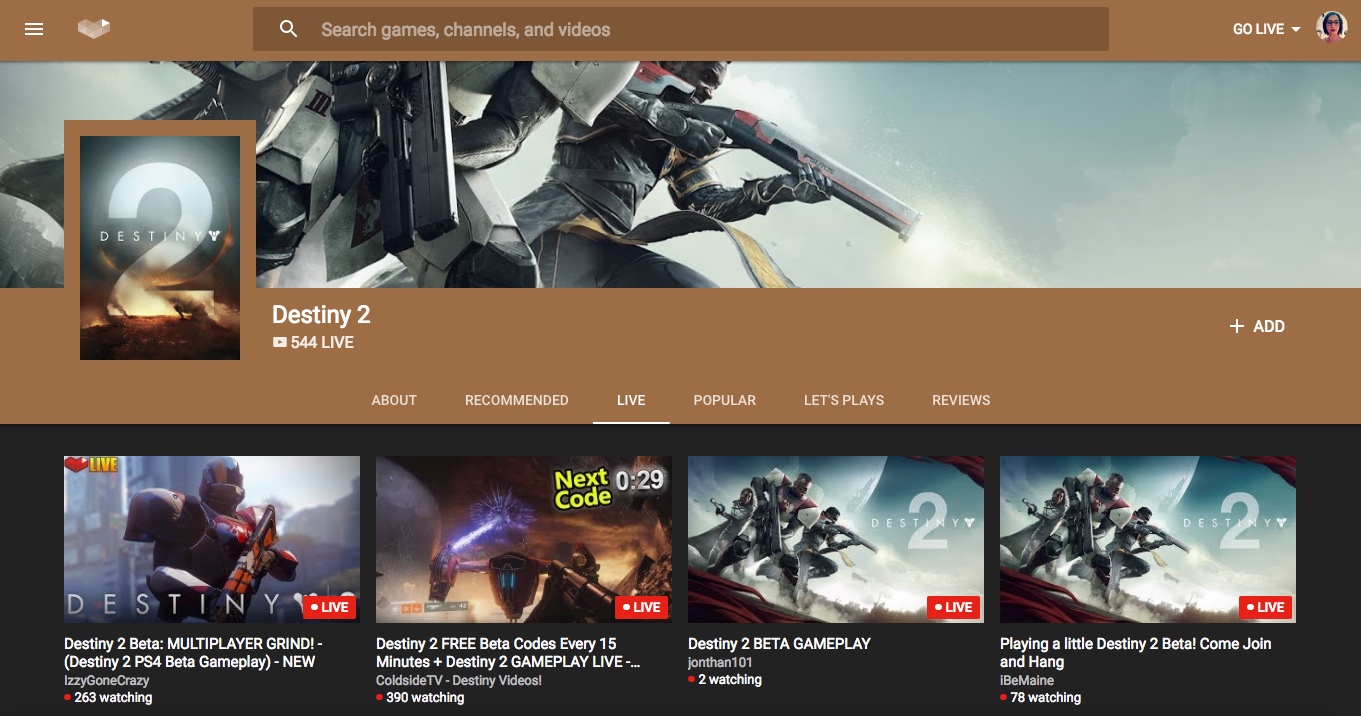 Both sites have a history of learning (and stealing ideas) from each other, though YouTube's main focus is still recorded video -- and it is the undisputed champion in this space -- while Twitch is miles ahead in the live-video market. Much like election polls, the Destiny 2 beta offers a snapshot of live-streaming life on Twitch and YouTube Gaming. It does not suggest either endeavor is failing or succeeding on its own, but in conjunction with historical data points, it offers a glimpse into these competing communities as they attempt to cash in on the most popular new title around.

In this article: activision, bungie, business, destiny2, destiny2beta, gaming, internet, Livestream, LiveStreaming, personal computing, personalcomputing, streaming, youtubegaming
All products recommended by Engadget are selected by our editorial team, independent of our parent company. Some of our stories include affiliate links. If you buy something through one of these links, we may earn an affiliate commission.