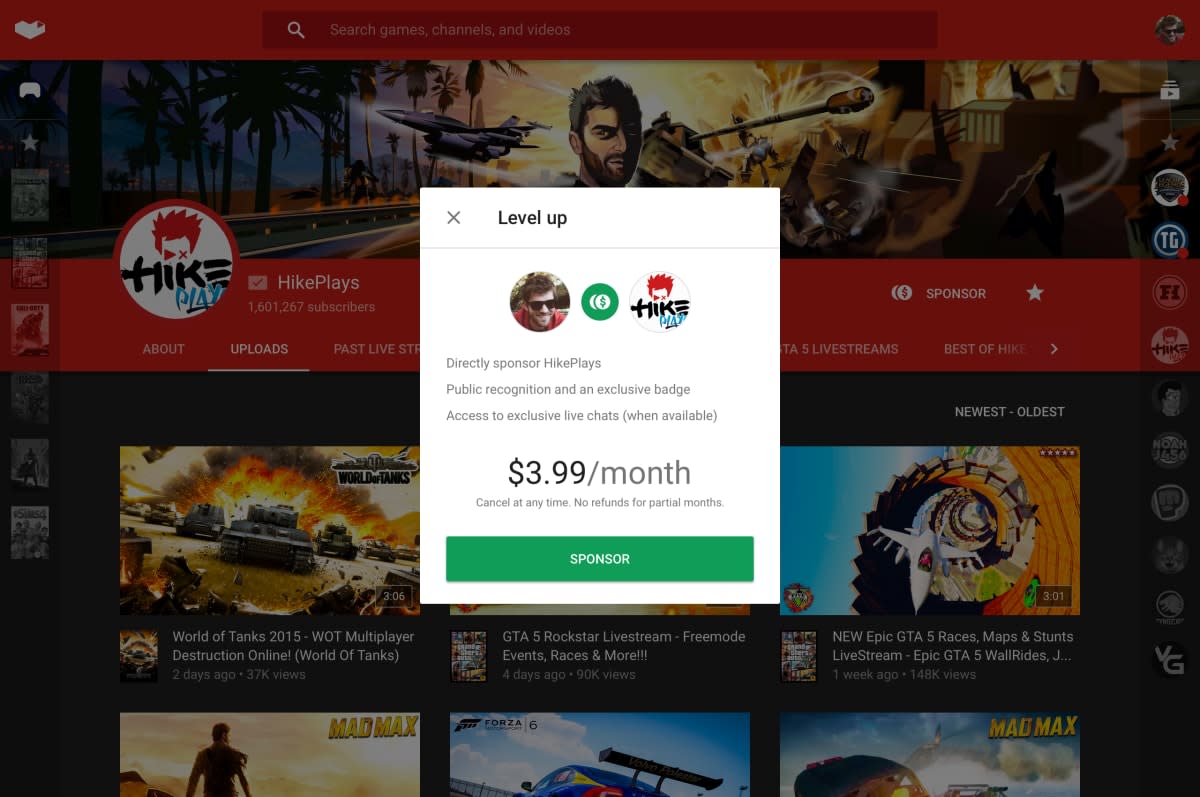 Remember when we said Twitch learned a lot from the recent launch of YouTube Gaming, Google's own video game-focused live-streaming site? Turns out, YouTube is picking up some tricks from Twitch, a veteran of the live gaming arena. YouTube Gaming is rolling out "sponsorships," a new option that allows viewers to give money to their favorite streamers monthly in exchange for a few perks, like a special badge for live chat and access to exclusive chat rooms. Sponsorships are $4 a month in the United States and the program is in beta now for a select group of streamers across 40 countries. It's a lot like Twitch's own subscription option, which is $5 per month and offers special badges, exclusive chat rooms and usually a live shout-out from the streamer.

YouTube Gaming isn't stopping at sponsorships, either: Today it launches live mobile streaming capabilities for Android devices, a feature it announced during the Tokyo Game Show in September. Mobile capture allows streamers to record and go live with their Android games, directly from their smartphones. It even supports front-facing Android cameras and microphones so streamers can show off their bright faces and bubbly personalities. YouTube Gaming promises there's no extra hardware or software required for mobile capture.

Now there's no reason for YouTube Gaming personalities to ever stop streaming -- more time live could mean more sponsors, which means more cash, and they can now even stream while on the bus, in the airport, at a club, in the bathroom, on a date or at their own weddings. Those are just (terrible) suggestions, of course.

In this article: android, google, hdpostcross, LiveStream, mobilecapture, sponsorship, streaming, twitch, youtubegaming
All products recommended by Engadget are selected by our editorial team, independent of our parent company. Some of our stories include affiliate links. If you buy something through one of these links, we may earn an affiliate commission.