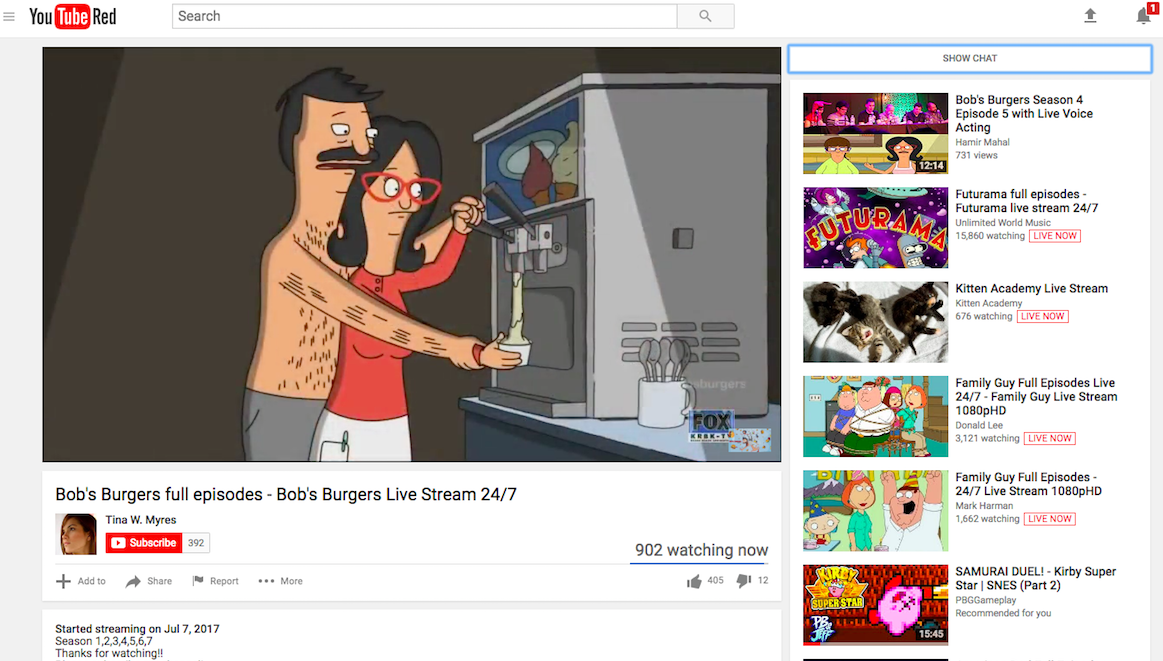 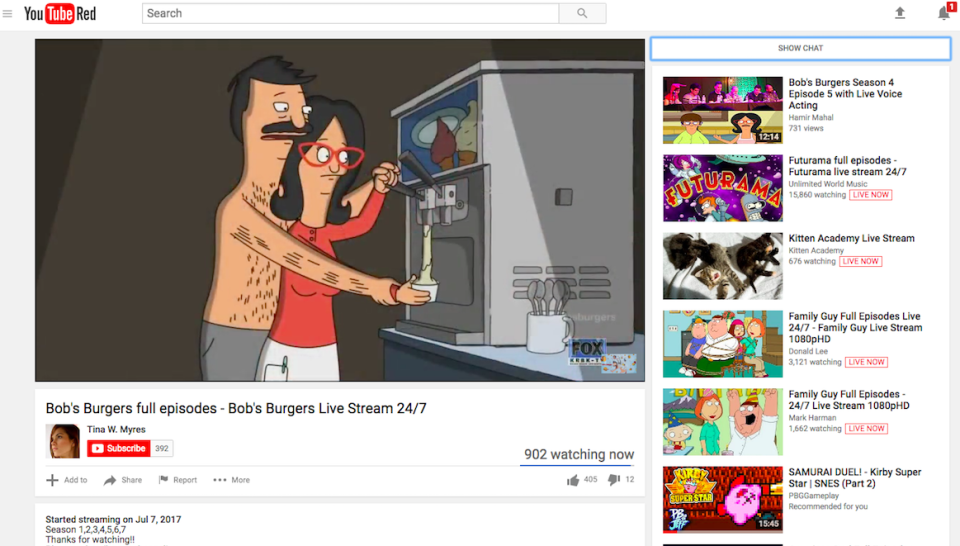 While livestreaming is often associated with Facebook and Twitter these days, YouTube has been offering the feature for more than five years now. Still, it's only recently that the video giant has taken the phenomenon seriously -- it's finally letting some users broadcast from their phones, and it's now easier to discover them via recommendations. Ironically, however, YouTube's own recommendation system helped me discover a huge flaw in livestreaming: flagrant copyright infringement. Indeed, it turns out that YouTube is infested with rogue streams of copyrighted content, and I wouldn't have discovered it if YouTube itself hadn't recommend them to me.

During the recent July 4th weekend, I was on YouTube looking up videos on how to cook the perfect burger. As I perused the search results, I came across something I hadn't seen before: what appeared to be a 24/7 livestream of Bob's Burgers, a popular animated show on Fox. I clicked on it and indeed, that was exactly what it was. The stream had only been running for four hours, but it already had thousands of viewers, and the live chatroom was full of people chatting about the episode. As the user hosting the stream did not appear to be in any way associated with the Fox Network, I had to assume it was not a legitimate feed.

But what was even more fascinating was the "Recommended for You" sidebar on the right of the video. It was a treasure trove of 24/7 livestreams of other popular animated shows like Futurama, The Simpsons, South Park and Family Guy. What's more, there were multiple livestreams of each show going on simultaneously, and several of them were hosted by different users.

Intrigued, I did a few more searches and found that there were literally hundreds of these streams. At the time of my search, there were about 11 separate livestreams of Bob's Burgers, around 70 livestreams of Futurama, 50 of South Park and 20 of The Simpsons.

A few of these streams had four to five thousand viewers, while most of them had only 20 or 30. A good chunk were only a few hours old, but I did come across one or two Futurama streams that began nearly five days ago. Upon further investigation, I found that sometimes one user would have five or six livestreams of the same show going simultaneously.

I felt like I had found a hidden gold mine of secret YouTube. This was all clearly very illegal and very against YouTube's own copyright rules. Further searches online reveal that the phenomenon isn't entirely new; it appears to have been around for at least a year (A quick Google search shows livestream feeds appearing as early as August 2016). Which makes the fact that YouTube hasn't resolved this issue yet all the more intriguing.

I left my computer alone for a few hours as I went about my weekend and returned to see if the illegal streams that I bookmarked were still around. Interestingly, one of them had been taken down, but the rest were still up. The next day, more of them were removed, and the following day, all of them were gone. It seems like the copyright owners had finally sniffed them out.

But all it took to get the streams back was to head to my YouTube homepage, which was suddenly rife with recommendations for illegal livestreams of animated shows. Indeed, all I needed to do was search for "Futurama" and I would get a slew of those 24/7 streams again. Heck, if I felt particularly lazy, I could even just go to YouTube's very own Live landing page to see several of them featured in the recommended section.

Over the past few weeks, I've noticed that as streams get taken down, more just pop back up. Sometimes it's the same user who does it, sometimes it's different. Some of these users have hundreds of subscribers, and only have a few other uploaded videos. YouTube is clearly trying to take down these rogue streams as fast as it can, but it's a constant cat-and-mouse game that YouTube doesn't seem to be winning.

Of course, YouTube has long had a problem with rogue actors uploading copyrighted videos to its platform; it's even been sued over it. Eventually, YouTube came up with a way of identifying copyrighted content with a system called Content ID. It's essentially a digital fingerprinting system that automatically matches video and audio files in a database to videos that are uploaded on YouTube. If a video is in violation, it gets a Content ID claim, and it might eventually be taken down if the content owner chooses to do that.

The problem, however, is that Content ID only comes into play with uploaded videos, not the ones that are streamed live. In YouTube's Support page, it states: "Content ID claims are only made after you complete your live broadcast, if you decide to archive the video." As you can imagine, most of these illegal livestreams are not archived, so Content ID claims can't be filed. In a statement provided to AdAge, which reported a similar issue in April, YouTube states that it "respects the rights of copyright holders" and that it has "invested heavily in copyright and content management tools to give rights holders control of their content on YouTube." It also said: "When copyright holders work with us to provide reference files for their content, we ensure all live broadcasts are scanned for third-party content, and we either pause or terminate streams when we find matches to third party content."

Engadget received the same statement from YouTube when we reported the issue. We were also told that when a copyright takedown notification has been received on a video or a livestream, that content is removed promptly and the accounts of repeat offenders are terminated.

YouTube isn't the only one trying to figure out how to manage the Wild, Wild West of live video. Facebook and Twitter have run up against this issue too, with people sneaking in livestreams of concerts or sporting events. Periscope, for example, came under fire from HBO when users used it to stream the fifth season premiere of Game of Thrones, as well as the Mayweather vs. Pacquaio boxing match. Of course, there are other issues with livestreams too. In the past year, people have used Facebook and Periscope to broadcast violent acts such as murders, suicides and rapes.

Both Facebook and Periscope have provided statements in the past that they respect the intellectual property rights and will take down videos if notified. Periscope told Engadget that all content must follow community guidelines, which include adherence of copyright and must not contain content that's violent or pornographic. But it still seems like viewers have to proactively flag these videos to get moderators to notice; there's nothing really preventing them to be streamed in the first place. Controlling live video, as it turns out, is pretty hard.

When asked about these live streams that appeared in my Recommendations feed, YouTube simply said it looks at all sorts of different criteria to fill it, such as geography, video popularity and my watch history. So, of course, if an infringing livestream is particularly popular and it also melds with my interests, there's a higher likelihood it'll surface. There doesn't seem to be any plans to change how Recommendations work at this time.

YouTube isn't doing itself any favors here. I wouldn't have even found these streams if YouTube itself didn't offer them up to me, thanks in part to its own algorithms. Sure, it can be hard to control what's live, and you can't always block people from streaming copyrighted content. But there has to be a way to prevent it from being so easy to find.

In this article: entertainment, gear, google, internet, youtube
All products recommended by Engadget are selected by our editorial team, independent of our parent company. Some of our stories include affiliate links. If you buy something through one of these links, we may earn an affiliate commission.