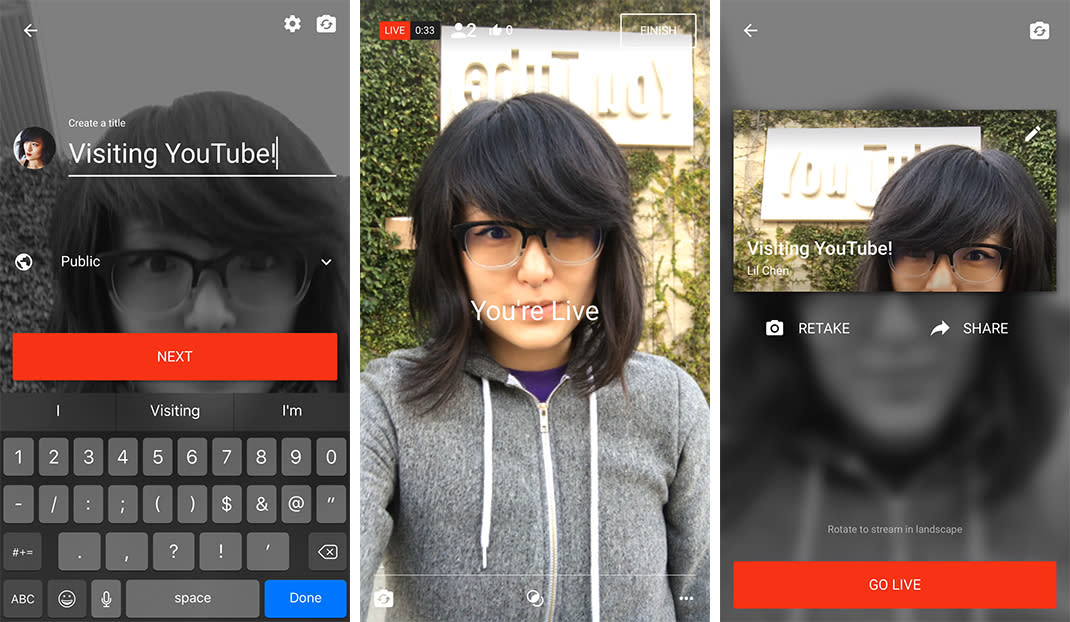 YouTube, despite its dominance in online video, has been slow to adopt mobile live streaming. While Twitter and Facebook have embraced the 'broadcast anywhere' mentality, Google has stuck mostly to Hangouts and other desktop-focused streaming setups. But that's all about to change. Following a small roll out last year, YouTube says it's ready to offer mobile live streaming to anyone with over 10,000 subscribers. While not everyone -- the team says "the rest of you will have it soon" -- the expansion should cover all of the big name YouTubers who have a large, ravenous audience.

The functionality remains unchanged, however. As before, you can set a custom title, enable or disable live chat, and choose to send a notification to all of your subscribers. You can broadcast in portrait or landscape and messages will appear on your screen as fast-moving bubbles. If you've used Periscope or Facebook Live before, you'll know exactly what to expect. Why Google has taken so long to roll-out the tool is unclear; the YouTube team says it's made some adjustments, such as slowing down live chat and "pushing for better streaming quality," but otherwise it's a mystery.

In the last six months, Facebook Live has grown exponentially. YouTube is still attractive -- that's where many video stars have the largest audience -- but it's a tougher sell for casual users. YouTube is banking on its reliability and "rock-solid infrastructure" to tempt people across, as well as a new "Super Chat" feature. Like Twitch and other live streaming services, this gives viewers the option to pay for a distinct, brightly colored message. It'll stay pinned to the top of the chat window for up to five hours, and earn creators another slice of cash as they converse with their fans in real-time.

In this article: broadcast, broadcasting, gear, google, livestreaming, mobilestreaming, services, streaming, youtube
All products recommended by Engadget are selected by our editorial team, independent of our parent company. Some of our stories include affiliate links. If you buy something through one of these links, we may earn an affiliate commission.