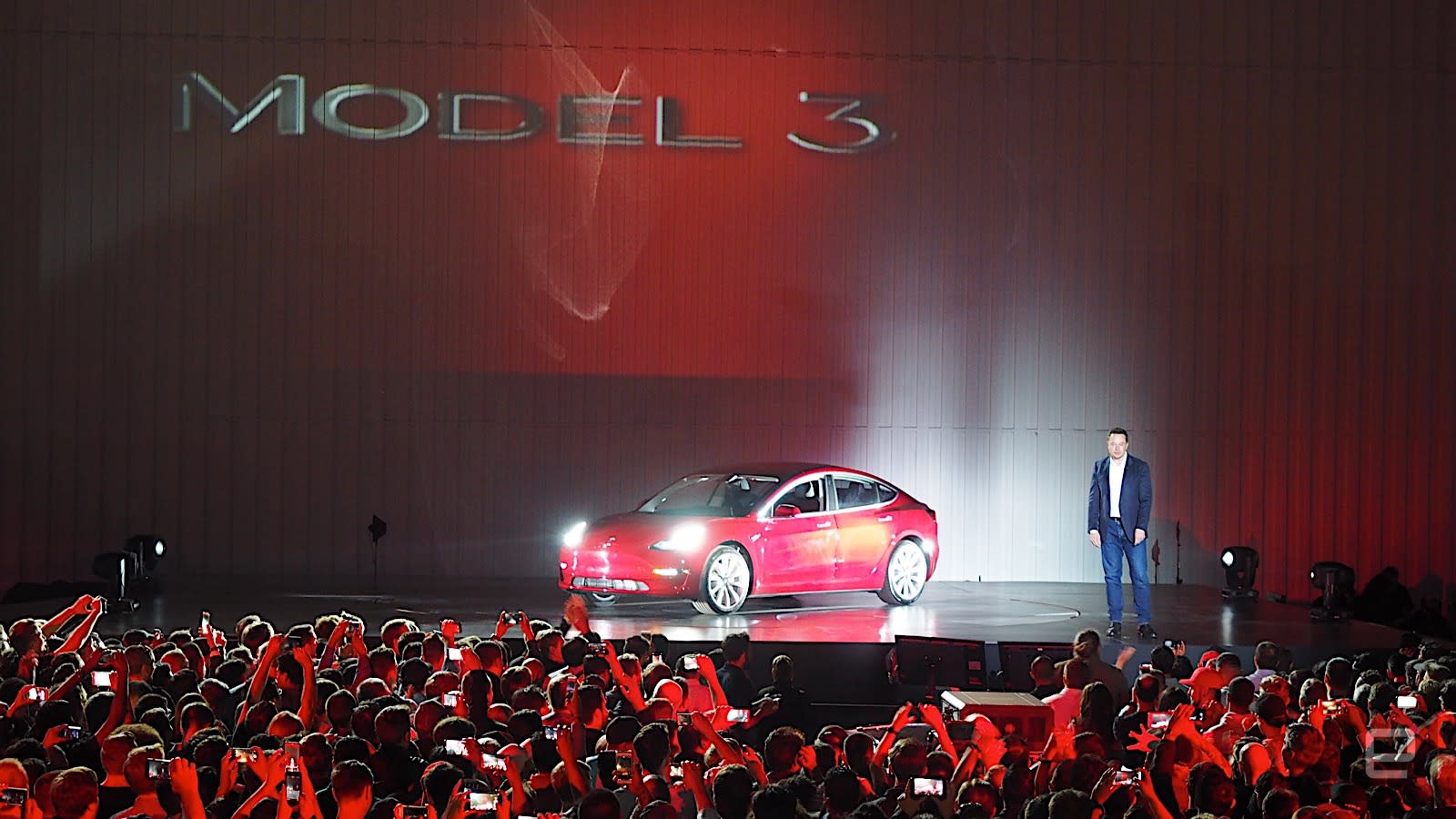 As Tesla CEO Elon Musk promised earlier this month, the company handed over the first 30 Model 3s to their new owners at a delivery ceremony in Fremont, California this Friday.

Update: And we took our first ride -- find out more details about the Model 3 right here.

The company will now shift its focus to ramping up production. Musk reportedly expects the Fremont production plant to build another 100 Model 3s in August, accelerating to 1,500 the following month and potentially hitting as many as 20,000 cars per month by the end of the year. However, even with those sorts of production numbers, it'll still take nearly two years to deliver Model 3s to all 400,000 people who've laid down $1,000 deposits since the program launched last March.

While the Model X SUV and Model S sedan served as (expensive) early standard bearers for the fledgling car company, the Model 3 is being billed as an electric car for the everyman. It is expected to retail for around $35,000 for the base model, though industry analysts have speculated buyers will be able to upgrade to a second motor for all-wheel drive capabilities or larger batteries for extended range. These options haven't yet been confirmed by the company and we'll likely have to wait until Tesla actually releases its order sheets before knowing exactly what sorts of bells and whistles the Model 3s will offer.

What we do know, thanks first to a leaked internal company document but which has since been confirmed by the company, is that the Model 3 will offer a 5.6 second 0-60 time, 130MPH tops speed, 220 mile range, space for 5 adults, and 15 cubic feet of cargo storage. It will offer supercharging capability, which notches 130 miles of range per 30 minutes of charge time. If you juice it back up through your home's 240V power system as well, though, that rate drops to 30 miles of range per hour. Other amenities include WiFi and LTE connectivity, voice activated controls, and Bluetooth.

As for options, you can score an extra-range battery which boosts the vehicle's range to 310 miles, ups the top speed to 140 MPH and drops a half second off the the 0-60 time to 5.1 seconds. You can also pick one of five special color options for $1,000 a pop or add 19-inch sport wheels for another $1,500. The Premium Upgrades Package retails for an extra $5,000 but gives you premium, powered, heated seats, fog lamps, heated sideview mirrors and a dual smartphone dock in the center console.

And of course this thing is autopilot-enabled. You'll just need to plunk down $5,000 for the Model 3 to get it to "match speed to traffic conditions, keep within a lane, automatically change lanes, transition from one freeway to another, exit the freeway and self-park at your destination," according to the company. The Model 3 can even offer "Full Self-Driving Capability" at some point "in the future" but it'll set you back $3,000 in addition to the five grand you dropped on the Enhanced Autopilot package.

The Model 3 will only sport a single 15-inch display screen (rather than the S's dual digital displays) and offer a far more streamlined customization process with fewer than 100 options for customers to choose from. The Model S, for comparison, boasts more than 1,500 customization schemes.

In this article: electricvehicle, ElobMusk, ev, gear, Model3, ModelS, Tesla, transportation
All products recommended by Engadget are selected by our editorial team, independent of our parent company. Some of our stories include affiliate links. If you buy something through one of these links, we may earn an affiliate commission.