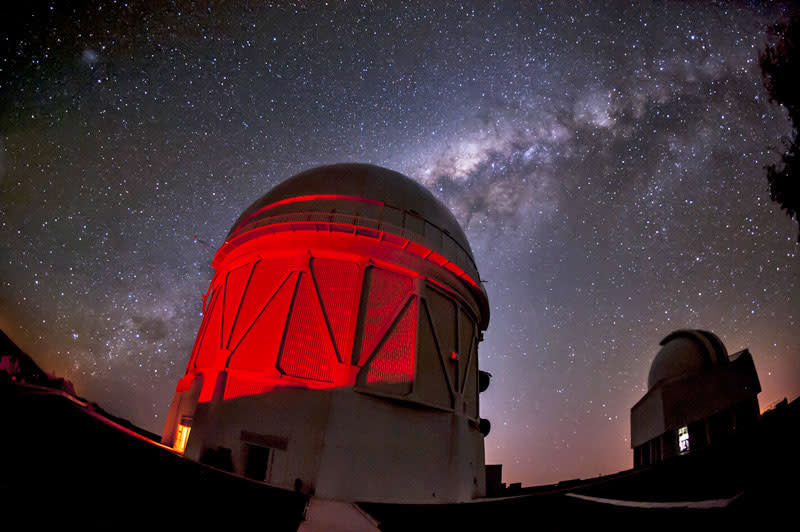 The results are in: As best we can tell, the universe clumps and expands just how we thought it did. That confirmation comes from the first results of a five-year survey wherein researchers took dark energy into account, observing much more recent cosmic activity than previous methods allowed. The new method: Strapping a 570-megapixel camera to a 4-meter telescope in the Chilean mountains and snapping photos of light streaming across space from as far back as 7 billion years ago.

This setup, known as the Dark Energy Camera (or DECam), shot its first photos back in 2012. Researchers used it for this study, the Dark Energy Survey (DES), an international effort that analyzed light from 26 million galaxies to learn how cosmic bodies have changed over the last 7 billion years. That spans the last half of our universe's lifespan, which is far more recent than the previous method, which used the European Space Agency's Planck telescope (retired in 2013) to scan cosmic background radiation from the origins of the universe.

"While Planck looked at the structure of the very early universe, DES has measured structures that evolved much later," Daniel Gruen, a NASA Einstein postdoctoral fellow at the Kavli Institute for Particle Astrophysics and Cosmology (KIPAC), said in a press release. "The growth of these structures from the early ages of the universe until today agrees with what our models predict, showing that we can describe cosmic evolution very well."

Sure, it's not quite as exciting when science doesn't upend everything we knew -- but it's pretty cool that cutting-edge methods reinforced what we'd previously theorized. Now we wait for further results as DES completes its five-year mission -- but if you want to read papers coming from the first year's results presented today at the 2017 Division of Particles and Fields meeting of the American Physical Society at the DOE's Fermi National Accelerator Laboratory, go nuts right here.