'Rez Infinite' on PC and VR is pure digital nirvana

It's a reminder that "Rez" is one of the best games ever made.

Rez has always been a game focused on immersing yourself in music and rhythm. Every version of the shooter, from its original launch on the Dreamcast and PlayStation 2 to last year's Rez Infinite on the PS4 and PS VR, has pushed that idea of immersion forward in some way. Now it's finally available on PCs ($25 on Steam and the Oculus Store) and in VR on the Oculus Rift and HTC Vive. And, not surprisingly, I found it to be a transcendental digital experience. In fact, I'd go as far as to say it's the purest expression of Rez so far.

First, a brief explanation of the glory of Rez. On the surface, it looks like a mere shooter. You control a wireframe avatar floating through a neon-lit environment, all the while blasting away at a variety of enemies. But instead of shooting in real time, you lock onto targets with a cursor and attack with waves of projectiles. Every enemy you hit produces a musical tone, and it's not long before you're creating a symphony of destruction atop the game's thumping electronic soundtrack.

Whereas most shooters focus on being as fast and hectic as possible, Rez is a meditative experience. Even when the screen is full of huge enemies, its methodical pace lets you drink everything happening around your avatar. While it's possible to get injured and die, it's more focused on enveloping you in its world than punishing you.

On PC, Rez Infinite looks better than ever, with support for resolutions up to 4K. That's something the PlayStation 4 Pro version of the game also offered, but the PC port can take full advantage of powerful graphics cards with better textures, anti-aliasing (which smooths down sharp edges) and more visual effects. You can also render the game at higher resolutions than your monitor -- for example, by forcing it to run at 1440p on a 1080p screen. That process, known as supersampling, makes Rez look even sharper.

While you could play Rez with a keyboard and mouse, it works best with an actual controller. Moving your character around with an analog stick is much more fulfilling than pounding keys, and vibrating controllers also let you feel the pulse of the game in your hands. I ended up using an Xbox One Elite Controller, but any modern gamepad should work too.

Like with the PS4 Pro release, Rez Infinite packs in the original version of the game along with Area X, an environment that lets you move around in 360 degrees, instead of just flying down a single path. The original Rez stages looked great on PC, but Area X, which is built atop the modern Unreal gaming engine, truly shines. The visuals are far richer, with more-complex models and support for bloom lighting (the extra bright effects that you see in newer games). 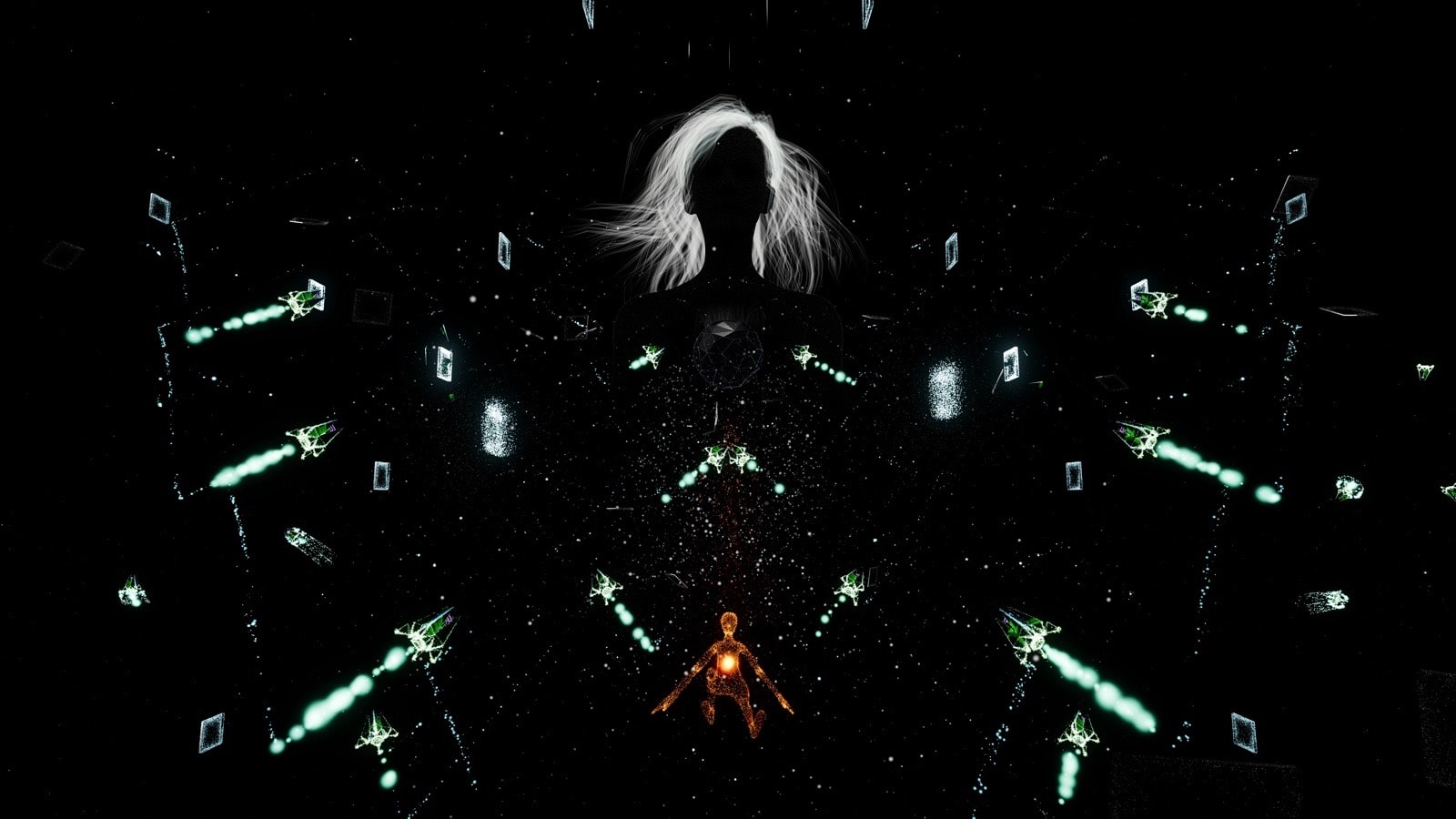 Rez Infinite succeeds at being the definitive version of the game as we know it. But its optional VR support takes things to another level. On an Oculus Rift, I truly grasped the sort of immersion Rez creator Tetsuya Mizuguchi originally dreamed of. Its world completely surrounds you in VR, instead of being restricted by a screen. I had the same realization when playing it on the PlayStation VR, but the Rift experience drove the concept home even further.

Thanks to the additional horsepower of my desktop rig and the new graphics options on the PC version of the game, Rez looked practically perfect in virtual reality. Textures had more detail, and the entire experience flowed more smoothly. The Oculus Touch controllers were also perfectly suited to the game. Their excellent motion tracking made targeting enemies a cinch -- almost too easy, at times. And since I had one in each hand instead of a gamepad, I also felt more connected to the world of Rez. Shooting might take some getting used to though. You can use triggers to target enemies in the classic game, but in Area X, you can only use the A button on the Rift (or the trackpad on the Vive). 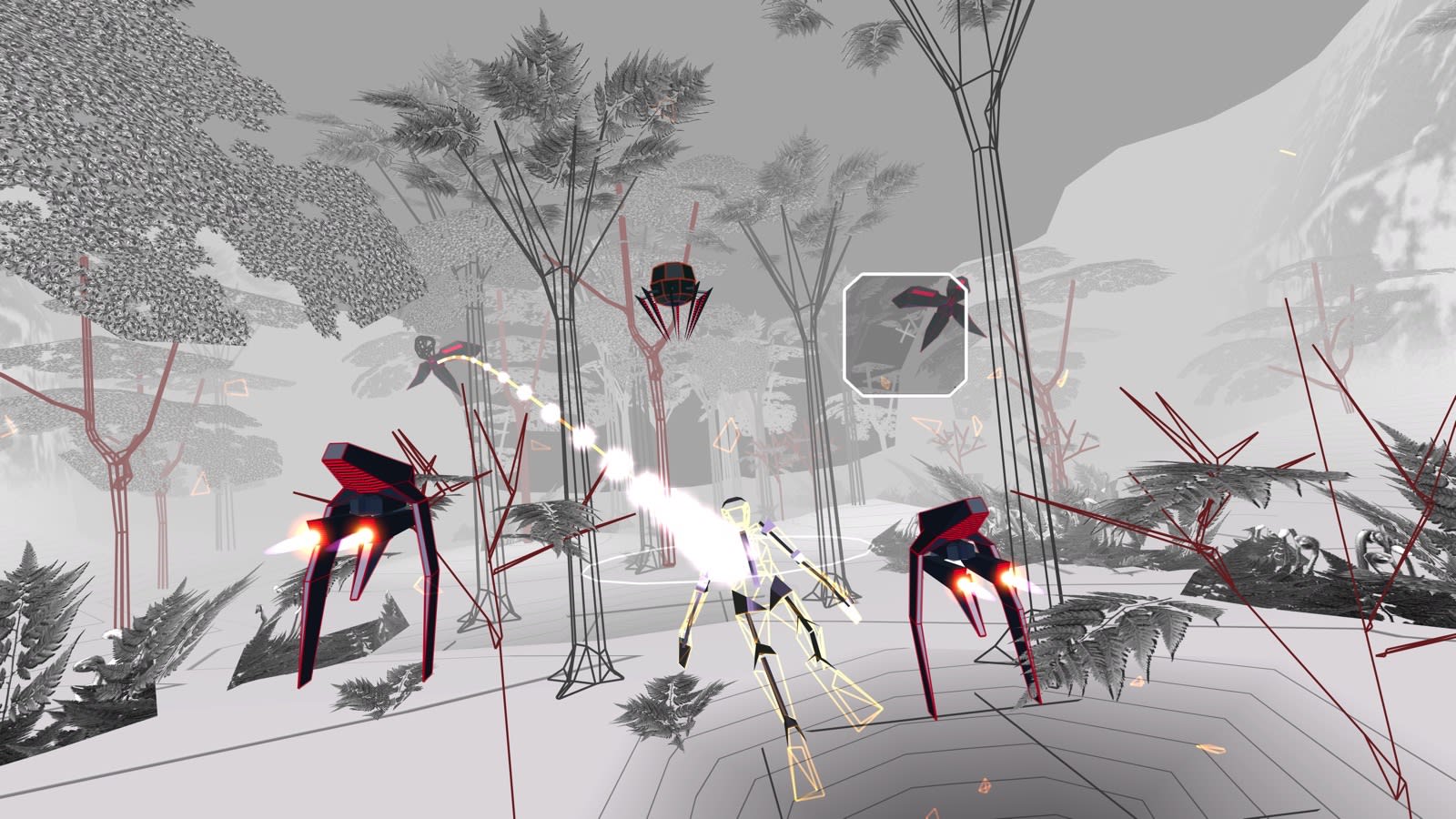 Since the game wasn't initially built for VR, the developers included several camera options to ease you into the experience. Standard mode takes away the fast camera movements from the original game while dynamic mode keeps them turned on (just avoid that one if you have motion sickness). There's also an advanced mode that reduces camera movements but keeps the game balanced like it was originally.

Once again, Area X was the standout experience in VR. Even as a somewhat jaded gamer who's played most major releases over the past decade, being immersed in Area X's lush environment left my jaw agape. It's the sort of experience that completely justifies buying a VR rig. By the end of the level, I drifted through 3D space, my pulse in sync with the music. My avatar, sitting in a lotus position, had achieved pure nirvana. And I was at peace.

All products recommended by Engadget are selected by our editorial team, independent of our parent company. Some of our stories include affiliate links. If you buy something through one of these links, we may earn an affiliate commission. All prices are correct at the time of publishing.
'Rez Infinite' on PC and VR is pure digital nirvana
art
av
EnhanceGames
gaming
hands-on
OculusRift
Rez
RezInfinite