But you'll have to pay dearly for the privilege of cord-free charging.

It's 2017 and many hardcore PC gamers are still devoted to their wired mice. Ask them why and you'll likely get two reasons: You don't have to worry about charging them, and there's no need to worry about potential latency issues. Either of those issues could be incredibly frustrating during the middle of a heated match.

That's why Logitech developed its PowerPlay system, which can wirelessly charge mice while they're sitting on a specialized mousepad. Together with the company's latest wireless technology, PowerPlay could finally be the first cord-free mouse to completely satisfy PC gamers.

The key to the system is its electromagnetic resonance charging technology, which sends power to the mouse without the need for any cords. The big, obvious benefit: You'll never have to think about charging your mouse, be it by installing new batteries or plugging in a USB cable. Currently, PowerPlay works with Logitech's G703 and G903 gaming mice, both of which feature the company's new Lightspeed technology. Basically, that means they deliver an extremely low latency of 1ms, so you don't have to worry about any lag. With those specs, they should be just as responsive as wired gaming mice. And in some cases, even more so, according to Logitech.

In my testing, the Powerplay charging mat worked just as advertised. It was truly strange to see my mouse's battery life go up after several hours of browsing the web and playing games. A small LED light turns on when the mouse is being charged, but otherwise the entire system is pretty discreet. Setting it up is a cinch, too: The mat plugs into your computer over USB, and you just have to plug Logitech's Powercore Module into the bottom of the mouse to get it ready. While you'd typically need to install a separate USB dongle for the Lightspeed mice, PowerPlay bundles all of that into the mat's receiver. 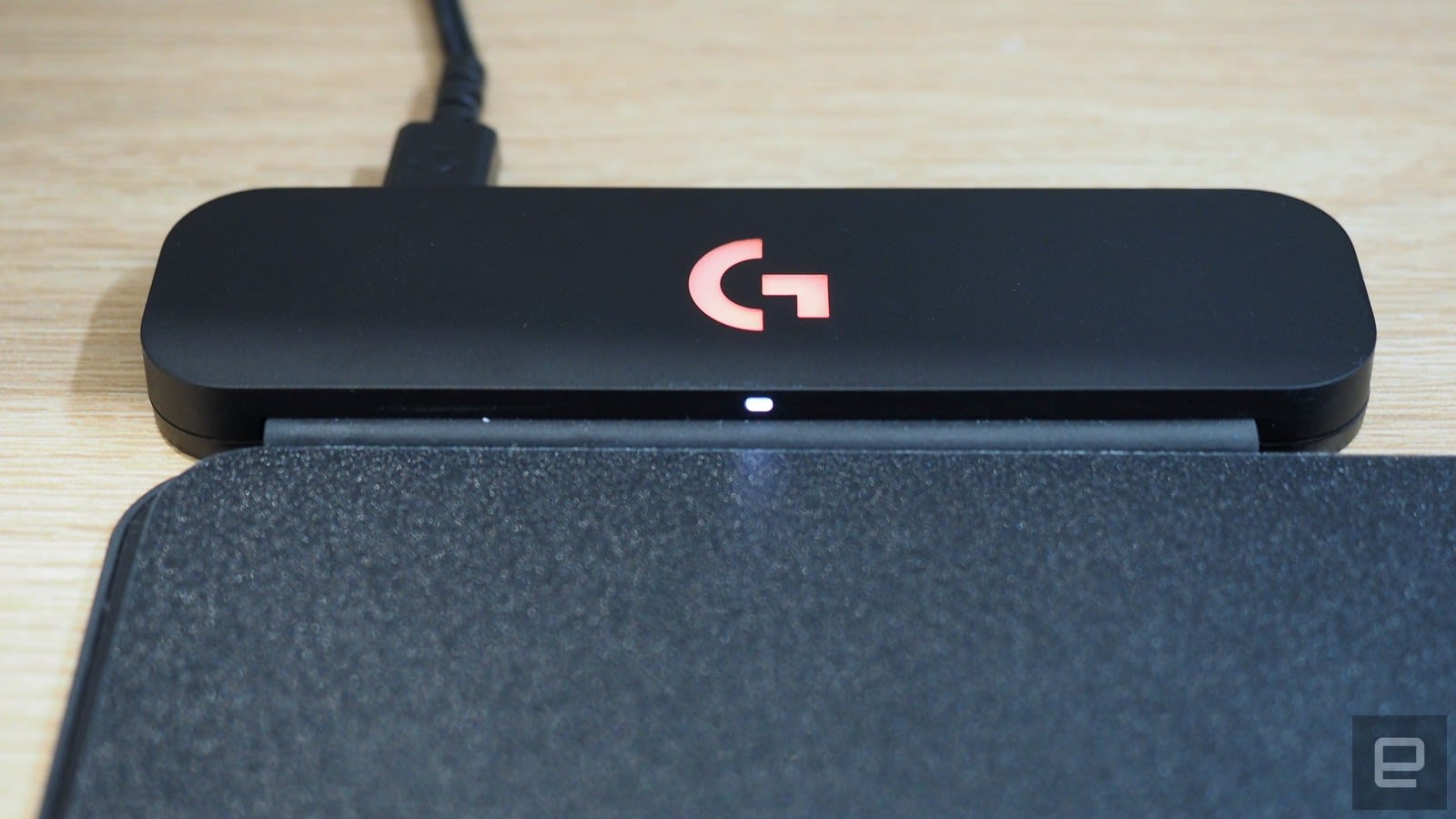 After that, put your mouse on the pad and you're good to go. The PowerPlay system comes with a soft cloth surface and a hard mousepad, both of which sit atop the rubbery charging surface. Since I typically use a metal mousing surface, I leaned toward the Powerplay's hard cover. But I know plenty of gamers who would prefer the softer alternative, especially when it comes to things like strategy games.

It wasn't long, though, before I noticed that Powerplay wasn't a great solution for charging mice quickly. Logitech claims it would take 12 to 14 hours to charge them completely when they're not in use (and of course, your computer has to be on the whole time). They'll still get power when you're using them, but it takes significantly longer to complete a charge cycle. Technically, that's not a huge problem, since you'll be using them on a charging surface anyway. But that could be anxiety-inducing if you're used to taking your mouse on the go.

If that's the sort of thing that bugs you, my recommendation is to plug a USB cable into your mouse directly just to reach that first full charge. Both the G703 and the G903 should get between 24 and 32 hours of battery life when away from the charging mat, according to Logitech. 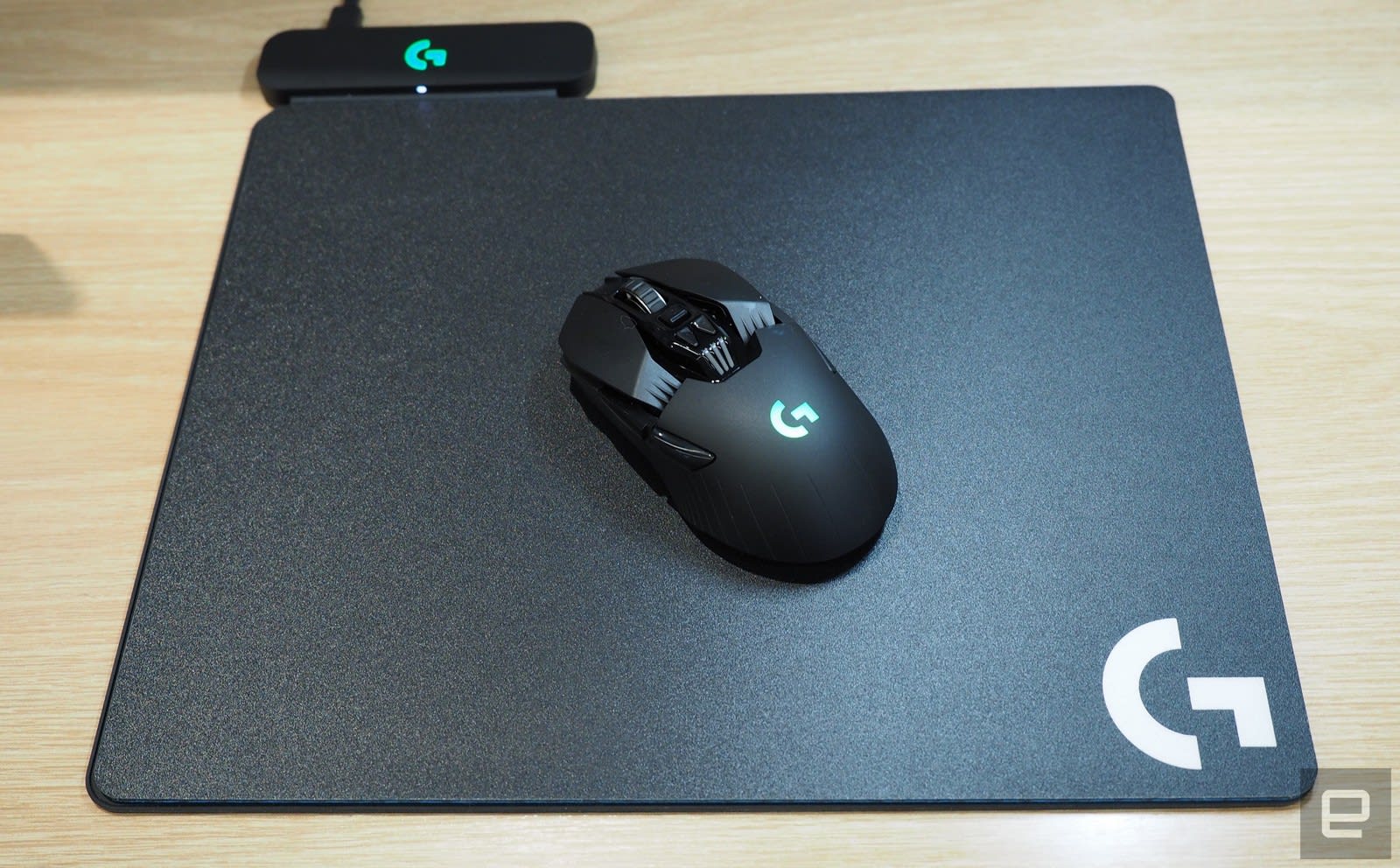 Once I was up and running, the combination of Powerplay and Lightspeed made for a revelatory mousing experience. It felt strange not to worry about battery life while also having the freedom of wireless. Both were also very responsive in games like Overwatch and Playerunknown's Battlegrounds. I could achieve head shots with ease, and since the mousing surface is so large, I didn't have to worry about awkwardly lifting up the mouse for any quick movement.

Since I've been using Logitech's wireless mice for gaming over the past few years, I didn't need much convincing about the virtues of cutting the cord. I've never noticed latency issues with wireless mice, and I'm far more bothered by the awkwardness of managing a cord with a traditional mouse.

The PowerPlay system's biggest issue is its $100 price. Once you add another $100 for the G703, or a cool $150 for the G903, you're basically dropping a lot of money just for the privilege of charging your mouse wirelessly. Ultimately, PowerPlay is a great first stop for Logitech, since it proves how useful cordless power could be. Most gamers, though, will be better off charging their mice the old-fashioned way.