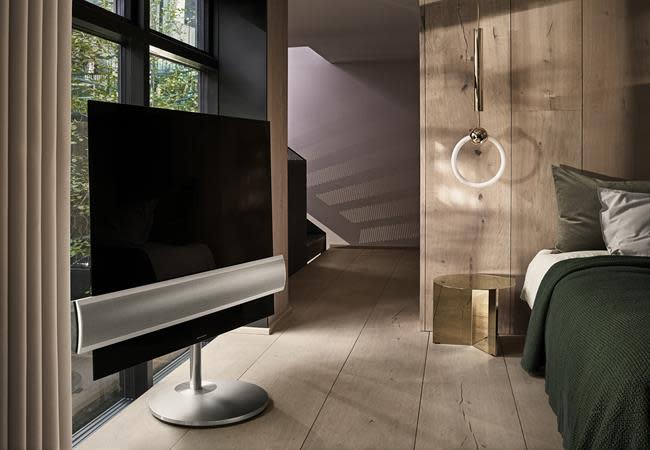 A partnership between Bang & Olufsen (B&O) and LG has long been in the offing, and now the fruits of its labor have been unveiled at IFA 2017, in the form of the BeoVision Eclipse. The AV lovechild blends B&O's audio expertise and design craftsmanship with LG's renowned OLED technology to create a top-of-the-line television that predictably boasts a raft of impressive specs, and perhaps less predictably, a fairly controversial design.

An OLED 4K screen, integrated 450-watt three-channel sound center and LG's most recent webOS 3.5 platform means the Eclipse does its job as a TV and does it exceptionally well. And it's helpful, too. The BeoRemote One BT has been updated with shortcuts, and the motorized floor stand not only swivels but actually moves the TV across the floor at the push of a button, where it can be adjusted for any seating position.

But no matter where you're sat, you won't be able to escape the Eclipse's biggest design feature: the sound bar that's been slapped right across the slim glass screen, extending beyond either side. Now, according to B&O vice president Stefan K, Persson, the TV's name, Eclipse, was chosen to represent "two outstanding objects meeting and creating something even more spectacular and beautiful". It is certainly true that two objects have met here, but the result feels less like the beautiful creation of a partnership and more like two major companies jamming bits of technology together in a bid to create, well, something. Frankenstein's TV, if you will. Still, its aesthetic will appeal to design fans, and you can't argue with the goods inside it, which account for its (also) predictably high price tag. BeoVision Eclipse will be available in September as a 55-inch for $10,990/£8,920 and a 65-inch for $15,990/£11,590.

In this article: 4K, audio, av, BangAndOlufsen, BeoVision, Eclipse, gear, ifa2017, LG, OLED, soundbar, visual
All products recommended by Engadget are selected by our editorial team, independent of our parent company. Some of our stories include affiliate links. If you buy something through one of these links, we may earn an affiliate commission.