The car is a worthy successor to the popular EV.

Nissan's pure EV Leaf has been largely dominating the electric car market for seven years. So a refresh has been a long time coming. This week the company finally unveiled a vehicle with a higher range, an optional semi-autonomous feature and one-pedal driving. None of this is is necessarily groundbreaking, but after being behind the wheel of a preproduction model in Las Vegas, it's apparent to me that the automobile is ready to take on the latest crop of electric cars.

The four-door hatchback has all the usual traits of an electric vehicle: super quiet ride, instant-on torque and no need to stop by the local gas station. But the big news is the Leaf's 150-mile range. It's a 43-mile improvement over the previous model but far below the Chevy Bolt (238 miles) and Model 3 (220 miles). But what it lacks in distance it makes up with in value. It's about $5,000 cheaper than both of those cars, coming in at about $30,000 for the base model.

If you're looking to take advantage of the ProPilot semiautonomous feature, be prepared to drop some cash. For the midrange Leaf SV, which starts at $32,490 (and adds Android Auto and CarPlay to the infotainment system), it's part of a $2,200 tech package. On the high-end $36,200 SL, it's a $600 option. Of course, all of these prices are before the $7,500 federal tax credit. 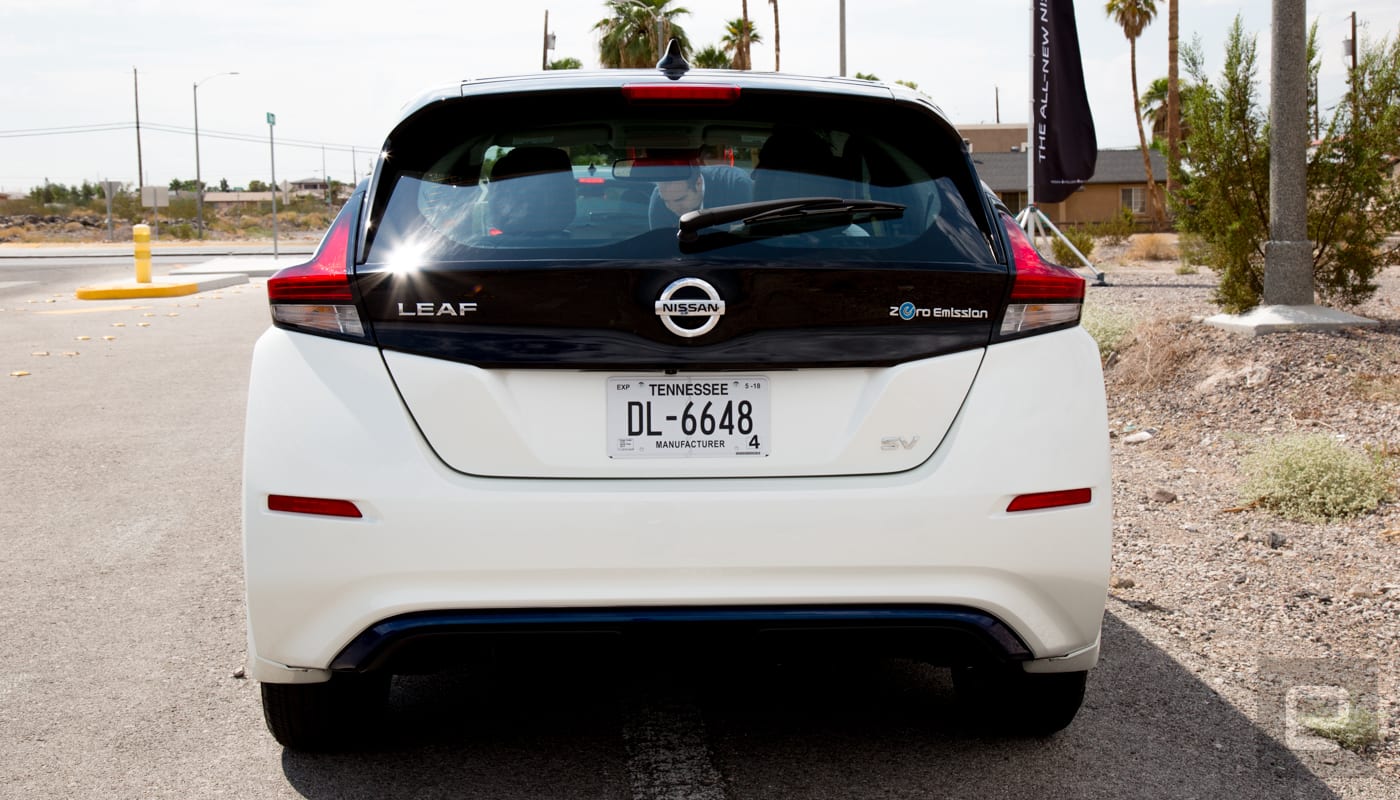 Fortunately, if you're constantly stuck in traffic (and sadly, that's pretty much the norm now), the ProPilot feature is worth it if you're splurging for the SV or SL. That being said, the SL is easier to justify. Like nearly all of these sort of self-driving systems, its lane-assist is coupled with adaptive cruise control. Using a front-facing camera radar, the car keeps track of lane markers and the vehicle ahead of it.

During my test drive, it did a splendid job of staying in its lane and tracking the car ahead of it. One thing I did notice is that when you adjust the distance between yourself and the automobile in front of you, it's slow to back off or speed up. It's a smooth transition that some people might appreciate but more-aggressive drivers may find annoying. The actual lane tracking did a fine job handling gentle curves. Like other camera-based systems, though, it's dependent on the contrast between the asphalt and the painted line. Snow and heavy rain will disable it while faded lines will hamper its ability to see where it's going.

But on a sunny Vegas day this week, it worked without any issues. Unfortunately, during the test drive I never encountered stop-and-go traffic, so I couldn't test how well the system handles coming to complete stop and moving again in ProPilot mode. Nissan says the car will come to rest on its own; when traffic moves again, the driver can press the ProPilot button for a few seconds to join the flow. 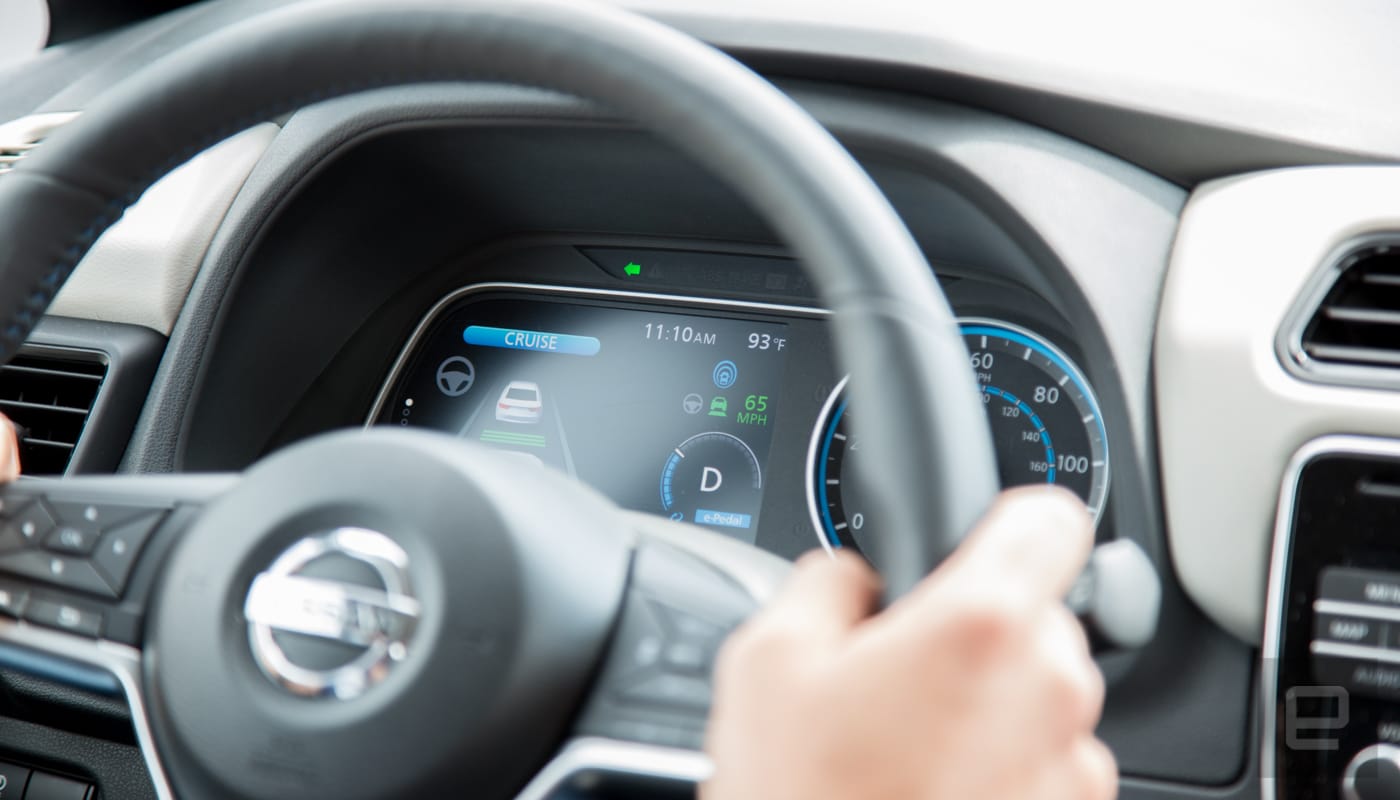 One feature that's standard across the entire line is e-Pedal one-pedal driving. With this enabled, the car sets the regenerative braking to maximum and will bring the car to a complete stop and hold it there even on a hill. In my test, it held the car on some mild off-ramp grades. The automaker notes that the car uses the actual brake pads to keep the car stationary instead of just relying on the motor -- a smart move that removes the strain from the drivetrain and reduces any sort of residual creep. It'll be interesting to see how well the system works on San Francisco's mini mountains.

I can see how e-Pedal could be helpful in both highway and surface street settings. Reduce pressure on the accelerator and the cars begins to slow; remove your foot completely and it stops. Its regenerative braking is great for optimizing efficiency, and after a few miles, its value becomes apparent. I will note that it didn't slow down as quickly as I expected the first few times I tried it. But after some trial and error, I got better at judging when I could remove my foot from the gas.

For regular non-traffic driving, the new Leaf is a spirited little car. With 146 horsepower and 236 foot-pounds of torque, it's faster than its predecessor but not as quick as the Bolt. The route picked out for the drive didn't lend itself to any true handling tests, but the car's suspension is on par with other vehicles in this range. It's smooth, but you're going to notice potholes.

The interior was roomy with a deeper-than-expected trunk. Typically that space is taken up by a spare tire or batteries. The back seat was also surprisingly roomy for my six-foot three-inch frame. 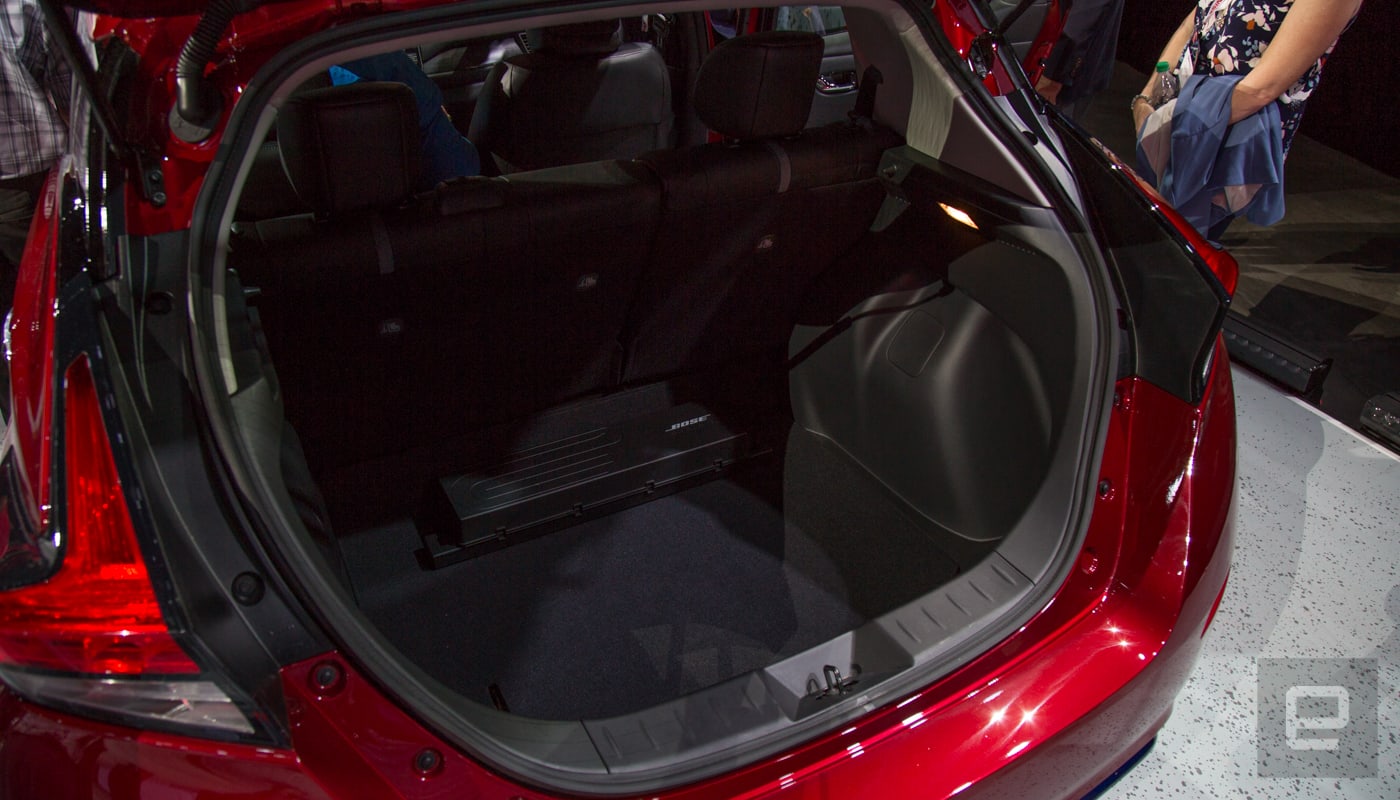 Behind the wheel, everything makes sense. The climate controls are physical buttons (woo-hoo!), with other aspects of the car shoved into the infotainment system. The dash cluster is informative but can get a bit overwhelming as you enable more and more options. Like other automakers, Nissan has decided to use a weird shifter. It's a black-and-blue puck that's simple to operate, even if it's odd looking.

Overall the 2018 Nissan Leaf is a worthy successor to one of the top-selling EVs of all time. It's disappointing that it tops out at 150 miles, but Nissan has said that another version of the car will launch next year with more power and more range. The real question is, do you buy one now or wait until the next version of the Leaf hits showrooms? Throw in the quagmire of determining if a $5,000 savings is worth losing about 80 miles in range and the electric car market is starting to look more and more like the world of traditional gas cars -- slightly confusing but ultimately good for the consumer, because choice and competition push quality and innovation forward.