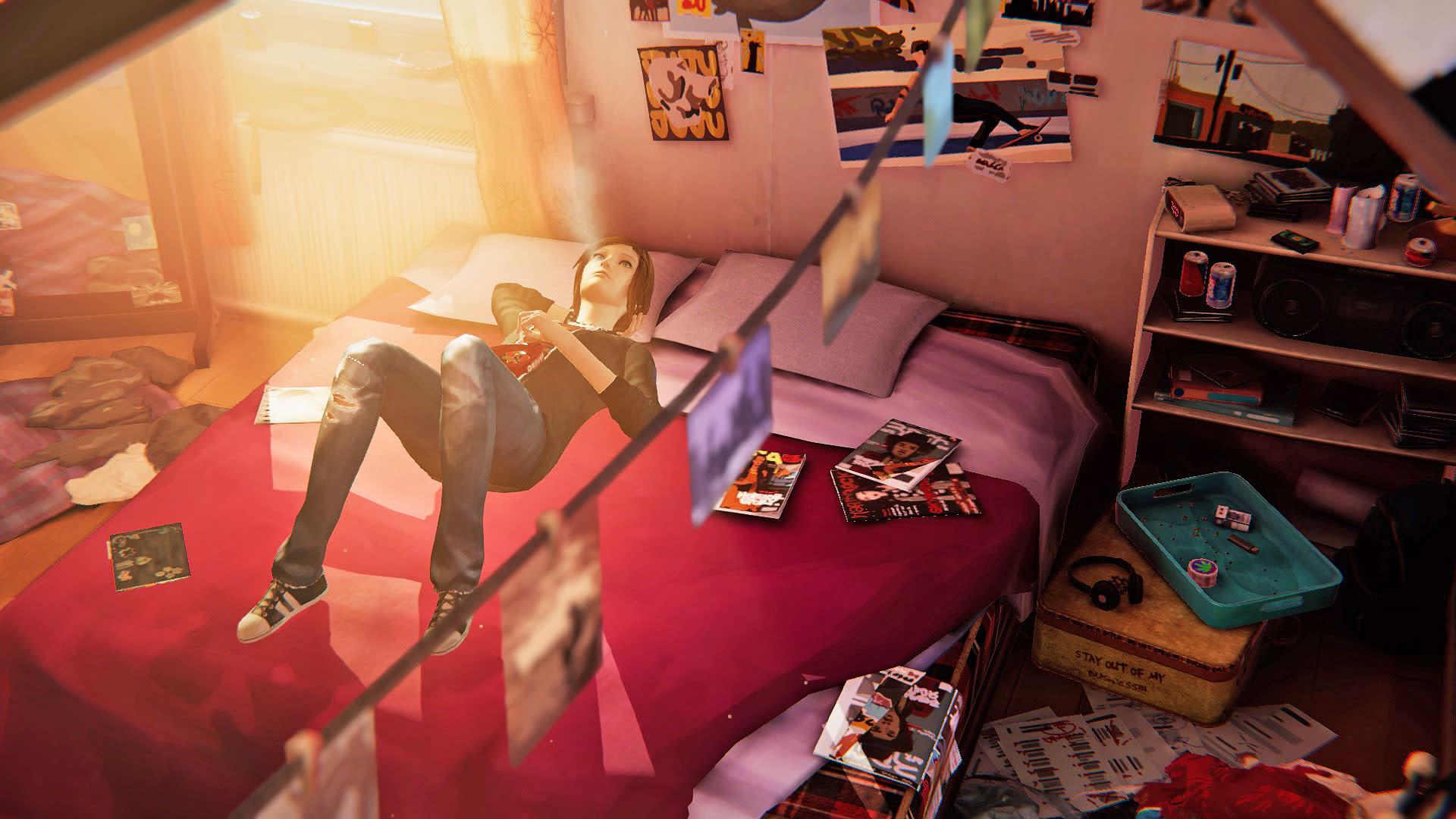 Setting fire to teenage souls in 'Life Is Strange: Before the Storm'

Tim and Jess explore their own angsty pasts to dissect Deck Nine's prequel.

There are plenty of reasons to be wary of Life Is Strange: Before the Storm -- it's the prequel to a highly successful, influential series, but it isn't being handled by the same development team. This time around, Deck Nine is in charge of a three-episode arc featuring two of the most mysterious characters from the full series. Even the voice actor for Chloe, the game's main foil, has been swapped out for someone new. The circumstances are ripe for Before the Storm to become a flimsy parody of Life Is Strange, full of shallow awkwardness and referential quasi-humor.

Luckily, that's not what happened. Before the Storm slides into the Life Is Strange library like butter, opening up storylines that were only hinted at in the full game. Part of this insight surely comes from Chloe's original voice actor, (the Emmy-winning) Ashly Burch, who stayed on as a writing consultant for the prequel.

But just because Before the Storm isn't an embarrassment to the Life Is Strange brand doesn't mean it's perfect. Engadget associate writer Timothy J. Seppala and senior reporter Jessica Conditt found different delights and drags in the first episode of Before the Storm, largely influenced by their own experiences as teenagers.

Spoilers for the entire Life is Strange series, including Before the Storm, reside below; you've been warned.

I've never related to a video game character the way I do to Chloe Price. She's a passionate, unapologetic teenager filled with rage, but at the same time, she craves love. And, despite her propensity to piss people off, she isn't afraid to chase that feeling when she finds it. When Chloe runs into Rachel Amber -- her school's prima donna -- at a late-night concert in an abandoned mill, she's thrust into a whirlwind of attraction, confusion, day drinking and train-hopping. She runs with her feelings, completely. Chloe contains multitudes, and in its first episode, Life Is Strange: Before the Storm isn't afraid to show the depths of her disparate sides.

But maybe that's just how I'm playing her. Maybe one of the reasons I relate so much to Chloe (despite the fact that she's essentially the cool kid I thought I was in high school, down to the Illuminati-branded tank top and black bra) is because I get to choose how she responds to the most important moments in the game. I get to choose what kind of love she feels for Rachel Amber and whether she plays a round of D&D with some acquaintances before class -- Chloe's story is mine to mold. However, shaping her story would not be nearly as satisfying if the choices presented felt inauthentic to the experiences of a suburban teenage girl. This is where developer Deck Nine hits gold -- in shaping Chloe's attitude, internal monologue and actions, they've built a truly believable person. A relatable one, even.

Tim, I'm curious how you feel playing Chloe, without the baggage of actually having been an angry, mosh-pit-diving teenage girl yourself.

Well, I was more of a mosh-pit-avoiding guy because I wear glasses and was going to Slipknot and Slayer shows in high school, but I digress. When I started the game, I was thrown off a bit by how awkward everything felt. The way Deck Nine wrote Chloe in the first half just felt hollow. Hopping a gate with a "no trespassing" sign and then giving it the finger, scrawling Sharpie graffiti for her favorite band on a high school wall and somehow being $175 in arrears with her weed guy all felt like a paint-by-numbers picture of teen angst, telling rather than showing in those early moments.

Let's be real, though: The first game was awkward too, especially in its opening moments with Max reciting dialogue about DSLRs and plasma TVs. But it was an adorable sort of awkward. Here it felt like a cringey type of awkward. Max and Chloe aren't the same person, however. The former is meek and mild, and as you said, Chloe is a badass. Maybe it's because I tried not getting in trouble with my parents on a regular basis, but Chloe's heated interactions with hers didn't feel genuine or believable. So, I made amends with her mom (while speaking my mind about her boyfriend) and offered an olive branch to said boyfriend on the ride to Blackwell. That's when Chole started to feel more genuine.

Further empathy came when I was guiding her around her living room and I stumbled upon a wilted plant. Her only job around the house was to water the plant, and she wistfully recalls that it was her dad's job to remind her to do it. After her dad died, she forgot and it started to shrivel. I was really young when my grandma passed, and as such, the plant I brought home from the funeral perished in short order because I forgot to water it for a week. To this day I feel awful if one of my houseplants dies.

The relationship between Chloe and Rachel didn't feel like something real until I hopped in a northbound boxcar. Did you notice any sort of clear dividing line, or was that just me?

All teenagers are hollow, banal shells of the humans they might one day become.

OK, that's not 100 percent true, but I stand by the sentiment -- I actually found those cliche moments of teenage angst to be charming, but only because being a teenager is inherently cliche. Flipping off a "no trespassing" sign may not be the most innovative move, but it's also something a self-proclaimed teenage dirtbag would definitely do. Or maybe it's just something I would have done (or, did) when I was a teenager. Maybe I'm a cliche, Tim, and you just called me out for the entire internet to see. Thanks, friend.

I didn't feel the dividing line you're talking about, but I definitely enjoyed the second half of the episode, once the tense dynamic between Chloe and Rachel Amber really took off. One of my favorite aspects of this first installment is the amount of breathing room Deck Nine gives players, and this really hits home the first time Chloe steps onto the grounds of Blackwell Academy. As in the original Life Is Strange series, Before the Storm incorporates optional moments of contemplation, where Chloe can simply sit on a box, on a bench, in front of a fire pit, and think about her place in the world. This is where Chloe comes alive, for me -- her attitude is reactionary and brash, but her internal monologue is thoughtful and introspective. The camera pans around her as she stills, thinking about her mother, Rachel Amber, her father, herself or her best friend, Max, who's suddenly disappeared from her life.

Not everyone will take advantage of these scenes, which I think is fitting. These are personal, quiet moments that most emotionally fueled teenagers would attempt to hide from the rest of the world, after all. But that's not where the breathing room ends -- Before the Storm invites players to exist in its environments, simply exploring the scenery and talking to people. And that D&D game I mentioned earlier? It's one of my favorite scenes, but it's completely optional. If you choose to play, Chloe sits at an outside table with two of her classmates. There's no music, and nothing else to distract from the game-within-a-game. Wind rustles the trees. It's immensely peaceful.

I really liked those moments of quiet reflection. A ton. Chloe sitting on a crate silently pondering life while a "stay off the stage" sign hangs in the foreground said more to me about her rebellious streak than an argument about spark plugs with her mom's new boyfriend did. Speaking of squabbles, I want to talk about Storm's gamey new "Backtalk" conversation system where you can try your hand at winning one by using guile. Whether the end result was sassing my way into the aforementioned sawmill concert or stealing a bottle of wine from some picnickers, I'm not sure I liked how I got to the end point. Listening for the "right" clues and then picking the dialogue options that to which they correlated to advance the conversation felt a little too gamey for me. I love branching dialogue systems in games, but here, I felt forced and constricted. Picking the wrong option meant the segment would end, versus changing and adapting to my response. It kind of killed any sense of experimentation for me, which is the exact opposite of what the first game's time-rewind mechanic did.

Did you like it? Also, we've been dancing around it for a bit now, but we need to talk about that fire. Given that this story is only three episodes long, I was wondering how long it'd take for shit to get real, and man, I did not expect Rachel cathartically burning a photo of her dad to set Arcadia Bay's forest ablaze. I mean, it didn't help that she kicked over the garbage can holding the flaming photo, but I didn't expect the fire to grow how it did. But that's fire for you.

Arcadia Bay is basically Gotham -- it's always in danger of absolute destruction. I actually enjoyed the Backtalk mechanic and the fact that you could "lose" the conversation at any moment. The game itself leans so heavily on traditional branching-dialogue systems that I thought it was a thrill to up the stakes. And, honestly, I think I only lost one of the conversations.

The first Life Is Strange didn't need Backtalk because the time-control mechanics naturally infused action into the game. Without time travel, I think Backtalk works just fine in Before the Storm. But, yes, let's talk about that fire. It's a dramatic way to end the first episode, but I think Deck Nine did a good job of leading players to such an explosive point. Chloe loses her goddamn mind in the junkyard (and it feels so, so cathartic), and then she confronts Rachel Amber, the physical embodiment of her demons and desires, about her fickle behavior over the past 24 hours. The conversation is fervent and revelatory, and it builds into a crescendo that can only be visualized by a massive wildfire. By the time the flames have consumed the tree, it looks like Rachel Amber's misery is literally feeding the fire, helping it grow. That kind of supernatural teenage power is par for the course, for Arcadia Bay.

Maybe I've read so many young-adult fantasy books that my tolerance for melodrama is higher than most, but the fire feels right to me. Plus, it sets up the next two episodes nicely -- there's now a physical threat burning beneath Chloe and Rachel Amber's relationship, potentially forcing them into intense situations. Since this is a prequel, we know how it ends -- but with just three episodes to tell a profoundly emotional story, the fire can serve as fuel for more action, thrills and deeper conversations. I think the most satisfying way to play Before the Storm is to really lean into Chloe's pissed-off, devil-may-care outlook on life. Fight with her wannabe step-dad and revel in his disgust; use her devious cunning to outsmart the principal; tell Rachel Amber how Chloe really feels about her behavior and watch as their conversation sets fire to the city. This is exactly how I remember feeling as a teenager -- as if my emotions could burn down the world. I'm excited to see what happens when they do just that.