It was just 73 pounds of plutonium, guys.

Capt. Scott Kelly wasn't kidding when he famously quipped that "space is hard." Even getting to the launch pad can prove to be a daunting challenge. Take the Cassini mission to study Saturn, for example. Despite an investment of $3.4 billion and nearly a decade of development, Cassini wound up being very nearly scuttled at the last minute by protesters who thought they knew better than a federal agency that has put multiple men on the moon. Geez guys, it was just 73 pounds of plutonium riding aboard that Saturn orbiter -- it wouldn't have caused that much damage had something gone horribly wrong at launch.

The Cassini mission, named after the 17th-century Italian-French astronomer Jean-Dominique Cassini, marks the end of an era for NASA. It is likely the final "flagship-class" mission (those costing more than $1 billion) fielded by the space agency if NASA Administrator Charles Bolden's claims from 2013 are still accurate. Other flagships included the vaunted Viking and Voyager missions as well as the Mars Curiosity rover and the Hubble Space Telescope. The Cassini mission started in 1982 when the European Science Foundation and NASA were still kicking around the idea of conducting their own respective solo missions to Saturn. Despite an impassioned report from astronaut Sally Ride in 1986, titled NASA Leadership and America's Future in Space, NASA and the ESA decided to go in halfsies on a joint mission.

However, by 1994, the mission's Congressional critics had begun to question the value of such a mission. The program had already eclipsed $3.3 billion in development costs -- that's $5 billion in 2017 money, adjusted for inflation, or about half of what we spent on the new James Webb Space Telescope. It was only because the ESA was also contributing funds to the mission and NASA was able to demonstrate that technology developed for Cassini would carry over to the Mars Global Surveyor, Mars Pathfinder and the Spitzer Space Telescope projects that this one was allowed to move forward.

That forward momentum came to a sudden halt three years later and just a day after then-President Clinton approved the mission. On October 4th, 1997, 800 protesters showed up (27 of which were arrested) at Cape Canaveral Air Force Station in opposition to the Cassini launch, which was then scheduled for October 7th. 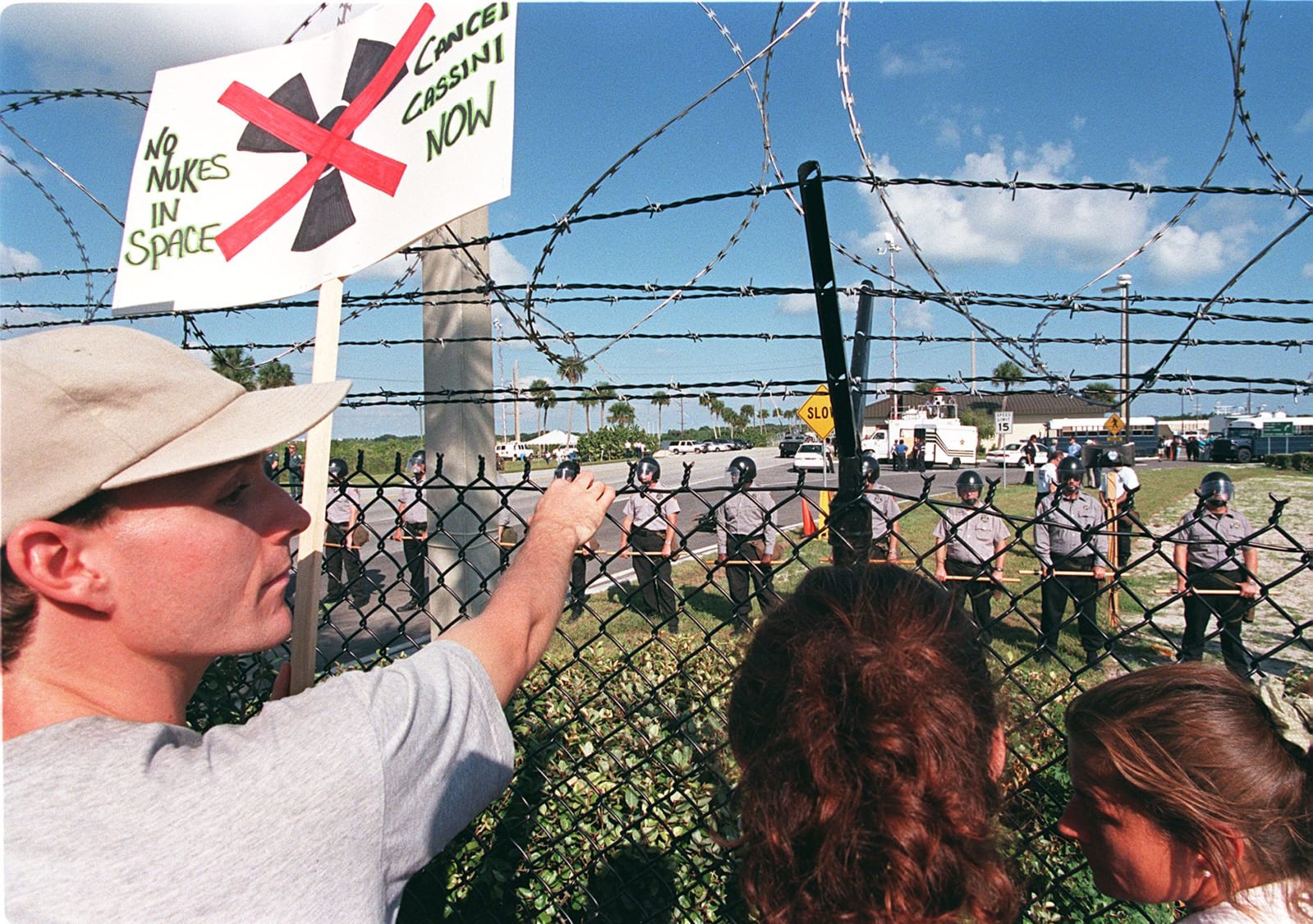 Protesters outside of Cape Canaveral

The protesters were worried that, should the Titan IV rocket ferrying the orbiter into space suffer a catastrophic mishap during launch, it would vaporize the 73 pounds of Plutonium-238 that the Cassini carried and spread radioactive fallout across central Florida. The protesters were even more worried about that Cassini's upcoming gravitational slingshot, which would use the Earth's pull to accelerate the spacecraft into the outer solar system, could spread fallout across the globe, should Cassini accidentally re-enter orbit during the maneuver. The Green Party even went so far as to file a federal lawsuit against the government in a Hawaiian court to halt the launch.

"Winds can blow [plutonium] into Disney World, Universal City, into the citrus industry and destroy the economy of central Florida," Michio Kaku, professor of theoretical physics at the City College of New York, told Mother Jones. He calculated that as many as a million people could be exposed to radiation if the launch went wrong.

The protesters' issue focused on, again, the 73 pounds of plutonium-238 aboard the Cassini orbiter. This wasn't the first time that NASA had used radioactive materials as a power source for its long-endurance spacecraft -- New Horizons, Galileo, and Ulysses all carried similar setups -- but none had ever carried this much Pu-238 at one time before. The orbiter actually employed three radioisotope thermoelectric generators (RTGs) during its 11-year mission. They're not for propulsion, mind you (that's what the gravitational slingshots were for), but rather a means to power the onboard scientific instruments for the duration of the trip. RTGs are fairly simple devices and have been used for both civilian and military applications since their development in the 1950s. They consist of a container of radioactive material with a pair of thermocouples attached to the outside. The opposite end of each thermocouple is also attached to a heat sink. As the material decays, it produces heat. The difference in temperature between the container and the heatsink enables the thermocouples to generate an electrical charge. It's the same principle that allows camp stoves to also charge your phone.

Cassini's instruments aren't particularly power-hungry, drawing around 600-700 watts of electricity, but 11 years is a long time in the cold depths of interplanetary space. So why not just use solar panels, Cassini protesters argued, as NASA had for a bunch of other missions? The problem with that is the sheer distance between Saturn and the Sun -- 888 million miles on average. NASA did actually look into outfitting Cassini with solar panels but the math simply didn't work.

The Mars Rover does well enough with solar power, for example, but it's six times closer to the Sun than Saturn. In order to produce the requisite wattage while in Saturn's orbit, the Cassini would have had to sport panels the size of tennis courts. These would have had proven too bulky and too heavy to get the orbiter out of Earth's atmosphere. Plutonium-238 is 280 times more radioactive than Plutonium-239, the stuff we use to make nuclear weapons, and has a half life of 88 years. That makes it a potent and long-lasting power source. What's more, the alpha particles that Pu-238 emits can't penetrate further than a few cellular levels, so the biggest threat comes from inhaling the stuff. However, "it cannot be exploded like a bomb," Beverly Cook of the Energy Department, told CNN. "It is an alpha emitter. Alpha radiation can be stopped by a piece of paper."

The chances of having Cassini's payload of nuclear material vaporize during a catastrophic engineering failure were exceedingly remote, according to NASA. "This is not a nuclear reactor. They are nuclear batteries," Wes Huntress, associate administrator for space science at NASA, explained to PBS Newshour. "They're not used for propulsion. It's not a nuclear power plant. We don't have any nuclear reactions going on. We simply use the isotope to generate heat, and from the heat, we generate electricity for the spacecraft."

Even so, NASA spent a lot of time working out how to most safely utilize a plutonium-based power source. First, NASA isn't just shoving glowing green rocks into the RTG and closing the hatch. The Plutonium-238 that NASA sends to space is actually plutonium dioxide, a more inert version that is produced exclusively for space missions by the Department of Energy. They're basically marshmallow-sized insoluble ceramic nuggets. 72 of these were encased in iridium and graphite containers capable of the ludicrously intense heat generated during atmospheric reentry, much less a piddly launchpad explosion. And even if the pellets were exposed to vast amounts of heat, they're designed to break down into chunks rather than vaporize, further reducing the chances that someone will breathe them in.

And, as for the dangers posed by a botched gravitational assist, Huntress was not impressed by the protesters' reasoning. "This Earth fly-by is something that we have done many, many times before at other planets, as well as at Earth, the last time being with the Galileo nuclear-powered spacecraft," he told PBS. "And we manage these things with very high precision. And Cassini is, in fact, not coming nearly as close to the Earth as did Galileo and Galileo's approach managed with very fine -- 1-kilometer accuracy -- with no difficulty whatsoever."

Despite these assurances, many of the protesters remained unconvinced. "Jimmy the Greek would say: Look at the track record," Kaku said to Mother Jones. "The track record is one out of 20 booster rockets blow up on launch ... Ten percent of our space probes actually come down." Indeed, out of the 23 missions NASA has attempted with nuclear payloads, three failed. However, the RTGs in each instance survived the mishaps intact. Overall, NASA figured there was only a 1 in 1,400 chance at launch that the plutonium might be released, 1 in 476 during its trip into space and less than 1 in a million when the orbiter swung back past Earth in 1999 during its slingshot maneuver.

Richard Spehalski, program manager for Cassini at Jet Propulsion Laboratory, was not impressed by the reasoning of Kaku and the protesters. "They're taking our statements and our documentation out of context and citing consequences that aren't even possible," he responded in MoJo.

Even if the worst did happen: the orbiter failed its flyby and spread nuclear material over an estimated 5 billion people as it re-entered the atmosphere, NASA argued that the dosage of such an event would be about a millirem per year. For comparison, the average American sucks up about 620 millirems annually, roughly half of which comes from cosmic background radiation.

So despite Kaku's continued complaints to MoJo -- "This is a science experiment, and we are the guinea pigs," he said -- both the District Court in Hawaii and the 9th Circuit Court of Appeals struck down the Green Party's lawsuit. Thus the launch was allowed to move forward. On October 15th, the Titan IV rocket successfully lifted off and launched its cargo on a seven-year journey towards perhaps the most recognizable planet in our solar system.

And it's a damn good thing the courts agreed with NASA, given how many astronomical wonders Cassini has helped discover over the past decade. In 2005, it found geysers blasting liquid water from subsurface oceans (and theoretically, whatever was living there) into space. The orbiter mapped the liquid methane rivers of Titan; discovered massive hurricane-like storms at both of Saturn's poles; imaged the vertical structure of the planet's rings for the first time; and delivered the Huygens probe, the only human-made machine to land on a moon in the outer solar system to date. That's to say nothing of the trickle-down nature of space engineering and design that will see tech from this mission be adapted, improved and reused in future missions. What was Bolden even thinking?

All products recommended by Engadget are selected by our editorial team, independent of our parent company. Some of our stories include affiliate links. If you buy something through one of these links, we may earn an affiliate commission. All prices are correct at the time of publishing.
View All Comments
A lawsuit almost stalled NASA's Cassini mission