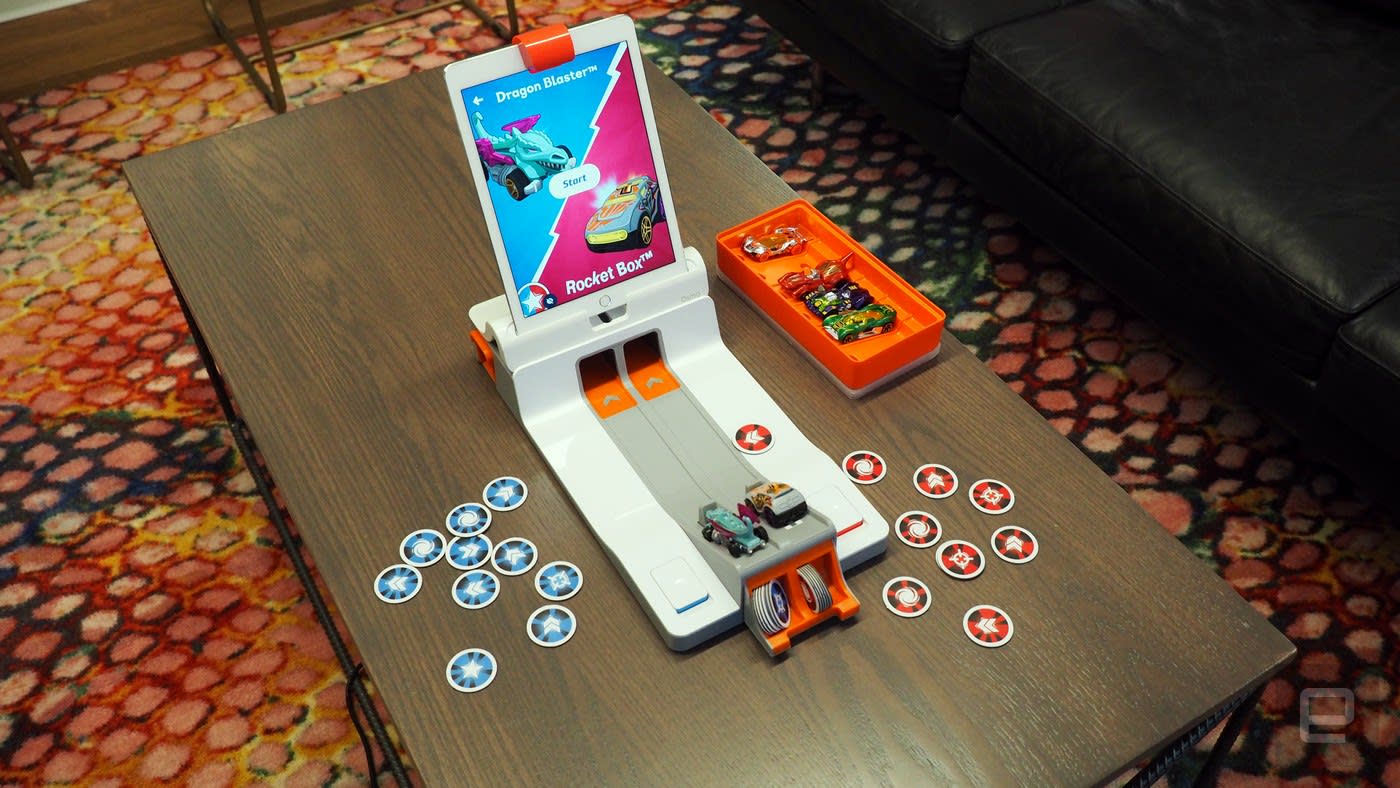 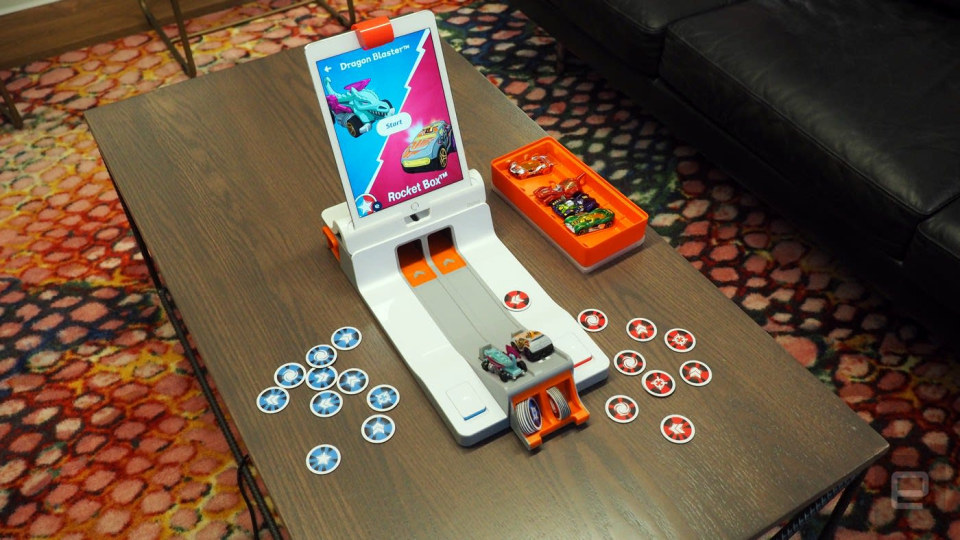 Hot Wheels will be celebrating its 50th anniversary soon, and even in an era when kids spend a lot of time on smartphones and tablets, they also still play with little die-cast metal vehicles on plastic orange track. But the venerable toy car brand can also be found on handheld devices, making its entry into AR earlier this year with Track Builder, which allowed users to build their own Hot Wheels setup in simulated space by moving their phone around. Last holiday season the company also brought video game mechanics into the real world with Hot Wheels AI, which put computer-controlled cars onto a real track with virtual pitfalls. With Mindracers, their newest product, Hot Wheels and Osmo have flipped that dynamic around. Now those metal cars can be dropped into virtual worlds, the kind of places kids used to only see in their imagination. Osmo is best known for its line of learning toys that combine physical play and an iPad: A mirror is clipped at the top of a vertically propped iPad running the app, allowing it to see blocks and other toy shapes that are placed on the table below. The Osmo system's been used to teach words, shapes and even music, but Mindracers represents the company's first product built for play more than education.

The idea is that the camera will recognize the cars placed in front of the camera and then put those exact vehicles onto virtual tracks representing popular flights of fantasy like under the sea and in space. But rather than ask kids to simply push around a toy car in front of their iPad, Mindracers also borrows another staple from the Hot Wheels legacy: a plastic track. 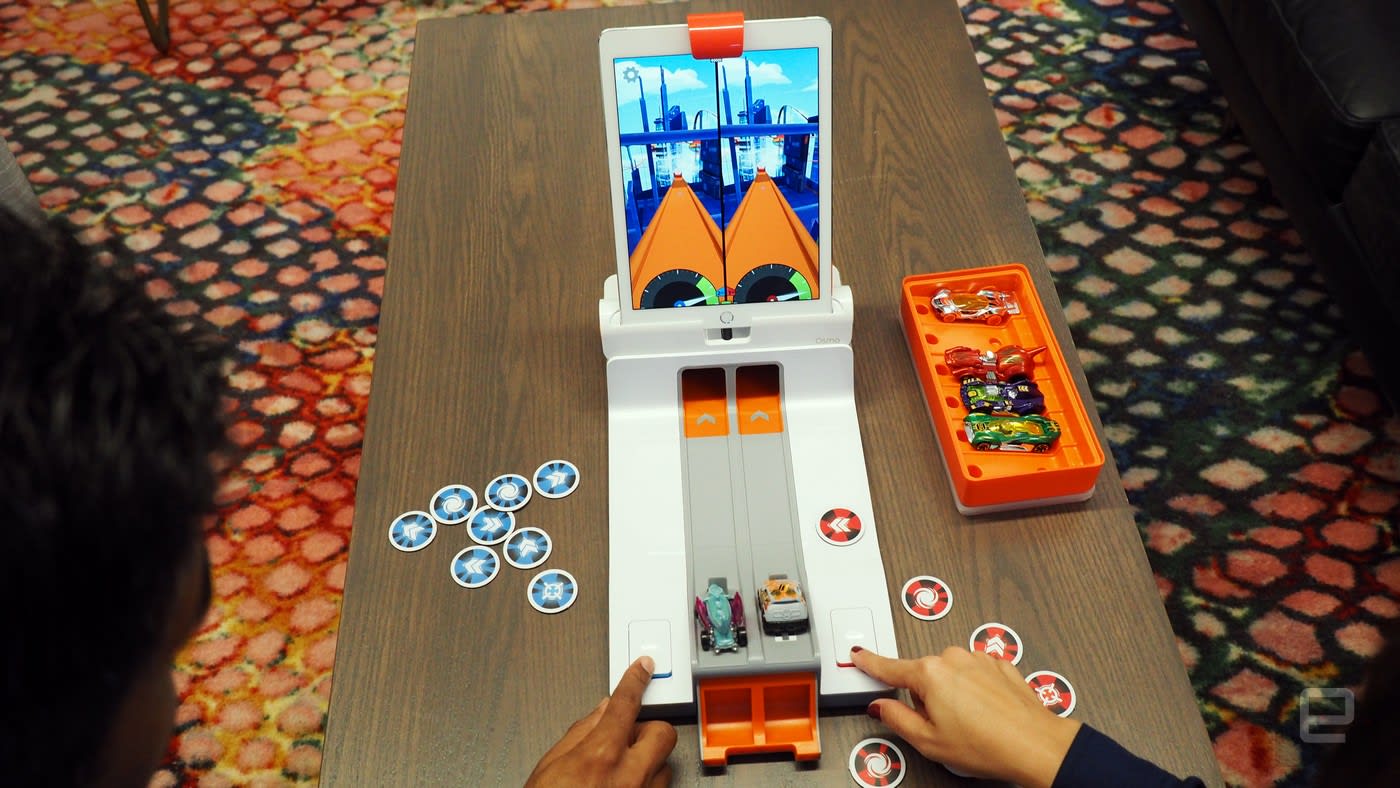 In the real world, Mindracers games will take place on a plastic base included with every set, which holds the iPad at one end and has two tracks for cars on the other. When the buttons on each side are pushed, the cars are released onto the track, with the iPad camera scanning them as they zip by underneath into the tunnel. It's a little elaborate and even unnecessary, but it does add a bit of playful grandeur to the start of each race. Additionally, if the players release their cars at the right time, they see a boost in the virtual race itself. 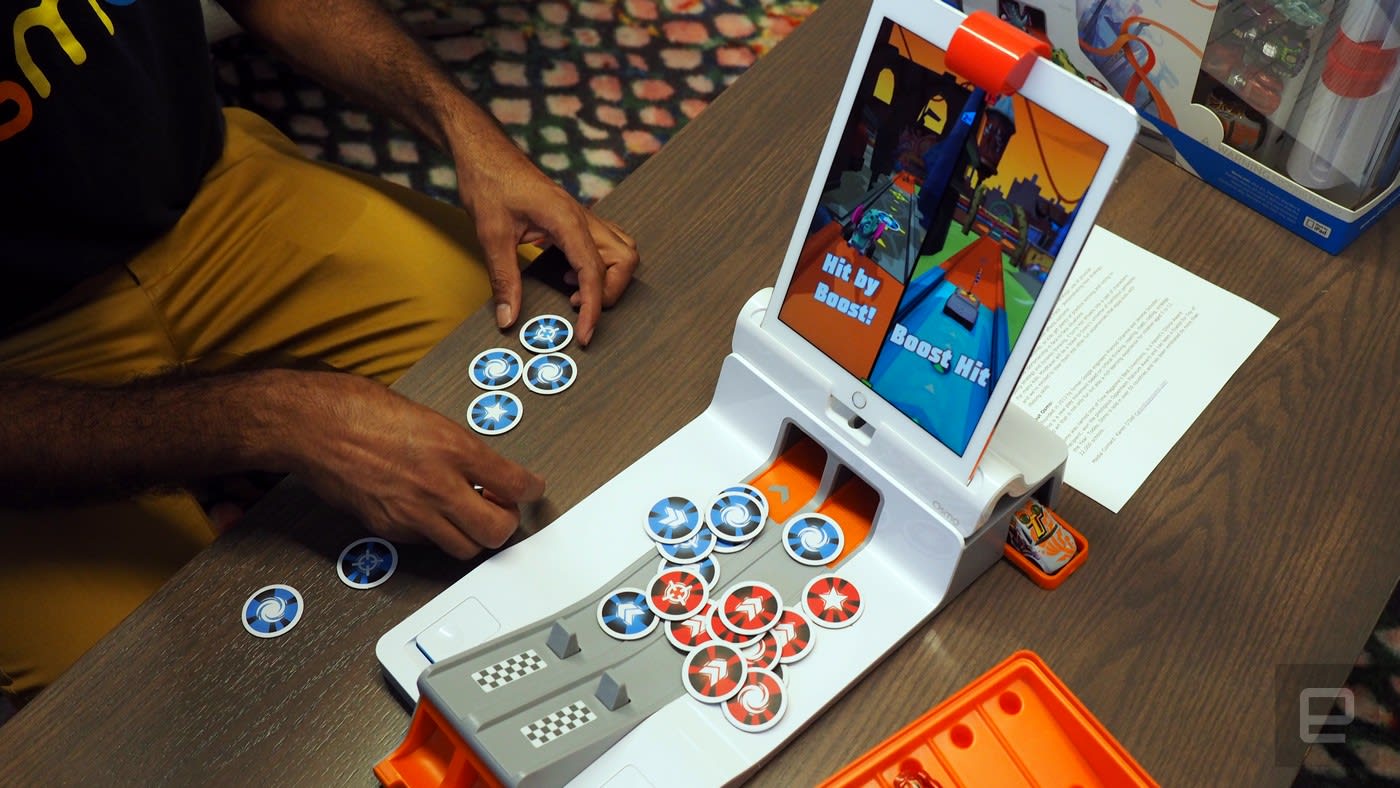 The velocity each vehicle reaches depends on a series of tokens each player gets. These red or blue discs are thrown onto the track throughout the race, with the ability to speed up your car or hinder the opponent. There's a bit of strategy in figuring out what to throw down and when. Each disc has a unique pattern on it so they can only be used once per race; kids can't keep picking them back up to reuse them, forcing them to be choosy with how they play. But it's still possible to mess with the system in other ways, like blocking your opponents' tokens with your own or even obscuring the camera entirely. For Osmo CEO Pramod Sharma, this is all fine, because the company wants to encourage experimentation and creative thinking.

Mindracers has the typical two-player head-to-head mode, but there are also co-op challenges in the game, as Osmo found that kids actually preferred working together toward a common goal.

The basic Mindracers set will include the plastic track base and a set of five cars. The larger kit includes a detachable base for the iPad that makes it possible to use the set with other Osmo games like Masterpiece and Newton, included as part of the package. Almost everything snaps together so the set can be stored as one piece; there's even a compartment for the tokens. The one thing that can't be tucked away in the track base are the cars themselves, which come with their own carrying case. 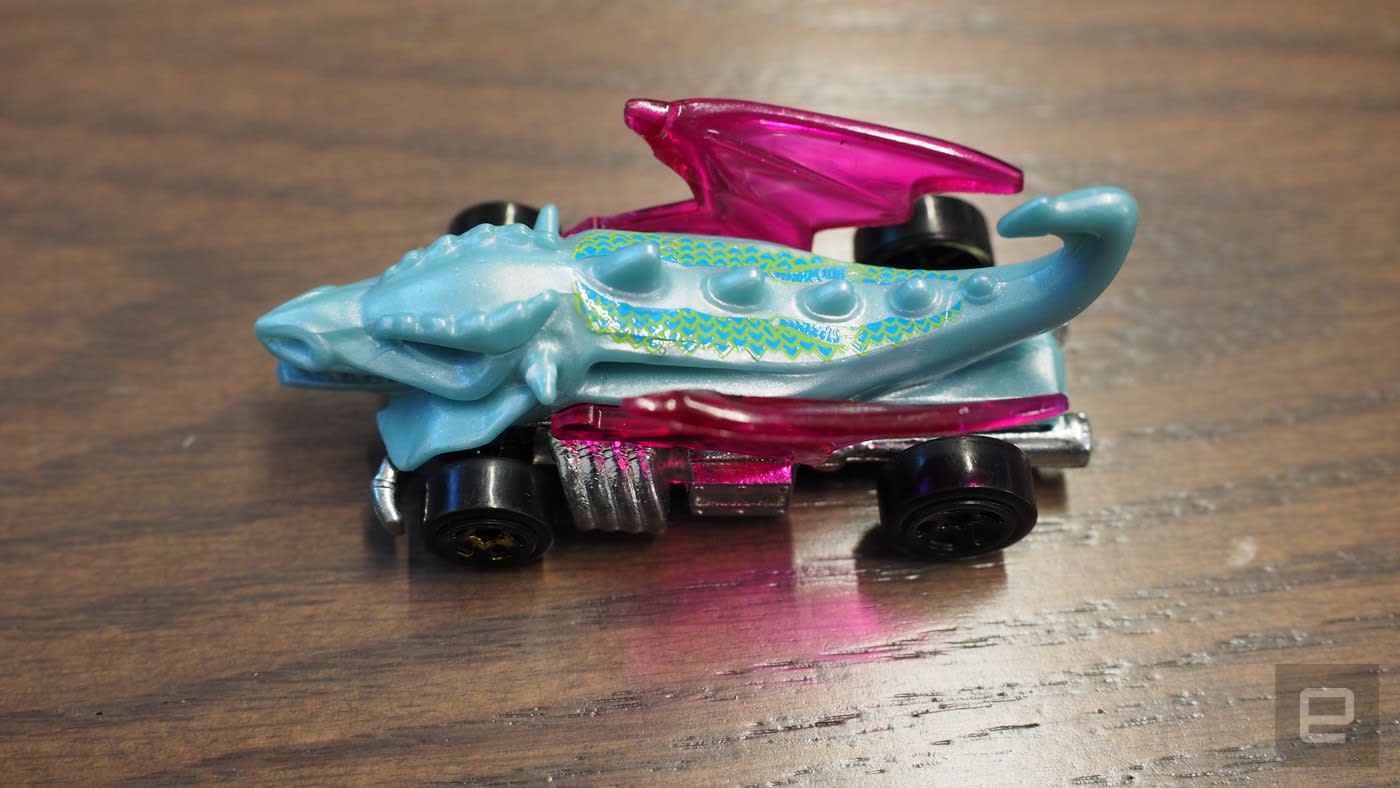 The full kit includes five cars, a varied mix of shapes and sizes. But you won't find familiar car makes like Ferrari or Lamborghini, due to licensing costs. The toys included with the set instead draw from Hot Wheels' inventory of original designs, with the specific selection chosen after polling both boys and girls over which ones they preferred. So there's a sleek silver-and-orange one, a flame-decaled red number shaped like a cat and even an ice-blue dragon vehicle with pink wings. Mindracers is designed to work specifically with these cars, and they'll appear as animated avatars in the game. However, any car can be used; it just won't get a specialized avatar. There are plans to expand the number of vehicles represented on-screen, including the possibility of adding more licensed brands.

The Mindracers game is available starting today, in two configurations: The basic game with the base track and cars will run you $59 while a larger kit including the Osmo base and games goes for $79. That's a bit pricey compared to an old-fashioned plastic-track layout, which tends to start around $20 for a small set. But it also takes up a lot less space in your home and lets two kids play at the same time -- two things adults with messy children prone to squabbles will appreciate. In fact, parents might want to join in too, reliving their own childhood Hot Wheels experiences while experiencing something brand new with their kids.

In this article: av, car, cars, gadgetry, gadgets, gaming, HotWheels, Mattel, Mindracers, mobile, Osmo, PramodSharma, toy, toys
All products recommended by Engadget are selected by our editorial team, independent of our parent company. Some of our stories include affiliate links. If you buy something through one of these links, we may earn an affiliate commission.