Flying is Jacqui Kenny's worst fear. Two months ago, the London-based New Zealander learned she would have to travel to New York for the first exhibition of her photography. She hadn't traveled to the city in a decade, and the mental preparation began immediately.

She visualized every step of the journey: Boarding at the gate, hearing the plane engine rumble, watching passengers stuff luggage into overhead lockers, the taxi, the takeoff. "If I don't visualize the next step, it feels too surreal," she said. "I feel like it's not really happening, and that is anxiety inducing."

Kenny has agoraphobia, an anxiety disorder that, for her, means an irrational fear of busy, public areas and distance from safe spaces. A condition affecting 1.8 million Americans, it leads Kenny to fear losing control, which can spiral into imagining worst-case scenarios. "On a really bad day, even walking to the back aisles of my local supermarket is really difficult," she said. "I think I'm going to have a full-blown panic attack and fall over and shelves are going to go falling. I might hurt somebody; I'll embarrass myself."

Last year, her condition spurred a project. Kenny's production and marketing company The Rumpus Room closed down, and she started exploring the world on Google Street View as an escape from negative thoughts. Meandering through rural towns in Chile, Mongolia and Senegal, she took screenshots of her virtual travels, accumulating an archive of over 27,000 photos.

She would obsess over finding the right shot, exploring backstreets every day -- "morning till evening, till wee hours of the morning," she said -- and began uploading them to Instagram under the moniker streetview portraits. Kenny admits she wasn't brave enough at first to acknowledge the anxiety at the root of her project, but soon she changed her bio to Agoraphobic Traveller and began talking about her condition. 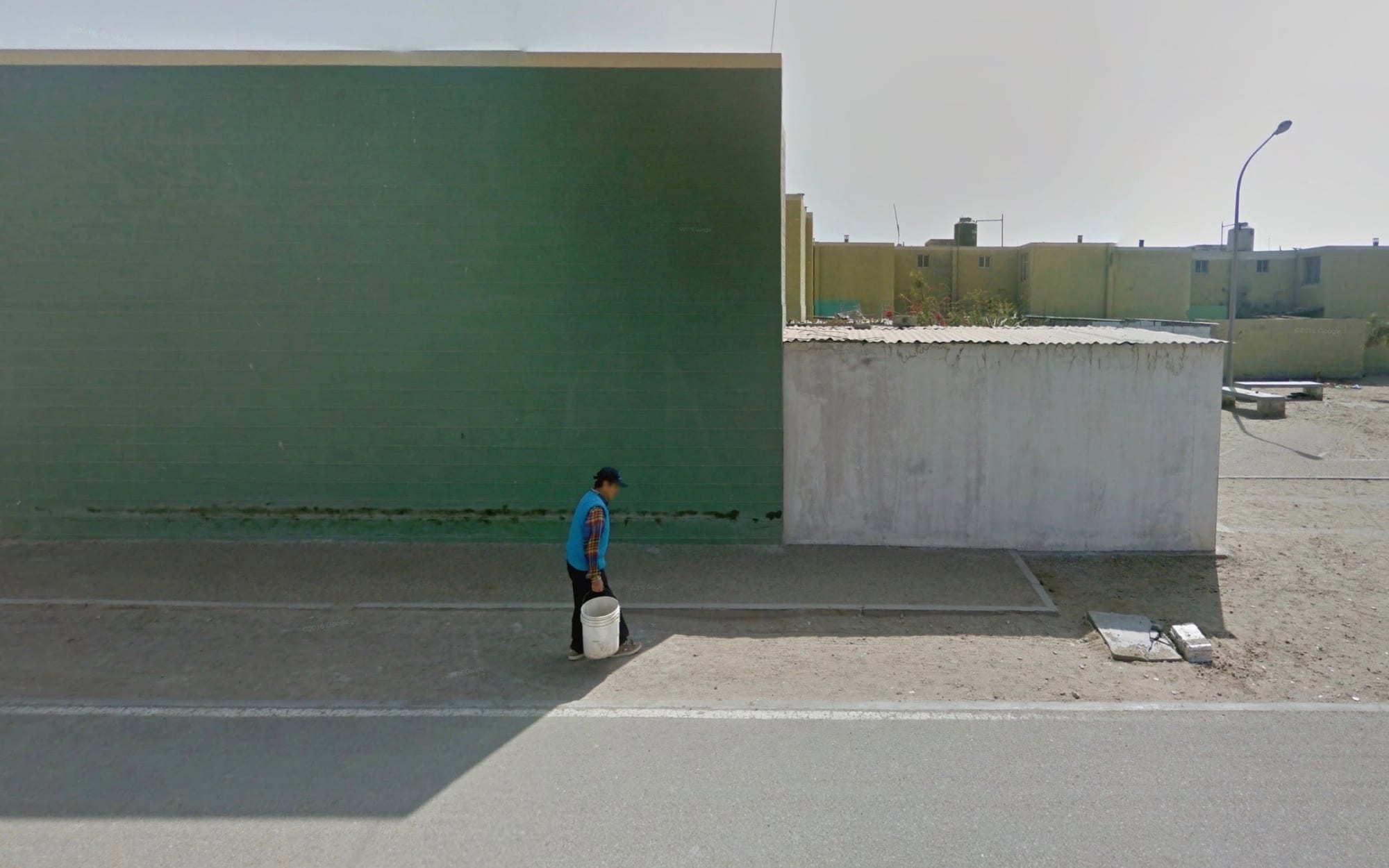 "Agoraphobic travel photographer" sounds like a paradox. Indeed, Kenny refers to herself as a "Street View photographer, not a real world one." Yet a commonplace technology has allowed her to shoot places she thought she might never step foot into because of her condition. She hunts for the perfect shot within the limitations of what Google's cameras have captured. She finds ephemeral moments that disappear without notice when the images are updated.

This can be seen in the links to Google Maps coordinates that she embeds in certain photos. In one instance, kids in Chile chasing the car have now been replaced by a desolate, dusty street. This transparency demystifies her process, allowing people to find and explore the same neighborhoods Kenny has. At her exhibition on Manhattan's Lower East Side, which opened last month, cardboard VR viewers took visitors to some of Kenny's favorite travel sites. In a 360-degree scene, a frame would slowly appear around the point where Kenny cropped out a photo as she explained in an audio track why she chose that sliver. Kenny says she does minimal editing in Photoshop and Instagram, in part because she doesn't want her photos to look dissimilar from the same scenes in Street View.

Without the ability to maneuver a lens and tweak settings for an ideal shot, Kenny scours for specific elements in a shooting location. Usually, she starts by choosing a country that's either close to the equator or very far from it, to get strong lighting with angular shadows. She lands in a major city before darting to smaller towns, where subjects can be more easily isolated. Then she roams street by street for the right moment.

The result is an aesthetic that attracts attention on Instagram. Clean lines form overexposed, minimalist backgrounds. Often, they will frame a vibrant yet desaturated subject that pops out. "I think it's quite controlled, for one, which is very representative of me, but there's definitely isolated loneliness in my shots," she said. Some pictures have a Wes Anderson-style flatness while others are warped by the 360-degree camera, leaving skewed perspectives and shadows. Combined with the blurred faces of humans, her photos can feel ominous or detached even within a bright, spacious locale.

People, in fact, are the most obvious missing element from Kenny's photography, appearing fuzzy or too far away to connect with intimately. In place of the human interaction that an on-the-ground photographer might coax out of subjects, Kenny plays with reactions from kids (and animals) to the Google car. But without close-ups of the a country's inhabitants, some of the arid landscapes start to look the same.

"A lot of people ask me the question, 'Do you feel like you're there when you're going through Street View?' But no, I don't feel like I'm there," Kenny said. "I know that there's a complete disconnect, and I am just looking for that visual something. I'm not trying to really connect with a culture, because how much can you know without talking to people?" 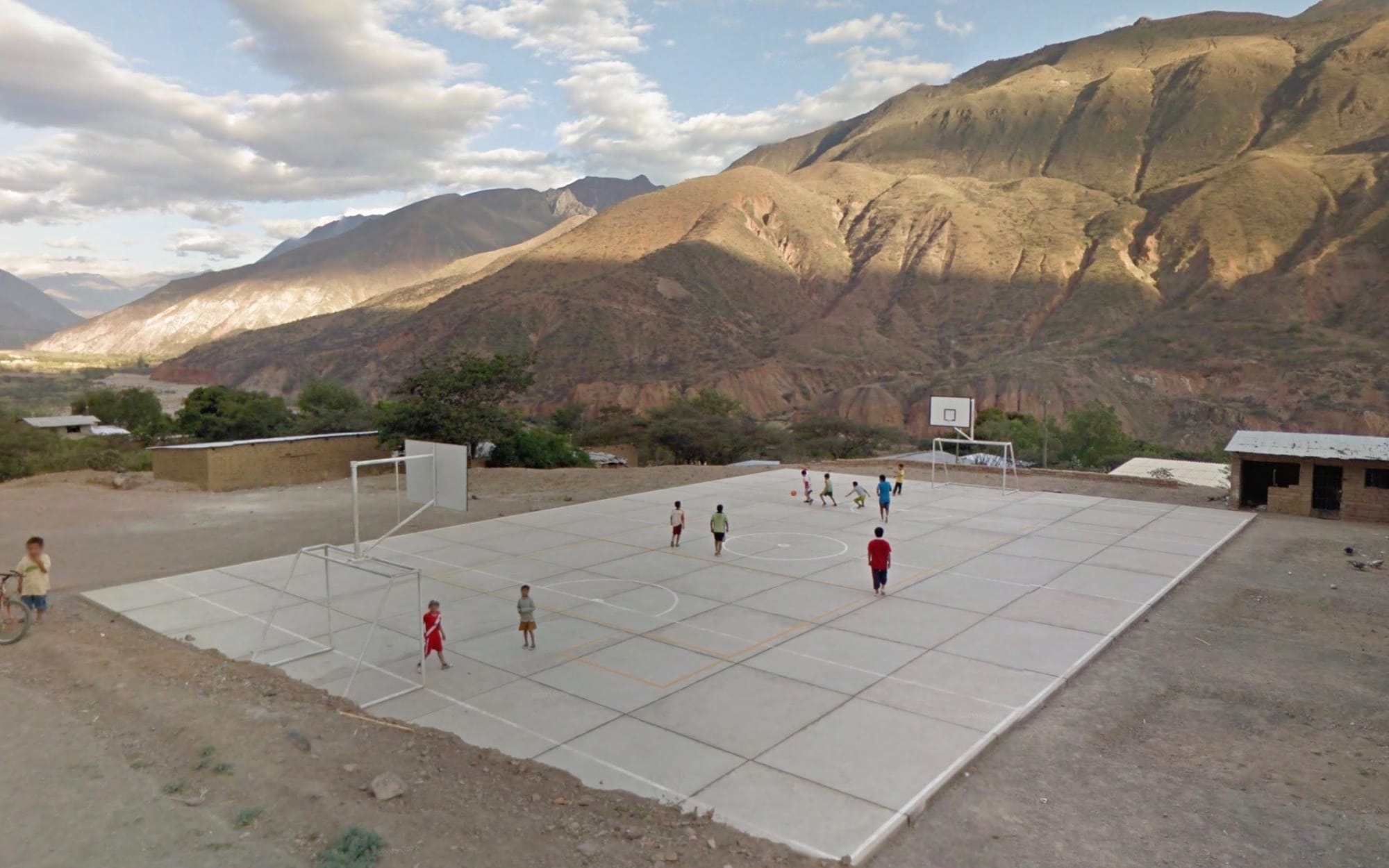 The irony of the Agoraphobic Traveller, however, is the effect that it has had on her condition. Being open about her agoraphobia made Kenny realize how little it mattered to her friends, while channeling her creativity has brought her more focus, she said. Kenny trades messages through Google Translate with followers from Bolivia and Thailand who have agoraphobia too. "I never used to tell people about it, and now that I'm open about it, it's almost like it doesn't worry me so much if I have a panic attack," she said. Her ability to take an eight-hour flight to the New York exhibit launch was testament to that.

Kenny's next target is to actually visit the places she's photographed -- perhaps the Atacama Desert -- to experience the elements of travel missing from Street View. Like her airplane-visualization exercise, the hours spent exploring Chile online have helped her envision what a trip there might be like, and therefore make it less intimidating. "It has made me want to travel more than I ever have before," Kenny said. "I really can't wait to go to these places and just smell these places and feel the heat."