It might just be worth getting a whole new desk.

What's better than dual monitors? An "ultrawide" display that makes games more immersive and multitasking easier than a standard widescreen monitor. But Samsung wasn't satisfied with that. Its massive 49-inch QLED gaming monitor heralds an entirely new style -- let's call it "super ultrawide" -- which can do the work of complex three-monitor setups. While it might look a bit awkward, it could be just what some gamers are looking for.

As you can imagine, Samsung's 49-inch behemoth makes an impression. I use an ultrawide Dell screen on my gaming rig, so I'm familiar with giant displays. Still, this monitor surprised me with the amount of desk space it took up. Its 32:9 ratio is noticeably bigger than 21:9 monitors, which typically feature 34-inch or 27-inch screens. It's base is also larger than most other displays, and the screen's sides jut much farther out — almost comically so. Once I sat down in front of it though, I could easily see the appeal. It offers the most real estate I've seen in a single desktop display.

The monitor's 3,840 by 1,080 resolution is a bit odd. Ultrawide monitors typically feature either 2,560 by 1,080, or 3,440 by 1,440 pixels, for a comparison. It also features a deep curve (1800R), which makes it easy to see all sides of the screen. The display has two HDMI ports and two DisplayPort connections (one of which is a MiniDisplayPort). There's also a USB 3.0 hub on the back with three ports. The on-screen configuration menu is also a step above what we typically see today from other monitors. It's large, easy to read, and clearly lays how to get to various settings. 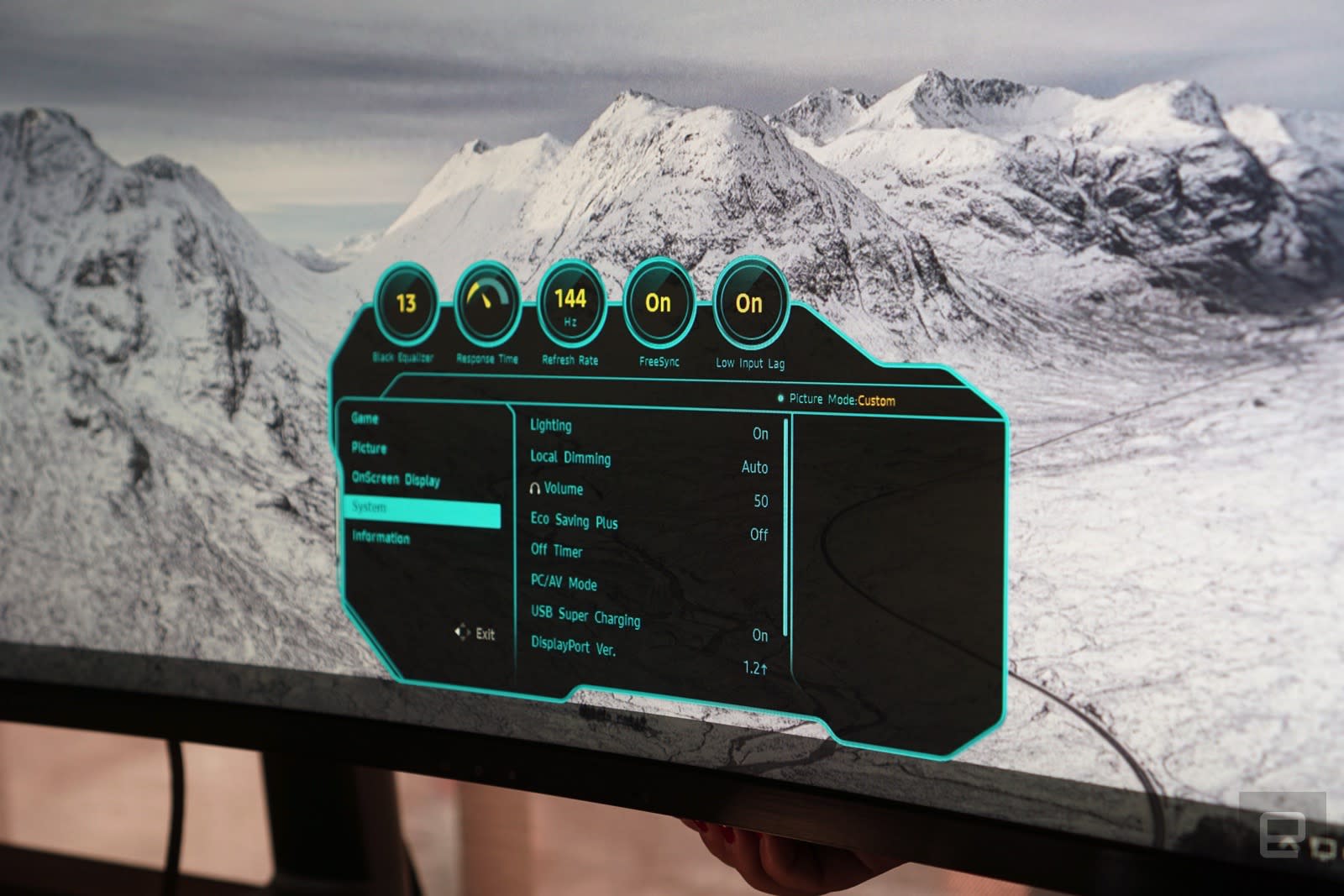 Gamers will definitely appreciate the monitor's fast one-millisecond response time and 144Hz refresh rate. Both of those features will make first-person shooters like Call of Duty and Overwatch more responsive and perform more smoothly. As with most modern screens, it also sports HDR capabilities, as well as support for AMD's Freesync 2 standard. The latter feature smoothes out game performance so there's no screen-tearing. It's also a part of Samsung's new "Quantum Dot" QLED gaming lineup, which means it uses nanoparticles to deliver better lighting and color representation than typical LED screens.

I've tested plenty of gaming monitors over the years, but I was particularly eager to try out Samsung's 49-inch display simply because it's so unusual. And it didn't disappoint. During a brief demo in New York City, I had a chance to play Battlefield 1 and Mass Effect Andromeda, both of which looked fantastic. The display had no problem keeping up as I moused around during firefights; colors looked astoundingly realistic, and the bright HDR elements popped off the screen. There was also plenty of nuance in darker scenes, which was especially useful for Battlefield's harrowing open mission. 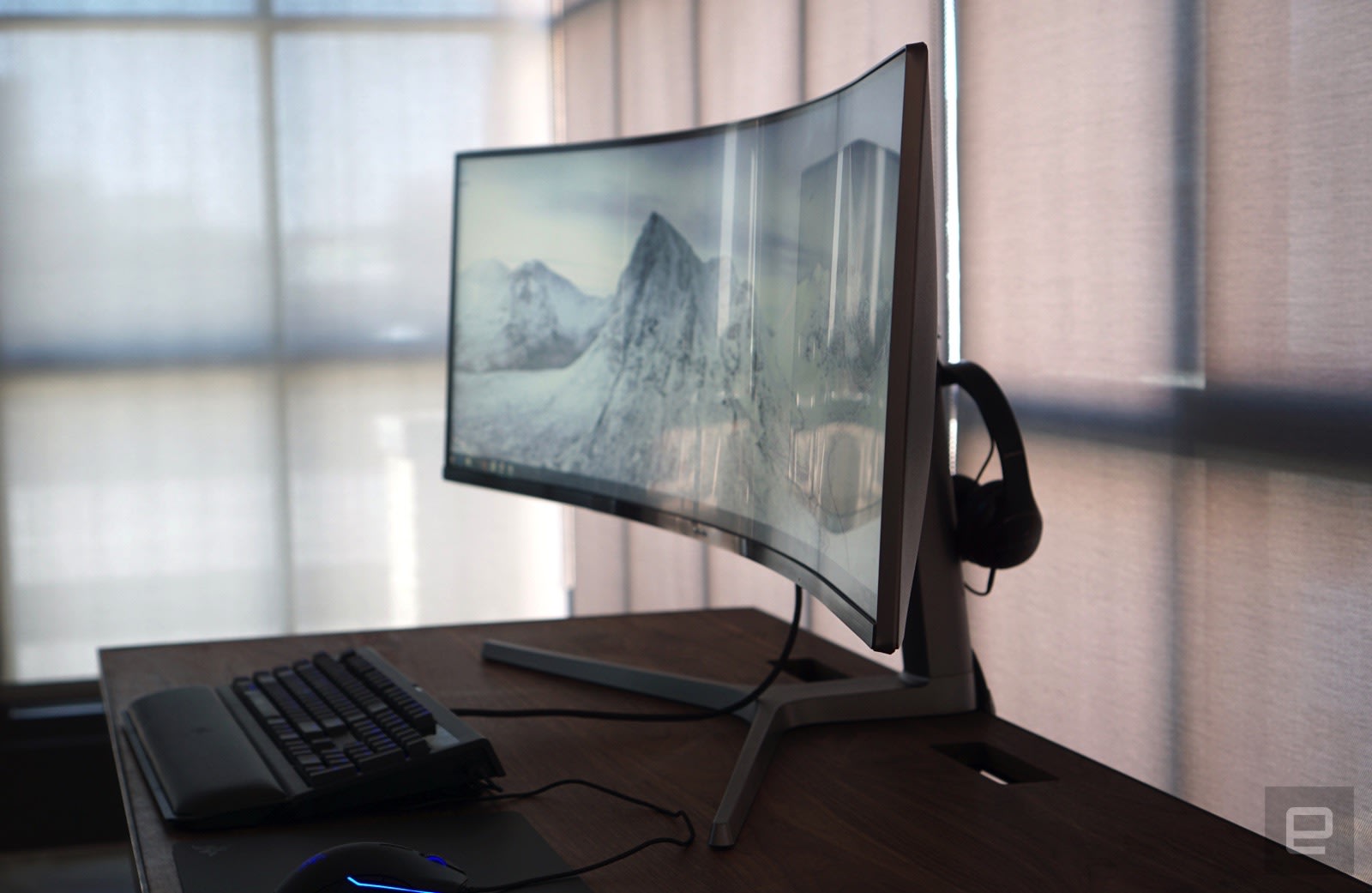 Mostly, I was impressed by how immersive the monitor felt. It effectively replicated the feeling of gaming on a three-monitor setup, except I didn't have to deal with annoying bezels in the middle. It was just pure screen. It's one of the reasons I fell in love with ultrawide displays in the first place -- Samsung's new monitor just takes that sense of immersion to the extreme. Both games also took advantage of the unique resolution, but your mileage may vary on other titles. If you can get a game running on three monitors simultaneously, chances are it'll look good on this screen.

You can do much more than just game on Samsung's new screen. I was able to fit three full-sized windows side-by-side during my demo. It could be very useful for content creators who need to work in timeline focused apps for video and audio editing. I only wish there was a bit more vertical space. While I could comfortably read most websites on the screen, I was a bit disappointed by just how much I had to scroll up and down. Still, that's an issue I could get around by zooming out or tweaking Windows' display scaling settings. You can also have the screen display two inputs side-by-side -- something other ultrawide monitors can do but is more practical with a 49-inch display. 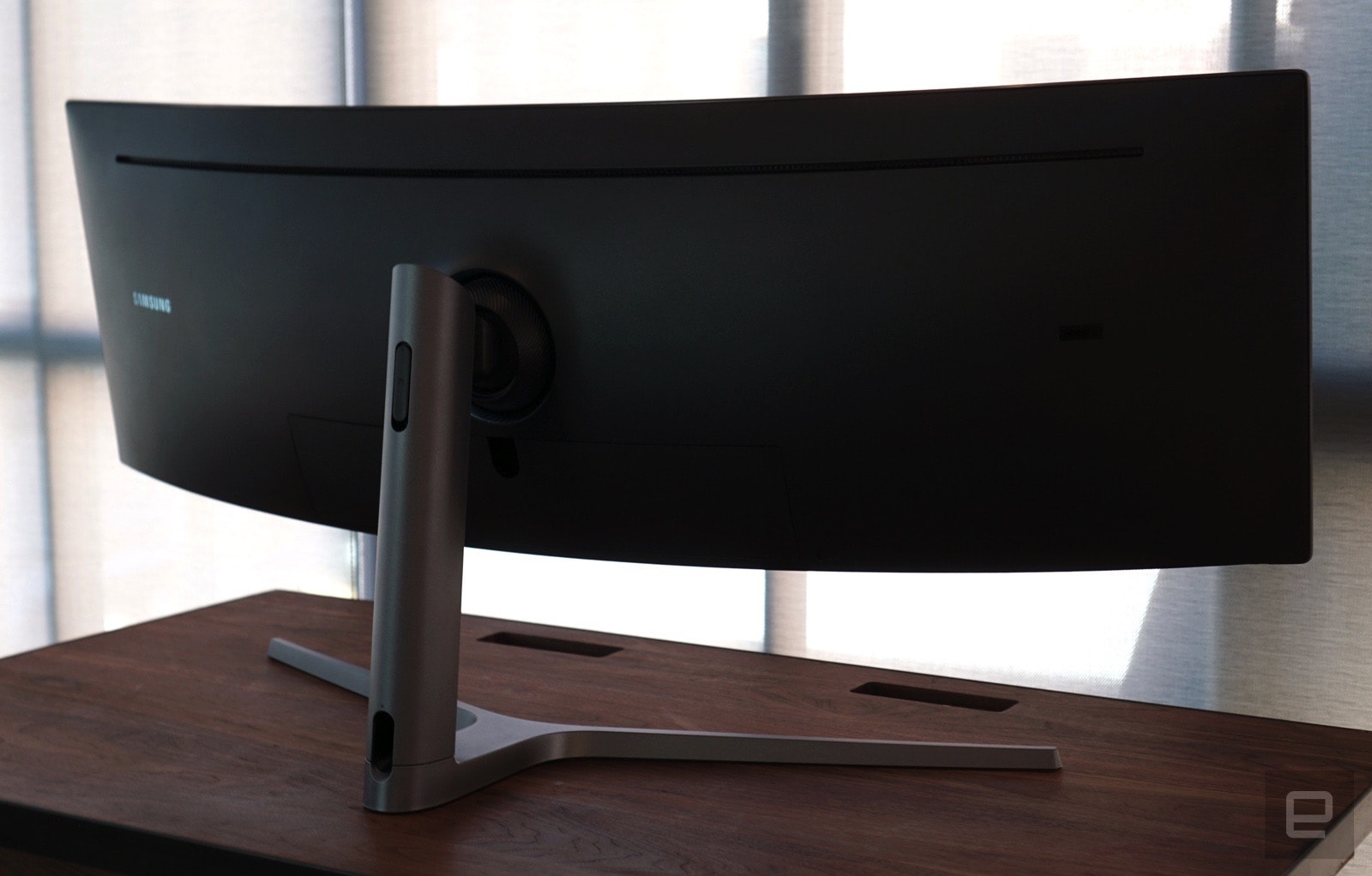 At $1,499, Samsung's 49-inch gaming monitor is surprisingly competitive with ultrawide monitors. Dell's highest-resolution 34-inch Alienware screen is available for the same price, while LG's latest model sells for just $1,000. Yes, these are certainly much pricier than normal-size gaming monitors, but they're not that much more expensive if you're trying to put together a dual or triple-monitor setup.

If you're a gamer looking at ultrawide monitors, it's worth considering this unique Samsung screen. It's unusual, but it also delivers an immersive experience like no other display.

All products recommended by Engadget are selected by our editorial team, independent of our parent company. Some of our stories include affiliate links. If you buy something through one of these links, we may earn an affiliate commission. All prices are correct at the time of publishing.
Samsung’s huge 49-inch gaming monitor is an ultrawide dream
av
gadgetry
gadgets
gaming
gear
QLED
samsung
ultrawidemonitors