America’s cash-free future is just around the corner

We're in the age of plastic now.

Shake Shack's next burger joint at Astor Place in NYC doesn't want your money -- at least not the physical variety. In an effort to reduce the "friction time" between paying for your meal and eating it, the company plans to replace human cashiers for automated kiosks which won't accept actual bills and coins, only cards. This move is part of a global trend away from cash-based economies and towards Star Wars-style credits. But could such a monetary revolution actually benefit all Americans? Don't bet on it. 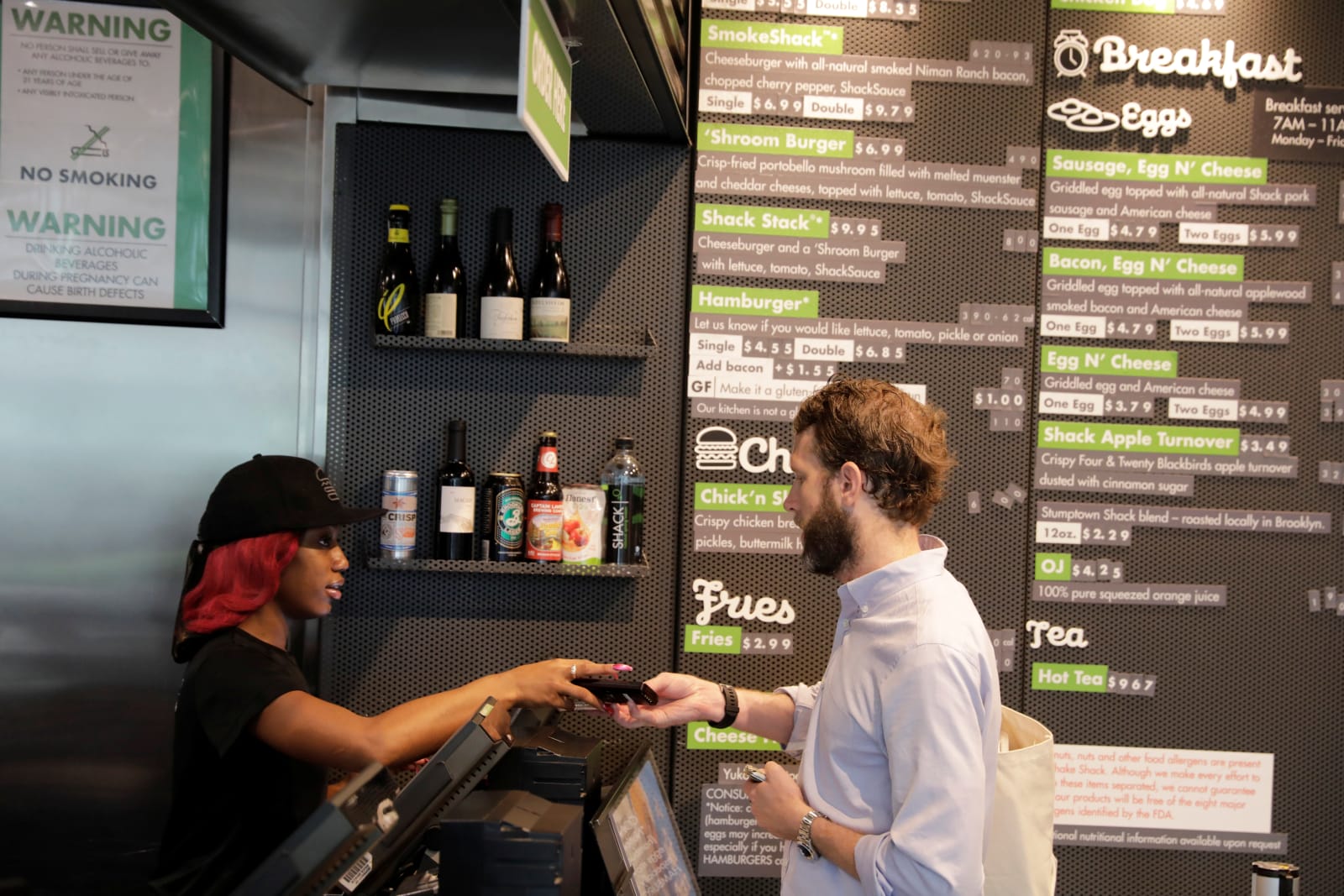 Paying with cash isn't nearly as popular as it used to be here in the States. According to the Federal Reserve's most recent study, consumers used cash for 32 percent of the retail transactions in 2015, that's down eight percent from 2012. Credit and debit cards accounted for 48 percent of the total transactions in 2015. And while the demand for cash remains relatively steady, especially for small, in-person purchases (cash is used for 60 percent of purchases under $10), the rise of online shopping has fundamentally altered how we pay for goods. Online transactions have risen from six percent of the total in 2012 to 10 percent in 2015.

The US government keeps nearly 1.3 trillion dollars of currency in circulation -- $4,000 for every man, woman and child in America -- at a cost of $200 billion annually. A vast majority of those bills (78 percent of them, in fact) are of the $100 denomination. That's more than 30 Benjamins per person while $10, $5 and $1 denominations only account for four percent of the bills we use.

This trend towards digital payments is not exclusive to America -- plenty of other nations are exploring going cashless. In China, for example, more than two-thirds of all online transactions in 2009 were cash-on-delivery. By 2016, digital payments accounted for more than 70 percent of those orders, thanks to the mobile wallet wars between Baidu, Alibaba and Tencent at the beginning of this decade. This is, in part, due to the massive popularity that smartphone shopping enjoys in the country. According to a 2016 report by CNBC, nearly half of all ecommerce transactions completed in China -- worth $505.7 billion in total -- were made on smartphones in 2015. In the US, barely a quarter of all online sales were completed on a mobile device. 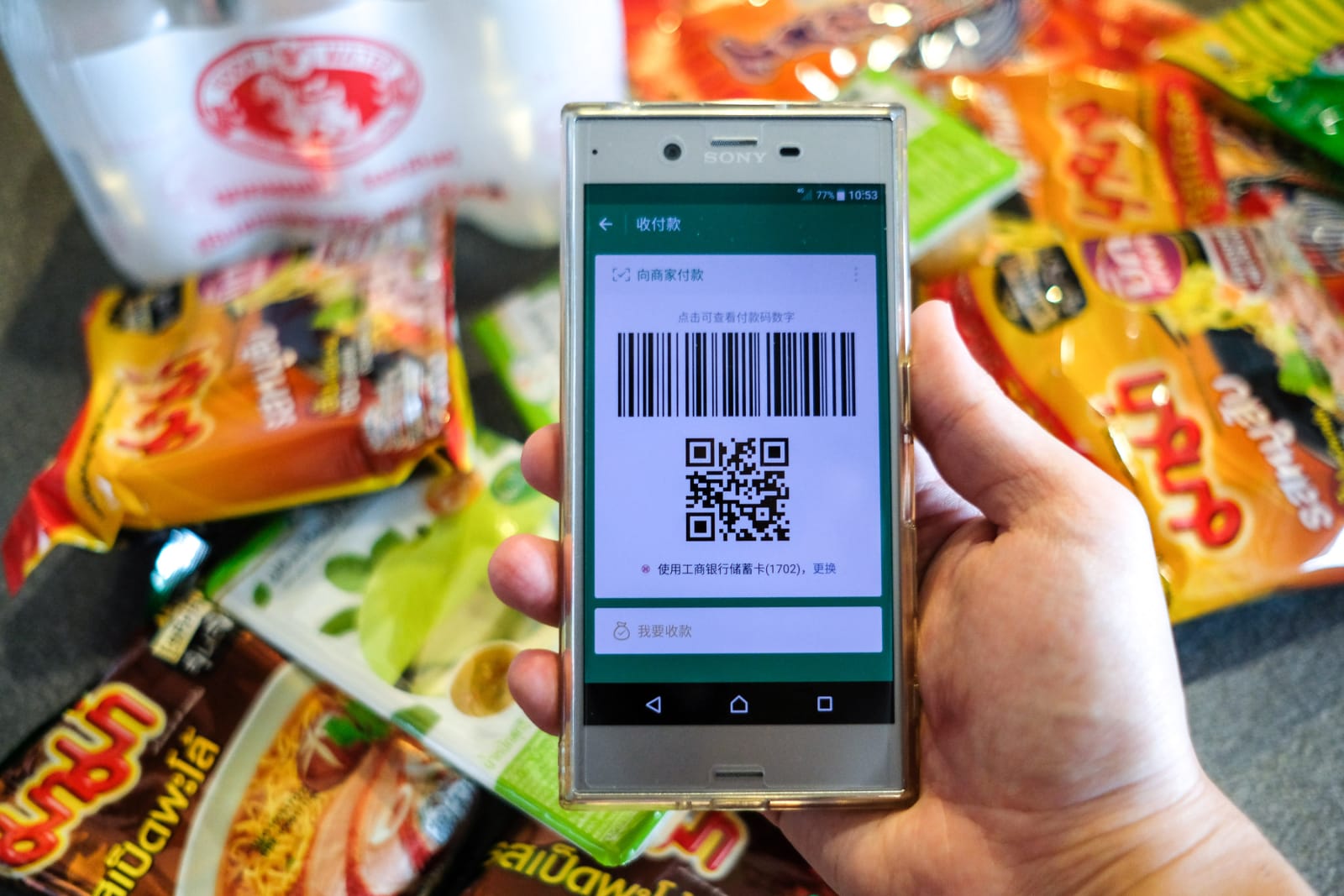 By 2019, China's mobile sales will account for 71 percent of those sales. 2013 Bank of Canada survey found that 44 percent of transactions in that country involved the exchange of hard currency, down 10 percent from just five years prior.

"It's the convenience and the speed," Norman Shaw, an associate professor at Ryerson University's Ted Rogers School of Retail Management, told Global News. "The banks and the payment companies have done a very good job of putting tap-and-pay terminals everywhere, and consequently, it's very easy to go with your credit card and just tap and pay."

Dr. Susan Athey, the Economics of Technology Professor at Stanford Graduate School of Business, echoed these sentiments. "It reduces friction and is more convenient," she said. "As people get more used to carrying just their phone, they'll be more likely to make small purchases with it."

"My kids recently set up a lemonade stand," Athey continued, "and when they accept Venmo and Paypal, they sell a lot more lemonade. Literally, they doubled their receipts from one week to another," by accepting digital transactions. The lesson here: when you make payments faster and easier for your customers, you're going to do more business.

A cashless economy can also benefit both the government and taxpayers. It helps tax collection by making more businesses part of the "official" economy, ensuring everybody pays their fair share. When every transaction has a digital fingerprint, businesses won't be able to underreport their earnings or cook their books with the same ease as with cash. This can lead to an overall reduction in the tax rate since those that are paying their taxes aren't covering for those who don't.

"For the government, the cashless society makes tracking and collection of taxes much easier whilst committing fraud much harder," he wrote. "Whereas cash payments can be made 'invisible', every cashless (digital) transaction has a digital footprint, making it much harder to 'accidentally' misrepresent revenues. For consumers, the benefits of paying with plastic or bytes lie in its ease of use and safety, despite the continuing trade-off between ease of use and anti-fraud and identity theft measures."

The problem, however, lies in the inability of some Americans to participate in such an economy. Digital payments require, at the very least, a bank account, a mobile device and an internet connection. Even in America, not everybody has reliable access to these services. The 2013 US Survey of Consumer Finance found that 7.5 percent of Americans didn't have a bank account. And while mobile phones are nearly ubiquitous, they are not universal.

In fact there are a number of population segments that would be disadvantaged should the government quit circulating cash. The homeless, the elderly and the very young, none of whom might have bank accounts; day laborers and other workers paid under the table; cabbies, waiters, valets and anybody else who rely on tips to supplement their wages. Small businesses, bodegas and other independent retailers would also be squeezed by the high processing fees necessary to pay with cards. 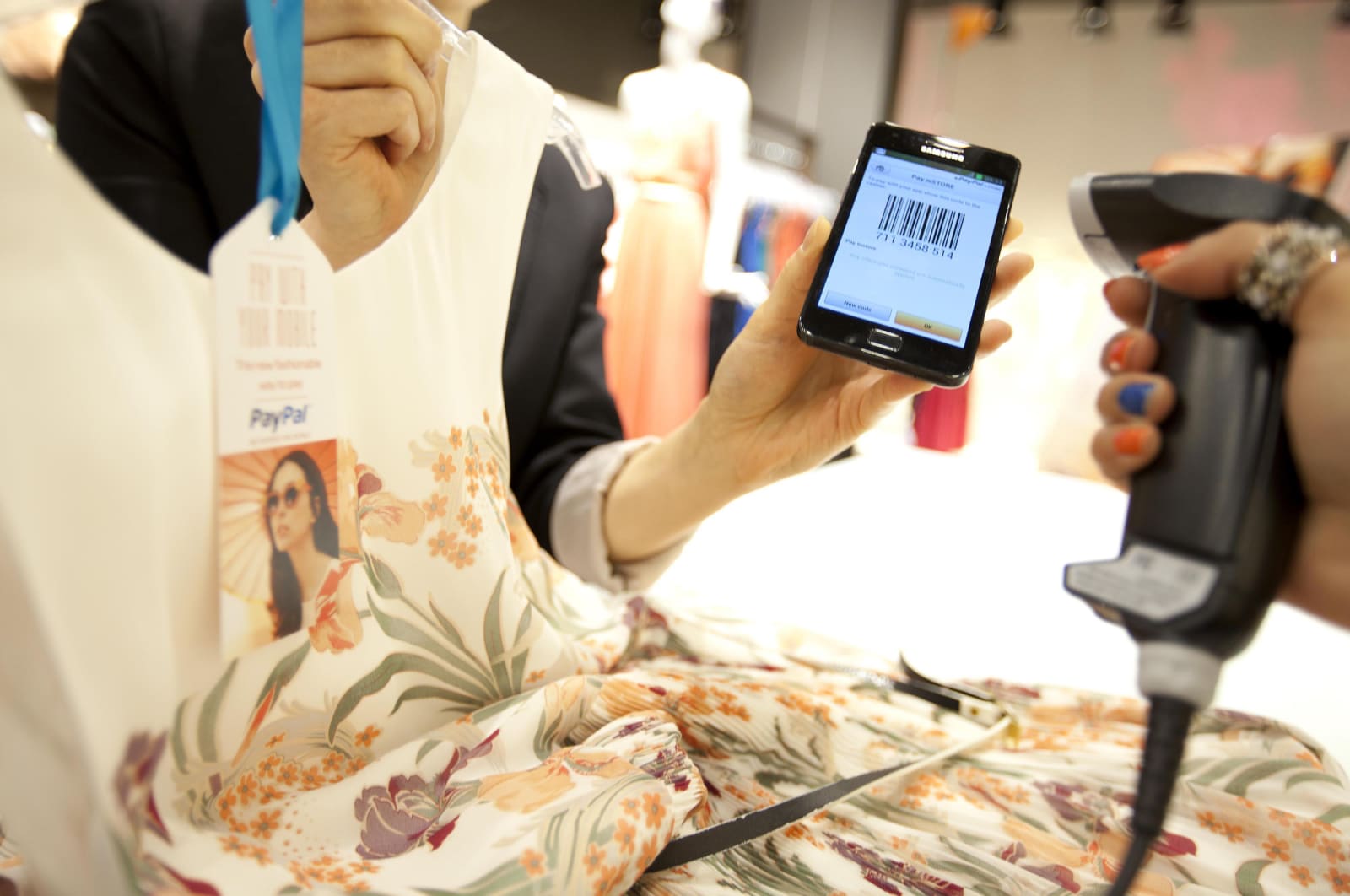 "Cleary you're going to need a way to get everybody into the system if you're going to get rid of cash," Athey explained. "One of the things the government will have to do is ensure banking access to everyone." She expects that a new class of banking institution, offering low cost services like zero-interest checking accounts will emerge as a result. For those who don't have reliable access to a phone, Athey believes that physical debit cards could be used as a stand-in for digital currency, with a biometric verification system preventing thieves from extracting value from stolen ones.

But despite the potentially massive upheaval of modern banking institutions, Athey is confident that we'll see a cashless America within our lifetimes. "Some economies are most of the way there already, other economies are a little further behind," she said. Athey figures that consumers will begin regularly leaving their cash behind when shopping within five years.

"You already don't really need cash anymore right now," she continued. And once the trend reaches a critical mass of consumers demanding digital payment options, businesses will have no choice but to concede. Granted, most retailers already allow you to pay with a debit or credit card but this would make the service effectively mandatory.

So what would a completely cashless America actually look like? Probably not a whole lot different than it does today. Digital wallets and fund transfer apps like Venmo, Google Wallet and Apple Pay will become even more prevalent as people begin to use them for everything from paying friends for rounds of drinks to contributing to the Sunday Services collection plate. The flip side of that, of course, is that physical currency will become increasingly rare -- don't expect to find money lying in the street for much longer. 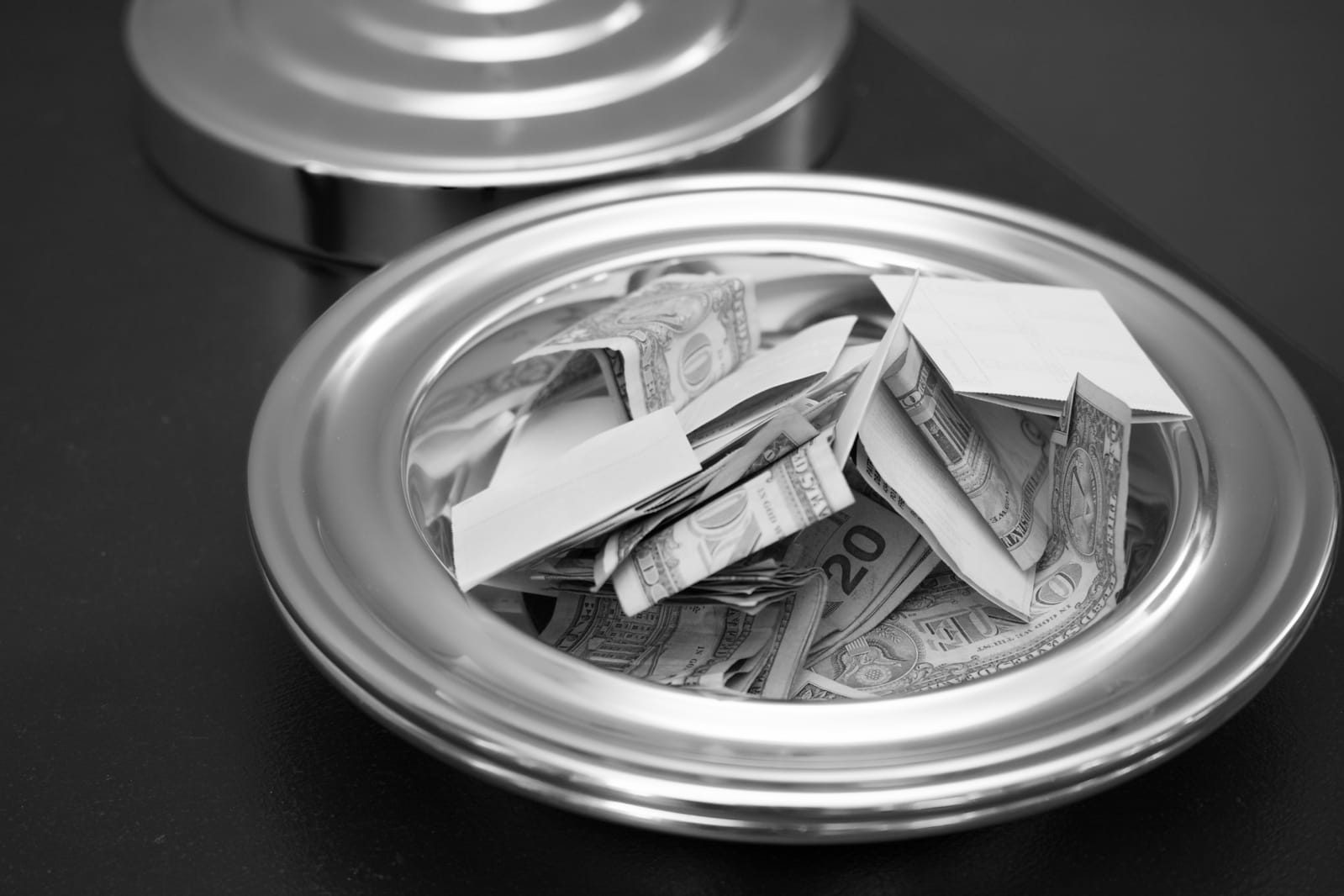 Cryptocurrencies will also play a larger part in daily life, especially for America's immigrant and migrant communities. As Forbes contributor Jacob Tellez argued last December, "It is costly and time consuming for immigrants to send money across borders. A borderless currency such as Bitcoin allows distant families to access funds within mere minutes using only a 2 percent transaction fee instead of the 10-20 percent banks generally charge."

We could see the diminishment of conventional banks as well. The Millennial Disruption Index study, a three year survey of more than 10,000 millennials conducted by Viacom subsidiary Scratch, found that 73 percent of respondents trusted online services like Square and PayPal more than national banks. This is likely due to how those institutions screwed over average Americans during the 2008 financial crisis before receiving massive bailouts from the government. What's more, a full third of people surveyed didn't anticipate needing bank accounts at all within the next five years.

Of course, the mandatory nature of a cashless system does raise privacy concerns. Since every transaction has a digital fingerprint that ties it back to your account, the government would have record of your entire purchase history. Literally, every single thing you've purchased throughout your life. As such, stringent privacy protections would have to be implemented. Athey suggests an opt-out option for small ticket items. "Something where we could choose to not record personal information 'cash-like' transactions are made," she said.

Still, that's a lot of faith being put in the hands of the government to not misuse the data to target or harass its citizens. And if the recent DACA controversy is any indication, the US government hasn't shown much willingness to behave itself when given added powers over its people. So while the march of technology brings us ever closer to a digital-currency economy, don't expect cold hard cash to disappear entirely any time soon.