Finally, a Fire slate with hands-free Alexa and a decent screen.

It's hard to get excited about an Android tablet in 2017. Samsung is still trying to take on the iPad with its premium Galaxy Tab S lineup, and there are countless slates from other companies that seem more obligatory than innovative. Mostly it boils down to one thing: Google hasn't done much to make Android tablet-friendly. That makes Amazon's newest Fire HD 10 tablet all the more special. It features a great 10-inch screen, it's fast enough to run plenty of apps, and, most important, it costs just $150/£150.

From the beginning, Amazon took a different route with its Fire tablets. They use Android at their core, but they feature a custom "Fire OS" that puts all of the shopping giant's services front and center. In a way, they're basically digital Amazon catalogs, allowing you to easily shop and catch up on the latest Prime Video shows. While the company dabbled in the high-end arena with its Fire HDX line, it eventually shifted focus entirely to inexpensive tablets. They're not exciting, but they're ideal for people who want a cheap and easy-to-use slate that can run the occasional Android app.

In that vein, not much has changed with the new Fire HD 10. It has the same overall design as the 2015 model, with a plastic body and large bezels around the 10.1-inch screen. Notably, there's no aluminum case, like there was with last year's entry, but that makes sense, since Amazon was clearly trying to cut costs. At 9.8 millimeters thick, the Fire HD 10 isn't exactly slim, but its rounded edges make it easy to hold. It's only a tad heavier than the 9.7-inch iPad, clocking in at 1.1 pounds. 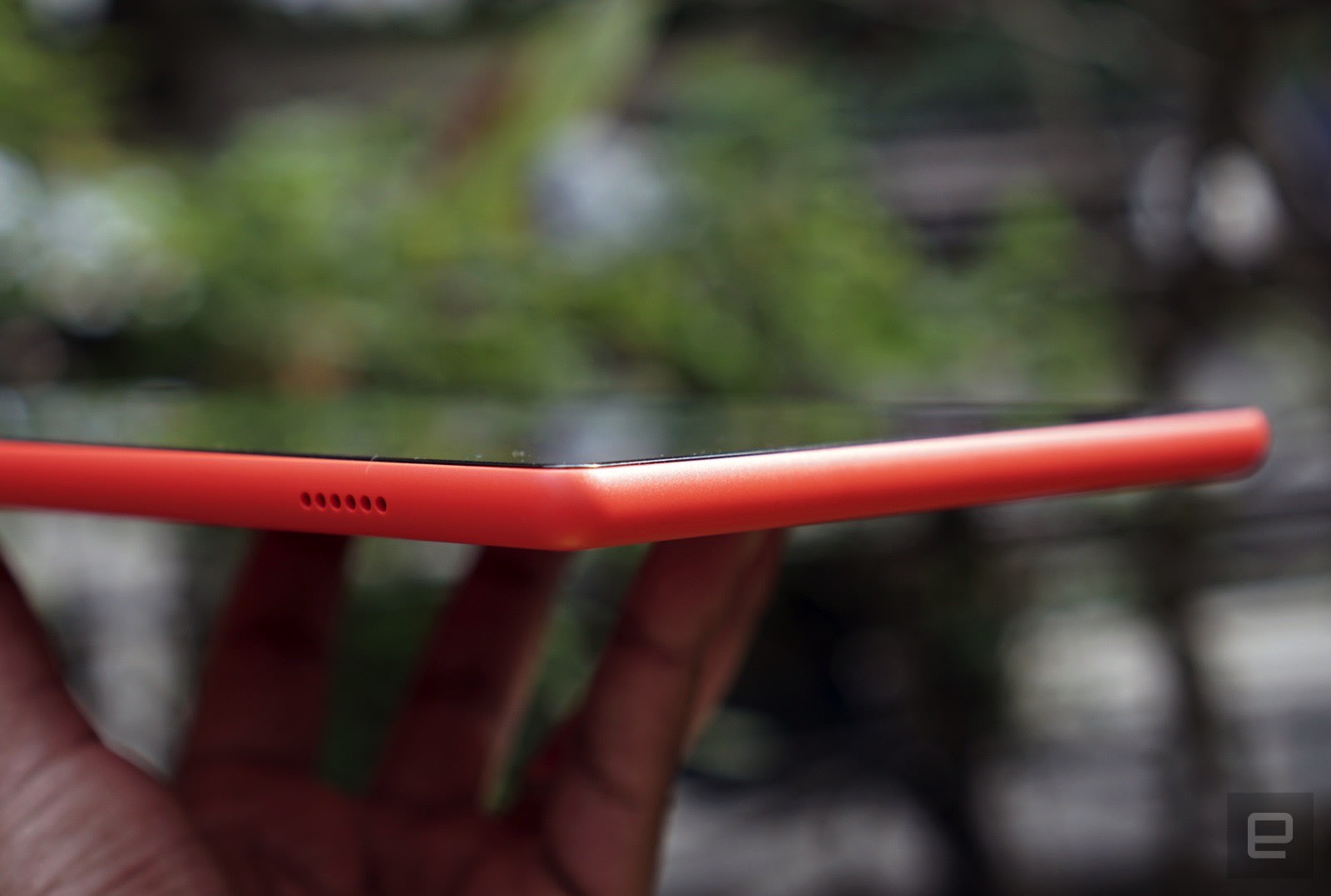 I don't expect much from a $150 tablet, but the Fire HD 10 surprised me -- first, with its sturdiness. The plastic case didn't flex when I tried to bend it, and there weren't any any noticeable creaking noises either. It feels like something that could take a tumble with ease. That makes it particularly well suited to children and the chronically clumsy. It's odd that Amazon didn't make an extra-strong "Kids Edition," even though it did for the smaller Fire 7 and HD 8. Those are more expensive than the standard versions, but they come with protective cases and, most important, a two-year warranty against all sorts of damage.

The most immediate upgrade is the Fire HD 10's 1080p screen (224ppi), which is a solid bump up from the 720p (1,280 x 800–pixel) display of its predecessor. Under the hood, it packs in 2GB of RAM (twice as much as before), as well as a 1.8GHz quad-core processor, which Amazon claims is 30 percent faster than the last model's. The tablet also includes 32GB of storage, and you can add an additional 256GB via the microSD slot. 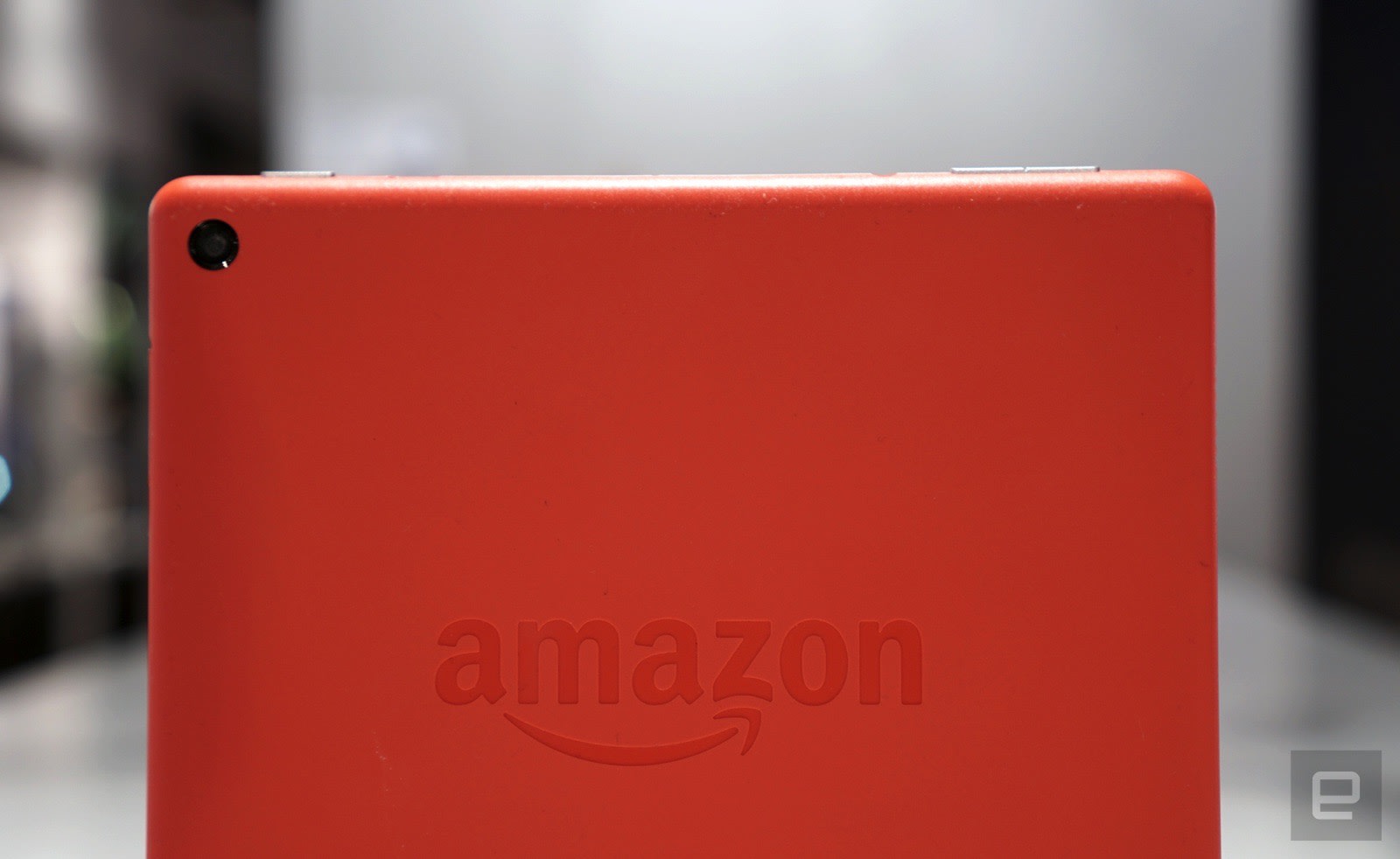 The Fire HD 10 features two stereo speakers, as well as Dolby Atmos for headphones, which helps to make surround-sound audio more immersive. Amazon also included a 2-megapixel camera on the rear, which is a laughably low resolution for a front-facing camera these days, let alone a primary shooter. There's also a front-facing VGA (640 x 480 pixels) camera that feels like a blast from the past. It's been more than a decade since I last saw such a low-res camera on anything. Beyond that, the HD 10's hardware is fairly straightforward. It still charges over micro-USB -- you'll have to wait a bit longer for Amazon to jump on the USB-C bandwagon. 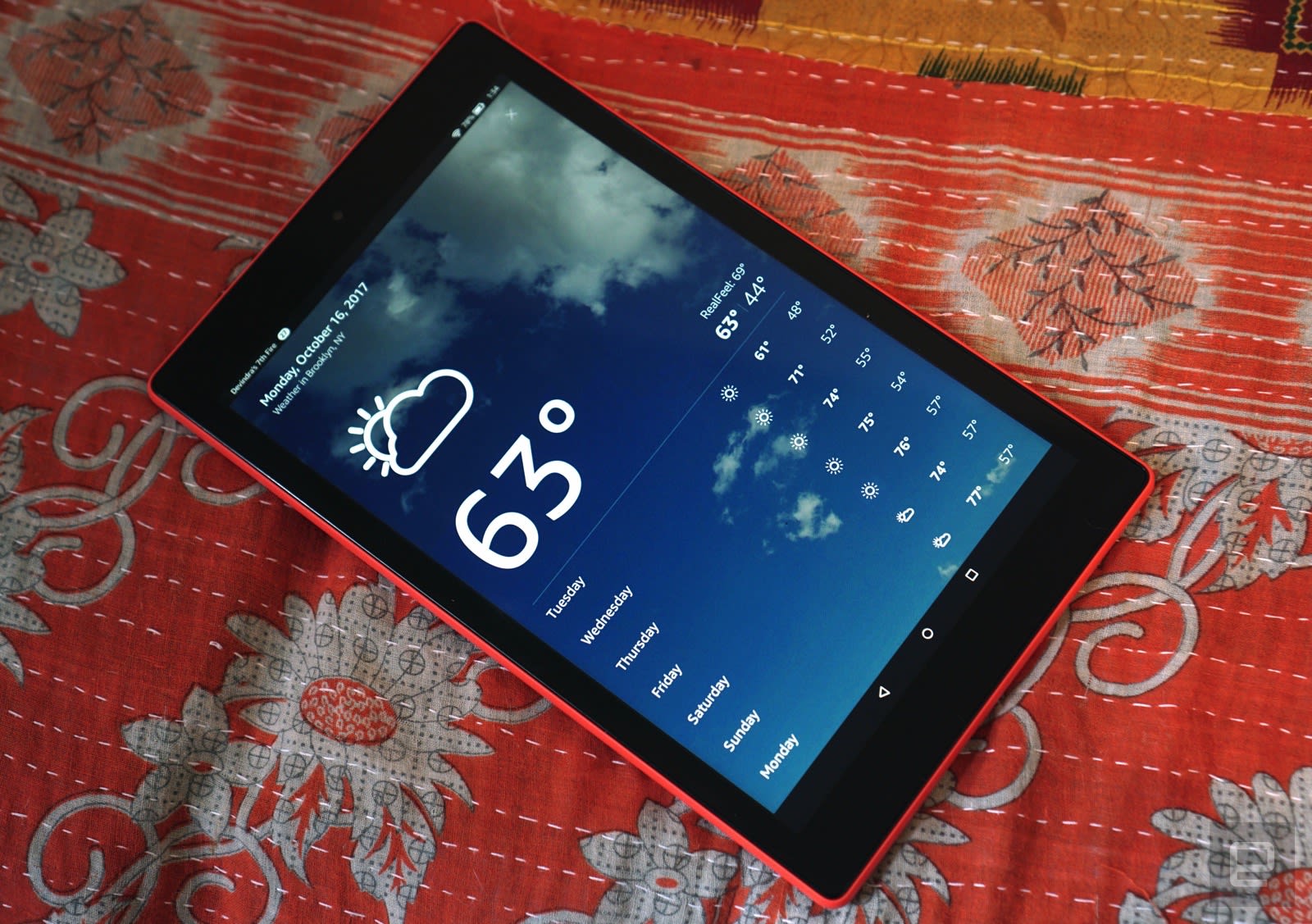 While we've seen Alexa in the Fire HD 8 before, the new Fire HD 10 is Amazon's first tablet to offer completely hands-free communication with its virtual assistant. Instead of pressing a button to issue commands, you can simply say "Alexa" out loud, even when the tablet is asleep. It works much like Amazon's Echo devices, except you also get some on-screen feedback in addition to the assistant's voice responses.

Aside from the addition of hands-free Alexa, Amazon's Fire OS hasn't changed much. It's still broken down into several columns: "For You," which directs you to Kindle and Prime Video content in your library; "Home," where all of your apps live; and sections for books, videos, games, apps, Audible and newsstand content. And, of course, there's also one category dedicated to shopping on Amazon. It's all fairly straightforward, though the huge variety of sections can be intimidating at first. 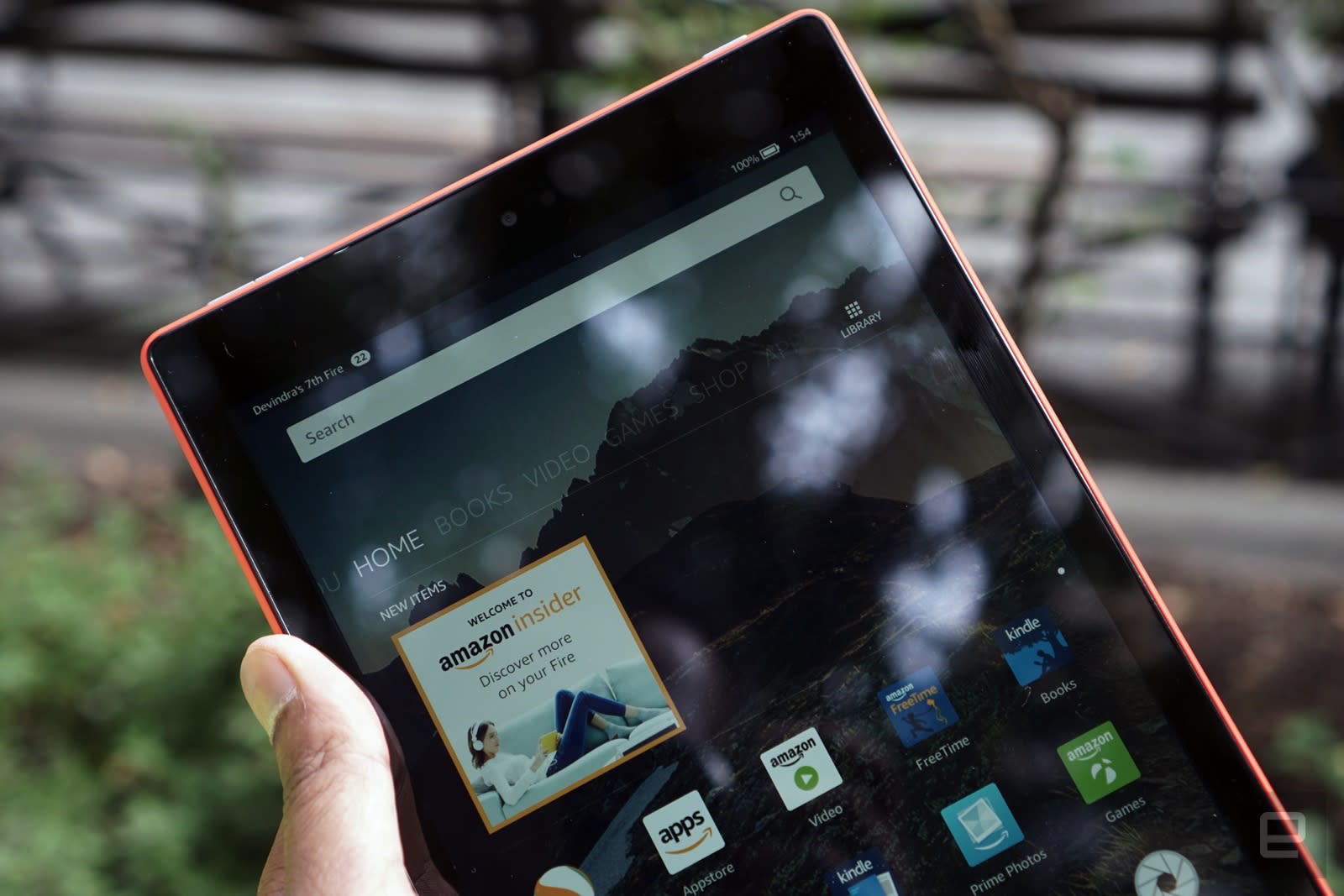 I'll admit, I typically dread testing out Amazon's tablets. They're not bad, especially given their low prices, but they're much slower than the gear I normally use. Not so with the Fire HD 10. It's the first inexpensive Amazon tablet that's fast enough to keep up with my needs. That's mostly because the company has finally moved beyond a paltry 1GB of RAM. But I also appreciated having some extra CPU horsepower under the hood.

It didn't matter whether I was scrolling through Twitter feeds, browsing demanding websites, playing Amazon Prime movies or hopping between apps -- the Fire HD 10 handled it all without slowing down. Surprisingly, the stereo speakers sound great, even at high volumes. The tablet can even run some games decently, though it would stutter with anything graphically demanding. While the tablet has received a huge performance boost, its GPU is still underwhelming.

Really, though, the biggest improvement you'll notice in the Fire HD 10 is its 1080p screen. That might not sound very exciting these days, but it's a significant leap for Amazon. The higher resolution makes videos and photos much clearer than before, and the improved brightness makes everything pop. It's also sharp enough to display text clearly, which is ideal for Kindle books. Sure, the screen doesn't hold a candle to the insanely bright OLED displays Samsung is using in the Galaxy Tab S2 and S3, but they're also far more expensive. 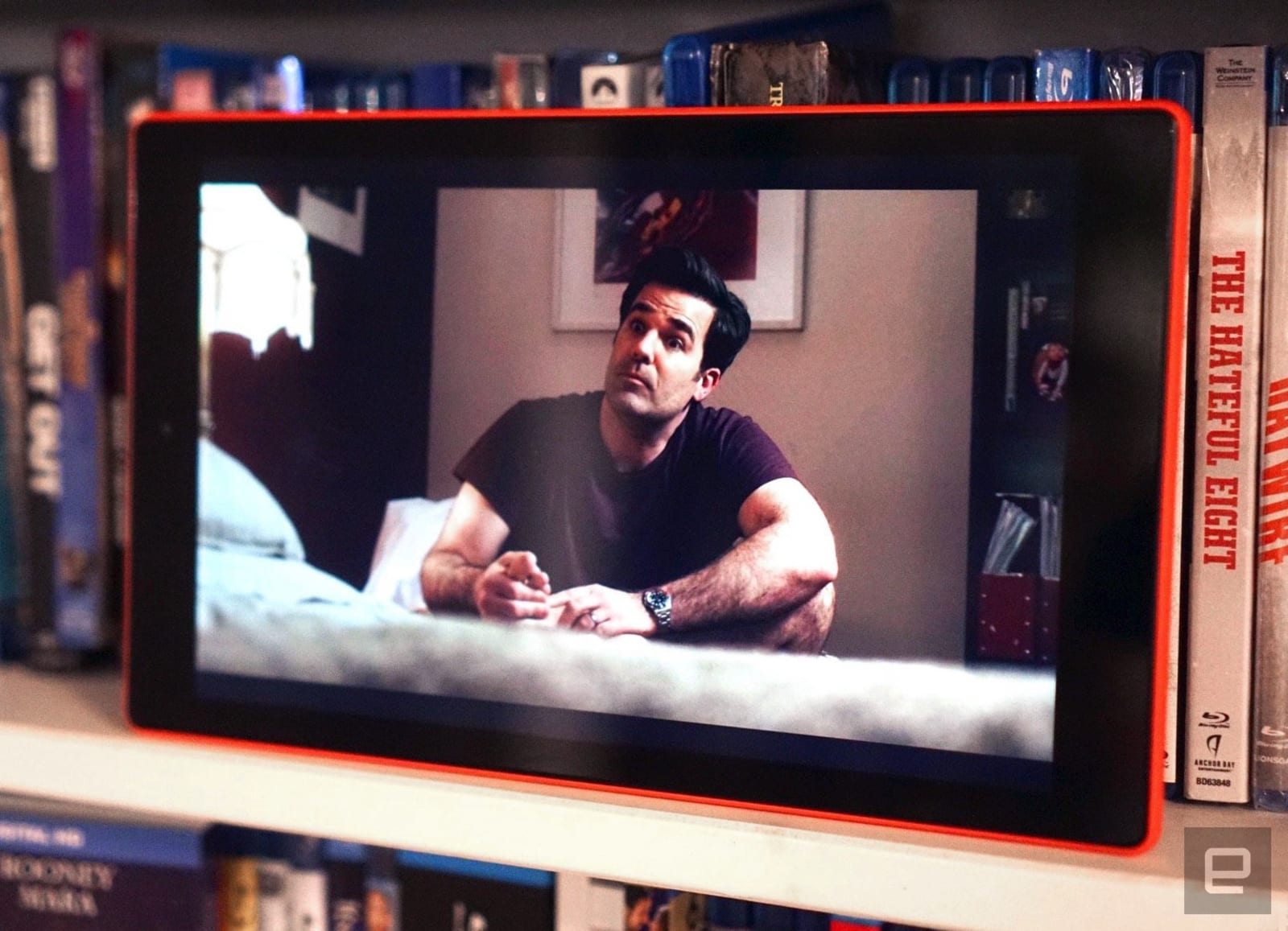 If you haven't been bitten by the Amazon Echo bug yet, the Fire HD 10's Alexa integration will give you a taste of what you've been missing. You can ask the virtual assistant to do things like tell you the weather, set timers and relay the latest news. But it also takes advantage of the tablet's screen to display cards with more information. For example, when you ask about the weather, you also get a preview of what's to come over the next few days. Alexa can also start playing a video or song on Prime services at your request -- unfortunately, that doesn't work for other platforms like Netflix. The tablet has only one microphone, but it managed to hear my voice requests most of the time, even in noisy environments.

Compared with other Android tablets, Amazon's interface feels far more refined, despite being a bit cluttered. You're never more than a few swipes away from a new TV show to binge, a book to read or a pair of Cole Haan boots. It's a consumption machine, for better or worse. The Fire HD 10 lasted nine hours and 45 minutes while playing a downloaded HD video on loop. That's pretty close to Amazon's 10-hour battery life claim. 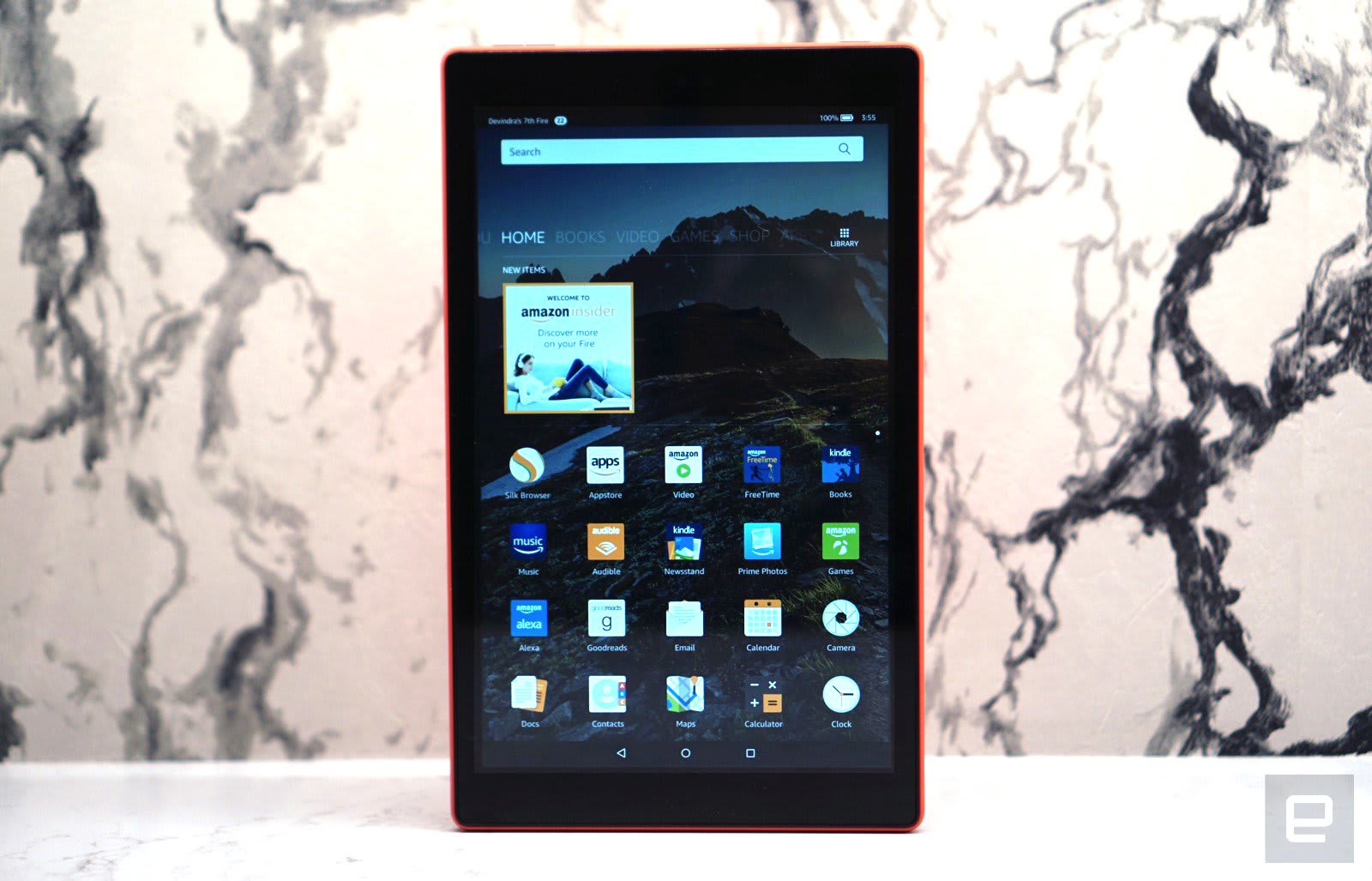 While you can install popular Android apps on the Fire HD 10, like Netflix, Evernote and Spotify, Google's services are noticeably absent from Fire OS. That means no Gmail, no Google Maps and no Google Calendar. Of course, that's been the case with all of Amazon's tablets, but that doesn't make it any less frustrating. You can, of course, use the built-in email app and Amazon's Silk browser, but they're no match for native Android Gmail and Chrome. There are also ways to hack the Fire HD 10 and install Google's services, but that's not something that'll help mainstream users.

Given just how much Amazon had to customize Android for Fire OS, there's little chance Google would ever grant access to its apps. But since Android slates have been in a death spiral over the past few years, it'd be wise for Google to work more closely with the one company that's built successful tablets on its platform. Let's face it: The search giant needs to do more than just shove Android apps into Chromebooks. 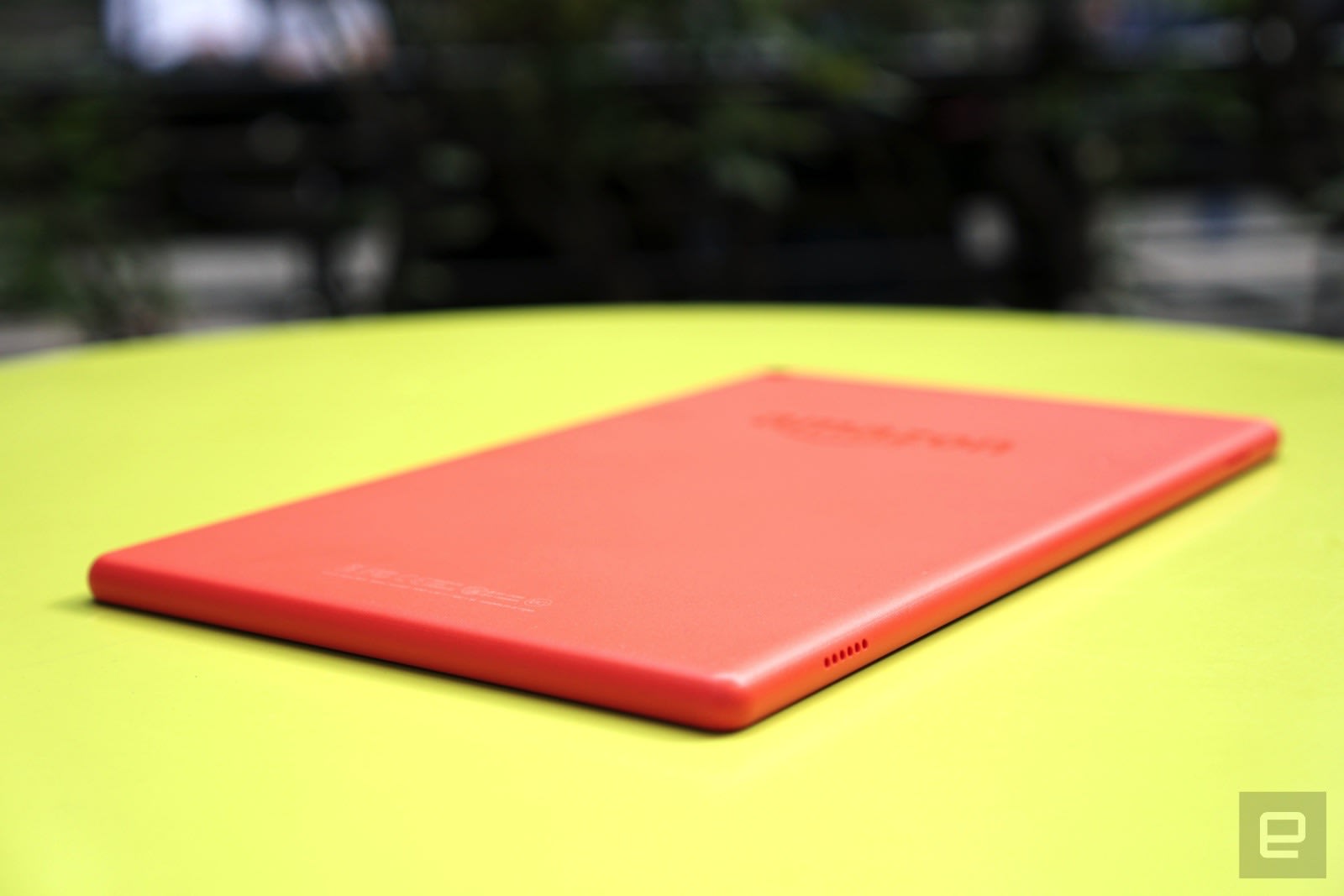 In addition to the standard 32GB Fire HD 10 for $150, there's a 64GB model going for $190/£180. You can also remove Amazon's special-offer ads on both for an additional $15/£10. While there are plenty of cheap Android tablets on the market, there aren't many I'd actually recommend. Even Google has given up on its Nexus tablet lineup (a shame, because the Nexus 7 was great).

Consequently, Amazon basically competes with itself when it comes to low-end slates. The new Fire HD 8 starts at $80/£80, with 16GB of storage, and the svelte Fire 7 goes for just $50/£50, with 8GB. If you're worried about the portability of the HD 10, the 8-inch model might be a solid compromise.

If you want something even more powerful, with a wider assortment of apps (including Google's), then it's worth looking at Apple's newest iPad. It's just $329 and features a much better screen and superior hardware. Of course, that means hopping over to iOS, but your only other alternative in the Android arena is the Galaxy Tab S2, a two-year-old slate that still sells for $300. It has a gorgeous screen and it's incredibly thin, but its aging hardware doesn't seem like a good investment today. (If you find it on sale, though, it's worth a close look.) 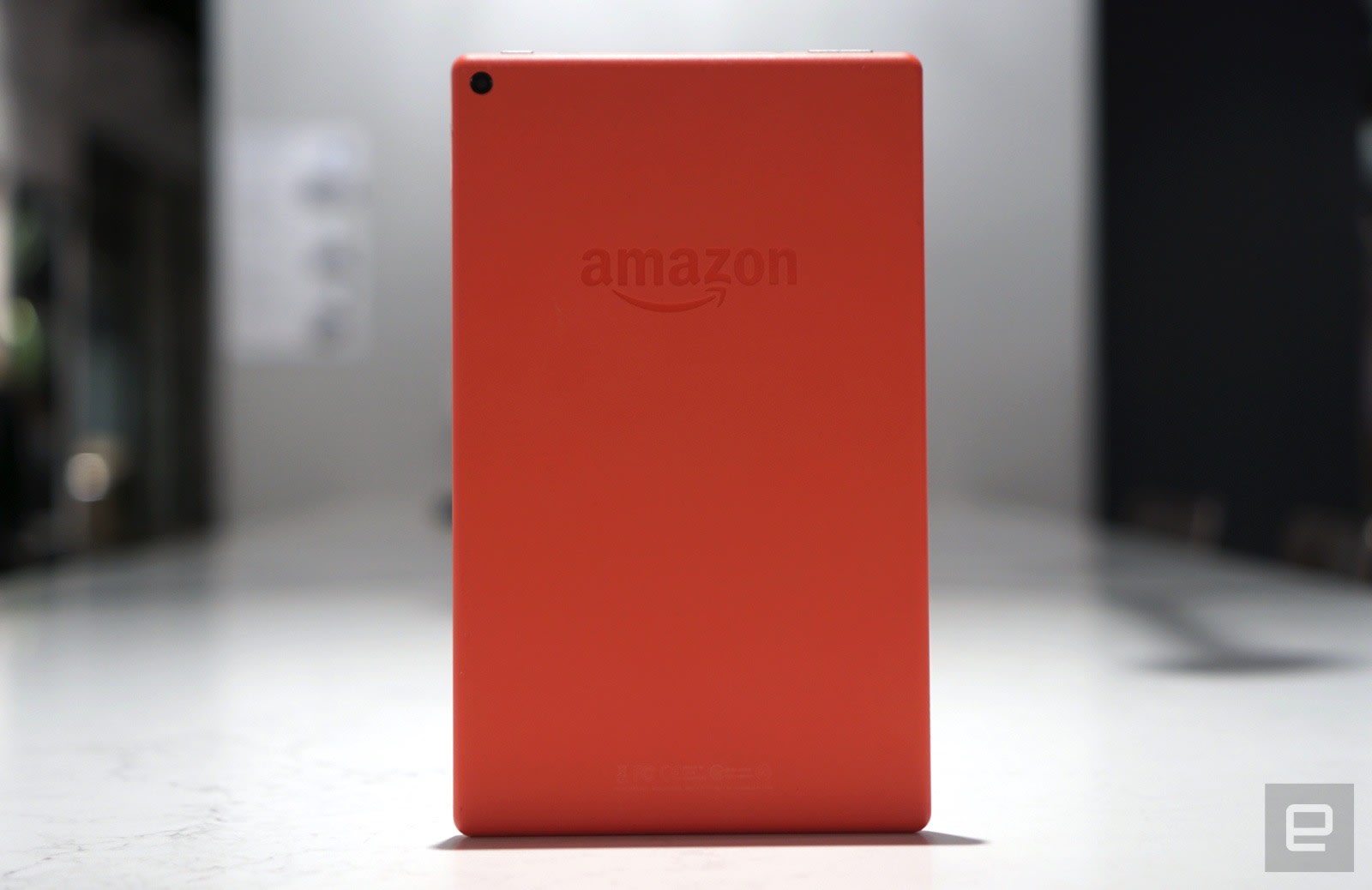 The Fire HD 10 is a glimmer of hope in the barren Android tablet wasteland. It fixes everything we didn't like about the last model, while dropping down to an incredibly low price for a 10.1-inch slate. It's just a shame that such a well-crafted Android device can't run Google's services. As it stands, though, the Fire HD 10 is still the cheap slate to beat this year.

All products recommended by Engadget are selected by our editorial team, independent of our parent company. Some of our stories include affiliate links. If you buy something through one of these links, we may earn an affiliate commission. All prices are correct at the time of publishing.
View All Comments
Amazon Fire HD 10 review (2017): A $150 tablet that's actually good