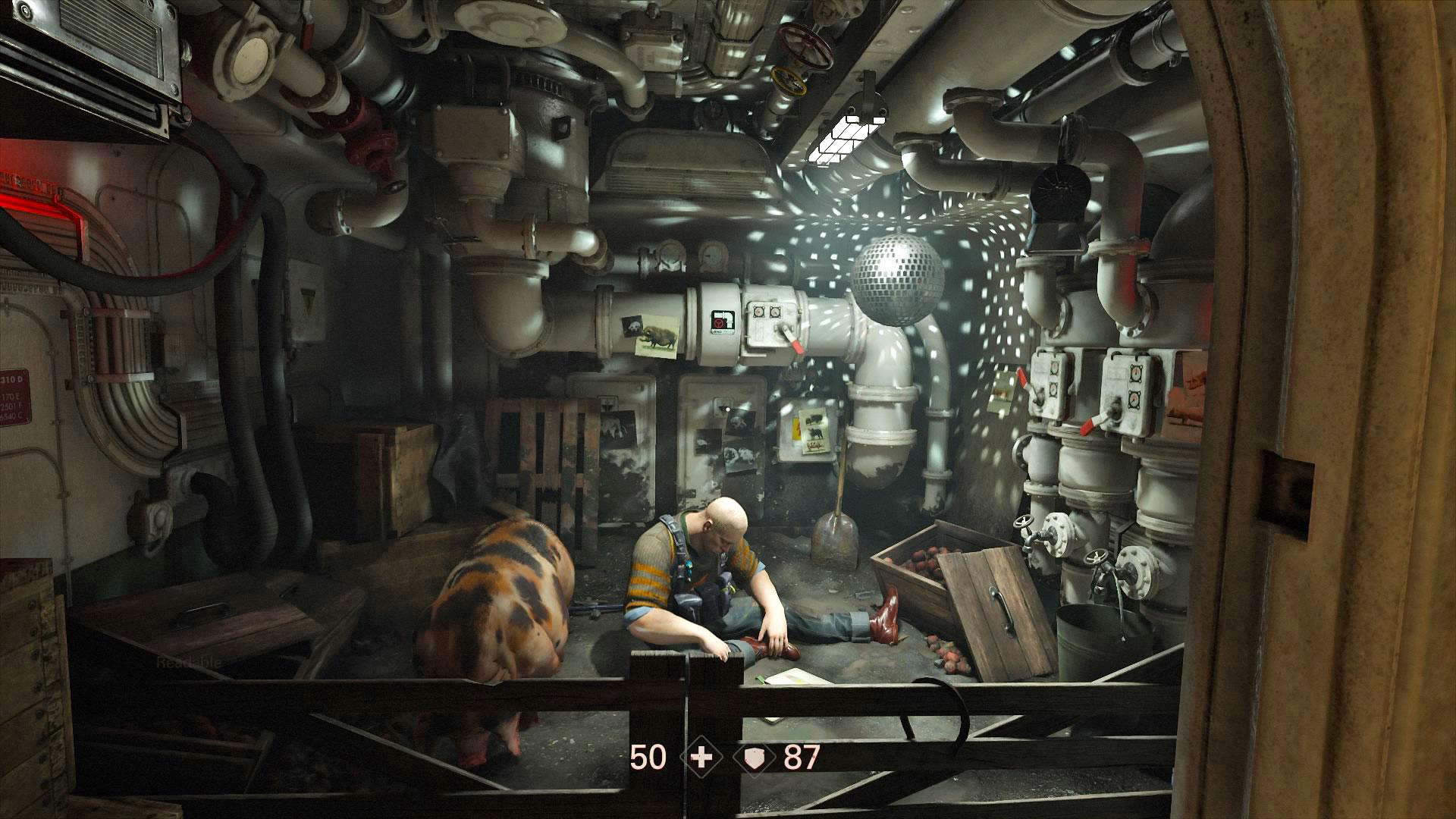 Wolfenstein II: The New Colossus is experiencing a serious case of opportune timing. It's a game all about shooting Nazis, but that's not new for the franchise -- what's new, this time around, is the social climate in the US. Nazis are in the news and marching with tiki torches on the streets. Members of the Ku Klux Klan are donning their cloaks in broad daylight. The president has invited white nationalists into the White House. Wolfenstein II's goose-stepping villains and its themes of a complacent, Nazi-ruled America are shockingly relevant in 2017.

But how does the game actually play? Wolfenstein is, at its heart, an action-heavy first-person shooter packed with all manner of ridiculous weapons and abilities. Shooting is its main focus -- and, in the following discussion, it's also ours.

Let's get one thing out of the way first: Wolfenstein II is a great game.

It is! I had an inkling it'd be good back when I played it at E3, but you never know how the end product will play at home compared to a highly-controlled preview situation at a trade show. Oh, hi, Agents of Mayhem. You didn't play The New Colossus at E3 though, so I'm curious what your thoughts are coming at it fresh.

I know the moment Wolfenstein II had its hooks in me. It's not far into the game -- it's a dramatic, cinematic scene right after a hectic round of running down spaceship corridors, shooting Nazis and trying desperately not to die. Blazkowicz, the game's hero, emerges from a pod holding the headless corpse of one of his friends. Music swells as he carries the body, in slow motion, across the bridge.

It could have been cheesy, attempting to shoehorn emotion into a traditional, gritty first-person shooter -- but, instead, it was powerful. It drew me into Wolfenstein's world and immediately endeared me to this broken, ragtag group of revolutionaries attempting to dismantle the Third Reich's reign.

“It's a refreshing, diverse and audacious scene unlike any I've encountered in a AAA video game.”
Jessica Conditt

There are a few moments like this that stand out in my mind. Another crucial one, for me, involves a black woman casually breastfeeding her child while talking about the fragility of testicles -- it's a refreshing, diverse and audacious scene unlike any I've encountered in an AAA video game.

This is the heart of Wolfenstein, for me: The story. The people. The world. Not the actual shooting, which I actually have a few problems with.

Really? I don't mind the shooting. And I like how the game makes it clear that you should take out the ranking officers first so they can't raise the alarm and make life living hell. It's a stark contrast to Doom, where you had to figure out the best tactics for taking out hellspawn yourself. Sometimes I need explicit instructions.

Sure, the now-standard "left trigger to lock on, right trigger to shoot" thing is a little overzealous, but it keeps the firefights going at a brisk pace. Plus, it means I'm able to get to the next story sequence faster. And speaking of story, Wolfenstein II's is heavy right from the get-go. Moments after cowering in a closet as young BJ during a flashback sequence, helplessly watching his racist dad abuse his mom, I was a paralyzed witness to the diabolical Frau Engel decapitating beloved comrades. That's all within the first hour. When I played it at E3, it was clear BJ was broken both mentally and physically after years of fighting Nazis. But in context, it's much more than a cheap character trait. Instead, it's a driving force for the entire narrative. Plenty of FPS-protagonists talk to themselves (and the player), but BJ isn't cracking catchphrases like Duke Nukem. No, he's wearily reminding himself that he's fighting for a reason, pushing himself through unimaginable horrors because he's going to be a father. The thought of his family is the light at the end of the tunnel for him.

I also thought about Doom a lot while playing this game but in a very different way. I actually think Wolfenstein II could learn a lot from Doom, at least when it comes to movement and HUD layout.

In Wolfenstein, I find it extremely difficult to know where enemy fire is coming from; the lean mechanic is unwieldy and, quite frankly, I never use it; and thanks to a split health and armor system, I never know how many more bullets I can actually take. Blazkowicz feels like an underpowered glass cannon at times -- especially when I'm dying on the same level over and over and over again. At least load times are fairly brisk.

Maybe I'm just really bad at shooting in this game. There were moments I turned down my difficulty (I'm playing on Do or die, the medium-hard setting for "the experienced gamer"), something I'm generally loath to do. Honestly, I'm surprised to hear you haven't had any similar issues, Tim! I wonder if I'm approaching the entire game the wrong way -- running in wildly like it's Doom, rather than strategizing before attacking like Wolfenstein seems to want. 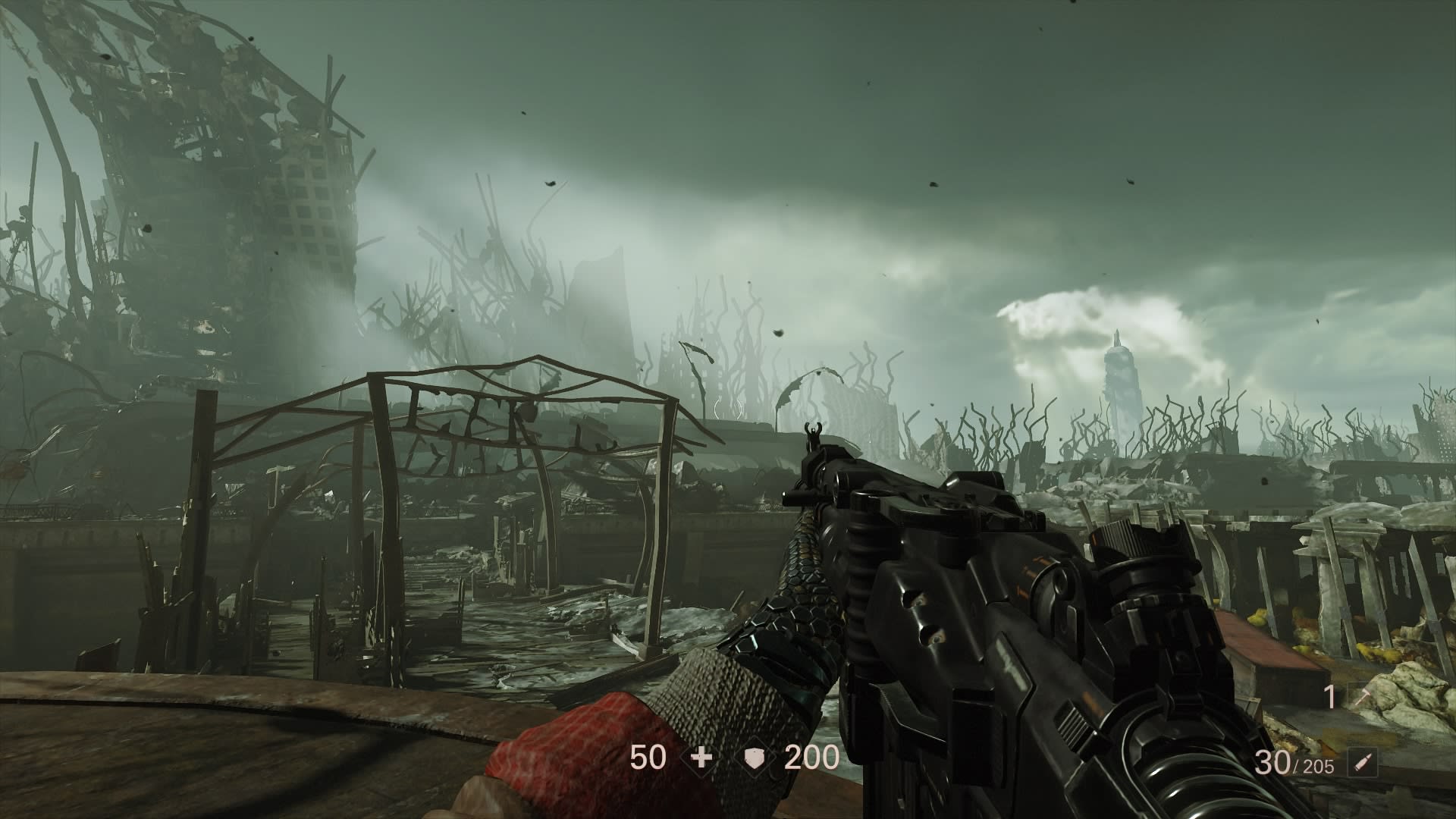 “I was learning the whole time and making progress, so I stuck through it and came out victorious.”
Timothy J. Seppala

That could be it? I'm kind of playing it like a slower Call of Duty because the control scheme allows for it. I'm finding that the best way to handle a pack of soon-to-be-dead Nazis when I'm low on health or armor is to hang back and snipe, or use short controlled bursts of fire. Which, now that I think of it, is the exact opposite of Doom, which forces you to get up close and personal with your enemies to get extra health packs or ammo.

Like The New Order, even on the default/medium difficulty setting (Don't hurt me) it isn't a walk in the park. When I first encountered the giant armored Nazi with the laser cannon and he boost-rushed me, I died. And then I reloaded, adjusted my tactics and died again. And then I found some health and armor, lured him up a stairway and unloaded my machine gun into him while his AI forced him back into the main room. And then I died again. But I was learning the whole time and making progress so I stuck through it and came out victorious, fighting inch-by-inch from one quick-save point to the next. I guess this is why so many people like the Souls games Fromsoftware makes. So many people, but not me. I'm not about that sadistic video game life.

You're totally right about the split health and armor readouts, though; I can never tell how ballsy I can be when it comes to an enemy encounter and usually end up dying the first time as a result. Being able to save anywhere takes some of the sting out of that, but I wish there were more autosave or checkpoint spots. It's not like I'm playing on PC where I can just reach up to the row of F keys and be done with it. Here I have to pause, go into the game menu and then select a save slot. It breaks the flow and takes me out of the experience. The enemy encounters are spaced pretty tightly, so it's not uncommon that I forget to save between them and have to start over again.

I'm not having many issues with figuring out where enemies are shooting from (thanks, surround sound), but what's been a constant source of frustration is that I rarely know where to go next. Hitting down on the D-pad brings up my next waypoint, but more often than not, the marker disappears before I can even spot it. So I have to keep spamming the D-pad to figure out where I need to go. It feels really clunky and, like the save system, pulls me out of the game.

In the early levels where you're on the U-boat, that's especially frustrating because everything looks the same. I have seriously unfriendly feelings about Wolfenstein II's waypoint system. I get lost in the game a fair amount -- lost and surrounded by Nazis with automatic weapons. It's not a great sensation.

However, none of the issues I have with the mechanics alter my main takeaway: Wolfenstein II is a fantastic game. Its guns are insane -- hello, laser cannon -- and customizable; its enemies are vicious yet believable; its world is rich, terrifying and hopeful. It feels wonderful to destroy Nazis in Wolfenstein II. I just wish I could spot them a little easier.

In this article: av, coopinion, design, fps, gaming, opinion, ps4, Wolfenstein, wolfensteiniithenewcolossus, XboxOne
All products recommended by Engadget are selected by our editorial team, independent of our parent company. Some of our stories include affiliate links. If you buy something through one of these links, we may earn an affiliate commission.