Your therapist will text you now

The smartphone in our pockets has redefined how we interact with people, engage with the world and get ourselves around. A constant connection to the world may be making some of us miserable, however, with a recent South Korean study suggesting that more than 10 percent of internet-using teens are at risk for depression. This may explain the explosion in the number of services, like Talkspace, that enable people to seek help with a mental-health professional online.

Rather than trek to a lavishly-appointed therapist's office uptown, users can simply reach into their pocket and get help. These e-therapy platforms offer a variety of options, from a Skype-esque video and phone calls through to a more instantaneous, text-based chat protocol. Talkspace claims to have around 500,000 users engaging with more than 1,000 professionals.

In fact, you can expect to hear more from Talkspace in the very near future, as it recently signed a deal with medical giant Magellan Health. At some point soon, Magellan's clients will be able to access on-demand psychotherapy, provided by Talkspace, through its own assistance program. That means if Magellan runs your employer's health-care provision, you'll have the option of contacting a therapist online as part of your package.

Talkspace emphasizes the benefits of online therapy, including the pros of having an on-demand, asynchronous relationship with their caregiver. Time-poor folks who struggle to carve out a couple of hours each week to journey to a clinic can still get the help they need. Plus, it's cheaper: An hourlong session in the real world could cost hundreds of dollars and may require wrangling with your insurance provider.

By comparison, Talkspace's plans begin from $32 a week, for which you can talk to a therapist once per day via text. For $39 a week, you're entitled to two check-ins per day, while for $49 a week, you can get that, plus an additional half-hour "live session" with your therapist each month. Other services charge similar prices, with rivals 7Cups charging $150 a month and Betterhelp asking $280 monthly.

Talkspace's Scott Christnelly believes that this push online has been beneficial. As well as overseeing therapist performance for the service, he is a licensed clinical social worker and psychotherapist. Before joining Talkspace, Christnelly worked at a community organization offering therapy to individuals with chronic physical and mental illness. "The job became more about paper and chart compliance and less about the healing relationships I formed with clients," he said. Talkspace enabled him to quit his job and build up an independent practice by going directly to individuals.

The challenges are different when offering therapeutic services online, especially when compared to the real world. Face-to-face, therapists are able to read a person's nonverbal cues in order to understand the subtext of what they're saying. "It's definitely a unique experience," says Christnelly, adding that "there is a learning curve in figuring out how to bridge that gap." For his part, he says that experts also need to "learn how to communicate warmth and empathy and understanding through the written word."

Another issue is the belief that, because it's online, the client's journey toward gratification or success is shorter. Christnelly says clients make more progress when they drop their need for an instant response or an ostensible cure. "It takes time for some clients to adjust to asynchronous communication," although he believes that the delay is actually "beneficial." The extra time between missives "gives the therapist and client time and space to explore their actions."

Technical issues aside, Christnelly doesn't believe that there's a big difference between therapy online and in the real world. "The issues are the same that I saw when working with clients face-to-face," he explained, and the clients are the same, too. "Everyone has different life circumstances," says Christnelly, "but share the same internal struggles as everyone else." 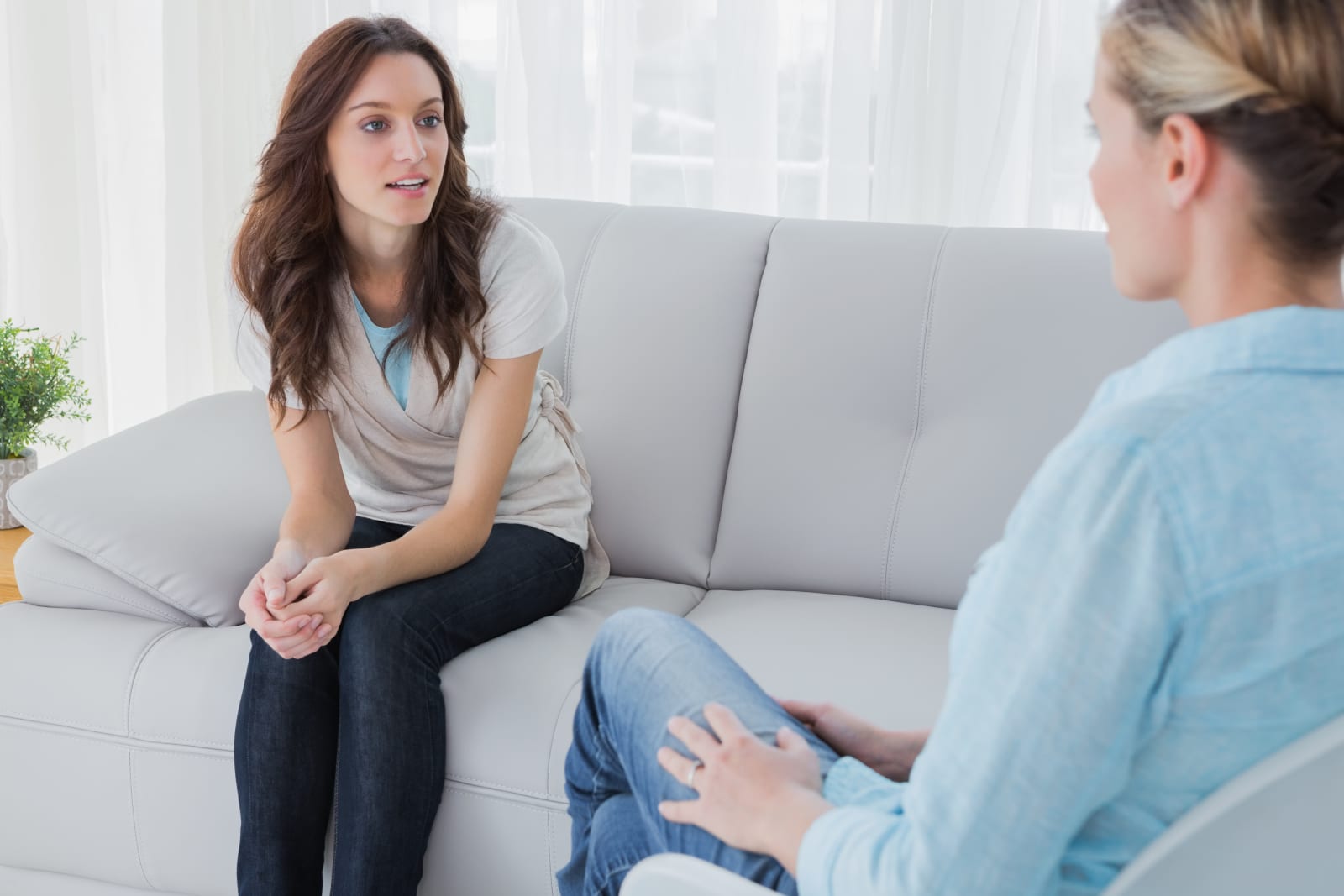 One of the benefits of online therapy is that the interactions can be instant, but also asynchronous, and you ultimately have the ability to choose how engaged you are. But when your motivation flags, or life gets in the way, it's easier to walk away from the project than a real-world therapist. Much like that gym subscription you bought January 3rd, a Talkspace account may be left fallow for long periods of time. Neglect could, over a year, amount to the better part of $2,000-worth of wasted money. Talkspace will only unsubscribe you if a therapist marks you as absent -- unless it's related to a complaint.

Then there are the risks and dangers inherent with switching from a direct doctor-patient model to an Uberized marketplace. In 2016, former Talkspace therapists blew the whistle, telling The Verge about the company's apparent failure to properly safeguard those who may be at risk. Whereas traditional mental-health professionals have a duty of care to notify law enforcement when individuals could be in danger, Talkspace users are anonymous to their therapists.

Other controversies have also hurt the service somewhat, including cutting off a therapist from clients when the therapist filed a complaint with the Department of Health and Human Services. Todd Essig, a prominent critic of TalkSpace, wrote in Forbes that the company behaved in a "hasty, ill-advised and hurtful," way. Essig has also said that online therapy platforms are no substitute for the real thing, creating "momentary feelings of being understood, which should never be confused with actually being understood."

Talkspace CEO and co-founder Oren Frank says that the platform has remedied a lot of these issues, revising and updating its approach as it goes. He told Engadget that it has been a process to "learn and improve our understanding of how remote delivery of therapy is different." Frank, a former advertising creative, founded the site with his wife in 2012 with the aim of making therapy cheaper and accessible "to all." The CEO says that the service has received "overwhelmingly good feedback,"

For all of Talkspace's potential pitfalls -- of which some therapists may believe there is many -- the company's success may not be tied entirely to its business. In fact, online therapy platforms more generally may be helping to make mental health care more accessible to more people. Talkspace even cites an extensive study concerning almost 99,000 veterans with mental-health issues before and after exposure to long-distance psychiatric help. It claims that online therapy managed to reduce instances of hospitalization by around 25 percent.

There are still, however, caveats, like the sort found by Gabrielle Moss when she tried Talkspace out for Bustle back in 2015. Moss, who has lots of experience using real-world therapy, found it far too easy just to ignore the app's requests for contact. "I hadn't realized that much of what I was paying for," she wrote, "was the accountability." "Since there was no appointment," she added, "and since I could erase those push notifications without even reading them [...] I fell off the web-therapy wagon almost as quickly as I started."

Talking to Engadget two years later, Moss said that, on reflection, "in-person therapy is the gold standard for a lot of reasons -- not least of all because you can easily ignore an email from an online therapist." "The fact that it's hard to cut and run on an in-person therapist is positive," because, she added, "when you feel the urge to flee, it's tied to the fact that it's bringing up scary feelings or memories that you don't want to deal with."

The distance created by online therapy, as Moss says, makes it "just too easy to end things because I was being pushed even slightly out of my comfort zone." That's not to say that online therapy has no value, however, and she believes that it can be a "great tool" for people who "can't physically access a therapist." Be it because of cost, geography, mental health or any other barrier, online therapy "can bring therapy to people who would not have been able to access any other form." Although, in her mind, it remains a useful but not entirely satisfying substitute for the real thing.

In the future, the service's sheer availability could well help reduce the stigma around mental health and encourage more folks who need help to seek it. Not to mention that having ubiquitous access to a calm, helpful voice on the other end of your smartphone or computer should reduce potential crises.

Online therapy cannot replace more direct interventions that are required in serious cases. If a person is in direct risk as a consequence of their own feelings or those of others, then the platforms discussed in this article are not a suitable place to seek help. In those instances, people are advised to reach out to agencies like the National Suicide Prevention Lifeline or the emergency services.