Whether you're demo-ing a song for your band or recording a masterpiece to share on Soundcloud, you'll likely need a couple of things to connect to your computer. If you're planning on having any real instruments or vocals, you'll need some sort of audio interface to turn your analog sounds into digital ones. I have an M-Audio MobilePre USB for that task, which runs about $180 on Amazon. In addition, you probably want to have a MIDI controller, to "play" all those sounds you don't have real instruments for. These can typically cost $250-$500 or so, depending on features. At $300, IK Multimedia's iRig Keys I/O 49 comes in at the lower end of this bracket.

As the name suggests, it's a MIDI controller with 49 full-size piano keys and one important addition: a built-in audio interface that records 24-bit audio at a 96kHz sampling rate. As with similar controllers, the iRig Keys I/O works with PC, Mac and iOS devices and whichever software you're already familiar with. The keyboard powers via USB from your computer, a DC charger (not included) or four AA batteries, making it a super-portable solution.

The physical layout of the iRig Keys is intuitive, with big, easy-to-access controller buttons, knobs and touch-sensitive sliders above the piano keys. As with most MIDI controllers, there's the usual complement of pitch shifters, modulation controls, velocity-sensitive pads and other programmable buttons.

I love having physical controls to control the various sounds I'm playing with on a keyboard like this, and the iRig unit has them all laid out in an intuitive way: pads on the right, knobs in the center and sliders to the left. Everything is labeled nicely, though you'll need to know what each does if you're playing in a dark bar or recording studio without a mini-light clipped on -- none of the labels light up.

The ports and the switches on the back of the iRig I/O 49 cover all the bases, too. There's a toggle for USB power, a DC port, and then a Mini-DIN MIDI port for the included USB or lightning cables that connect the keyboard to your device. Importantly, there's the aforementioned headphone jack and balanced outputs for connecting to a PA or amp.

The keys are unweighted and made of plastic, so if you're looking for a higher-end feel, you might want to go elsewhere. Still, playing the iRig Keys feels as good as any other USB controller I've played. The general build quality is pretty high-end, down to the soft rubber feet on the bottom to keep it from sliding around on the table. It's hard to overstate the joy of playing with keys that are the same size as a real piano. If you've ever tried to hit chords with a mini-sized rig, you know just what I mean; my fat fingers need as much space as possible to hit even the most basic of chords.

Of course, any MIDI controller is only as good as the software it can access, and the iRig Keys I/O comes with some decent free apps on iOS and Mac/PC, including IK Multimedia's own SampleTank, Ableton Live 9 Lite and Studio One Prime. Your purchase also nets you a couple of different orchestral and synth sound banks and T-Racks Deluxe mastering software (a $300 value in itself). If you don't already have a preferred music-making app already, the included software is a good start, though getting the sounds from SampleTank for Mac was a rather tedious affair, thanks to the multipart download. 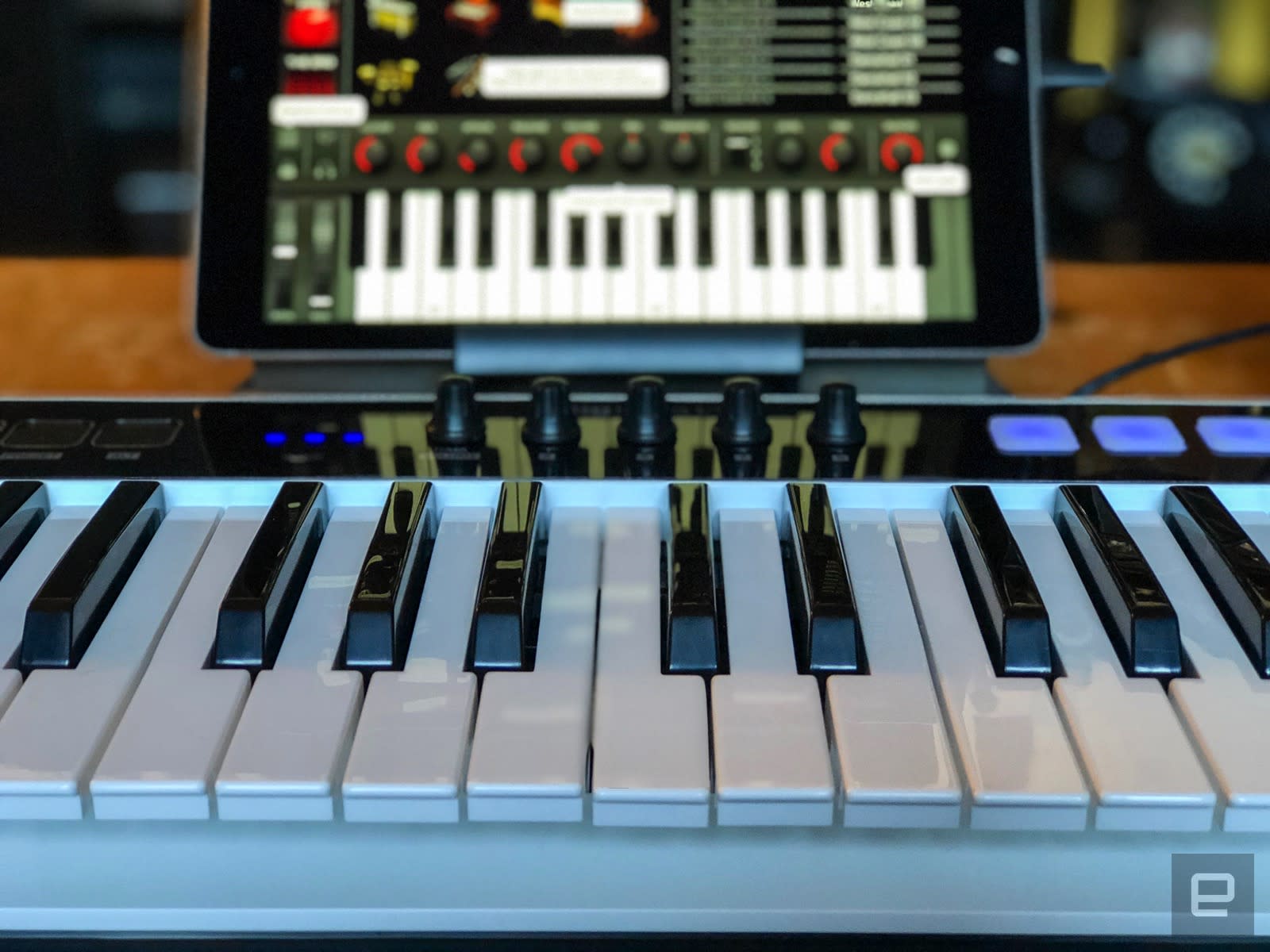 I mostly use GarageBand on iOS and Mac, since that's the system I'm most familiar with these days. Connecting the controller was a simple plug and play affair -- I never had to worry about extra cables or dongles, or even power plugs. I just sat down, plugged the iRig Keys into my iPad and I was up and running, playing all sorts of electronic and orchestral sounds with ease.

I've been using MIDI controllers of various stripe for years, connecting keyboards large and small to my Macs and iOS devices. I've messed around with tiny keyboards that have a much smaller footprint. I've played with full-size weighted keyboards that needed a separate MIDI box to connect to my computer. I've recorded in decently sized home studios with mixers and input racks and all kinds of expensive equipment, and I've recorded some stuff in tiny little apartments with cords strung across the living room.

These days, I connect my guitar, bass or microphone to my Mac via a basic USB audio interface. I use a full-size Roland synth that also doubles as a controller to lay down stuff like strings, unearthly-sounding pads and things I don't have readily available, like horns or woodwinds. It's a ton of stuff that I have to unpack, set up on a table and then put away when I'm done.

What excites me about the iRig I/O is that I can just have one main box on the table now, powered via USB. I can quickly plug in my guitar, bass or iPhone to the keyboard, monitor through the unit itself via headphones or a little studio monitor. When I'm finished, I simply unplug a couple of cables and lean the iRig against the wall. The 49 keys allow me to stretch out across several octaves easily, and the smallish footprint lets me a create a fairly competent home studio right on my coffee table.

I'm looking forward to playing live with this thing, too -- we already have a keyboard player with a full-size instrument on stage, but being able to drop in some AA batteries and connect the iRig Keys I/O to my iPhone for extra sounds is a pretty great thing. Our practice studio isn't super-huge, and I already have a guitar, pedalboard and microphone in front of me.

All of that ability and potential adds up to a much more streamlined, capable rig for recording and performing. That it's only $300 is a huge plus, as well. I paid almost as much for my current audio interface alone, and it doesn't have a MIDI keyboard controller with programmable buttons attached. Making music quickly and in a small space is exactly what I do; having the iRig Keys I/O makes doing so much more easy and cost-effective.