This is what the OnePlus 5 should’ve been to start with.

The OnePlus 5 isn't that old, but it's already been replaced. The company just unveiled its new flagship smartphone at a launch event in Brooklyn, and it's understandably pumped about its new, almost-all-screen design. I've been playing with the 5T for a few days already, and it's a shaping up to be a powerful, pretty machine that's sure to make existing OnePlus 5 owners feel a little envious. If that's you, well, you don't need to feel too left out: In many ways, the 5T is still the same phone from earlier this year.

Frankly, it's a little strange that the OnePlus 5T exists at all. The company set a precedent last year when it released the OnePlus 3 in June, and quickly followed up with the improved OnePlus 3T just months later. That's essentially what happened here, but company representatives were quick to point out in conversation that the original plan was to focus solely on one phone -- the OnePlus 5 -- this year. You know what they say about best-laid plans. Note that this doesn't mean OnePlus is committed to a two-phones-per-year strategy — it has never publicly committed to that. In this case, it just seemed like the company found the right big screen for the right price and said, "Eh, why not?"

And what a lovely screen it is. OnePlus went with a 6-inch, Samsung-made AMOLED panel surrounded by narrow bezels below it and on the sides. The amount of empty space around the panel is roughly the same as on the LG V30, so it's no surprise that both are easy to grip. More importantly, the screen is bright and vivid enough that it's easy to forget it runs at 1080p — for those keeping count, that works out to a 401-ppi pixel density. That's a lower pixel density than what you'd get out of, say, a Galaxy S8 Plus, but the screen's still crisp enough that you can't spot individual pixels so the trade-off hasn't left me wanting. Still, OnePlus says the decision to stay at 1080p mostly came down to power and performance considerations, though it's worth noting devices like the S8 Plus handled the jump to 2K just fine. Maybe next year. 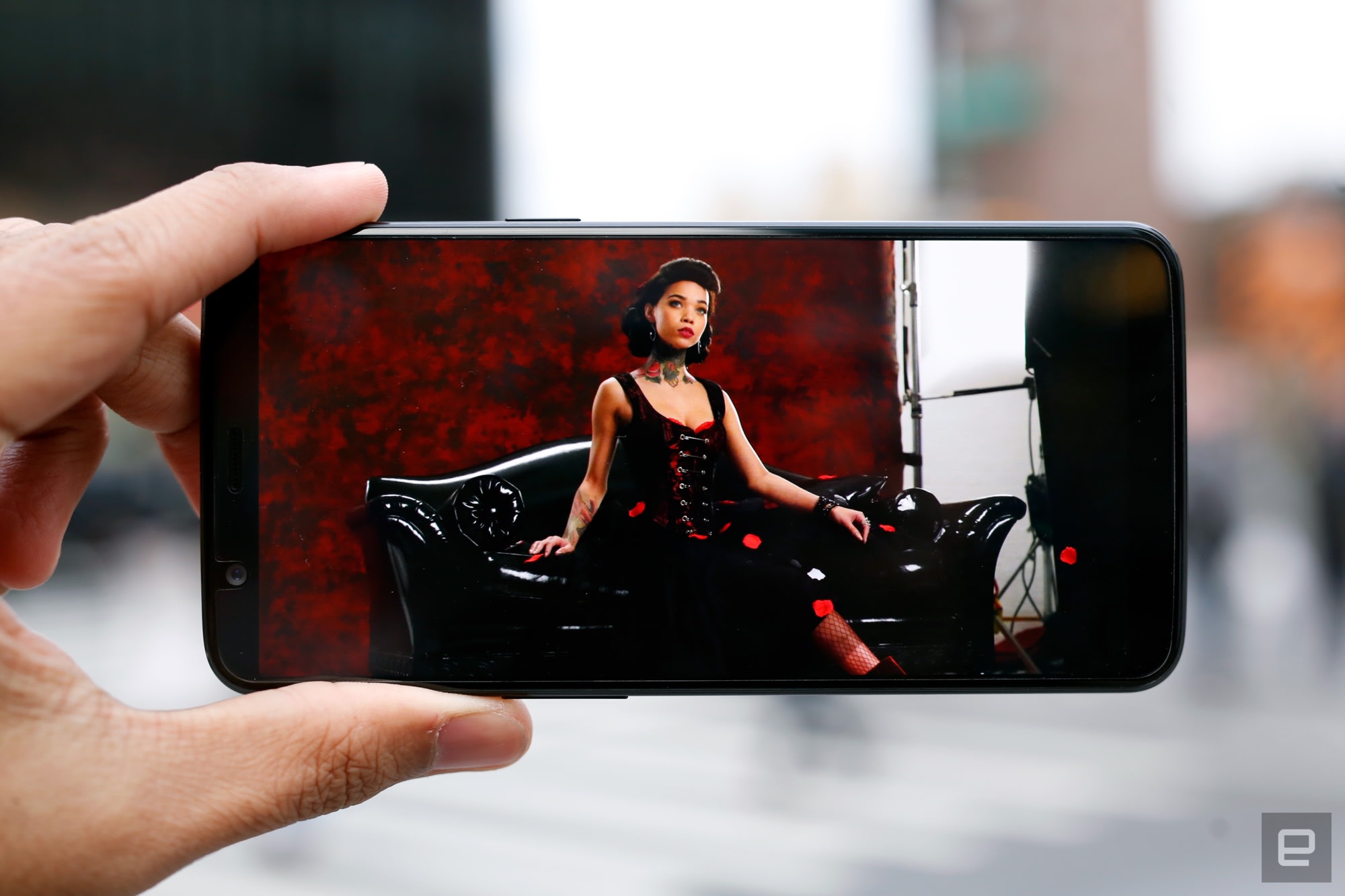 The screen is definitely the biggest change to the OnePlus formula, but the tweaks don't end there. Because there's no longer room for a fingerprint sensor under the screen, OnePlus moved it to the back. This won't sit well with some people, but I actually prefer this setup, even if it requires you to pick up the phone to unlock it. (It helps that the fingerprint sensor is still superfast.) To mitigate some of the potential blowback surrounding this decision, OnePlus also whipped up a handy "Face Unlock" feature.

Just to make it absolutely clear, this is a much less secure way to unlock the 5T. There's no clever technical trickery here, and no iPhone X-style infrared camera. Instead, the setup process has you staring at the screen while the phone uses its front-facing camera to spot "over 100" facial points it'll use to identify you going forward. I haven't been able to fool the feature with a picture of myself (yet), but it's at least theoretically possible. And beyond that, the lack of any additional hardware to power Face Unlock means the feature doesn't really work in the dark. 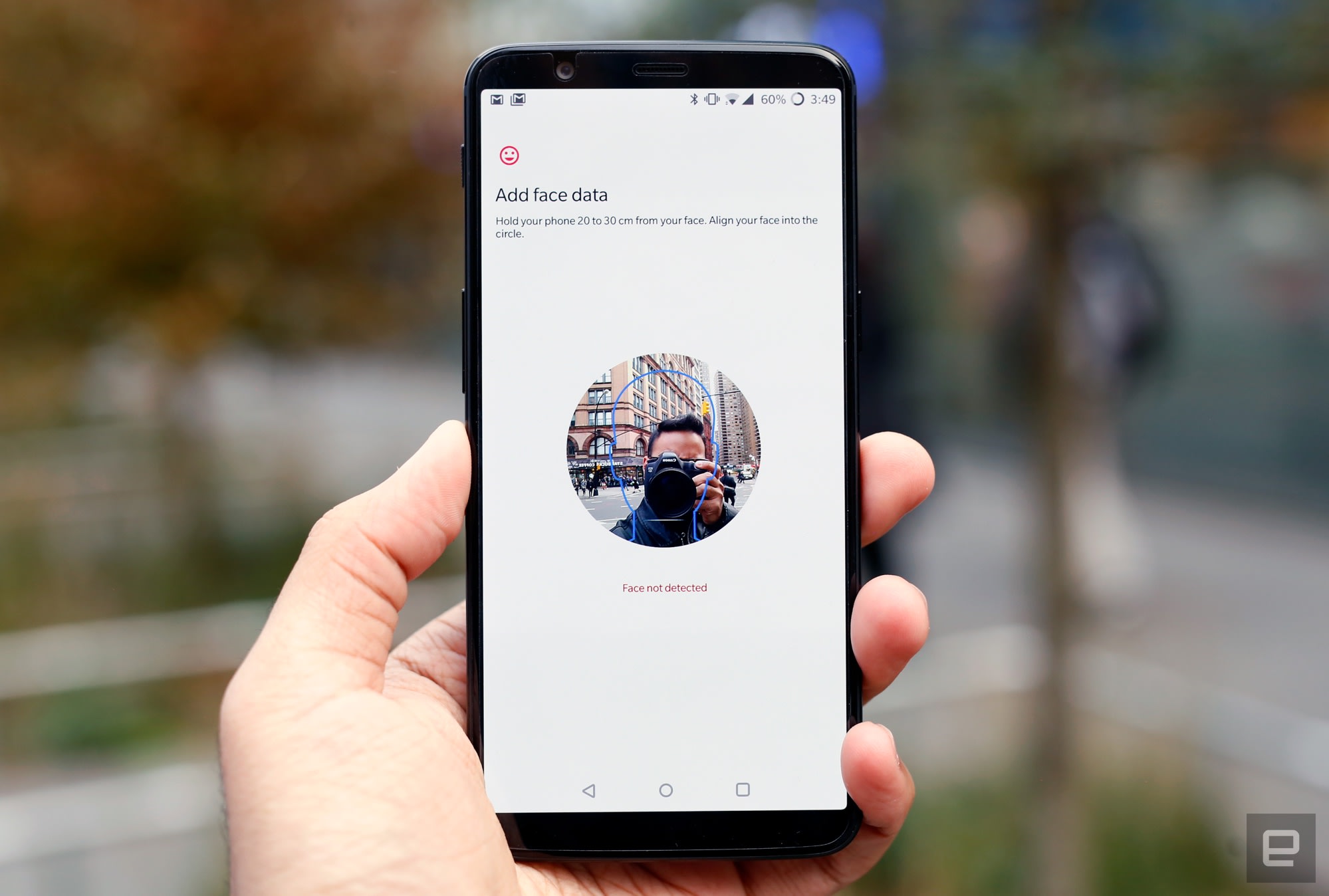 This isn't exactly an ideal solution, but it is a very fast one. Unlocking the 5T with my face was essentially instantaneous; most of the time, it felt like I was unlocking a phone with no security measures at all. Face Unlock's performance is as impressive as it is convenient, and that's exactly what the company was going for. You can't use your face to authenticate Play Store purchases or anything; situations like that still require you to use the more secure fingerprint sensor.

OnePlus also made some tweaks to its dual camera, though it's sometimes hard to tell. Once again, the 5T combines a 16-megapixel main camera and a 20-megapixel secondary camera, and that latter sensor got most of the attention. It now has an f/1.7 aperture to match the main shooter and is meant mainly to improve the phone's low-light camera performance. When things around you get dark, the phone switches into that second camera that combines multiple pixels into one, all in an attempt to make pictures look brighter than they otherwise would have. The difference is noticeable, but I wouldn't call it a game-changer. 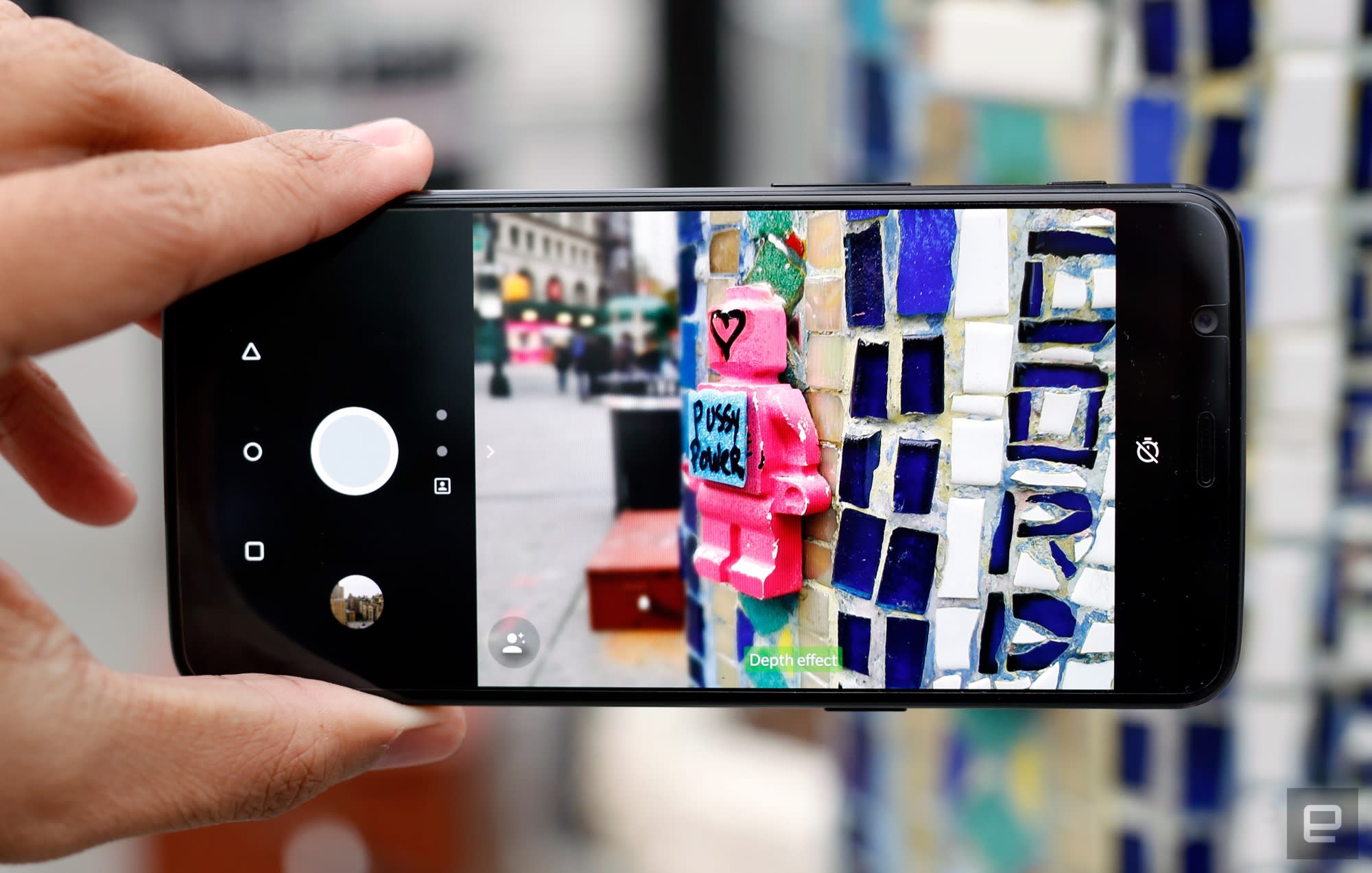 So far, the photos I've taken with the 5T have been pretty good — I'm especially fond of some of the blurry-background portraits I've shot — but many shots are soundly outclassed by those captured with rival smartphones. Don't get me wrong, improved low-light performance is always a good thing and the 5T is occasionally capable of excellent photos. It's just that we've seen some truly incredible smartphone cameras this year. I'll need a little more time with the phone to see how well it stacks up against the competition.

Other than that, the 5T is almost identical to the phone it replaces. It's just a hair thicker, longer and wider than the 5, but these gains are so incremental they're completely unnoticeable. And yes, those eagle-eyed phone fiends were right: The 5T bears a striking resemblance to other devices, especially Oppo's R11S. OnePlus admits that it "leverages" the Oppo supply chain when it benefits the company, but insists that any similarities are purely coincidental. I'll let you be the judge of that. 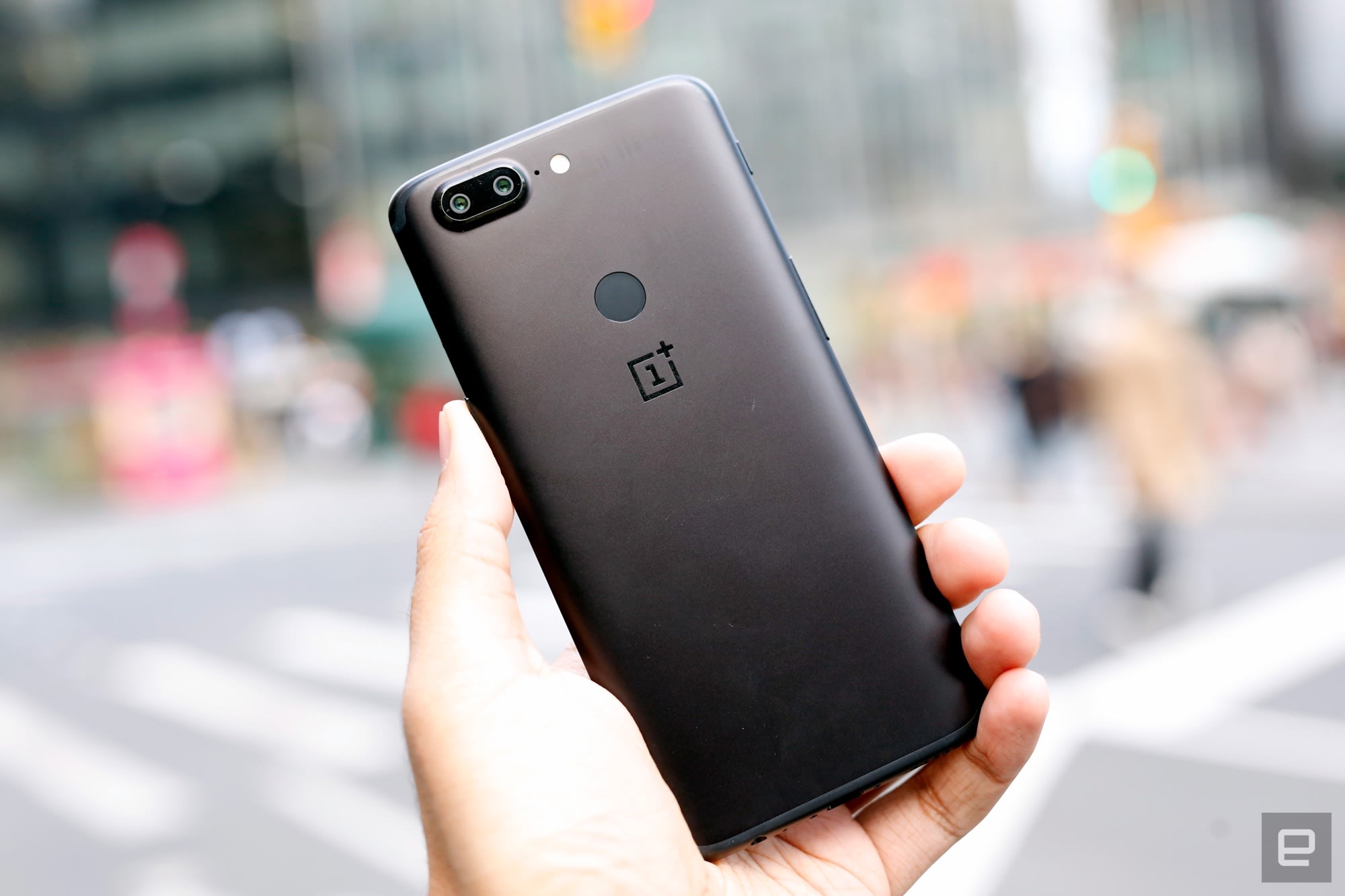 Unlike last year's 3T, which boasted a faster chipset than the 3, the OnePlus 5T uses the same Snapdragon 835 chipset as its predecessor. It's available in the exact same configurations, too: 6GB of RAM with 64GB of storage, or 8GB of RAM with 128GB of storage. I've been working with the latter, and there's no difference in performance between the OnePlus 5 and 5T. That's mostly a good thing, because the original 5 was already super-snappy, and the reliably clean version of OxygenOS (based on Android 7.1.1) definitely helps keep everything moving remarkably smoothly. While it's sort of a bummer that a phone launching this late in the year doesn't run Android 8.0 Oreo, OnePlus says a beta build of OxygenOS running on Oreo will be available by the end of 2017. (We'll see about that.)

Also unchanged is the 5T's battery -- it's the same 3,300mAh cell that was used in the 5, and in general I've easily been getting more than a full day's use out of it before needing a recharge. That the 5T's battery life is seemingly very close to the 5 is a pleasant surprise; I thought for sure I'd see the runtime take a bigger hit thanks to that bigger screen. That said, I haven't put the phone through the full review wringer yet, so it'll be a little while before the real differences in power consumption become apparent. If nothing else, OnePlus's Dash Charging system still works well. Ten minutes of charging typically netted me an extra 15 and 20 percent of battery life, while fully charging a bone-dry 5T took about an hour.

I have a lot more testing to do before rendering a final verdict on the OnePlus 5T, but it feels like this is the device OnePlus 5 should've been in the first place. There's nothing to be done about the past, though, and the 5T feels like a worthy successor to the 5 in just about every way that matters. Basically, your holiday smartphone-shopping decision just got a little harder. That said, OnePlus still has its work cut out for it: There's some lingering distrust among some users from when the company seemingly meddled with benchmark results, not to mention recent concerns about software snooping. We'll soon see if the OnePlus 5T is enough to get smartphone fans feeling the faith again.