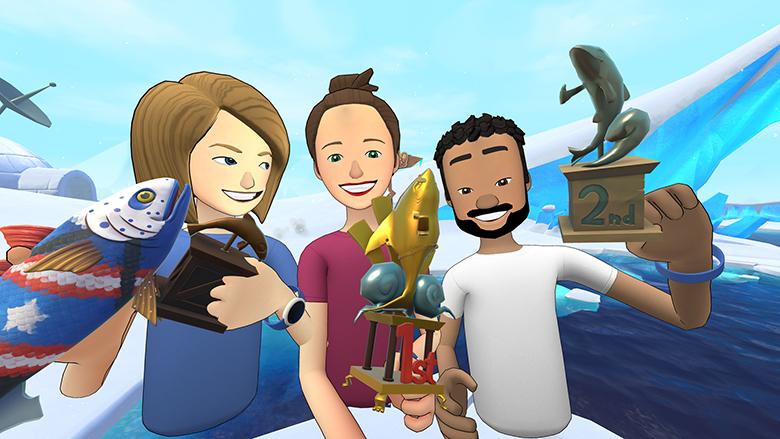 Facebook launched its social VR Spaces beta last April, finally showing us a compelling experience that helped put the social media company's acquisition of Oculus in the first place. Recently, Oculus showed off a little ice fishing game from casual game studio Resolution Games at the Oculus Connect 4 conference. Now, the game -- dubbed Bait! Arctic Open -- is ready to take you and a friend into Spaces VR together.

Bait! is an experiment for Facebook social VR gaming, but shows off the potential of VR with friends. The game is already doing well on Gear VR, says Facebook's Mike Booth, but bringing it to Spaces allowed the team to use it as a prototype for building third-party developer tools for more 3D games.

This ice-fishing title is intentionally casual, as well. "...fishing is one of those activities that allows you to be socially active and doesn't require 100 percent of your mental bandwidth," said Resolution Games' Tommy Palm (one of the folks behind mega-hit CandyCrush). "With this mix, you can engage in a really fun way, while also having conversations with your friends."

In this article: av, Bati!, facebook, facebookspaces, gaming, oculus, resolutiongames, rift, socialVR, spaces, vr
All products recommended by Engadget are selected by our editorial team, independent of our parent company. Some of our stories include affiliate links. If you buy something through one of these links, we may earn an affiliate commission.