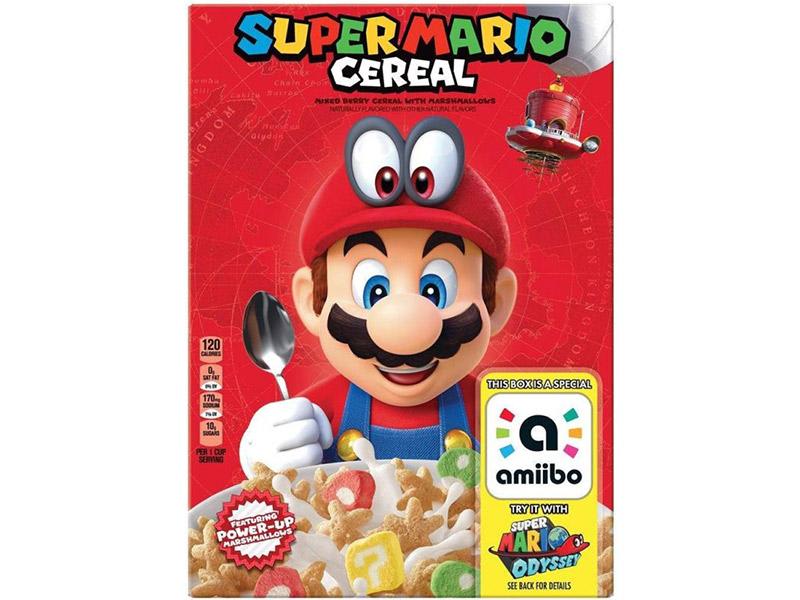 It seems even the Mushroom Kingdom eats cereal like the rest of us. Following the release of Super Mario Odyssey, breakfast blog Cerealousy has uncovered a new breakfast treat with Mario and Cappy on the box. Inside, you'll find star-shaped oats and marshmallow pieces in the shape of Super Mushrooms, 1-Up Mushrooms and ? Boxes.

Cereal makers have long included video game toys (and even discs) in their boxes, but Kellogg's is doing things a bit differently this time around. Thanks to box art discovered by Cerealousy, we can see that some boxes will include "special Amiibo" that can be used to power-up proceedings inside Super Mario Odyssey. Amiibo typically take the form of figurines, although Nintendo does sell card packs separately.

"We cerealously appreciate your continued interest in seeing a Nintendo cereal," Kellogg's told one eager Cerealousy reader. "We hope you'll keep an eye out for the new Super Mario cereal that is hitting store shelves now. This star-shaped cereal features Super Mario-inspired marshmallows, and a limited number of packages will have an Amiibo powerup sticker that can be used on the Super Mario Odyssey game with the Nintendo Switch gaming console."

According to gaming tipster Wario64, Super Mario cereal is already appearing the inventory systems of major US retailers. It can't be as bad as Mario-themed Happy Meals, can it?

In this article: amiibo, av, breakfast, cereal, food, gaming, kelloggs, nintendo, supermario, supermarioodyssey
All products recommended by Engadget are selected by our editorial team, independent of our parent company. Some of our stories include affiliate links. If you buy something through one of these links, we may earn an affiliate commission.