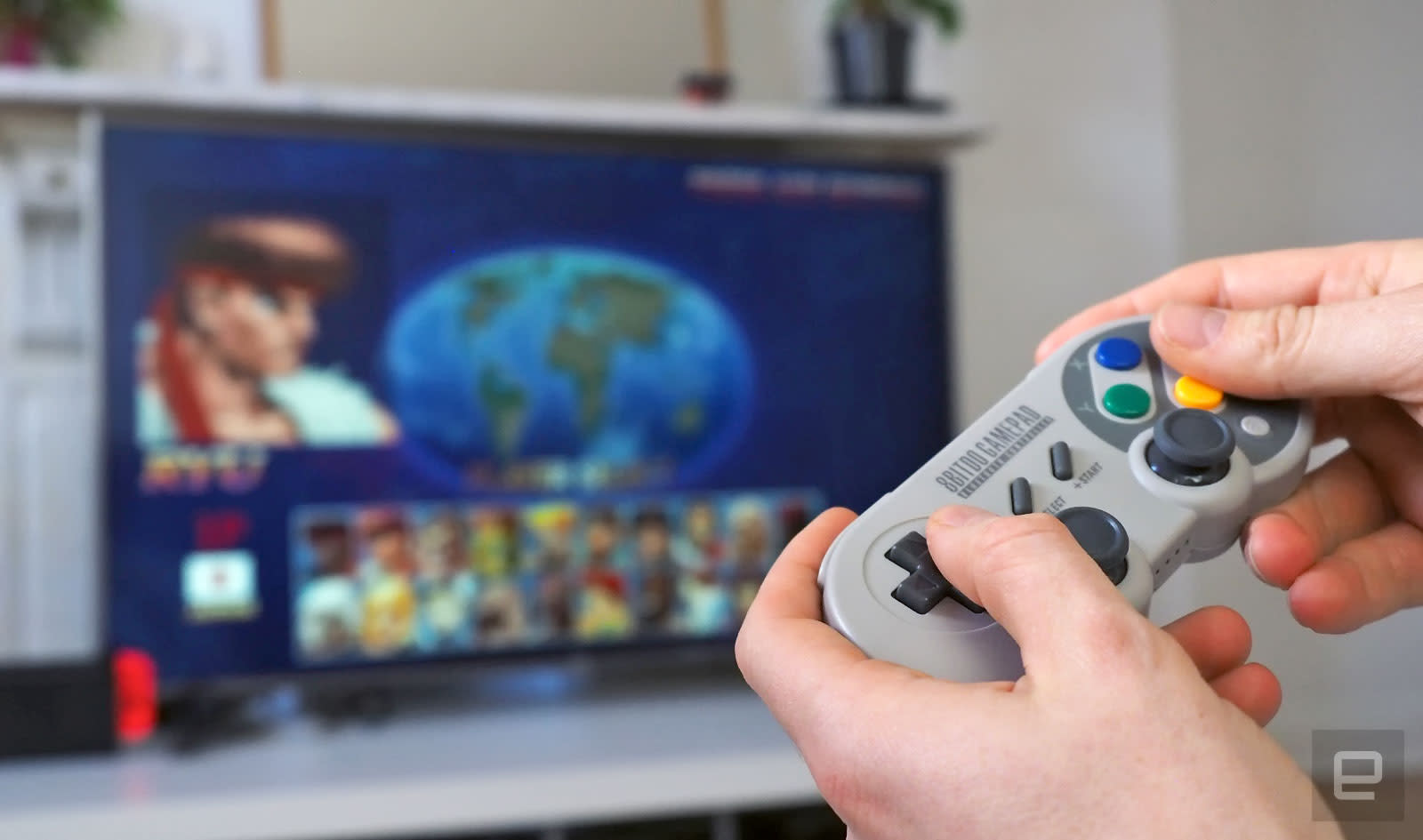 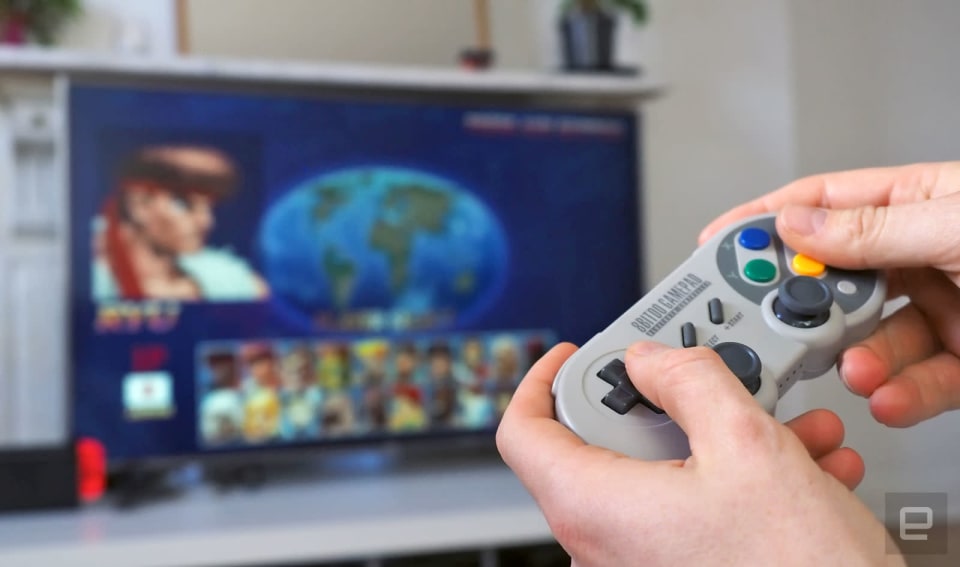 The Nintendo Switch's controllers shouldn't work as well as they do. That might be why options beyond a Joy-Con in each hand (or the Switch's own Pro controller) are few and far between. 8Bitdo's latest wireless peripheral, the SN30 Pro, might be worth considering for your secondary controller needs. Beside that allure of nostalgia, the SN30 Pro particularly shines with older games and tries to balance a classic design with modern controls. I picked up the (obviously prettier) European / Japanese model, the otherwise identical SF30 Pro, and had a play.

It's like the original SNES controller and PlayStation's DualShock had a wireless baby: two analogue sticks force their way into the 16-bit controller's iconic design. Iconic doesn't mean entirely ergonomic, however, and it doesn't feel as well-balanced as modern gamepads. It feels like the SNES controller you remember; it's just that the SNES came out two decades ago. Games peripherals have gotten better, if a little duller, over the years. 8Bitdo combined analogue controls with a NES controller design already, but the NES30 Pro was a little bit too small for so many inputs. The SN30 Pro feels like an improvement, simply by virtue of being larger. Like its predecessor, 8Bitdo added secondary trigger buttons on both sides as well as vibration support (although not HD rumble). It's also wireless and can be charged through a USB-C port. I kept a cable plugged into the back of my Switch's dock. I just wish the boxed cable was a little longer — it doesn't quite extend far enough away from my TV to allow me to play wired while it charges.

It doesn't quite do everything that Nintendo's own Switch controllers do: There's no Amiibo support or gesture controls. This is a Bluetooth gamepad, too, so it can connect to PCs, Macs and Android devices through Bluetooth, but let's not kid ourselves; this is for Nintendo consoles. There are also dedicated buttons for getting to the main Switch menu and taking screenshots.

The retro design brings one an arguable upgrade from the Switch's pack-in / built-in controller: its D-Pad. 8Bitdo's SN30 Pro maintains that unusual combination of spongy and springy just like you remember it, and I feel it's an improvement from the four-button assembly that the Switch has. No 3D printer needed.

This makes the likes of Ultra Street Fighter II and 2D indie games are wonderful to play on the SN30 Pro. The digital controls are a better fit, and with the former, the hadoukens seemed to flow from my fingers. The Switch is still a young console, and so I'm still waiting to see how Nintendo handles a virtual console this time around. The SN30 Pro was made for the likes of Yoshi's Island, Super Mario World and Castlevania.

For modern games with more complex control systems, a few cracks appear. Some buttons on the SN30 Pro have shifted ever so slightly to make space for the analogue sticks. The sticks seem very, very similar to the ones found on PlayStation controllers though the differently shaped SN30 Pro shell requires a bit of time to get used to. I held it a little differently, which, coupled with those sticks made for some unfortunate failed jumps in Super Mario Odyssey. The lack of motion controls was an occasional frustration too. The original SNES' shoulder buttons have now been split into two. The L1 and R1 buttons are a little too slim though, meaning I was prone to triggering the bigger L2 and R2 buttons below. It requires slightly more precise playing -- an issue that many had with the NES30 Pro. It's a shame that the Switch's Joy-Cons are just so comfortable to play with. You might think differently, but the analogue sticks, paired with a very slim body, isn't as easy to hold.

The SN30 Pro doesn't have the smoothest connectivity, either. At first, the Switch struggled to recognise and sync with the controller, bouncing me between a few tutorial screens. Later attempts to connect were a little less problematic, but it's not perfect.

There's one smart feature: Once you start up the gamepad, you can assign which device it'll be used with by pressing a preset button assigned to Switch, Android and the rest. (There's even a cheat sheet printed on the back of each controller.)

The SN30 Pro isn't the best controller for playing actual Switch games -- I find the Joy-Cons incredibly comfortable to use. It is, however, a smart choice for a second gamepad, one that is both perfect for retro games (with plenty of those coming) and for when a buddy comes around to best you in Street Fighter (not gonna happen) or to race along in Mario Kart 8 Deluxe. Both the purple-hued SN30 Pro and the obviously superior SF30 Pro are priced at $50 to preorder from Amazon, set to ship December 10th. And if this isn't your favorite Nintendo controller, well, there are other convoluted methods available.

In this article: 8bitdo, controller, gadgetry, gadgets, gaming, gear, nintendo, retro, RetroGaming, sf30pro, sn30pro, snes, switch
All products recommended by Engadget are selected by our editorial team, independent of our parent company. Some of our stories include affiliate links. If you buy something through one of these links, we may earn an affiliate commission.