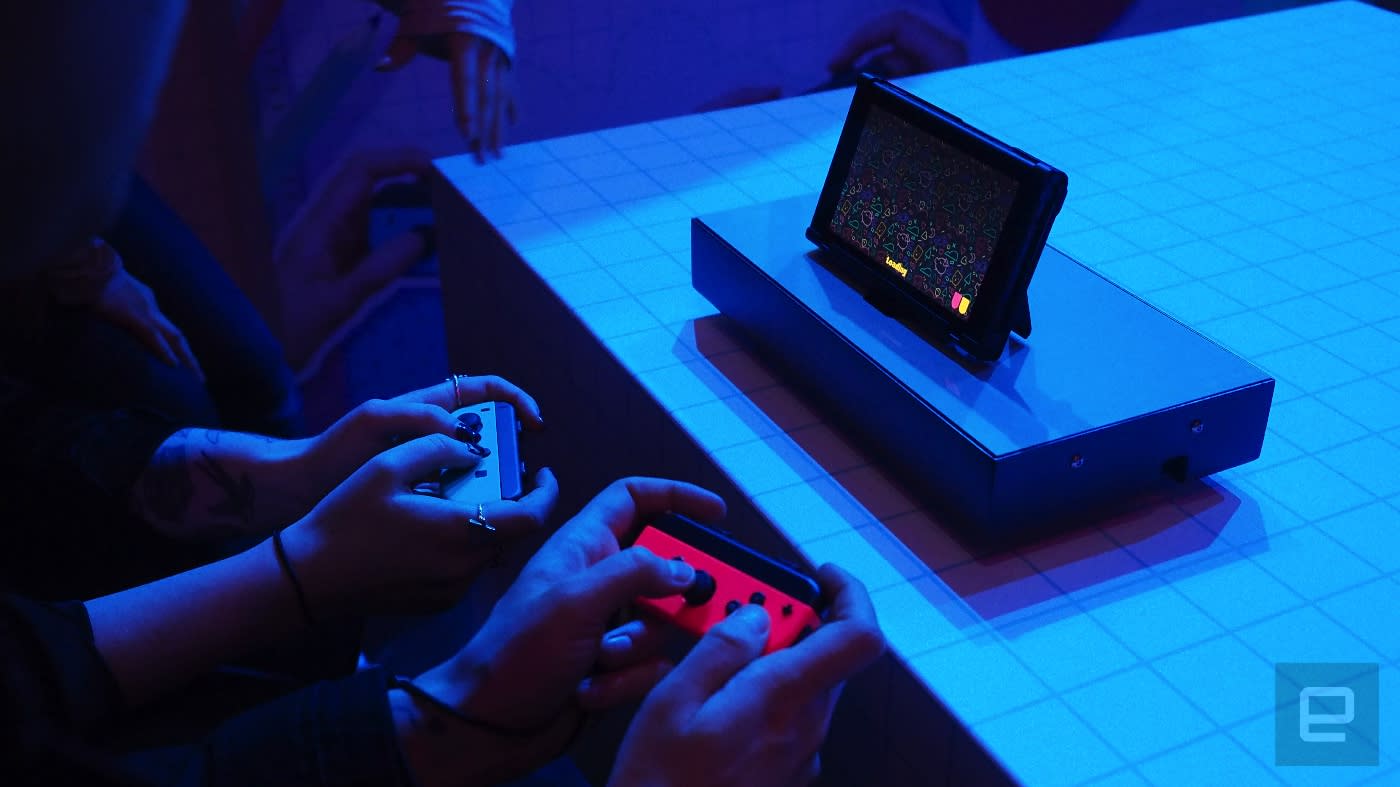 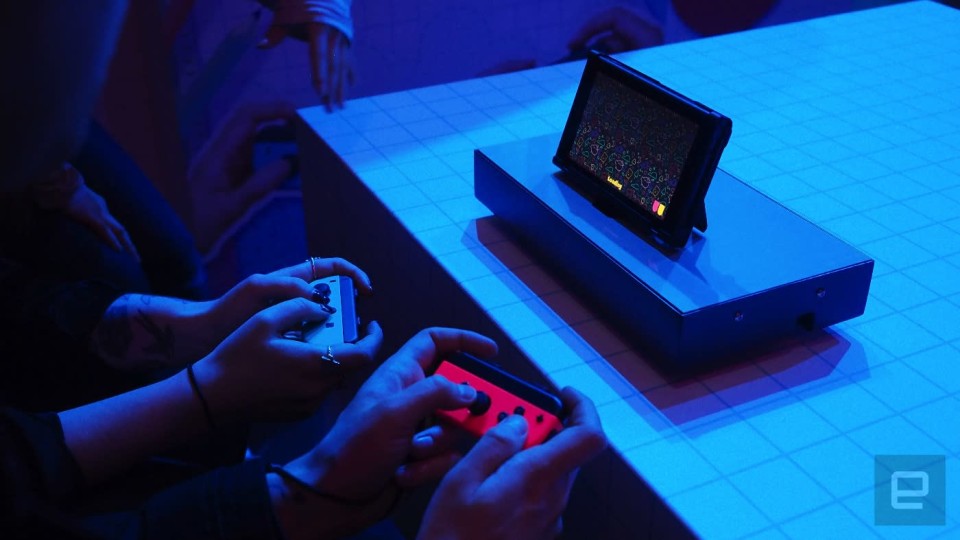 I spent half of last Friday tearing my way through games at Nintendo's big Switch launch event. More than any particular title, the highlight was the hardware itself: a $300 console-hand-held hybrid that's harder to describe than the latest Xbox or PlayStation. The Switch console is actually a tablet: It's the piece that does all the processing and acts as a screen when it's away from your housebound dock and TV. But if the tablet is the brains of Nintendo's strange new 2-in-1, the heart is split between the two included Joy-Con controllers.

Before the console even had a name, early reports suggested a hybrid device with detachable controllers -- an evolution of what the company attempted with the Wii U, but better executed this time. With the Switch, Nintendo planned to make its hand-held and home consoles one single thing. That's why the device ended up looking like either a robot dog's face or a futuristic toaster, depending on the use case.

Perhaps I'm drawn to the controllers just because there's so little to say about the Switch's main body. I live in a world filled with iPads and Surfaces. Other companies have tried this form factor for gaming too. And don't forget that Nintendo already makes a lower-powered mobile console. In short, then, there's nothing thrilling hardware-wise ticking away behind the Switch's screen. Nintendo's new console won't (can't!) go toe-to-toe with its rivals on specifications, so the company is trying a new approach. Again.

Say hello to the Joy-Con. Two of these controllers will ship in-box with the Switch, and are as solidly built as the rest of the console. While I really liked the remote-of-the-future aesthetic of the original Wiimote, the Switch's controllers are less chintzy and also better designed for gamers.

The Joy-Cons still work as motion controllers too, but they've been upgraded with some additional tricks. Because you get a pair of them, two-handed gesture controls could become the norm for single-player games on the Switch. In other words, no more nunchucks. That vision has a great proof-of-concept title in Arms, Nintendo's new game series, which takes the form of a one-on-one boxing game. Sort of, anyway. You grasp a Joy-Con in each hand like a knuckleduster, with your motions sending your rocket hands spinning toward your opponent. Because the controllers are identically shaped and appear to weigh the same, they feel more comfortable in-hand than Nintendo's earlier remotes, and you grip them just as you would many everyday objects. Where's the Cooking Mama Switch announcement, eh?

The 1-2-Switch banks on the silliness of hits like Wii Sports and Warioware, and the minigames here are utterly dependent on the Switch's motion controls. In fact, Nintendo's pitch when it came to revealing the title to the public is the ability to play without looking at the screen: You're focusing on your human opponent and using the most important part of the Switch: these controllers.

During the live stream, Nintendo hyped the Joy-Con's HD-vibration feature. It's meant to offer more-nuanced vibrational output that approaches haptic feedback as you play. These vibrations tell you if you're doing well, or even how to play.

After trying out all the 1-2-Switch demos on display at the launch event, it was the safe-cracker minigame that stood out. You rotate the controller to find multiple "bite points" on a lock, and the only way of knowing if that's where you need to keep the dial (to unlock it) is through a mildly different buzz of the controller.

Yes, these minigames are single ideas in a vacuum; none is meant to be played for hours on end. But, if games developers try to add nuanced vibration to Switch games, these titles will benefit from an extrasensory dimension.

There's another feature that I haven't gotten to test yet, involving a motion- and shape-detecting sensor embedded in the left-hand controller. Nintendo used the classic "rock, paper, scissors" game as an example in its live-stream broadcast. There's a game that uses this as a sort of motion detector within 1-2-Switch (it's a speed-eating minigame), but, alas, it wasn't on display at the event I attended. Like the HD-vibration feature, it's up to Nintendo to deliver intriguing game features with this new idea, but it's there: embedded in the controller.

But frivolous cow-milking and safe-cracking won't be what persuade early adopters and current PS4 and XBox One owners to buy a Switch. How do the Joy-Con controls translate to Nintendo's more-established game franchises?

The Wii U offered us a giant tablet on which to play home console games. The Switch offers the same form factor, but better-realized. It's more comfortable, the screen is more responsive and just plain prettier, and you don't feel like you're trapped with your controller options. Mario Kart 8 Deluxe, a remake, is an excellent example of the control options that will be available to gamers when the console arrives in March -- and how they could change the way we play popular titles. When I joined a circle of Mario Kart players at the event, then, each of us had our own dedicated console in our hands, steering with the Joy-Cons attached at the sides. Nearby, other gamers were playing through Pro controllers on huge TVs. According to a Nintendo promotional video, you can slide out the pair of controllers, offer one to a friend next to you, and race away. They don't have to own a console or a copy of the game. This is something the Wii U can't do. Nor the 3DS, for that matter.

It's all thanks to those Joy-Con controllers; they're equal parts peculiar and cool. The original Wii was a hit because of its brave attempt to reinvent the games controller, adding smart, responsive new control options that coaxed nongamers into playing. The company is now hoping to repeat that same trick.

In this article: editorial, gadgetry, gadgets, gaming, gear, joycon, nintendo, nintendoswitch, opinion, switch
All products recommended by Engadget are selected by our editorial team, independent of our parent company. Some of our stories include affiliate links. If you buy something through one of these links, we may earn an affiliate commission.