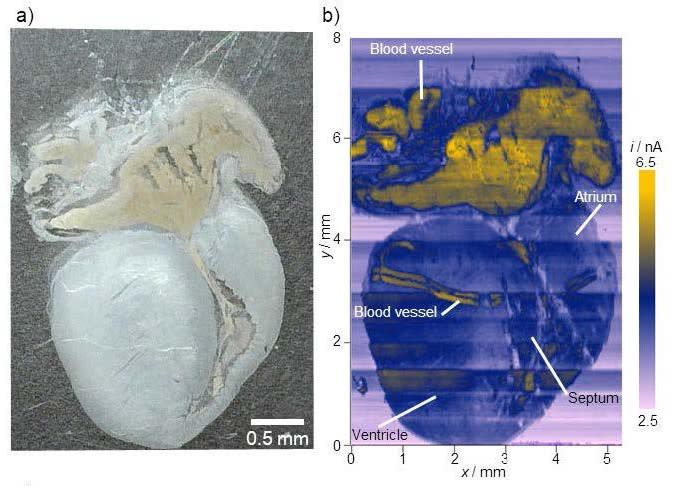 In a study published recently in Angewandte Chemie, researchers demonstrated that an imaging technique called scanning electrochemical microscopy could become a very useful medical tool. Rather than having to use additional chemicals like dyes or fluorescent markers to get a good look at tissue, this method uses electrochemical probes to detect natural biomolecules around the tissue.

In this study, the researchers used soft microelectrodes that were brushed gently across tissue samples. While it moved across them, it measured the electrical current produced by certain chemicals in the tissues to get an idea of the physical structure of that tissue as well as its composition. The team provided three separate demonstrations of this technique's use. In the first, it scanned mouse livers to show that a certain type of nanoribbon that's being studied as a potential drug delivery mechanism can be distributed throughout the liver. In the second, the probes measured hemoglobin proteins to get a full image of a mouse heart (the right side of the image above). And in another experiment, the researchers used the technique to show that it can accurately differentiate healthy human tissue from cancerous tissue.

In the future, the researchers would like to use this method to not only detect cancerous cells but also destroy them. "We are perfectly capable of using electrochemistry to kill cancer cells on microscope slides and in petri dishes," Hubert Girault, an author of the study, said in a statement, "but doing so in thick tissue is another story."

In this article: cancer, electrode, gear, imaging, medicine, microelectrodes, microscopy, research, scanningelectrochemicalmicroscopy, tomorrow
All products recommended by Engadget are selected by our editorial team, independent of our parent company. Some of our stories include affiliate links. If you buy something through one of these links, we may earn an affiliate commission.