Its lane-keeping skills need work, though.

The Honda Clarity line is now complete. After introducing the lease-only pure EV back in July, the Plug-In Hybrid and Fuel Cell models are here; I got to test-drive both at a recent event and came away impressed. Besides badges and refueling ports, the Clarity vehicles look identical. But their powertrains are different enough that it's almost like driving three completely different cars.

While the differences behind the wheel are noticeable, the platform itself and the interior mostly make for an enjoyable driving experience regardless of your drivetrain preference. The Fuel Cell version of the car handled nicely during my short time with it, but the limited refueling infrastructure means it's still an early adopter car, particularly for those lucky enough to live near fueling stations.

It's the Plug-In Hybrid (starting at $33,400) that will appeal to most customers. As with the EV before it, Honda has created a luxury experience in a midclass four-door sedan. With a range of 340 miles, the Clarity Plug-In Hybrid is ready for road trips. For drives around town and commutes, the battery achieves a range of 47 miles (via a 17kWh battery pack), which is more than enough to run errands and get you to work. Like every Clarity variant, you'll be comfortable sitting anywhere in the cab no matter where you're going. The seats are plush and enveloping, so much so that and even my 6-foot 3-inch frame found ample room in the backseat.

On the road, the Clarity Plug-In Hybrid's suspension is incredibly smooth. Backroads revealed some body roll, but no more than you would expect from a midsized sedan. Considering its size and weight, it did surprisingly well on the Napa backroads I encountered.

The car has three selectable driving modes: Sport, Eco and HV, plus "normal" mode wherein the car tries its best to use the battery until it's depleted or you stomp on the accelerator. Each of these modes performs as expected, but HV requires a bit of a tutorial. Press the HV button once and the car holds its current battery level. Press and hold the HV button and the car charges the battery to 57 percent. 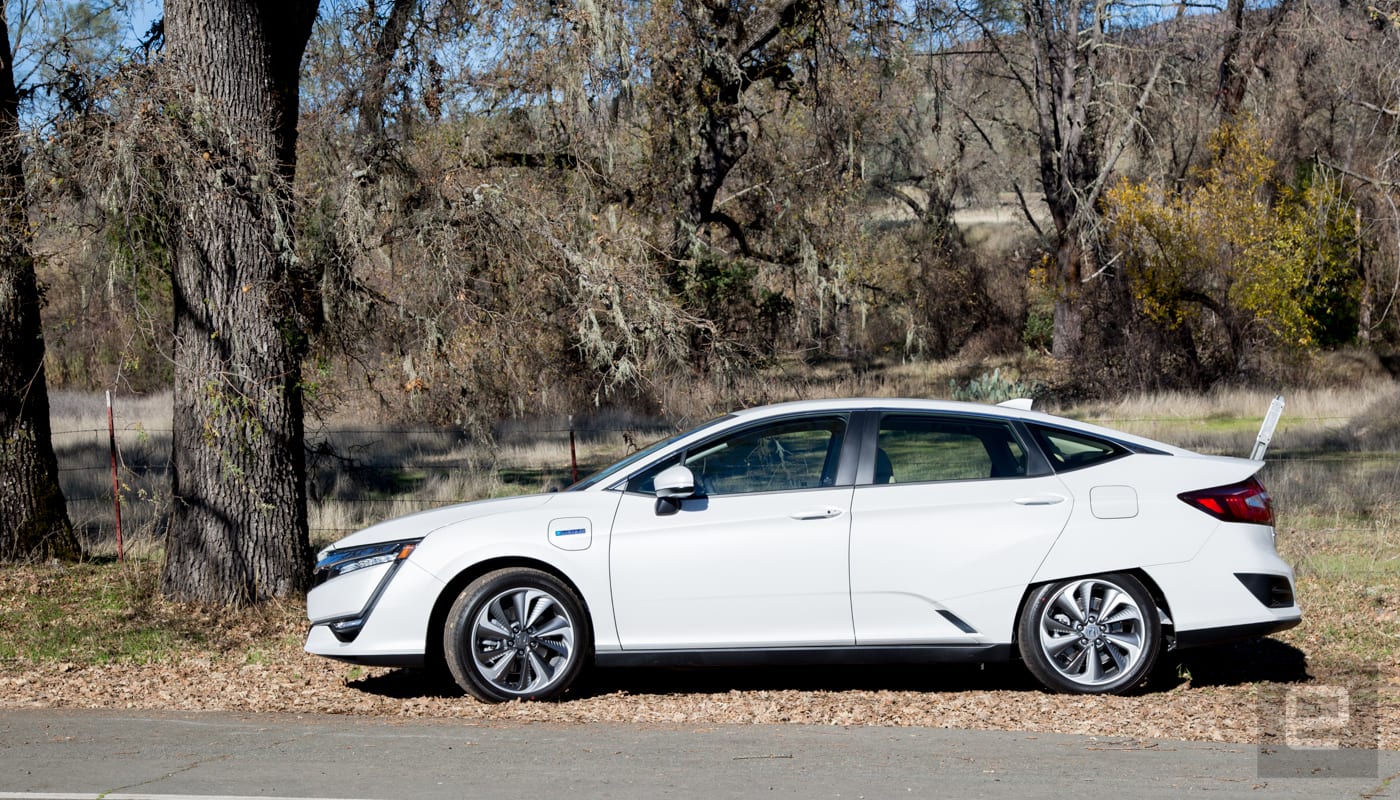 The Plug-In Hybrid also has regenerative braking paddles to the right and left behind the steering wheel. Respectively, these increase and decrease the friction and energy generation of the car. The odd thing is that in any mode besides Sport, whatever level you set, it disappears after pressing the accelerator. So you're constantly adjusting the regenerative braking while driving. It's a weird choice for Honda to make, but it does allow for a more interactive driving experience.

While behind the wheel, I also had a short demo of Honda Sense, the automaker's semi-autonomous driver-assistance system. The route that Honda set for me avoided the highway, where these driver-assistance systems are meant to be used. On the Napa backroads, though, I was able to activate adaptive cruise control, which worked well. The lane assist was fine in the straights, but anything other than a gentle corner and the system wasn't able to keep the car in the lane. Again, this is during limited tests, not on a highway. So it works, but it's not as polished as what you'll find on, say, the Nissan ProPilot. 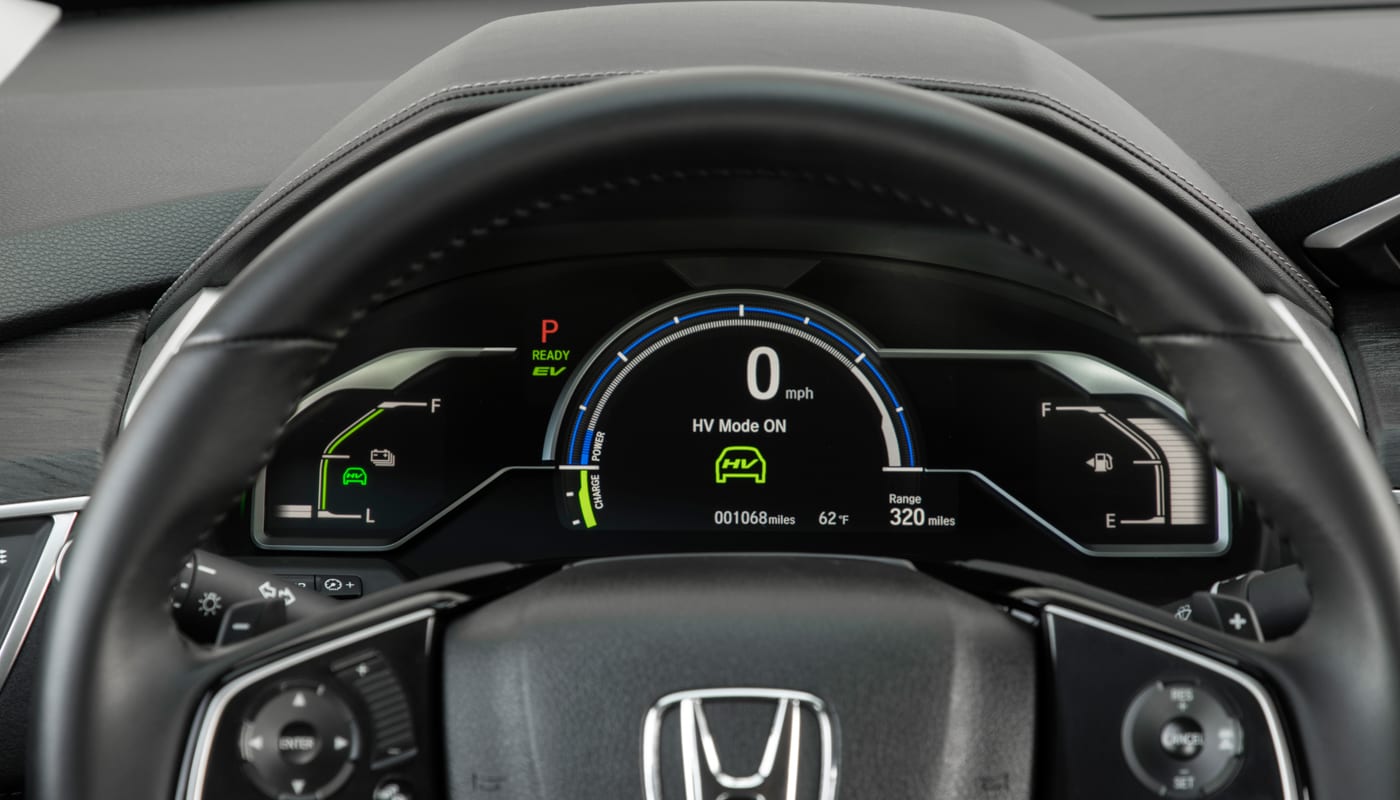 Even if the lane-assist portion of Honda Sense isn't the best on the market, what's nice is that the whole package is standard on all variants of the Clarity line. The only reason to upgrade to the $36,600 touring version of the Clarity Plug-In Hybrid is if you want leather seats, steering wheel and trim, a power adjustable seat and satellite navigation. With CarPlay and Android Auto also standard, it really comes down to your love of leather.

Fortunately, if you're not a fan of CarPlay or Android Auto, Honda seems to have corrected latency that I noticed on the standard infotainment system when I tested the EV version of the car back in July. What's more, the right side blind spot camera also kicks in faster than it did when I test-drove the EV.

Ultimately, the Clarity's design is really the biggest strike against it. I like the front, but as you move toward the back the car starts to look ... odd. Still, if you can get past the looks, the Clarity Plug-In Hybrid is a smooth cruiser with a luxury interior at a midlevel price point. It offers impressive value for anyone looking for a hybrid that doesn't skimp on comfort.

All products recommended by Engadget are selected by our editorial team, independent of our parent company. Some of our stories include affiliate links. If you buy something through one of these links, we may earn an affiliate commission. All prices are correct at the time of publishing.
View All Comments
Honda’s Clarity Plug-In Hybrid is a luxury car at a bargain price