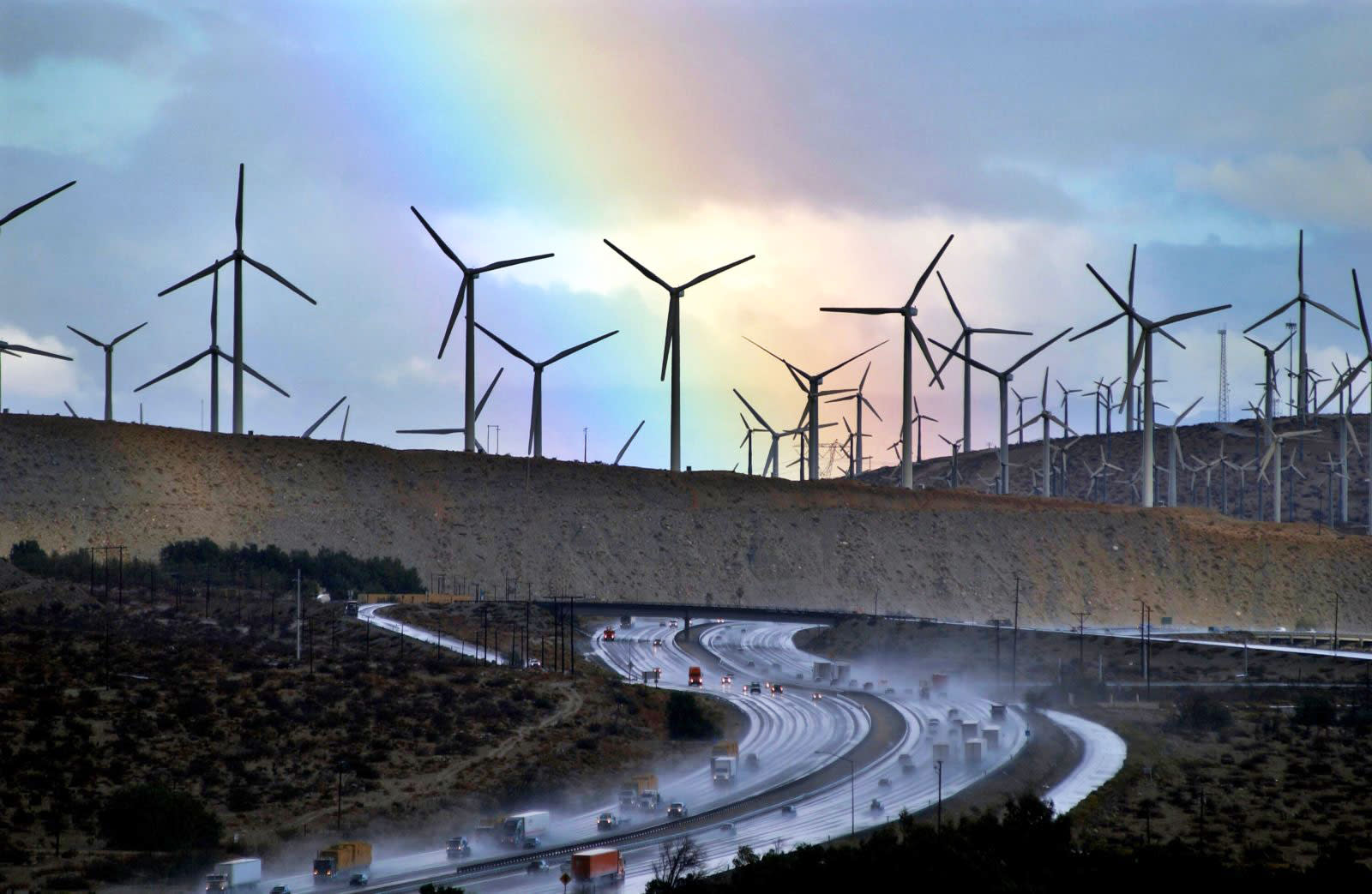 California is both the nation's leading renewable-energy proponent and one of the few states to actually put its power where its mouth is. In November, the California Energy Commission released its annual Renewable Portfolio Standard (RPS) report which found that the state's three investor-owned utilities -- Pacific Gas & Electric, Southern California Edison and San Diego Gas & Electric -- are on track to collectively offer 50 percent of their electricity from renewable resources by 2020. That's a full decade faster than anyone had anticipated.

Reports like these have been used to promote clean-energy production throughout the US and the rest of the world since the 1970s. However, it wasn't until 2002 that California codified the practice. But despite being in effect for only 15 years, California's mandatory reporting has become a potent tool in fighting greenhouse-gas emissions throughout the state. 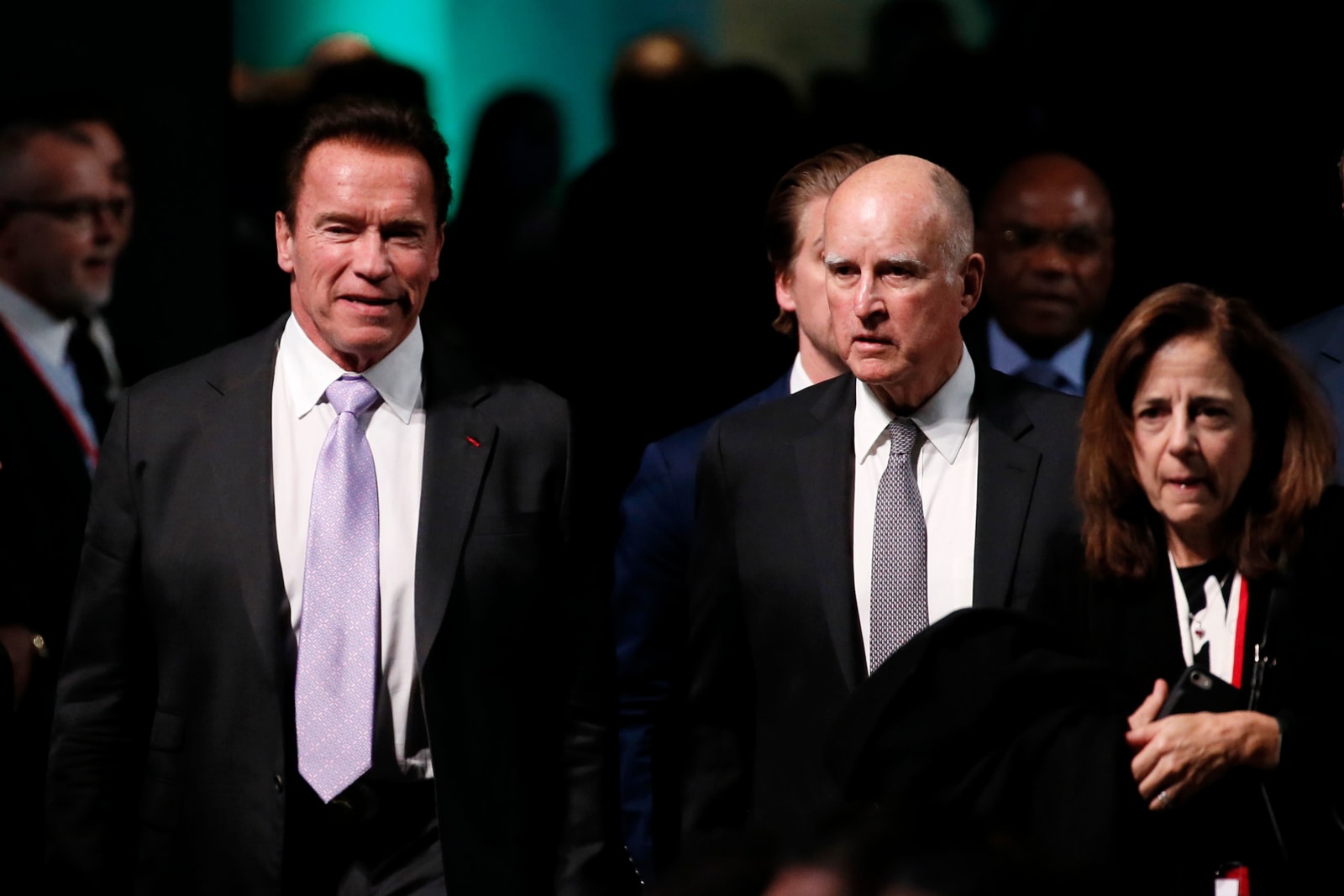 Arnold Schwarzenegger and CA Governor Jerry Brown at the One Planet Summit, Dec '17

"We've got to realize that we are here today because of oil -- oil and gas, to a lesser extent, coal," California Gov. Jerry Brown told the press at a 2015 signing ceremony, where he increased the state's renewable goal to 50 percent. There, he pointed out that California is still the third-most-oil-producing state in the union, behind Texas and North Dakota. "What has been the source of our prosperity has become the source of our ultimate destruction, if we don't get off of it," he added.

And get off it we have. As of last year, 32.9 percent of PG&E's power came from renewable resources, as did 28.2 percent from SoCal Edison and a whopping 43.2 percent from San Diego Gas -- granted, SDG&E is by far the state's smallest investor-owned utility.

And, despite critics' complaints that moving to renewables would stymie economic growth and increase the electric bills of customers throughout the state, it's actually been quite the opposite. In the last seven years, California has seen a massive construction boom in the solar- and wind-energy sectors. The price of solar power has dropped to under $30 in 2016 from around $136 per megawatt-hour in 2008, while wind power prices have fallen to $51 in 2015 from $97 per megawatt-hour in 2007, per the report. Over the same period, the state has seen greenhouse-gas emissions from electricity generation decrease nearly every year. 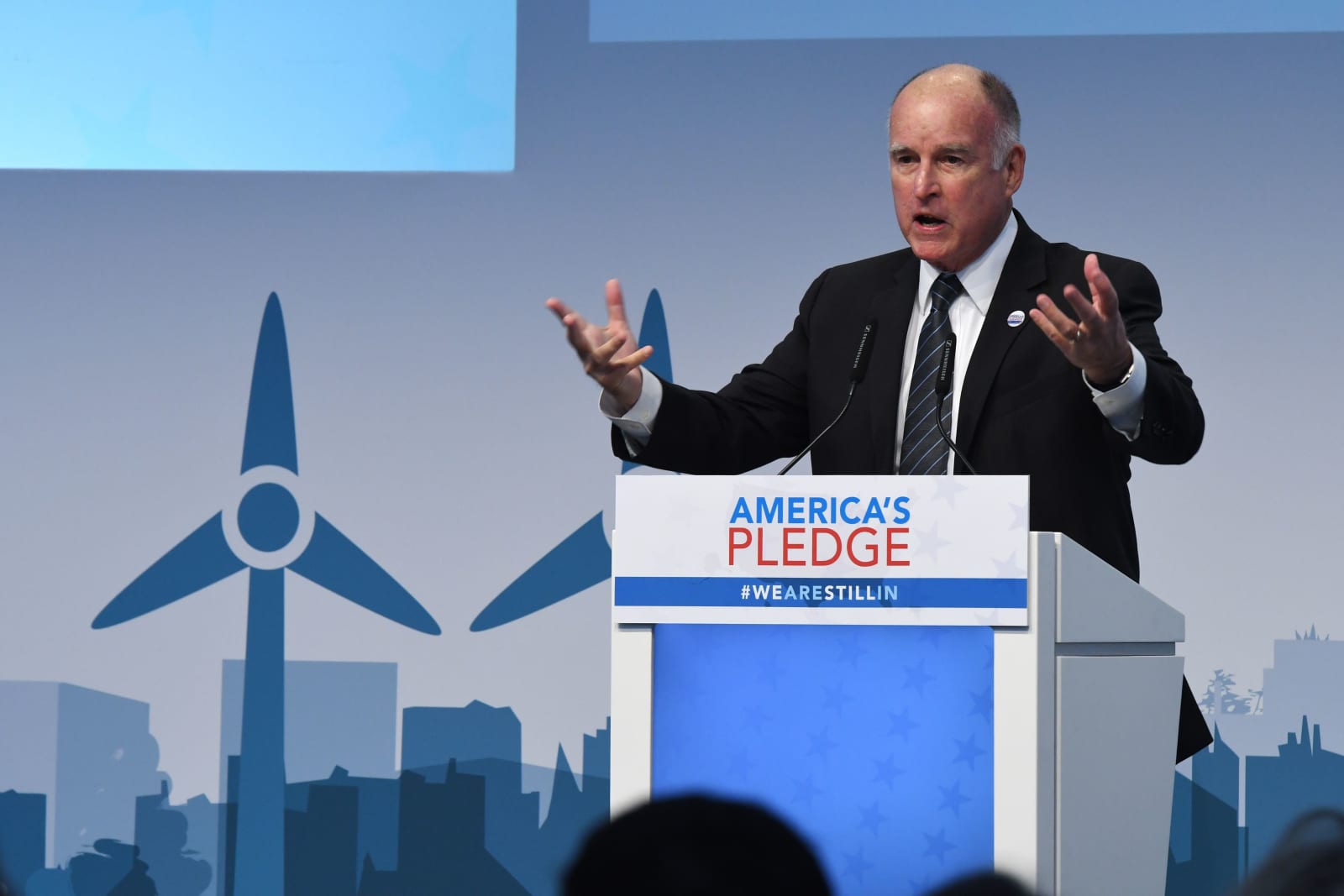 And despite the Trump administration's quixotic quest to make coal happen, California has ratcheted up its own climate-change-response efforts. Of course, California isn't the only state to do so. Hawaii recently passed legislation dictating that a full 100 percent of its electricity generation come from renewables by 2045, while Vermont is aiming to hit 75 percent by 2032.

Granted, both of those states are home to far fewer people than California and therefore require far less energy, so the Golden State is uniquely situated to lead the renewable energy revolution. "California in a lot of ways is a blessed state," said Dr. Austin Brown, executive director of the UC Davis Policy Institute for Energy, Environment and Economy. "We have a wealth of both wind and solar, a lot of historically built hydro that we can use."

That said, California is not -- and cannot be -- in this effort alone. While the state does often produce an excess of solar power in the mornings and early afternoons, utilities often have to resort to gas-powered plants during the evening hours and during times of peak demand. As such, Brown explained, "hydropower is great because it can be used to fill in the peaks and valleys." 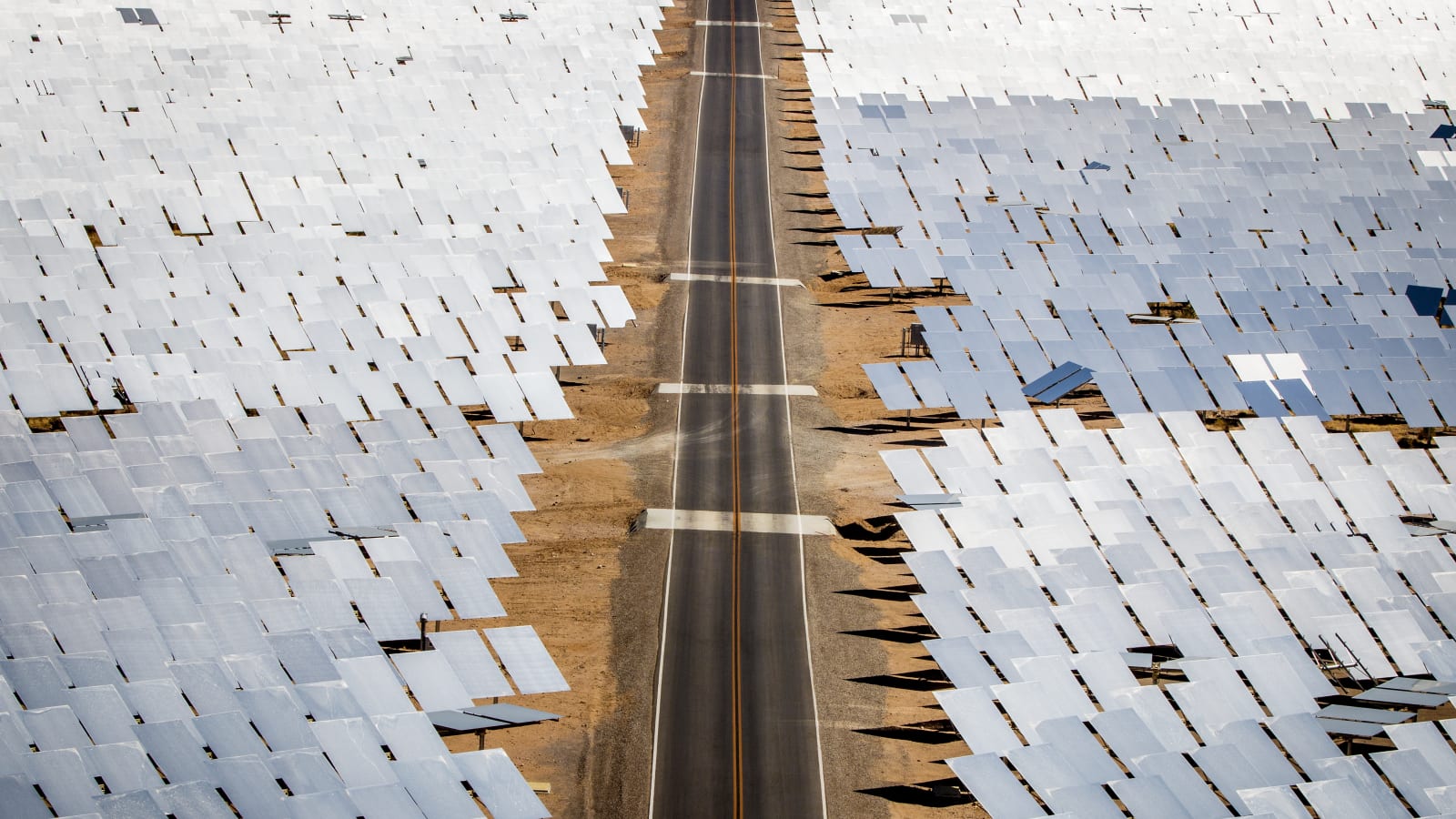 "We have an interconnected grid so I think it would have been foolish to say, 'It all has to be done in California,'" Brown continued. "One of the benefits of the grid is that we're able to trade power -- bring hydro down from the Northwest, bring wind in from Wyoming. These are all really good things."

California's aggressive policies toward renewables also deserve credit. "People want to cast it as a choice between policy or technology as a solution but those should exist hand-in-hand," Brown said. "We would have never gotten renewable energy prices where they are today without really ambitious public policy."

Since 2002, both Gov. Brown and his Republican predecessor, Arnold Schwarzenegger, have continually sought to push the clean-energy standards forward. "It shows the importance of bold goals," Brown declared. "When you put a marker way out there and say, 'We're going to go achieve that, we're going to write this down as a matter of policy and then go do it,' you can accomplish an enormous amount." And now that California is on pace to hit 50 percent renewable by 2020, the state could soon set an even loftier goal: 80 percent by 2050, according to Brown.

"When you get it right, it's this virtuous cycle where policy improves technology and that allows us to go for greater ambition without increasing prices and continuing to reduce unintended consequences," Brown said.

Of course, setting goals and actually achieving them are two very different things. Indeed, the path to 80 percent renewables will pose its own unique challenges. The effects of diminishing returns will soon come into play, Brown explained. "Once we get to about 50 percent, we're going to start to run into new challenges -- the second 50 percent will be trickier than the first 50 percent." Should we continually produce renewable energy at times when there is already excess generation, the value of that energy will decrease, Brown notes. Yes, we could incorporate battery technology such as Tesla's Power Cells or the 50 MW hybrid peaker plant system that installed this past April, but Brown thinks there might be an easier, less expensive alternative. "Storage is probably not the first option you want to talk about when you discuss grid integration just because batteries are still pretty expensive compared to other technologies," he said. Instead, Brown suggested methods such as pre-cooling buildings during times of low demand so as to not place additional strain on the grid during peak hours, or increasing grid flexibility -- that is, increasing the ability to pass power around without congesting transmission lines.

"When you look at it, storage works, but it's probably the last thing in the stack that we want to go to," Brown concluded.

The effects of global warming will pose their own unique set of challenges. With California's temperate climate, residents don't typically need to run their A/C or heaters for months on end as they do in other parts of the country, though that could change as the planet continues to warm.

Daytime energy demands will likely increase throughout California and the Southwest due to the higher temperatures, thereby increasing air-conditioning usage, Brown explained. To a lesser degree, the colder winters should similarly increase heating demands. Brown also fears that we'll see a "significant increase in heat-related injuries and death" as well as other dangerous trends such as the prolonged drought the state recently emerged from and the massive wildfires it currently faces. Energy production will also feel the impacts of climate change. "Solar is dependent on the amount of cloud cover," Brown said. "Wind power obviously depends on wind, and we might see shifting wind patterns in a changing climate," though he's not entirely certain what those changing patterns will look like. Conventional power plants will also feel the effects. As Brown points out, a number of nuclear- and fossil-fuel plants have been temporarily knocked offline in the past few years because the of the heat that knocks their water-cooling systems offline. "It's a threat multiplier," he said. "It takes all the things that are problematic now and makes them much more common."

And while achieving 100 percent renewable energy production is a noble goal, it may not be the most important one for California to focus on. "I think of 100 percent [renewable production] as a bit of a red herring," Brown explained. "If you want 100 percent it should be 100 percent zero-carbon electricity. Climate change is the existential threat, and I don't want to waste time arguing about what's renewable or not. You have to get the carbon out of the energy system as quickly as possible."

In this article: ArnoldSchwarzenegger, AustinBrown, california, Edison, green, JerryBrown, PGE, PreCool, RenewableEnergy, RenewablePortfolioStandard, SanDiego, tomorrow, UCDavis
All products recommended by Engadget are selected by our editorial team, independent of our parent company. Some of our stories include affiliate links. If you buy something through one of these links, we may earn an affiliate commission.