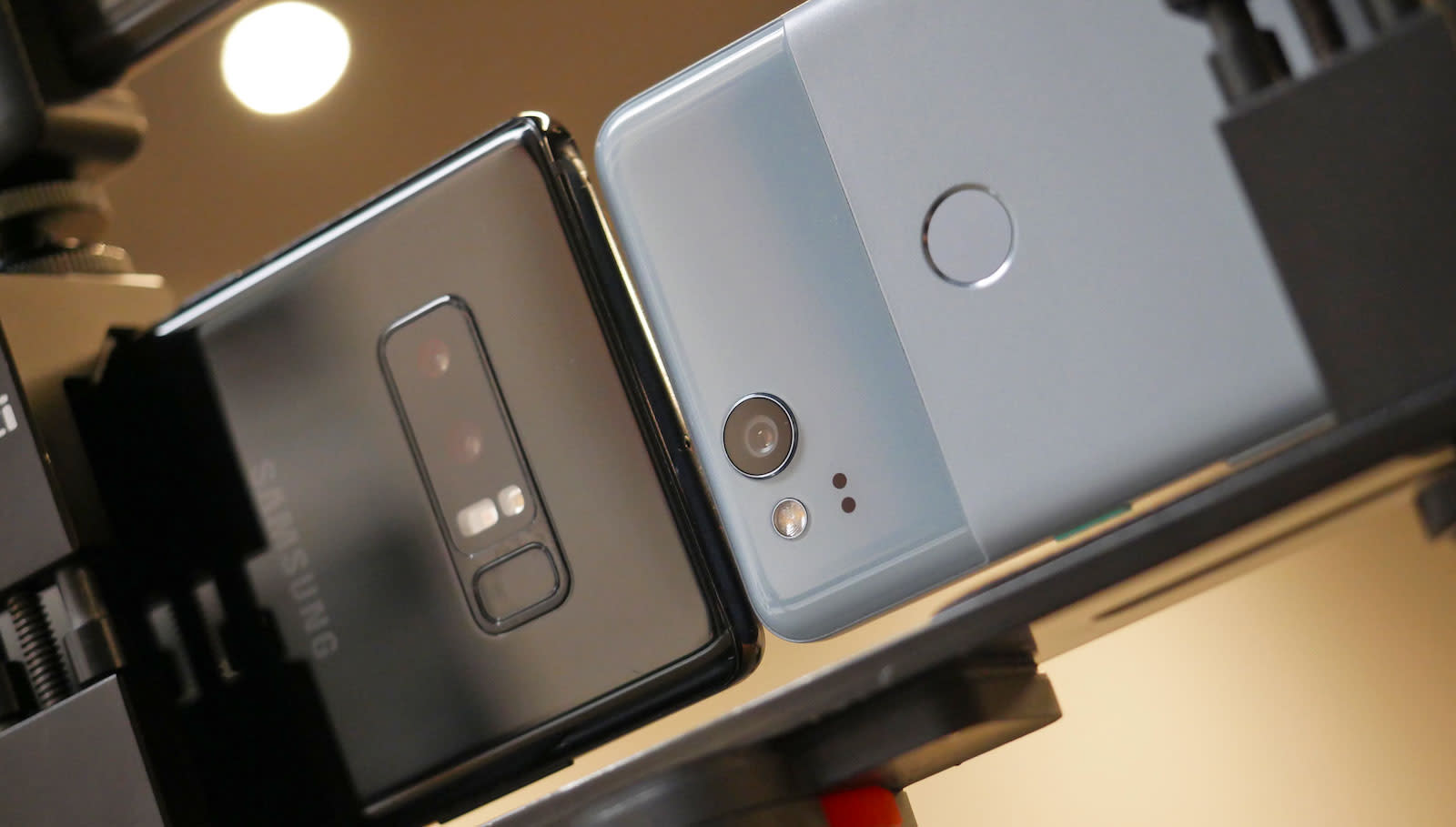 We analyzed the iPhone X, Pixel 2, Note 8 and Mate 10 Pro to see which has the best camera system.

I've been lugging around a DSLR ever since I conned my parents into buying me a Minolta Maxxum 5D in 2006, and let me tell you, that didn't win me any popularity points back in high school -- even if all my friends ended up with amazing MySpace profile pics.

Things are different now. In the strange days between film and digital, nobody was expected to produce quality photography. Now a staggering number of kids want to become YouTubers, and the line between professional and amateur photographers has blurred beyond the point of recognition. But what I know is that for many, a high-end smartphone is a much more sensible purchase than a dedicated camera, no matter what kind of art you're trying to create.

These things are tools, so this comparison is designed to help you pick the right tool for the job. I'm going to compare the iPhone X, the Pixel 2, the Galaxy Note 8 and the Huawei Mate 10 Pro. I've tested these devices in scenarios that are particularly tricky for smartphone cameras and their small sensors: scenes with high contrast, backlighting or substantial vibration.

But before we get into the tests, let's look at what we're working with. The iPhone X and the Pixel 2 did the best in this scene. The iPhone provided a true-to-life rendition of the scene, whereas the Pixel 2 photo looks somewhat artificial. The Pixel 2, though, provided great detail and exposure without noise or sharpening artifacts. Both the Mate 10 Pro and the Galaxy Note 8 crunched the blacks, leaving little detail in the shadows, and the Mate 10 Pro's aggressive sharpening left artifacts in the water. The Pixel 2 and the iPhone X captured nice colors and kept noise to a minimum in all but the most extreme areas. The Pixel 2, however, rendered so much more detail in the architecture -- but once again the results look noticeably artificial. The Note 8 did not fare well here; it's by far the worst in what should have been plenty of light. It's underexposed, there are artifacts in the shadows and I would even say there's some noticeable lens distortion. The Mate 10 is fine, but its 20-megapixel sensor didn't seem to provide any more detail than the Note 8's 12MP module. It's difficult to pick a winner here, and it may come down to taste. The Mate 10 Pro looks the most detailed and the Pixel 2 has a pleasant look overall, but the iPhone X didn't render details or color well and the Note 8 looks bad. I would go with the Pixel 2, because unlike the Mate 10 Pro, it achieves its look without artifacting. That being said, it's great to see an example of the Mate 10 Pro's dual-camera system providing real-world benefits. The Pixel 2 blows everything else out of the water in terms of selfies. The iPhone X comes in a close second and has the added benefit of not making me look 10 years older than I am. There is one important caveat here: The Note 8 (and the Galaxy S8 / S8+) have real focusing mechanisms, whereas most selfie cameras are fixed focus. It's subtle, but because the Note 8 can actually focus on my face, the background is every so slightly blurred. Please, smartphone makers, use a focusing mechanism on the front-facing camera!

All four of these devices include some kind of synthetic bokeh mode that blurs the background around the subject, reminiscent of a DSLR with a wide aperture lens. Sometimes these work well, and in some scenarios they fail pretty bad. The scenes shown here are essentially torture tests: I picked objects with challenging geometry that would show how well these synthetic bokeh modes perform in a worst-case scenario.

Before I go on, there's one piece of essential vocabulary we need to define: the mask. A mask in this context is essentially the outline of the subject, where everything outside the line is blurred. Each device uses different techniques to create the mask: The iPhone X and the Note 8 use dual cameras to size up the subject, the Pixel 2 uses dual sub-pixels and the Mate 10 Pro's technique lives somewhere in software. As you can see in the astronaut-image set, the iPhone X has two errors in its mask: the one on the helmet and the one under the astronaut's right arm. The rest of the mask is pretty good. In the polygonal-sculpture image set the iPhone X almost makes it, but there are several parts of the mask with issues. As for the hardest test, the plant, the iPhone completely falls down.

The Mate 10 Pro surprised me with its Wide Aperture Mode; it's not flawless by any means, but overall the effect looks pretty good. In the astronaut-image set, for example, the mask is well defined except for the area underneath the arm, and at smaller viewing sizes you might not notice this. In the polygonal-sculpture test there are, again, small errors in the mask, but they don't ruin the image. However, when we get to the plant, the Mate 10 Pro can't track all the tendrils.

Both the Note 8 and the iPhone X zoom in quite a bit to achieve their synthetic bokeh effect, and that makes any issues with the mask all the more pronounced. With the astronaut, however, we see much better results than with the iPhone X -- even the area under the arm is properly blurred! Unfortunately things go downhill with the polygonal sculpture, though the issue isn't with the blurring mask -- it's with the exposure. I think this is because I was throwing off the exposure by tapping on a black object, but the algorithm should be able to handle that.

Now, at first glance it looks like the Note 8 completely blew it with the plant, but that's not entirely the case. If you look closely, you can see that the Note 8 is able to isolate the tendrils in the mask, but in the places where the tendrils overlap with the edges of the tables or light furniture in the background, it loses track. Ultimately, the Note 8 failed this test, but it did better than the iPhone X or the Mate 10 Pro.

The Pixel 2 handles the astronaut scene better than the competition. The area under the arm is blurred, though I will say that there are small errors in the mask around the edges. At smaller viewing sizes, however, the Pixel 2 wins here. The polygonal sculpture is also the best out of the four with proper exposure and a good mask around the edges. With the plant we see the same problems as the Note 8, where the mask algorithm loses track of the tendrils as they overlap with a visually similar background. That being said, I think the areas around the tendrils (the ones that aren't glitched out) look better than the same areas on the Note 8.

As long as you stick with simple images of people in good light, the iPhone X will do alright, but I was surprised by how well the Mate 10 Pro and the Galaxy Note 8 performed. The Pixel 2 particularly stood out though; its ability to both capture a pleasing image in its synthetic bokeh mode and its ability to isolate complicated subjects make it the clear winner.

In this test I cycle a set of lights on and off so that we can see how much noise each device renders at varying light levels. There's a light meter at the bottom of the scene, and this allows us to compare noise levels at approximately the same light level. What is a lux, you ask? It's a measure of light in a given area, so one lux is one lumen per square meter. And what is a lumen? It's the amount of light given off by a candle. Listen, I don't make the rules -- I'm just measuring light.

At extremely low light levels (six lux and 40 lux) I am sort of baffled by how well the Mate 10 Pro performs. Sure, it has all kinds of artifacts, but it looks pretty darn good, especially when you compare it to the Note 8, which also has artifacts but looks terrible at these light levels. One thing I am noticing is that at six and 40 lux, the iPhone X is willing to let the scene be dark (which it is) whereas the Pixel 2 is sort of desperately trying to elevate the exposure of the black backdrop, which makes the noise noticeable.

The Mate 10 Pro starts to look decent at 40 lux, which, again, is incredible. The iPhone X, Note 8, and Pixel 2 need more than 540 lux to quell obvious noise.

Here we test the video stabilization of all four devices at the maximum common resolution: 4K at 30 frames per second. I was walking naturally without trying to stabilize with my feet.

The Pixel 2 is the most stable, but the iPhone X does well too. Despite the Mate 10 Pro's great low-light video performance, it doesn't produce stable video. The Note 8 is a curious case, because it does stabilize well, but the video has an aggressive jelly effect that's disconcerting to look at. This goes away at 1080p (as you can see in the video below), but the iPhone X and the Pixel 2 are able to stabilize 4K video without this effect. You can see a similar stabilization test in 1080p below.

One thing you'll probably notice right away is that the Mate 10 Pro and the Note 8 are very zoomed in, and that's because they're using electronic image stabilization, which crops the image in and moves it around to compensate for motion. That being said, the Pixel 2 and the iPhone X are doing this too but without an uncomfortably close mustache inspection, making them the winners.

The Mate 10 Pro managed to surprise me. I think Huawei should ease up on the punchyness of the camera tuning, but the low-light photography, low-light video and portrait mode are awfully good in the right conditions. The Note 8 also surprised me, but with noisy low-light images and video as well as that jellylike video stabilization.

So which smartphone has the best camera? I feel confident giving that honor to the Pixel 2, but as we've seen, each device has pros and cons. The iPhone X, for example, is the only device that offers a native 24fps 4K video option, which is important if you want to mix it with footage from other cameras. But the Pixel 2's HDR still images, unmatched selfie camera, stable video and surprisingly good portrait mode put it ahead of the competition.