People seem to believe that the ability to drive fast makes them good drivers. Folks who drive below the speed limit are also under the same misconception. The reality is, if you're a good driver, you should be able to handle anything that's thrown at you while still treating your fellow drivers with respect. The Mercedes-Benz AMG C63S sedan is a good car not because it's fast (though it is very fast with a zero-to-60 time of 3.9 seconds) -- it's a good car because it delivers everything you'd expect from a high-tech, luxury sports sedan. A luxury sedan that looks and feels the part, equipped with more than enough technology and features to justify its high price tag. It just needs some fine tuning on how to use and access its bells and whistles.

Be the first to review the C63 S (2018)?
Your ratings help us make the buyer’s guide better for everyone.
Write a review

Starting at $73,700, the C63S is out of reach for anyone who punches a clock or works in middle management (unless that management is helping to run a hedge fund). But get behind the wheel, and it becomes clear why the car merits all those extremely high monthly payments and insurance costs. It all comes down to a nearly perfect combination of speed, handling, comfort, technology and design.

Under the hood, the hand-built twin-turbo V8 outputs 503 horsepower and 516 pounds of torque to ensure that even in comfort mode, you have enough power to be the first off the line at the stop light. In the more powerful Sport mode and especially in Sport Plus mode, you should expect to spin the tires a few times at the intersection if you don't respect that beast of an engine.

Handling and tight-gear transitions are governed by the Ride Control sport suspension and AMG Speedshift seven-speed transmission, respectively. Together they helped the car make short order of the mountain roads around Mount Tamalpais in Northern California during my drive. But all that tight cornering comes at the price of a rough ride, even in Comfort mode. It's not horrible, but it's nowhere near as smooth as other luxury vehicles. 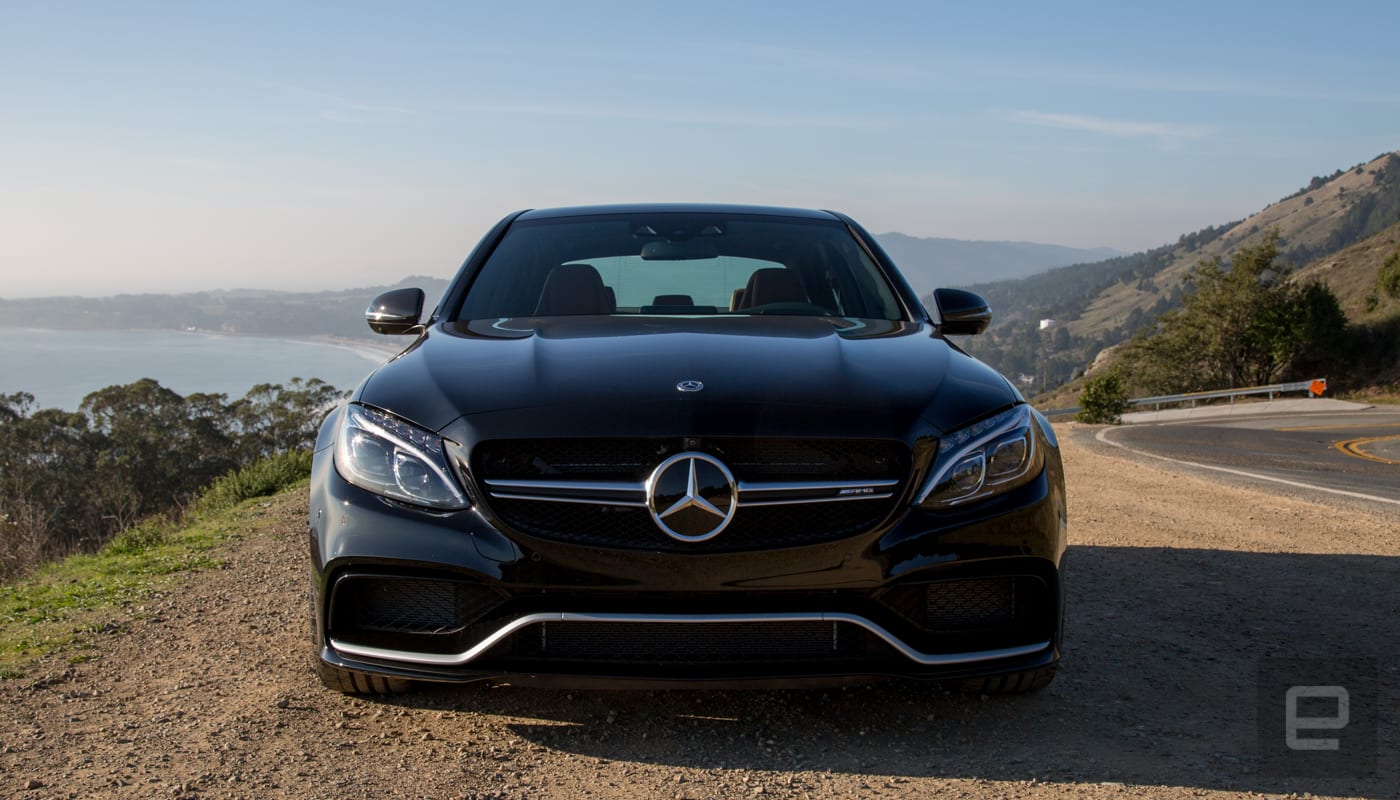 Normally, purchasing a car this powerful means of investing in something that could potentially land you in the hospital. Fortunately, the C63S is packed with safety features to reduce the chances of you ending up in the ICU. Foremost among them is the Distronic Plus driver-assistance suite, which includes adaptive cruise control and steering assist. The car did an outstanding job tracking the vehicle in front of it with the Stop and Go Pilot feature. While stuck in various degrees of gridlock, I found the car's ability to gently come to a stop and resume rolling to be the smoothest and most "human" of all the semiautonomous systems out there. Even when a car cut me off, the Mercedes didn't stomp on the brakes any more than it needed to. Performance was graceful in all situations.

The C63S is also equipped with the Mercedes Pre-Safe braking system that uses data about traffic down the road to get the brakes ready in case of a traffic slowdown. If it determines the car is about to hit gridlock it will help bring the vehicle come to a stop just that much quicker. The Mercedes will also brake automatically when it's about to collide with a pedestrian or another car. I demoed these features during a recent trip to the automaker's headquarters in Germany and was particularly impressed by how well they performed during a rainstorm.

All of these safety measures are wrapped in a very elegant package. It's tough to describe how much more striking the car is in real life compared to photos. It has a low and wide aggressive stance while still retaining an air of civility. It's equally at home on the track as it is on a night out. The interior, though, is bound to be polarizing. It's like sitting inside a stitched-leather Coach handbag. It also has flourishes of metal and carbon fiber throughout the passenger cabin that I enjoy, but others might find ostentatious. 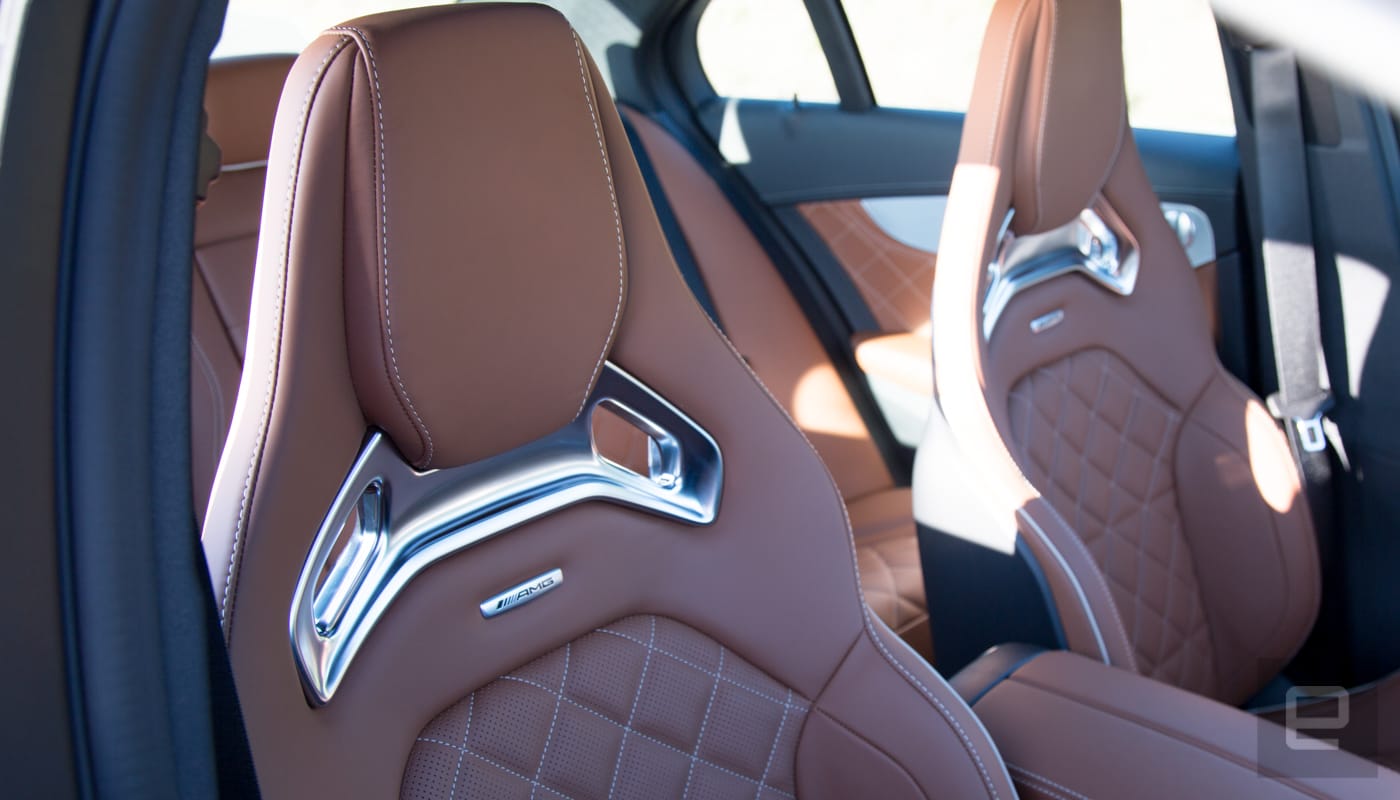 The feature-rich infotainment system in the C63S is packed behind a 7-inch screen. You can access the usual navigation and media integration but also fine-tune how the car drives and sounds. It's one of the best systems out there except for one thing: It has too many controls. Mercedes offers a touchpad and a click wheel to control its infotainment system. That would be fine, but they're stacked on top of each other with the touchpad above the wheel. Both are capable of navigating many features. But it just seems like overkill to have them both, and a few times I inadvertently selected something with my hand on the pad. Either put a touchpad on the click wheel or remove the wheel altogether.

All that said, Mercedes will unveil a new infotainment system at CES, so it'll be interesting to see how they've evolved their system. But for now, the C63S is a top-notch sport luxury sedan with an eye on safety. It combines break-neck acceleration with safety features that keep you from actually breaking your neck.

In this article: amg, c63s, design, gadgetry, gadgets, gear, Mercedes, mercedesbenz, review, sportssedan, transportation, video
All products recommended by Engadget are selected by our editorial team, independent of our parent company. Some of our stories include affiliate links. If you buy something through one of these links, we may earn an affiliate commission.