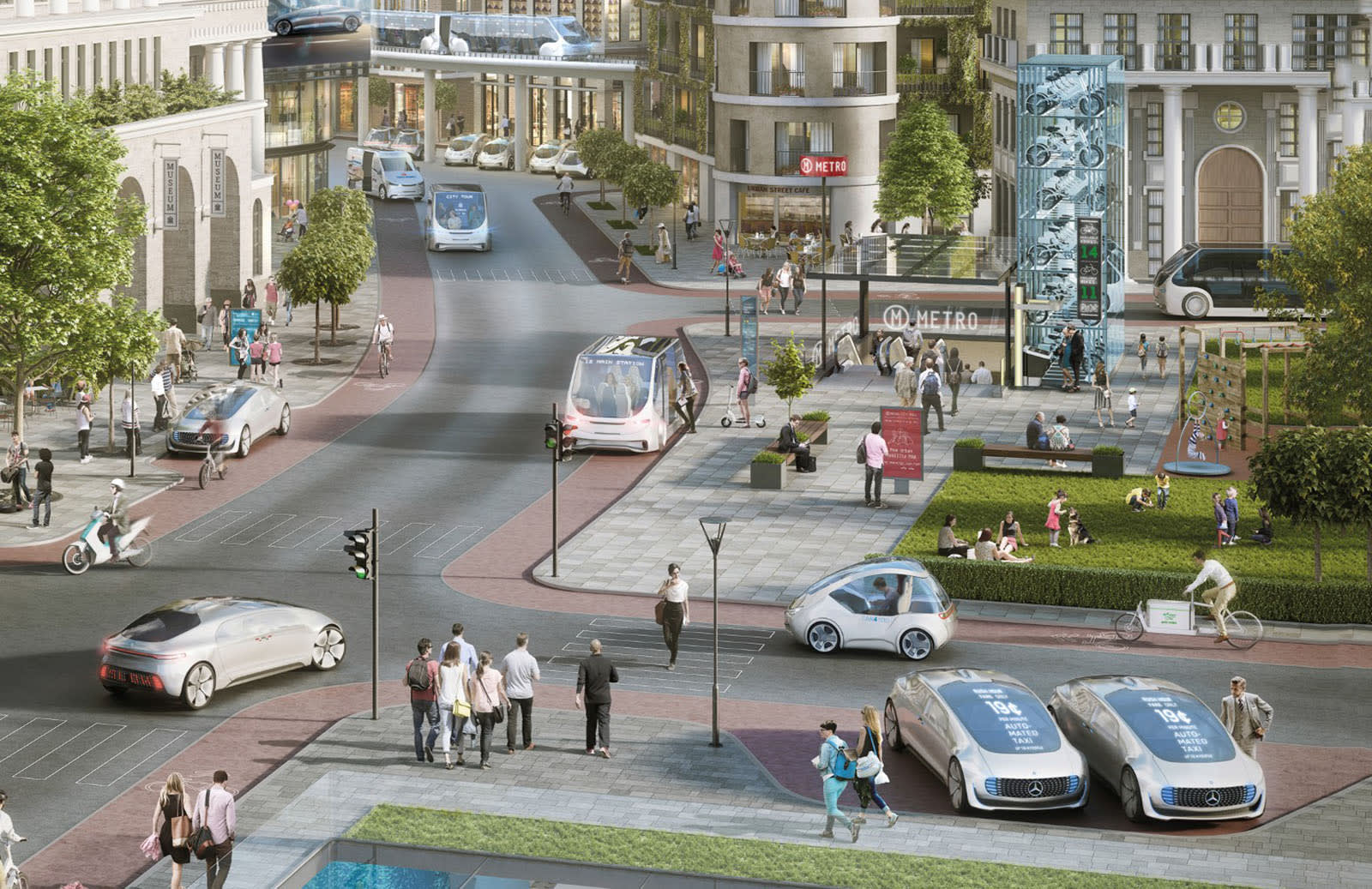 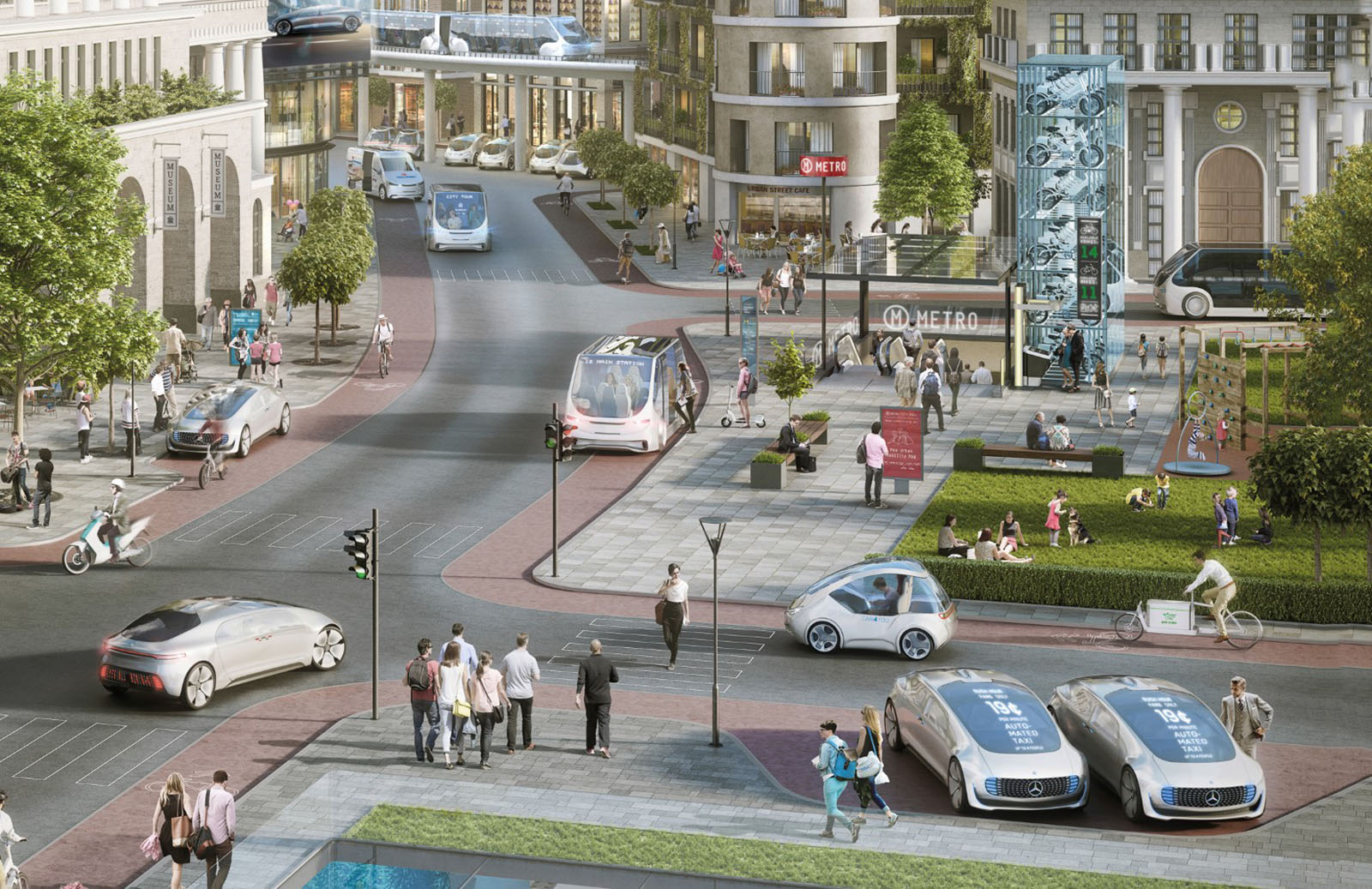 Mercedes parent Daimler has put aside its own project to develop a self-driving car and will now collaborate with automotive supplier Bosch. The two companies plan to deliver fully autonomous "level 5" tech by the "beginning of the next decade," with a focus on city driving and autonomous car-sharing. "It will allow people to make the best possible use of their time in the vehicle and open up new mobility opportunities for people without a driver's licenses," Daimler said in a press release.

The company depicts the future in a fanciful image (above) with self-driving buses, a bicycle tower and its own crazy F015 self-driving car concept. Another (below) shows how you'll call a vehicle via an Uber-style app, then be picked up and delivered to your destination without even seeing a human being ("my dream -- fast transport without having to talk to people," says my colleague).

Despite already being a leader in self-driving tech, Daimler teamed with Bosch to keep its place in the fast-moving a autonomous vehicle game. It figures working with Bosch "should ensure the earliest possible series introduction of the secure technology." The goal is as little as three years out, but it's roughly the same timeframe promised by Ford, BMW, GM, Waymo and others. 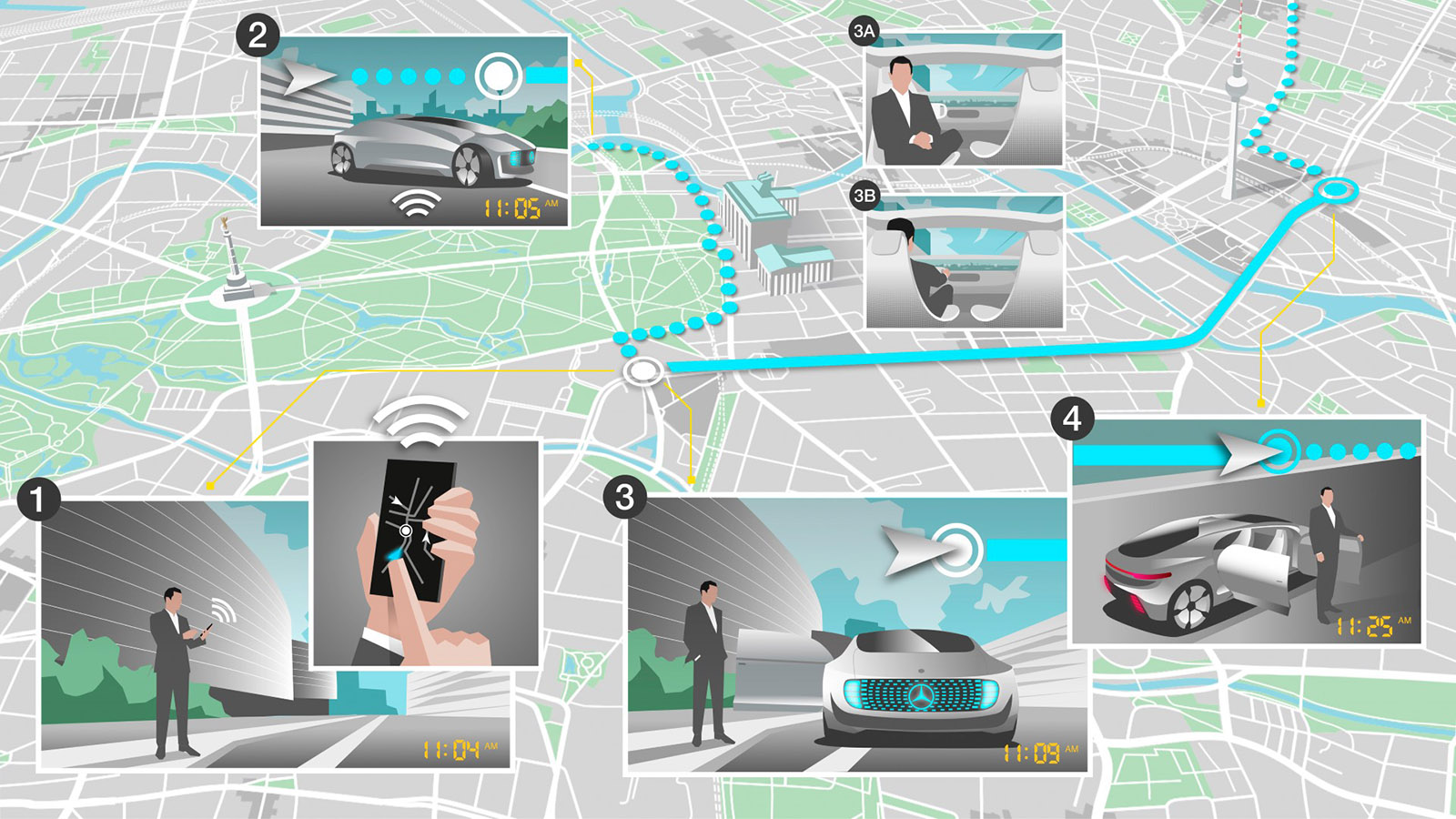 Consolidation elsewhere in the industry likely forced Daimler's hand, too. For instance, Intel recently purchased former Tesla supplier MobilEye for $15.3 billion, while Bosch teamed with NVIDIA to develop its own tech. Other players include Silicon Valley firms like Google's Waymo division and Intel, automakers including Ford, GM, Renault-Nissan and Tesla, and ride-sharing firms like Lyft and Uber. That's not to mention individual suppliers like Velodyne, which makes the Lidar systems used by Waymo and others.

As USA Today noted last month, Navigant Research ranks Ford as the company with the best shot at releasing level 5, fully independent self-driving cars first. The automaker is closely followed by GM, Renault-Nissan and, yes, Daimler -- before it even teamed with Bosch. Waymo, which was the first company to attempt a self-driving car, ranked seventh, Tesla 12th and Uber 16th.

The Uber finding seems reasonable, considering the trouble it's had. However, a Tesla Model X has arguably done the most convincing autonomous demo, driving from an engineer's home to Tesla's head office, and parking, with no assistance at all.

There are currently, of course, zero robotic, human-free taxis on the road, and that won't change until the tech is nearly perfect -- something that could be harder than experts expect. Even by 2020, you likely won't see cars zipping around with no one behind the wheel as depicted by Daimler -- that's when you'll know the future has really arrived.

Source: Daimler
In this article: Autonomous, Bosch, Daimler, gear, Mercedes, Self-driving, TL17SLFDRV, transportation
All products recommended by Engadget are selected by our editorial team, independent of our parent company. Some of our stories include affiliate links. If you buy something through one of these links, we may earn an affiliate commission.