Whether it's your shirt pocket, the zippered compartment in your backpack or a pencil case, existing spots to stow your stylus just aren't as convenient as an on-device dock. And few laptops these days have built-in slots for a digital pen, which is why Samsung's latest convertible laptop is unique. The Notebook 9 Pro comes with a helpful S Pen that conveniently slides under the keyboard for storage. It will be available with either a 13.3- or 15-inch screen. The S Pen that comes with the Notebook 9 Pro is the same one that accompanies the Galaxy Tab S3 and Galaxy Book. It has a fine 0.7mm nib, can detect up to 4,000 levels of pressure and supports Windows Ink as well as the Galaxy smartphones' Air Command. That means you can use the S Pen to sign documents and take notes on the Windows 10 laptop.

I had a chance to play with a 15-inch model of the Notebook 9 Pro at Computex and found the S Pen fluid and responsive as I scribbled notes and highlighted passages on webpages. Even though I found the onboard dock handy, it's difficult to access in tent mode. You'll have to lift the convertible up to remove or reattach the stylus because the slot is under the keyboard and therefore blocked by the table (or whatever surface you've propped it up on) in that position. 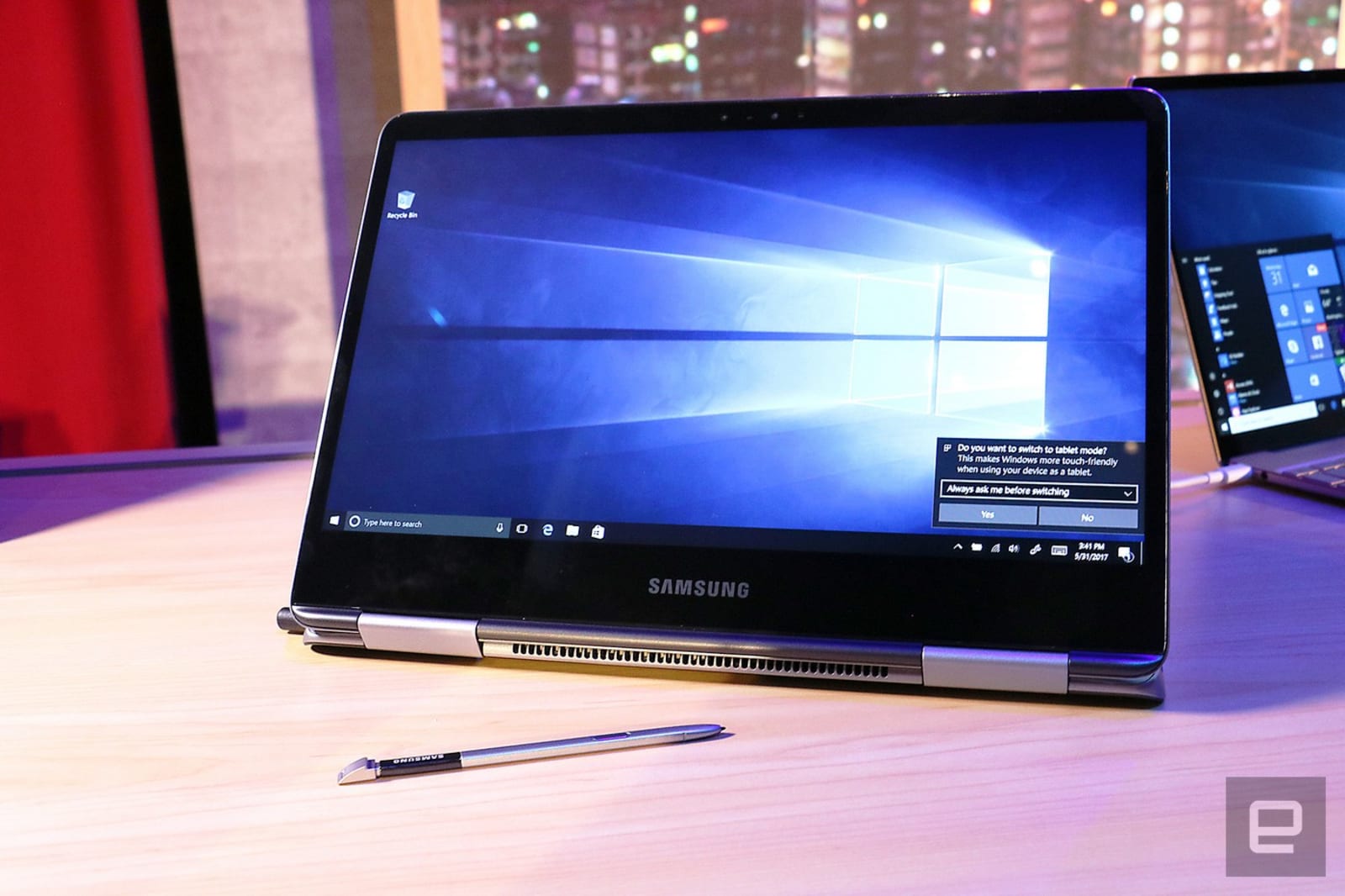 Just like on a Galaxy Note, a panel pops up on the screen when you eject the S Pen from its dock to give you quick access to Air Command or the Windows Ink workspace.

To be fair, many convertibles already support stylus input, including options from HP, Lenovo and Dell, but Samsung's device offers more comprehensive and helpful integrated tools.

Like previous Samsung Notebooks, the 9 Pro also supports fast charging over USB Type-C using a compatible smartphone charger, although the company hasn't provided an estimate for how long it would take to fully power the 54Whr cell. You can also plug it into a portable battery pack to draw power on the go.

Just like the new laptops that ASUS unveiled this week, the Notebook 9 Pro sports a latest-generation Intel Core i7 processor, with boost speeds going up to an impressive 3.5GHz. The 15-inch version also carries a discrete Radeon 540 graphics chip with 2GB memory, while the smaller model uses Intel's integrated HD card. Both screen sizes max out at full HD resolution, and the 15-inch variant looked sharp and vibrant during my brief time with it. I also like its sleek profile for the size, as well as its sturdy metallic build, although its design is plain compared to similar products from ASUS and HP. But my favorite feature is the onboard microSD card slot, which is surprisingly uncommon today.

We don't know how much the Notebook 9 Pro will cost or when it will be available, but S Pen users who need a laptop should keep an eye out for this device to hit stores.

In this article: applenews, Computex2017, gadgetry, gadgets, gear, laptop, laptops, notebook, personal computing, personalcomputing, samsung, samsungnotebook9, samsungnotebook9pro
All products recommended by Engadget are selected by our editorial team, independent of our parent company. Some of our stories include affiliate links. If you buy something through one of these links, we may earn an affiliate commission.