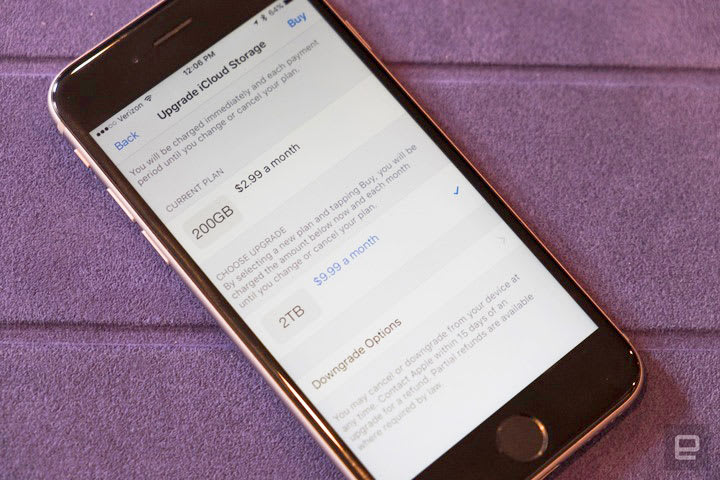 A slew of announcements came out of Apple's Worldwide Developers Conference yesterday including a price drop for the company's 2TB iCloud storage plan. It may not be as sexy as the HomePod, but it's still pretty good news.

The plan's price was cut in half to just $10/£7 per month, which used to be the cost for the now non-existent 1TB plan. Apple's other upgraded storage options are still priced at $1/£0.79 for 50GB and $3/£2.49 for 200GB of space. This now puts Apple's value way ahead of Google Drive and Dropbox at that storage level, both of which charge $10 per month (or slightly cheaper if paid for annually) for 1TB of storage. It'll be interesting to see how Apple's competitors, who have a history of battling it out over pricing, respond to their freshly reduced cost.

For those requiring a ton of storage space, however, you'll still have to turn elsewhere. Whereas iCloud caps out at 2TB, Google Drive offers up to 30TB and Amazon's Cloud Drive gives you unlimited file space for $60/£55 per year. And for free storage, Google Drive is still one of your best bets, offering 15GB compared to iCloud's and Amazon Prime's 5GB and Dropbox's measly 2GB.

Apple's 2TB plan at the new price level is available now and anyone previously subscribed to the 1TB plan has been automatically upgraded.

Via: The Verge
Source: Apple
In this article: amazon, apple, applenews, dropbox, gear, google, internet, services, storage
All products recommended by Engadget are selected by our editorial team, independent of our parent company. Some of our stories include affiliate links. If you buy something through one of these links, we may earn an affiliate commission.