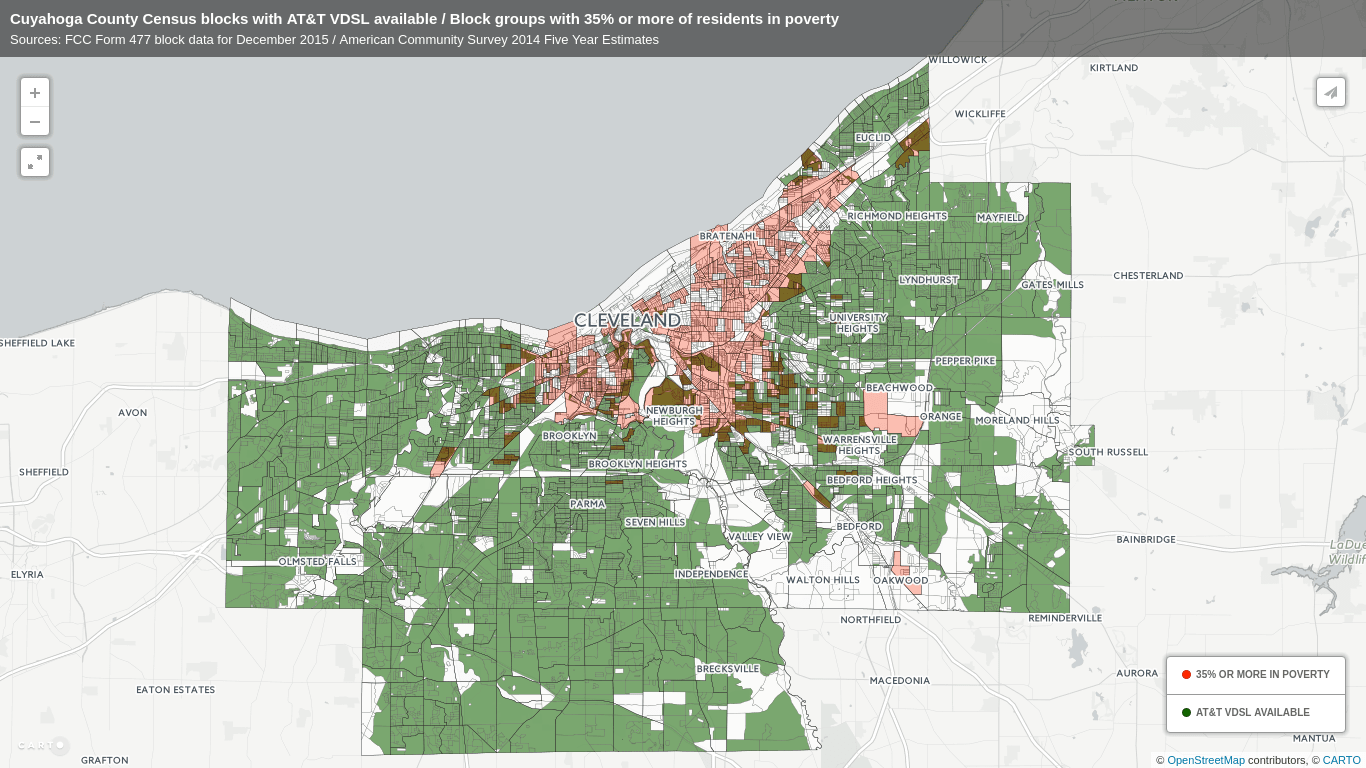 In March, two organizations -- Connect Your Community and the National Digital Inclusion Alliance -- alleged that AT&T had been practicing "digital redlining" in lower income Cleveland neighborhoods. The report released by the groups presented evidence showing that AT&T had not upgraded its broadband infrastructure in those neighborhoods though it had done so nearly everywhere else in the county. Now, a formal FCC complaint has been filed against AT&T.

The complaint, which was filed on behalf of three Cleveland residents who have been subject to the persistently low connection speeds, notes that the affected areas have poverty rates above 35 percent and for many of those residents, their download speeds were as low as 1.5 Mbps. "The analysis shows a clear and troubling pattern: A pattern of long-term, systematic failure to invest in the infrastructure required to provide equitable, mainstream Internet access to residents of the central city (compared to the suburbs) and to lower-income city neighborhoods," said the complaint.

Since the initial report was released, the Cleveland complainants and AT&T did sit down to discuss a way to resolve the issue. But, according to the FCC complaint, the company only offered to deploy a 5G wireless pilot, not upgrade the wired internet infrastructure.

In a press release, the complainants said, "As a result of the ineffectual and substandard quality level of speed, the women's children cannot access homework sites, their home security system that rely on broadband connectivity is rendered useless and they are essentially at risk of being left behind the high speed broadband access gap that leaves so many low income, underserved communities with residents that are persons of color."

In a statement AT&T told Ars Technica, "We do not redline. Our commitment to diversity and inclusion is unparalleled. Our investment decisions are based on the cost of deployment and demand for our services and are of course fully compliant with the requirements of the Communications Act. We will vigorously defend the complaint filed today."

Following the complaint filing will be a hearing where both sides will present their arguments. The Cleveland residents are seeking damages and a permanent injunction "prohibiting AT&T from engaging in the discriminatory and anticompetitive conduct and practices."

Via: DSL Reports
Source: FCC Complaint (1), (2)
In this article: att, broadband, digitalredlining, Discrimination, FCC, gear, internet
All products recommended by Engadget are selected by our editorial team, independent of our parent company. Some of our stories include affiliate links. If you buy something through one of these links, we may earn an affiliate commission.