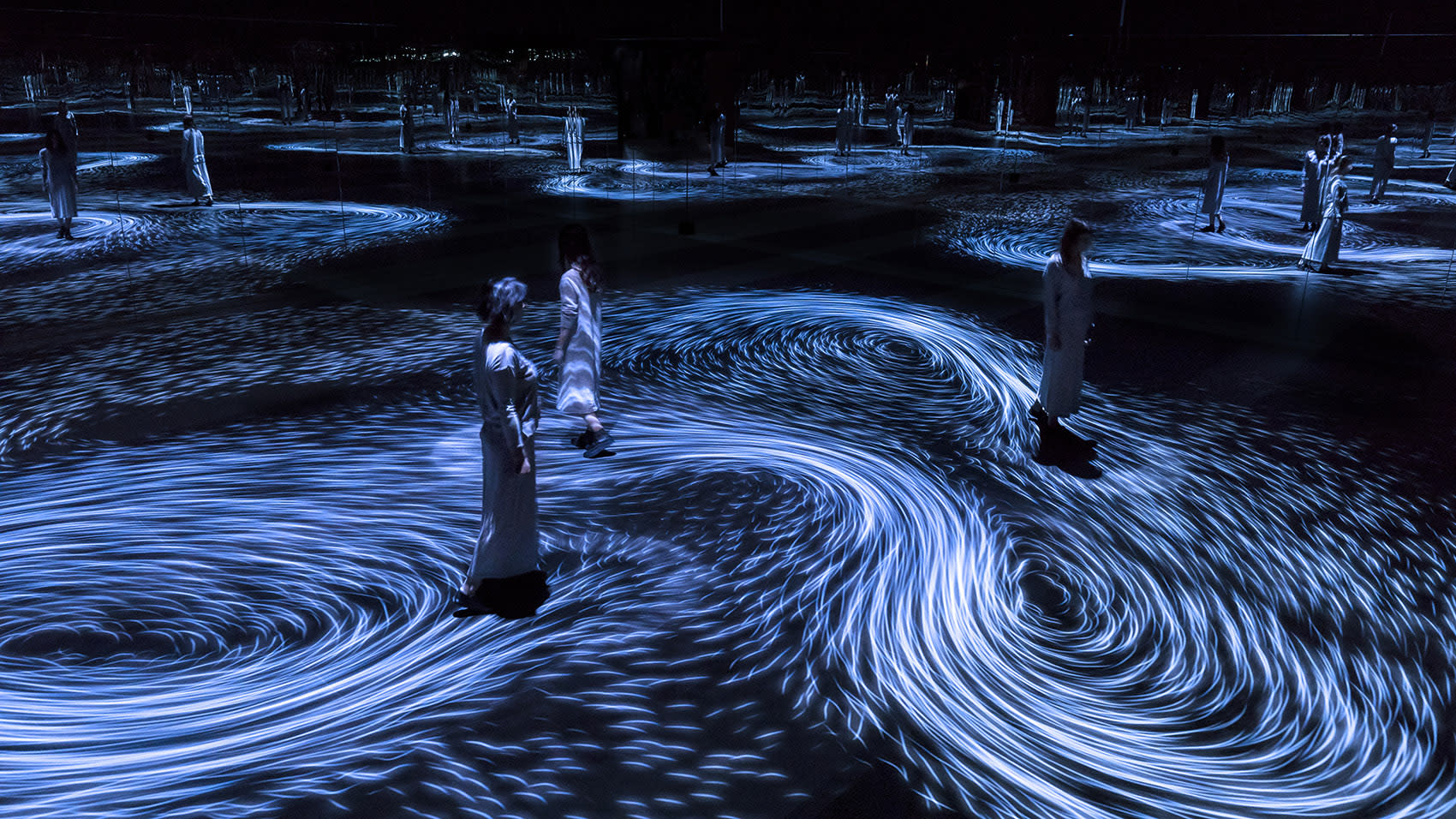 Making your own waves in the 'Vortices' art installation

Technology allows you to experience art in a direct way by physically becoming part of the exhibition, and TeamLab is on the forefront of that movement. The Japanese art collective is at it again with a new exhibition at Melbourne's NGV (National Gallery of Victoria) Triennial called Moving Creates Vortices and Vortices Create Movement. It's a hypnotic melange of art, interactivity and spectacle that shows how humans impact their environment and vice-versa.

The technology is similar to what we've seen with Microsoft's RoomAlive and from companies like Theoriz, using sensors and projectors, and crunching everything with a powerful computer. However, TeamLab's execution is particularly effective and poetic.

When you move within the large space at the NGV (made larger by mirrors on the walls), the sensors track your location and send a signal to the computer. A computer generates a stream of particles that follow you via a projection on the floor. "The faster the person moves, the stronger the force is applied in that direction," TeamLab explains in a press release. "If a person is not moving or there are no more people, no flow will occur and nothing will be present in the space."

Once there's enough people and movement, the streams form into vortexes, much like they would in nature. "In the ocean, complicated terrain such as an island produces flow velocity difference and a vortex is generated," TeamLab says. "Vortices swirl up the carcasses of organisms sunk to the bottom of the ocean, producing nutritious seawater. This becomes a source of nutrition for plankton to grow and nourishes the sea life. Vortices therefore contribute to enriching the ocean."

The artwork plays with the idea of the "butterfly effect," in that seemingly small actions can become big effects down the road. The vortices can dramatically grow in size and force, their effect amplified by the mirrors and large space.

"Through their own movement, visitors realise that seemingly unrelated things affect the world in an uncontrollable way," TeamLab founder Toshiyuko Inoko told Wallpaper. "We want to create an experience where people's various behaviors create diverse flow velocity, generating huge vortices –- whether you intended to do so or not."

All products recommended by Engadget are selected by our editorial team, independent of our parent company. Some of our stories include affiliate links. If you buy something through one of these links, we may earn an affiliate commission. All prices are correct at the time of publishing.
View All Comments
Making your own waves in the 'Vortices' art installation