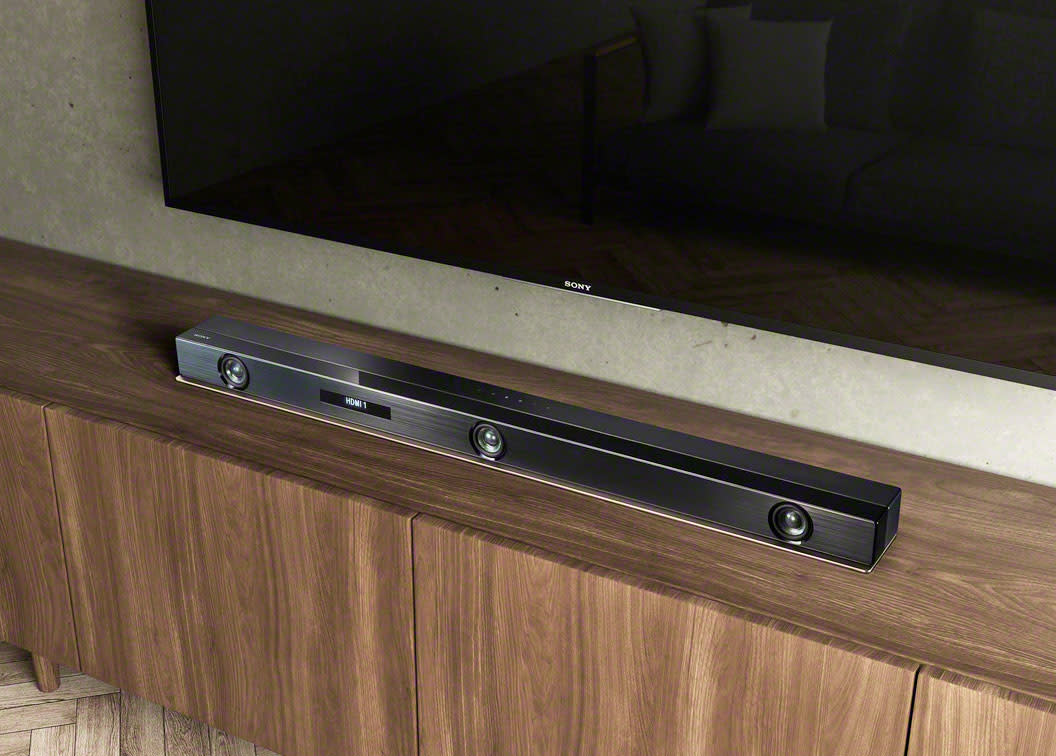 Sony always makes home audio products a part of its CES presentations, and 2018 is no difference. Perhaps most notable are the HT-Z9F and HT-X9000F, two soundbars that include Dolby Atmos surround sound. Of course, true Atmos requires overhead speakers, and these are just 2.1(HT-X9000F) and 3.1 (HT-Z9F) soundbars. As such, this requires some virtualization, which happens courtesy Sony's "virtual surround engine," which the company claims can replicate the wide soundstage Atmos provides. And regardless of whether you're watching content mixed for Atmos or not, the more expensive HT-Z9F include a "Vertical S" button that Sony says will provide virtual 3D sound. The HT-Z9F will retail for $900/£600 and the HT-X9000F will cost $600/£450 when they arrive this spring. If virtual Atmos sound doesn't cut it for you, Sony is also introducing the SS-CSE Dolby Atmos speakers, which are meant to be placed on top of either the SS-CS3 bookshelf speakers or the SS-CS5 standing floor speakers. They'll really work with any speakers you have, but naturally they're a better physical fit with Sony's own hardware. They fire audio upwards to reproduce the sound of the ceiling-mounted Atmos speakers you'd find in a theater; you'll need a compatible receiver, though. Sony doesn't have pricing for these speakers yet, but they'll also be available in Spring 2018. Between these new speakers, Sony's existing home theater speakers and its STR-DH790 receiver, you can get a full Atoms-Capable home theater solution from Sony. It won't be cheap, though.

Finally, if your needs are a bit more modest, the compact HT-S200F soundbar might fit the bill -- Sony is billing it as a more compact audio solution. It has a build-in subwoofer and also offers virtualized surround sound; it also includes a USB port for playback from devices other than your TV. Like the rest of Sony's new speakers, this won't be available until the spring, but there's no word on pricing just yet.

In this article: atmos, av, ces2018, dolby, dolbyatmos, gear, home theater, homeaudio, sony, surroundsound
All products recommended by Engadget are selected by our editorial team, independent of our parent company. Some of our stories include affiliate links. If you buy something through one of these links, we may earn an affiliate commission.