Nobody expected NVIDIA to get into the big screen TV world, but that's precisely what it's doing with its new Big Format Gaming Displays (BFGD). They're 65-inch 4K screens oriented more at games than movie viewing, with heaps of technology that players will appreciate, like low latency, G-Sync and NVIDIA's Shield built-in. We got a look at Destiny 2 being played on HP's set (more are coming from ASUS and Acer), and I can confirm that it delivers one of the smoothest gaming experiences I've seen yet from a big-screen TV.

I've played the PC version of Destiny 2 on 4K G-SYNC computer displays before, and based on my brief glimpse at HP's BFGD, it looks almost indistinguishable from high-end gaming monitors. The image was bright, with strong HDR highlights (it supports up to 1,000 nits). Colors also appeared detailed and vibrant, thanks to its full DCI-P3 gamut support. Mostly, though, I was impressed with how smooth Destiny 2 felt. That's partially due to G-SYNC, which helps avoid stuttering and other issues. The screen also features a high 120Hz refresh rate, so it'll be able to natively handle up to 120 FPS without issue. 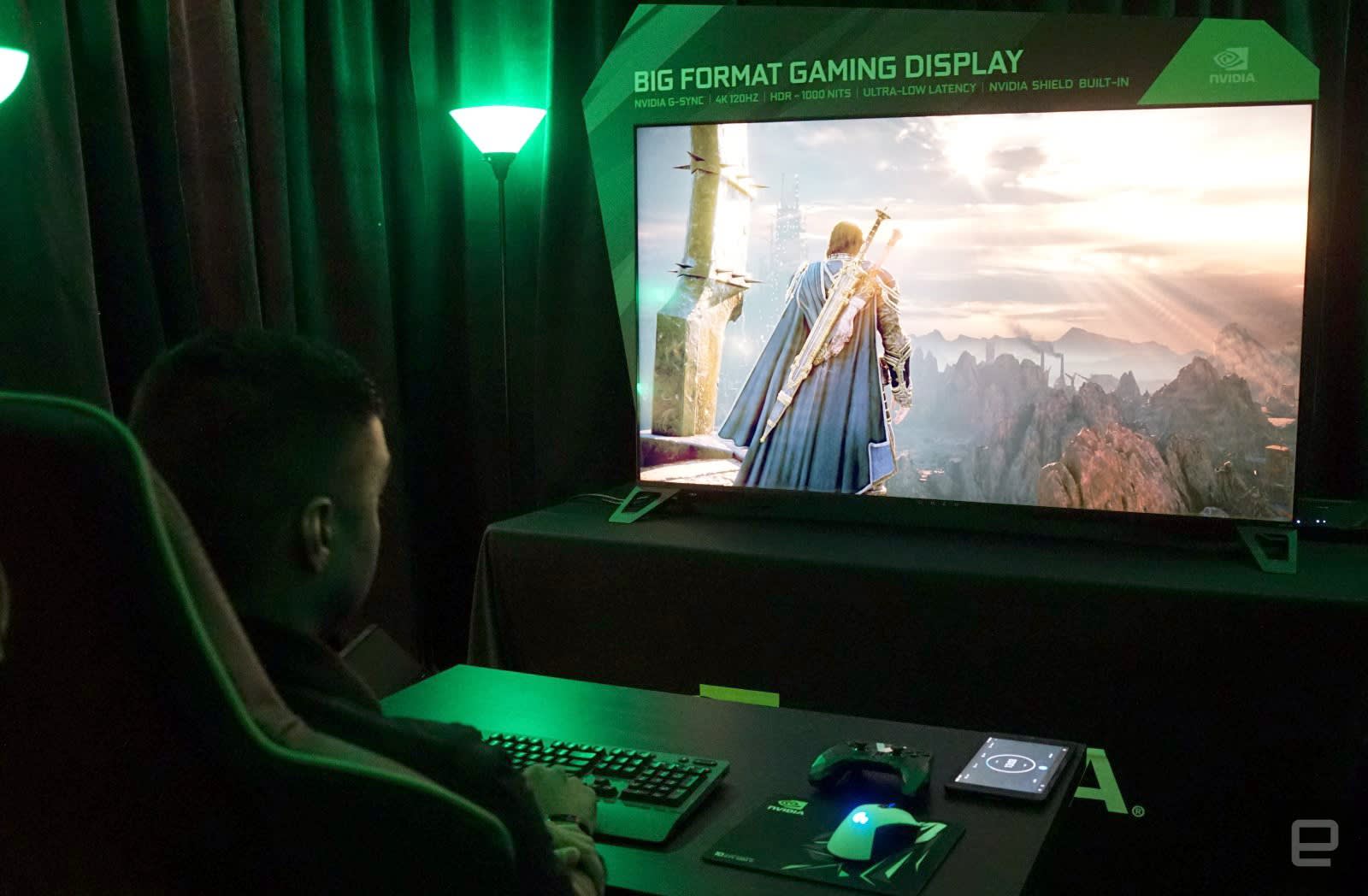 While it might be disappointing that NVIDIA is leaning on on LED technology in the era of big-screen OLED, it's still among the best LEDs we've seen. It features panels from AUO with quantum dot enhancement, like Samsung's QLED lineup. And it supports full-array backlighting, which means it'll offer decent black levels and even lighting. The demo I saw didn't have many dark areas, but from what I could tell, they appeared to be pitch black and not just a very dark shade of gray.

NVIDIA sees these screens as something that would be ideal for a gamer den -- especially for the sort of players who are disappointed with latency issues from typical TVs. While their initial renders showed it sitting on a computer desk, like a typical monitor, the company admits that you'd ideally be sitting four-to-five feet away. In our demo, the TV was set up on a table against the wall, while the mouse and keyboard were on a smaller desk about four feet in front of it. And of course, it was accompanied by a gamer chair.

At this point, HP's BFGD seems like a solid screen for gaming. But until we have pricing information, which won't arrive until the summer, it's hard to tell if they're actually better options than a traditional 4K TV. For one, NVIDIA's sets don't have Dolby Vision, which means you won't see some HDR movie releases at their best. And since NVIDIA is positioning them as premium displays, they'll likely cost as much as high-end LCDs (think around $2,300 for 65-inch sets). In that case, most people would definitely be better off with something like TCL's $650 55-inch P-series TV.

As for GeForce Now, it's even better than when I used it to stream The Witcher 3 on a MacBook Air last year. In 2018, it's finally making its way to PCs after, after missing a launch last year. Players in the US and Europe will still have a hard time getting getting into its beta group, but if you do, you won't have to pay to use it. NVIDIA says it's still working out how it's going to charge people for the serivce. It's also adding support for Ubisoft games via Uplay, in addition to Steam, and it's adding more data centers to speed up performance.

To really show off the power of game streaming, NVIDIA demoed Playerunknown's Battlegrounds running on two $400 Acer Swift 1 laptops side by side. Over GeForce Now, the game looked great and felt almost as responsive as my gaming desktop (the service supports 1080p up to 120FPS, and it's powered by servers running GTX1080Ti GPUs). And, not surprisingly, its integrated graphics barely mustered 2FPS natively. Even more impressive, I played Rainbow Six Siege on a $200 HP Stream, and it performed incredibly well. There was no hint of delay, and the 1080p rendering appeared almost magical on such a budget laptop.

For now, GeForce Now seems more like an experiment by NVIDIA to prove the viability of game streaming. After all, who wouldn't want to play high-end games on their older machines? The real test will be to see how well it performs after it opens up to even more people.

All products recommended by Engadget are selected by our editorial team, independent of our parent company. Some of our stories include affiliate links. If you buy something through one of these links, we may earn an affiliate commission. All prices are correct at the time of publishing.
Hands-on with NVIDIA's giant gaming displays and GeForce Now on PC
BFGD
bigformatgamingdisplays
CES
CES2018
gadgetry
gadgets
gaming
gear
HP
nvidia
personal computing
personalcomputing