It's easy to feel a bit disillusioned with all the hype around augmented reality. We've seen basic examples of AR take off, with apps like Pokemon Go, but that's not exactly immersive. AR glasses, meanwhile, are still finding their legs. But Realfiction believes there's another approach: its large 64-inch screen called DeepFrame. It basically takes the AR experience we've seen from things like Meta's glasses and transforms it into something that a whole crowd of people can see. While it's not something you'd ever get at home, it could change the way we interact with stores and museums.

Like other AR solutions, DeepFrame relies on optics for its magic. It actually reflects the output from a display in front of it -- in my demo, it was from a 65-inch 4K OLED. The DeepFrame itself doesn't have any electronics. With this setup, you'll be able to scale the resolution of what the screen shows just by upgrading your source display (for example, an 8K TV would be even sharper). In addition to the standalone DeepFrame, potential customers can also embed it into an existing window or structure.

So what can you do with a screen like this? Since its main focus is on AR, it's entirely meant to bring digital objects into the real world. I saw a CG velociraptor hopping around the screen, and I was surprised by how sharp it appeared. It wasn't exactly lifelike, but it looked like it was almost in the room with me. I also briefly chatted with Realfiction CEO Clas Dyrholm through the display (he was in a separate room), which felt like chatting with a Star Wars hologram. At one point, he made the dinosaur instantly appear alongside him, something that looked like it would take hours of rendering just a few years ago. 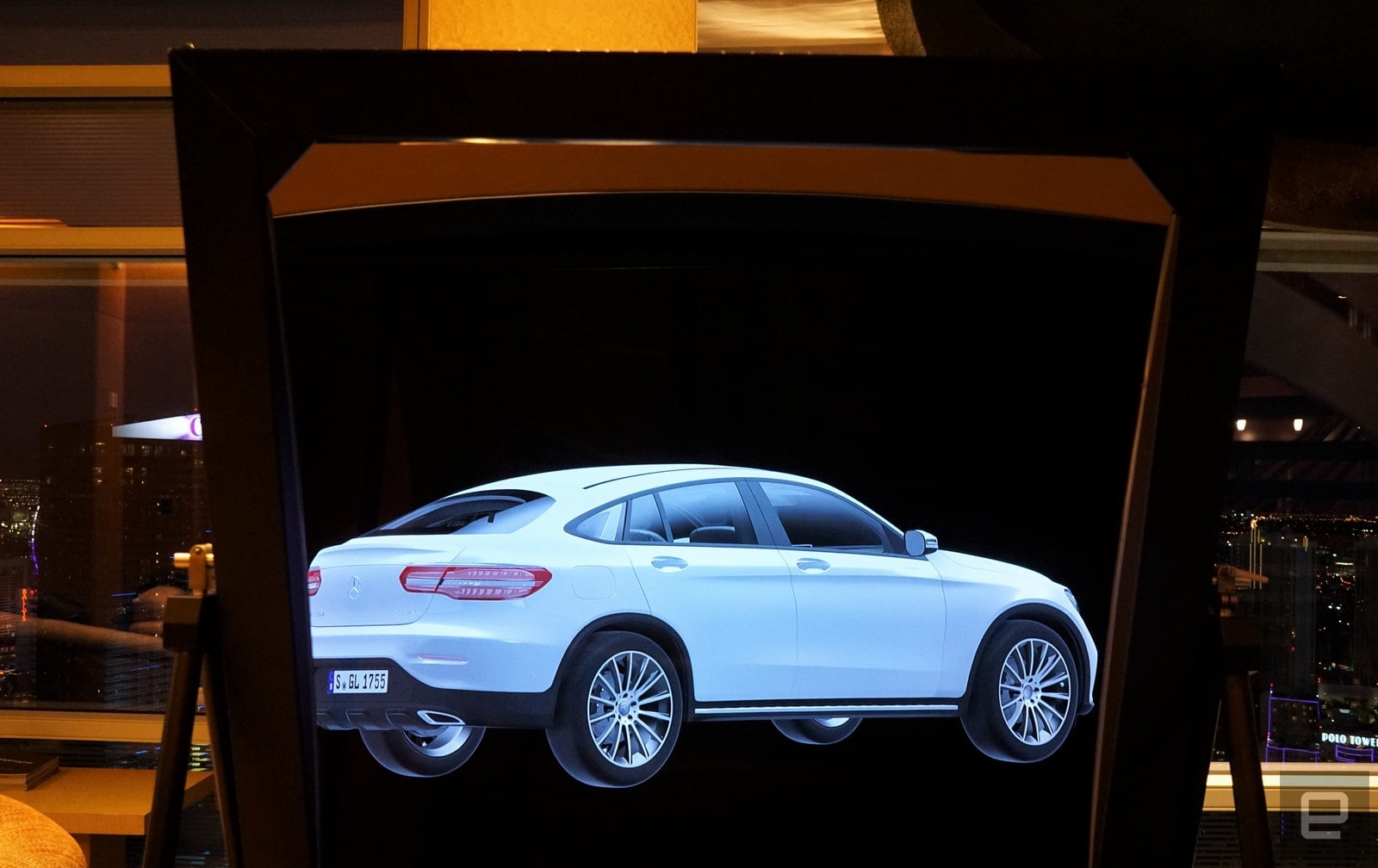 Realfiction has been delivering limited holographs to stores for years, but Dyrholm sees DeepFrame as a huge step beyond that. It's something museum guides could use to interact with digital objects and characters, giving attendees a size comparison between them and a giraffe, for example. In stores, customers could use the display to interact with expensive or hard-to-find items. As one example, Realfiction created a demo for a car company that doesn't have show-floor space for actual cars. Instead, customers can use DeepFrame to take a look at new vehicles and even customize them in AR with a mobile app.

I also briefly went behind the scenes to turn myself into a DeepFrame hologram. For the most part, I was surprised by how simple the company's setup was. In the room next to the display, there was a Canon DSLR capturing video and pushing it through a gaming laptop, which then processed it into AR imagery. A small webcam in front of the DeepFrame itself let me see who was watching the screen, and I was able to chat with them through a microphone. A small remote let me turn my holographic-AR stream on and off and also make the velociraptor appear beside it.

Experiencing DeepFrame was enough to make me think it has potential. It gets rid of the cumbersome-equipment requirement for AR and instead gives us a simple window into the digital world. While the company isn't talking about exact pricing yet, Dyrholm said customers should be able to get DeepFrame up and running for about $50,000 to $60,000. Obviously, that's far out of reach for most potential buyers today, but there are certainly deep-pocketed early adopters who might take the leap.